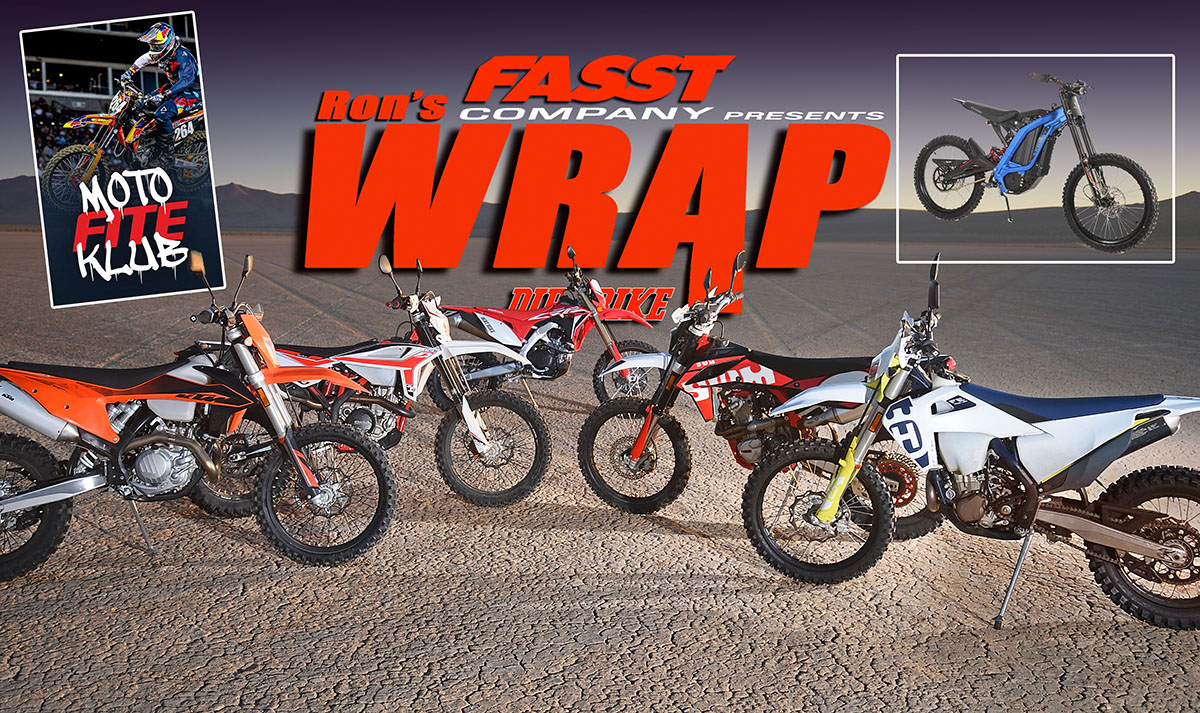 We’ve been working on the 2020 500cc Dual-Sport shootout for three months now, and we’re  getting closer to a conclusion. No need to rush, though. We could really ride them every day for another three months before we’re ready. Here’s how things are shaping up. 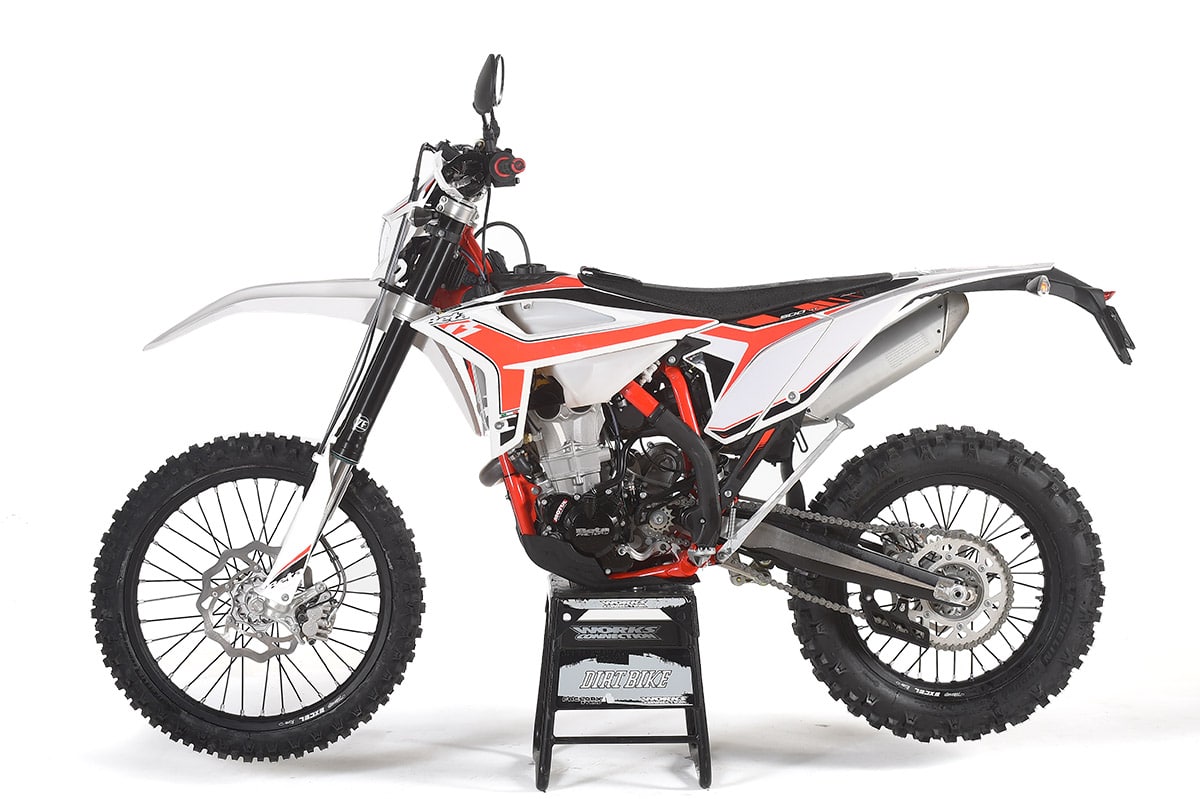 The 2020 Beta 500RR-S got a redesigned motor with a relocated crankshaft and clutch. It actually displaces 478cc, just like before. Suspension at both ends is by Sachs. The frame is new for 2020, too, but remains steel construction with a central backbone. Along with the new bodywork is a new tank with 2.4 gallons of capacity. It has a hydraulic clutch, oversize bars, Nissan brakes and Michelin tires. Plus, it comes with a Trail Tech Voyager GPS. In stock trim without fuel in the tank, the Beta weighs 250 pounds. It sells for $10,899.

The 2020 Honda CRF450L is completely unchanged. The fork and shock are the same as the Showa units that come on the MX bike, aside from spring rates and set-up. The motor has lower compression and is in a much milder state of tune with a tamper-proof EFI unit. It also has a six-speed gearbox, full DOT equipment and a single-sided muffler that is ultra quiet. The headlight, blinkers and tail light are a notch above anything else in the group. The Honda is no lightweight. On our scale, the CRF450R weighs in at 278 pounds without fuel. The Honda is the only bike in the group without oversize bars, handguards or a hydraulic clutch. The price for 2020 is $10,399.

Husky’s big dual-sport is much more closely related to the company’s motocross model than is the case with the others in this group. The Husqvarna uses linkage for the rear suspension, which is a major difference between it and the KTM. It also separates itself from the KTM with an integrated subframe/airbox, Magura clutch and brake components and a  number of parts suppliers. The 501 does, however, have a six-speed gearbox and full street equipment. It’s super quiet and it passes all the proper emission tests without any intrusive and awkward charcoal canisters or smog pumps hanging off anywhere. The FE501S chassis uses the WP shock and Xplor coil-spring fork.  It comes in at  248 pounds without any fuel but with both mirrors. It is the most expensive in the group at $11,499.

The 2020 KTM 500EXC has undergone a moderately significant redesign, although it doesn’t look that different at a glance. It got a PDS version of the stiffer frame that most KTMs and Husqvarnas got in 2019. The motors of the Husky and KTM are identical. They both got a more compact head like that of the 2018½ Factory Edition, they both use the reed valve in the intake boot and they both have the Xplor fork, which has been reworked for 2020. The KTM uses Brembo brakes and a Brembo master cylinder for the hydraulic clutch. It comes in as the lightest of the group at 244 pounds without fuel, and only slightly less expensive than the Husky at $11,399.

The 2020 SWM RS500 is a direct descendant of the 2006 Husqvarna TE450. After the KTM take-over of 2013, the old Husqvarna factory was reopened by SWM, and it started producing Italian-era Huskys under a new name. The RS500 has a modern Mikuni fuel-injection system, KYB suspension and has been beefed up in a number of ways. The bike has top-notch components, like oversize bars, handguards, a hydraulic clutch and Michelin Enduro knobbies. Some of the old Husqvarna features are still there, though. It still has the dual-muffler exhaust system, the six-speed gearbox and the central-backbone frame. Somewhere along the way, the SWM gained significant weight. It comes in at 285 pounds without fuel. On the plus side, the bike is actually priced about the same as it was in 2006. The SWM RS500 sells for $7795, which is an amazing value.

We installed STI Tech 2 tires, which are street-approved full knobbies. As a side note, the KTM and Husky do not come with rim locks installed, but they are in the parts kits that come with the bikes. The Honda is completely without rim locks, and they must be purchased before knobbies can be used. With rim locks, all five bikes then have wheel balance problems that should be addressed before riding them at speed. Also, the upgrade to full knobbies did add weight to each bike, by as much as 5 pounds apiece.

The power output of these motorcycles is a perfect inverse of their noise level. The Beta is the horsepower king of the group and it’s the loudest. It’s also geared taller than the KTM, Husky or Honda. The SMW is closest to the Beta in power, noise and gearing. It’s clearly a powerful motorcycle and has an old-school, slow-revving feel with a lot of engine braking. The Husqvarna and KTM are pretty much identical in power output. They can’t quite keep up with the two Italian bikes in a straight line, but they’re super crisp and responsive. Despite its displacement disadvantage, the Honda is very close to the two Austrian bikes in performance. It might even have a touch more low-end power, and it also has a super responsive, willing feel. It does taper off quickly, but you never feel like you’ve been shortchanged in the motor department.

The Beta Husky and KTM are similar in dirt capability. The Honda leans more toward the street and the SWM even more so. The Honda’s single greatest asset is its suspension. It’s the best of the bunch, striking a very happy balance between cruise-speed comfort and had-edged performance. Weight plays a huge role in dirt performance, though. The Honda and SWM are heavy, and you just can’t escape that.

If you have a good memory, you know that the Beta 430 won our 2019 450 dual-sport shootout. It was the most powerful and, surprisingly enough, had much better suspension than the KTM and Husky. The Beta 500 went into this test with high expectations, but KTM and Husky made big progress in the suspension department for 2020. It’s will be a close call to see who wins this year. The full test will be in the July, 2020 print edition of Dirt Bike. 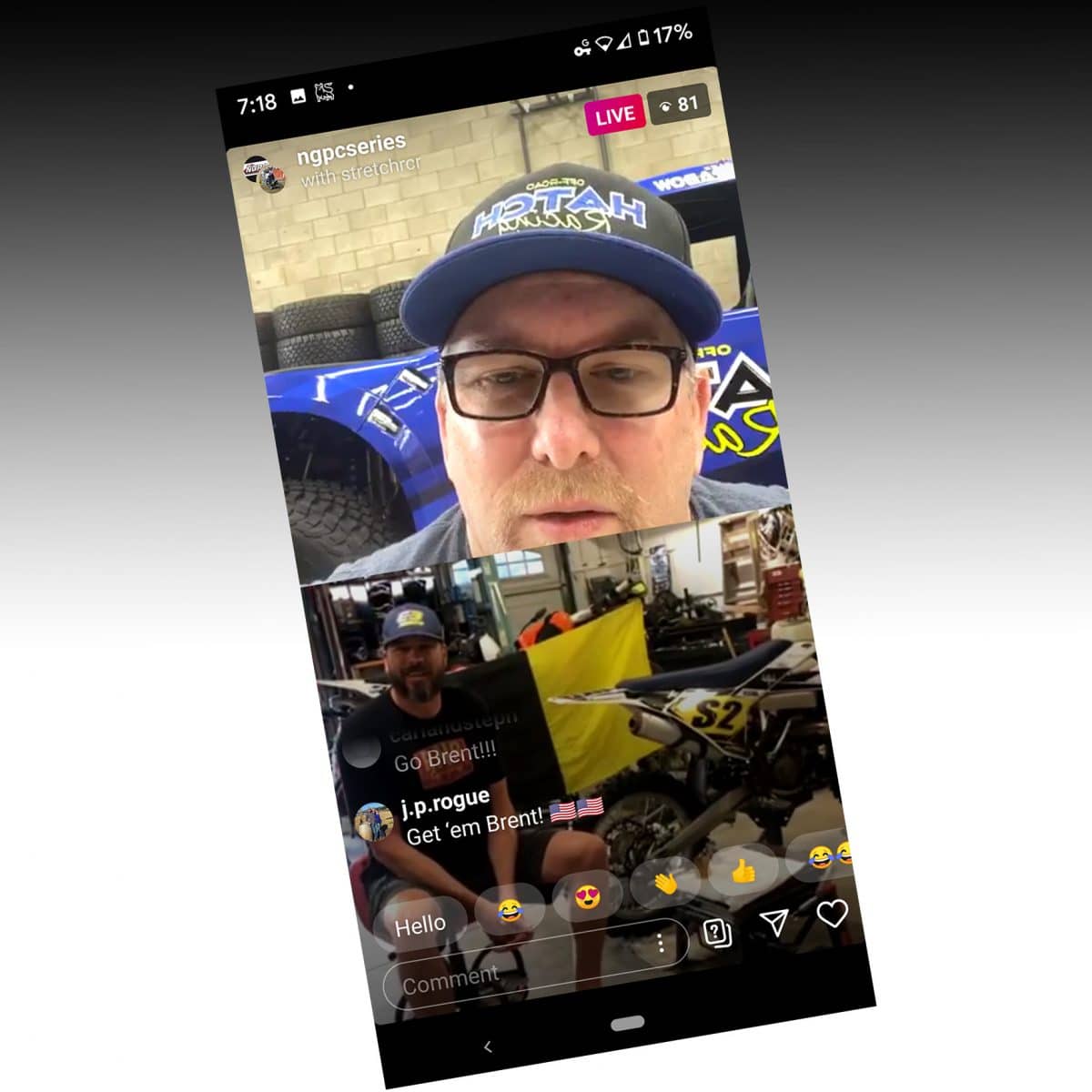 People have turned to some pretty interesting and creative ways to get their competition fix in these days of isolation. The NGPC series guys held the Kenda Tire Challenge, a bracket-style competition to see who could change a wheel the quickest. Scott Perkins hosted an Instagram live feed where two district 37 members would face off each night. The rules were simply; you had to remove your rear wheel, place it on the ground, then reinstall it. The final bracket was Brent Farrell versus Johnny Campbell. In the distant past, Brent might have been able to keep up with Johnny for brief moments, but very brief moments. In this race, however, Brent was the winner, swapping out his Husky in 16 seconds. Brent won a 3-Bros shopping spree for his efforts. There are more challenges in the works, so check out the NGPC IG account. 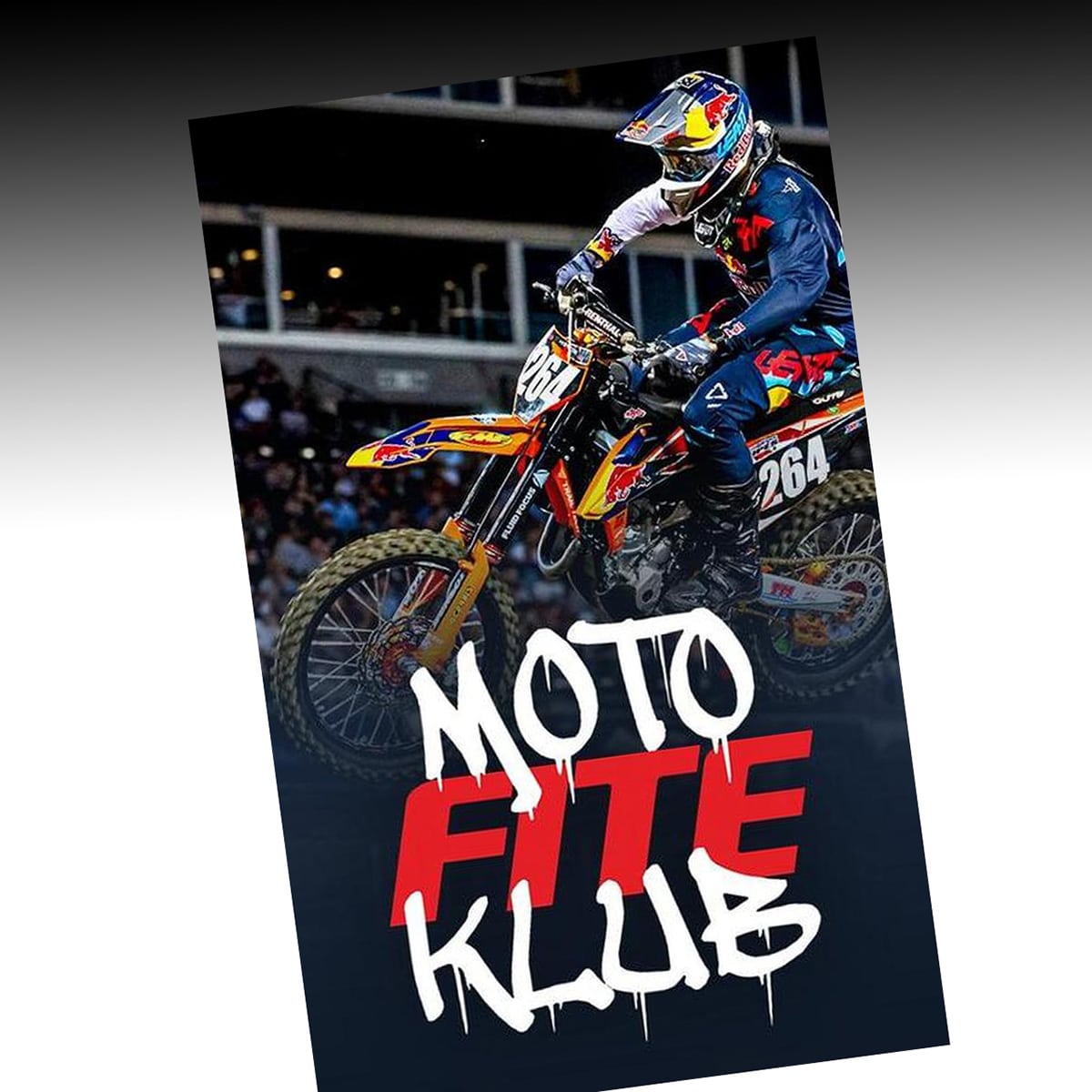 At the opposite end of the spectrum was the almost preposterously over-hyped Moto Fite Klub, which was streamed live on Fite TV last Tuesday. This was a pay-to-watch, made-to-stream event from North-Eastern Ohio at Youngstown MX. It pitted Mike Alessi, Ryan Villopoto, Ryan Sipes, Broc Glover, Damon Bradshaw, Jeff Stanton, Jake Weimer, Travis Pastrana and Kevin Windham against each other in one-lap bracket races. In the end, it was Mike Alessi who came out on top of the final–not surprising because he was racing MX full time last year, whereas most of the others retired long ago. If you want to check out a replay of the race, you can at Fite TV. 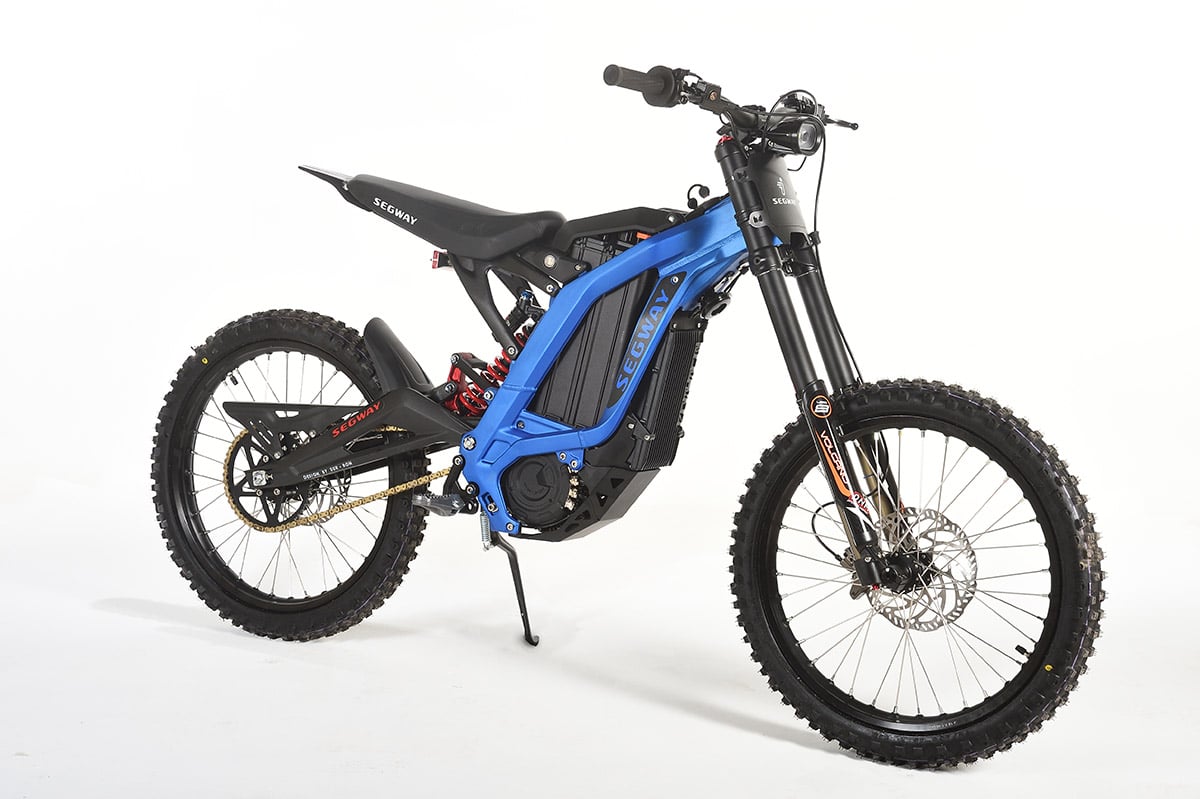 The guys at Electric Bike Action tricked us into taking the Segway Dirt eBike X260 for a test. The truth is it’s kind of fun as long as none of our friends see us riding it. It’s an off-road bike that’s about the size of an 85cc motocrosser. It’s pretty fast and it’s supposed to run for a couple of hours on a charge. It actually wheelies when you twist the gas! The brakes are bicycle-level hand brakes. We’ve just ridden it in the backyard so far. We love electric moutain bikes, but it’s a little more difficult to find a place to ride the Segway. The issue is that it looks too much like a dirt bike to ride through a suburban area to get to the trails. We would be much more enthusiastic about it if it were street-legal. It sells for $4999. We’ll report back as soon as we have some real time on it.  In the meantime, you can read more about it on the Segway website.