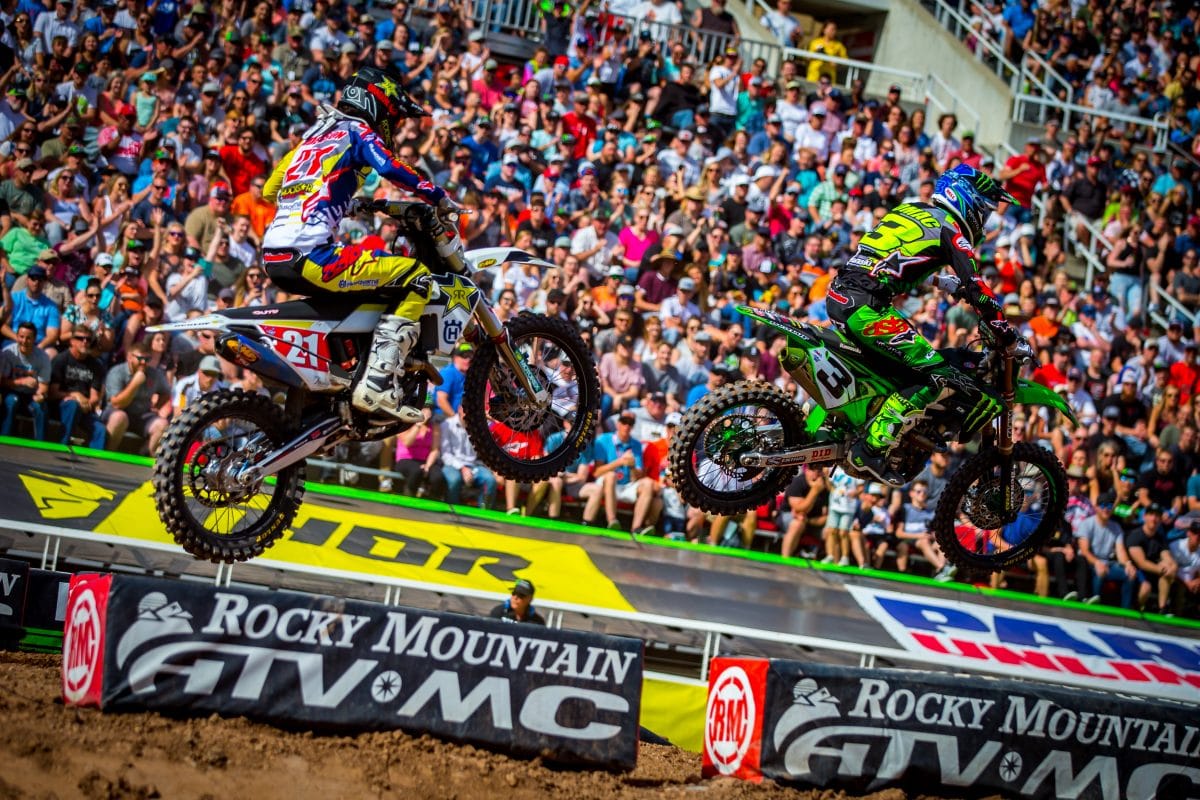 We now know that the final seven rounds of the 2020 Supercross season will be held in Salt Lake City starting on May 31. From the information just released from Feld Entertainment these event will also feature a change in format and will be run without spectators in the stadium ! The official release is below:

Monster Energy AMA Supercross, an FIM World Championship, will resume racing at Rice-Eccles Stadium in Salt Lake City, Utah on May 31 and will run through June 21. The final seven, made-for-tv races will be broadcast on NBC networks without fans in attendance. The Utah Sports Commission, a longtime partner of Supercross, has coordinated our return to Utah.
Like all forms of sports, the Monster Energy Supercross Championship was abruptly halted in early March after completing ten rounds of the 17-round Championship. The last race was held on March 7 at Daytona International Speedway in Daytona Beach, Fla. where Monster Energy Kawasaki’s Eli Tomac earned his fifth win of the season over top rival Team Honda HRC’s Ken Roczen, both of whom are competing for their first premiere class title with only three points of separation.
The sports industry in the United States, like virtually all industries, is being severely impacted by the COVID-19 pandemic. Monster Energy Supercross fuels an entire industry and is the primary source of income for thousands, including competitors. With no events, the industry is in severe economic peril. It’s important to the economic infrastructure to get back-to-work. Unlike other professional sports with guaranteed contracts, Supercross athletes, team personnel and many others involved in event and television production are independent contractors.
“We’re excited to continue our work with Feld Entertainment, Rice-Eccles Stadium at the University of Utah, and the Utah Department of Health Services. Their continued support along with Utah’s Governor Gary R. Herbert, have made it possible for Supercross’ return to Utah,” said Jeff Robbins, President and CEO, Utah Sports Commission. “We also look forward to showcasing Utah worldwide via Supercross’ global footprint.”
The responsible return to racing will provide guidelines and protocols to competitors and essential staff that complies with all federal, state and local health guidance and mandates. Mitigation efforts include mandated prescreening, testing, temperature checks, face masks, increased sanitation efforts and social distancing to limit contact among individuals executing the events.The stadium will assist with the implementation and execution of our plan. Supercross, in partnership with the Alpinestars Medical Unit, has a trained medical team of 7 professionals to assist on site.
The racing format has been adjusted to reduce the number of athletes to stay within the minimum requirements and a standard race format will be used for all seven rounds, except for the finale which will be an Eastern/Western Regional 250SX Class Showdown.
Supercross Race Format for Final Seven Rounds: