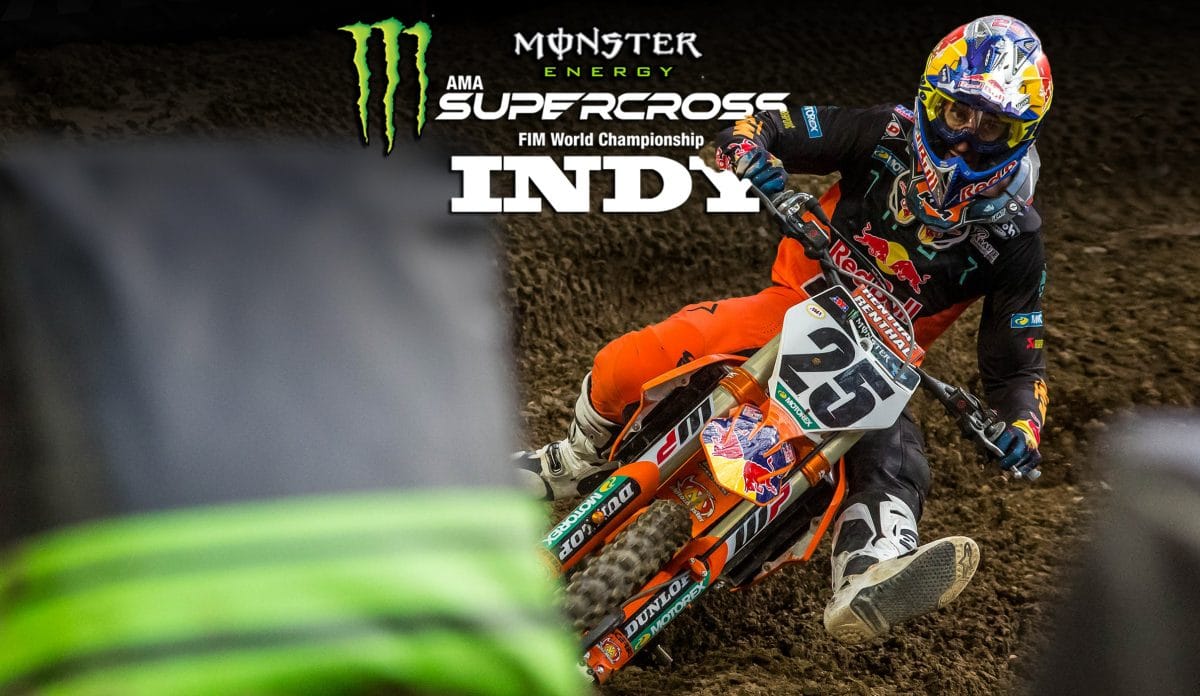 Red Bull KTM’s Marvin Musquin rode a perfect race in the 450 main event at the 2019 Indianapolis Supercross to take his first win of the year. It looked like Blake Baggett got the  holeshot, but Musquin took over right away and withstood pressure from everyone, including Eli Tomac. Cooper Webb’s start wasn’t great, but he made up time in the middle of the race to make it a four-way battle up front. Webb passed Tomac almost by accident. He lost control in a rhythm section, landing on a Tuff block  and almost T-boned Tomac. Eli backed out so he wouldn’t go down, and that put Webb in third. At one point, Webb was riding almost too hard. In the end, he backed down, clearly thinking about preserving his red plate.

On the podium, Musquin was obviously relieved to earn his first win. “It was the start, that made the difference,” he said. “That track was really hard. It was hard to be smooth. I saw them coming, I figured if I could hold off Blake, I could make it happen all the way to the finish.” For extended coverage of the 2019 Indianapolis Supercross, click here.

The first 450 heat of the 2019 Indianapolis Supercross was packed. It had Eli Tomac, Marvin Musquin, Ken Roczen, and Justin Barcia, but it was Rockstar Husqvarna’s Dean Wilson who got the win. Mike Alessi started up front, but tangled with Wilson and Roczen and went down. Wilson took the lead early, but could never break away from Musquin and Roczen. In the later laps, Tomac came up to join in the race. It was then a big gap back to Justin Barcia. In the end, Deano held off a number of pass attempts from Musquin and took his first heat win of the year.

Blake Baggett was up front at the start of heat two, but Red Bull KTM factory rider and points leader Cooper Webb was right on his heals. Within a few laps, Baggett made a mistake and missed a triple, allowing Webb to take the lead. Joey Savatgy also took advantage of Baggett, moving into third before the finish. “The track right now is a little tougher,” said Webb. “We’re all doing the same thing, so it’s easy to make mistakes.  It’s cool to get up here for a heat win and I hope to do it again for the main!”

The top four finishers in the 450 LCQ were anything but rookies. Mike Alessi, Kyle Chisholm, Ben LaMay and Adam Enticknap all made up for various mistakes and misfortunes in their heats to get into the main. It was Alessi’s second LCQ of his 2019 Supercross season, which is only a few races old, as he is riding for the injured Vince Friese.