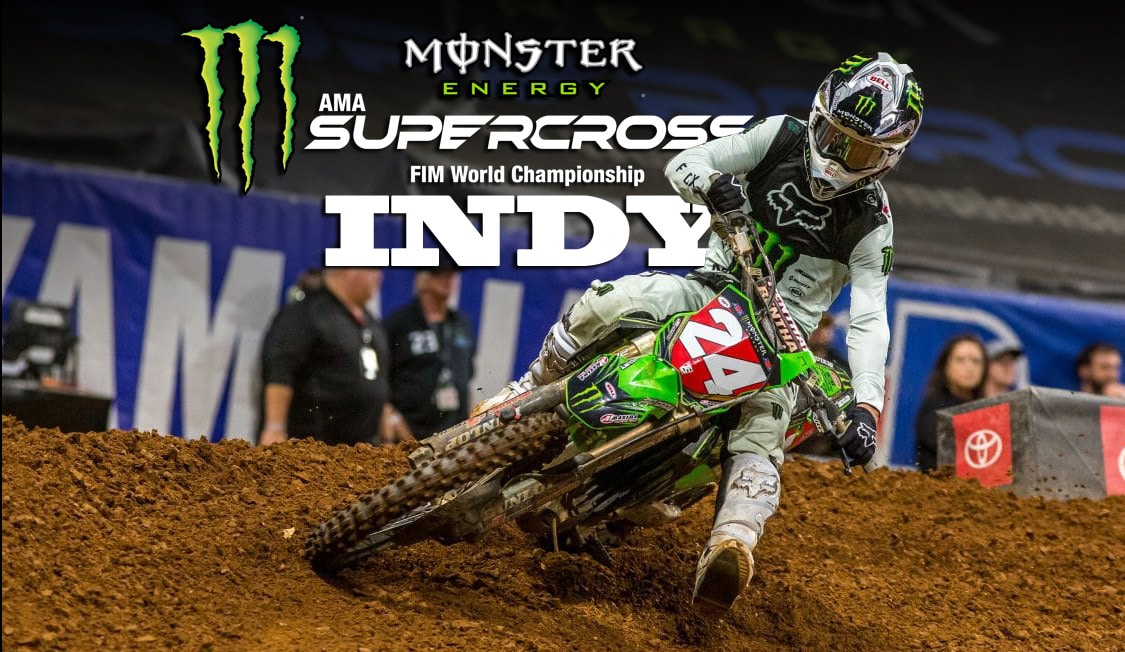 Austin Forkner recovered from a rough heat race to return to the top of the podium at the 2019 Indianapolis Supercross in the 250 main event. He didn’t have the greatest gate pick after his fifth-place finish in the heat, but he still turned that into a great start. Throughout the race, he inched away from his arch rival Chase Sexton to eventually build a 10 second cushion. Sexton had his hands full holding off Forkner’s Pro Circuit Kawasaki teammate Martin Davalos in the early laps of the race. Eventually Sexton built up his own cushion, leaving the rest of the field to battle for third. Justin Cooper got a poor start after being pushed off the track, but he passed Mitchell Oldenburg in a dramatic last-lap battle to earn third. “I came into this a little sick,” Forkner said on the podium. “So I couldn’t over-push. Smooth is fast, and that was my goal tonight. I’m in championship mode.” For extended coverage of the 2019 Indianapolis Supercross, click here.

Geico Honda’s Chase Sexton drew first blood at the 2019 Indianapolis Supercross with a victory in the first 250 heat. He got a fair start and spent about half the race behind Mitchell Oldenburg and Alex Martin. When he passed Martin, it wasn’t long before he got by Oldenburg for the lead. Sexton was relieved because he said he hadn’t felt like he was riding well all night. He said it was a big difference when he made a few bike changes and it worked out well.

The second heat started with a big shake up when Austin Forkner hit a Tuff block in the first turn and crashed hard, getting run over in the process. That left Kyle Peters in front ahead of Justin Cooper and Martin Davalos. Forkner came around in 17th, then started working through the field. At the halfway point, he was already in ninth, which meant he was in qualifying position. Justin Cooper started pushing Peters hard for the lead, with Davalos close behind. At one point, Davalos passed both riders, but on the final lap, Cooper came back to finally take the lead and the win. Forkner caught up to fifth.

Lane Shaw’s heat didn’t go well at all. Austin Forkner fell in front of him in the first turn and Shaw went down–after running over Forkner. His day turned around with a solid win in the LCQ.