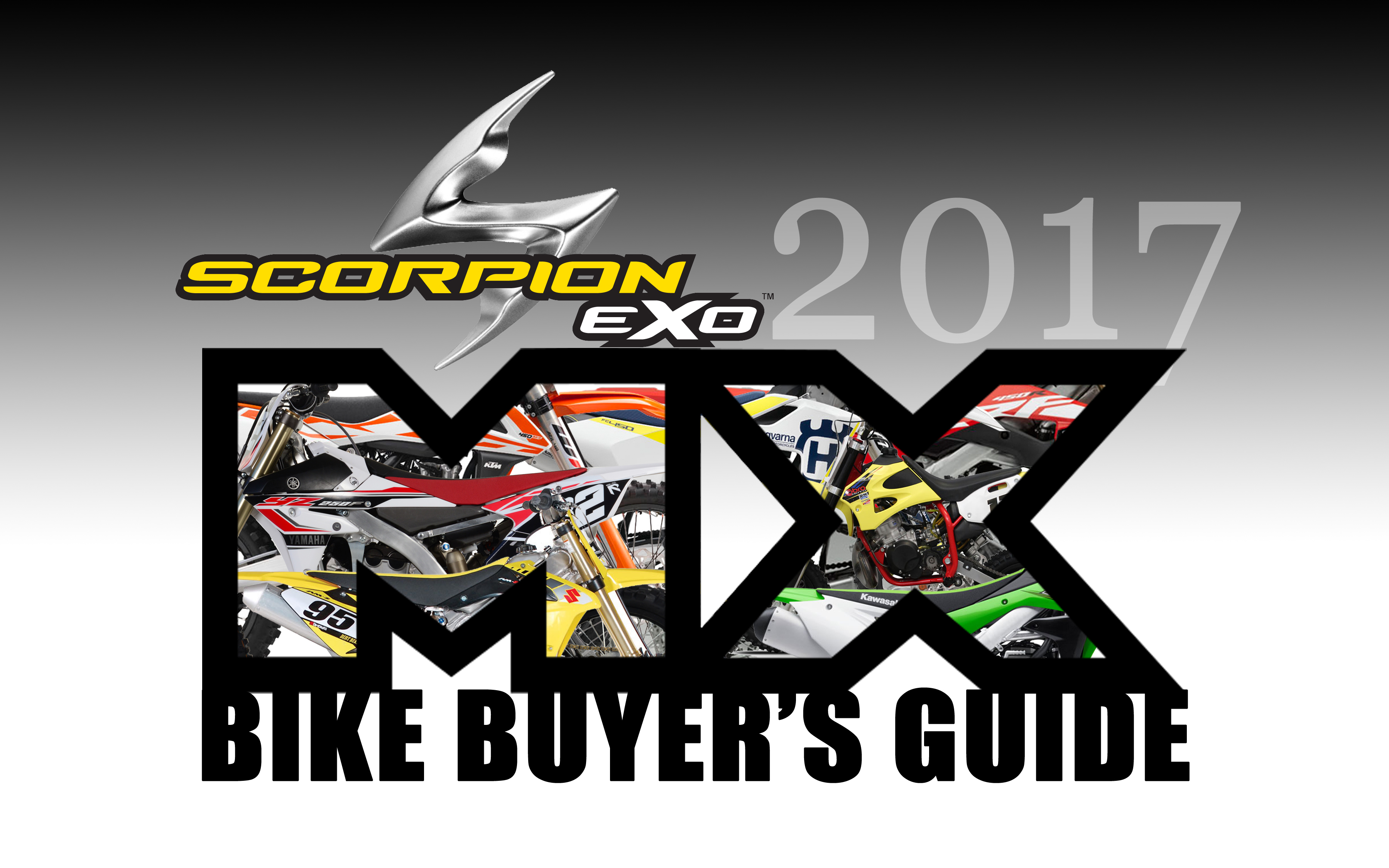 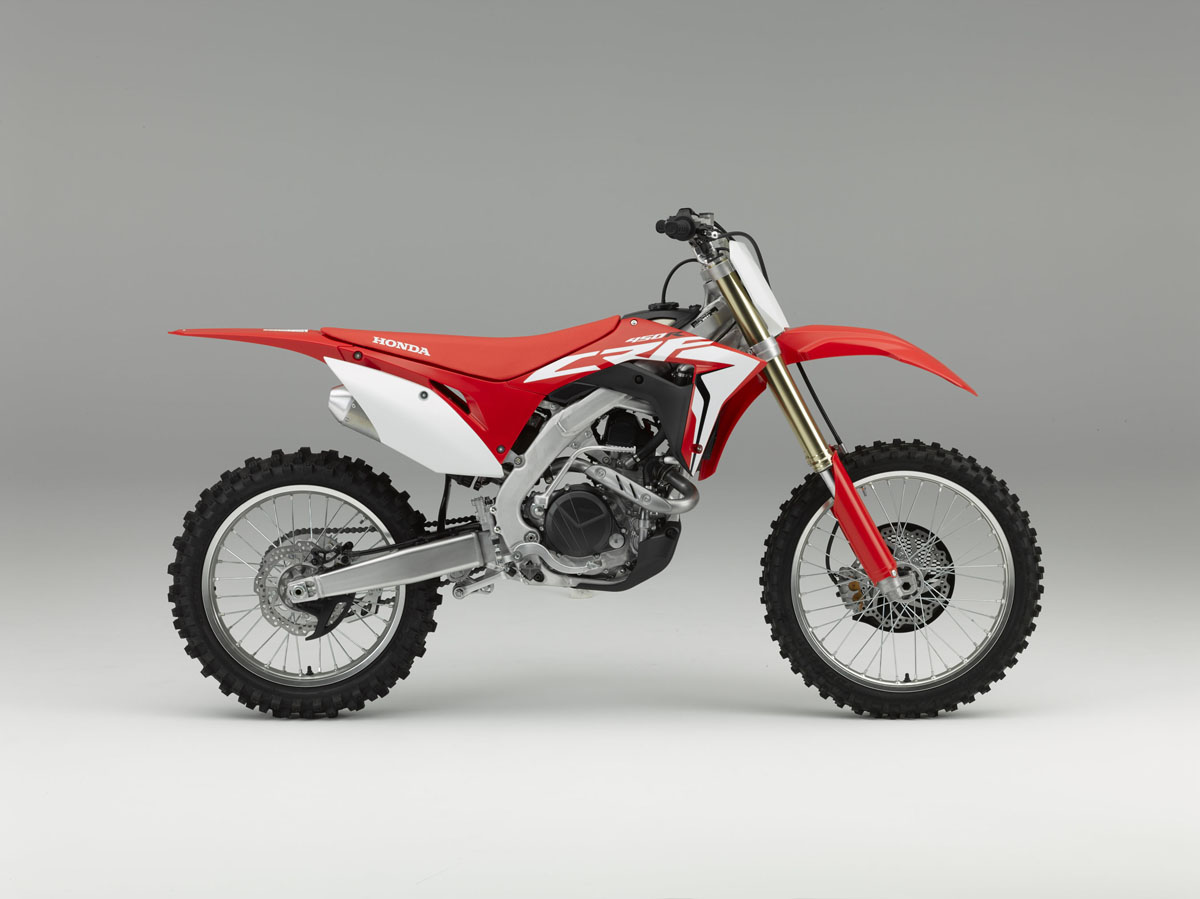 HONDA CRF450R: PRICE TO BE ANNOUNCED

Honda’s long awaited redesign of its 450 is a late arrival for 2017. It has a new intake design that brings air into the motor over the top shock mount. The motor still uses the Unicam layout, but is completely redesigned, and an electric-starter kit will be a dealer-installed option. The fork now has coil-springs rather than air, but the overall weight is said to be no more than before. 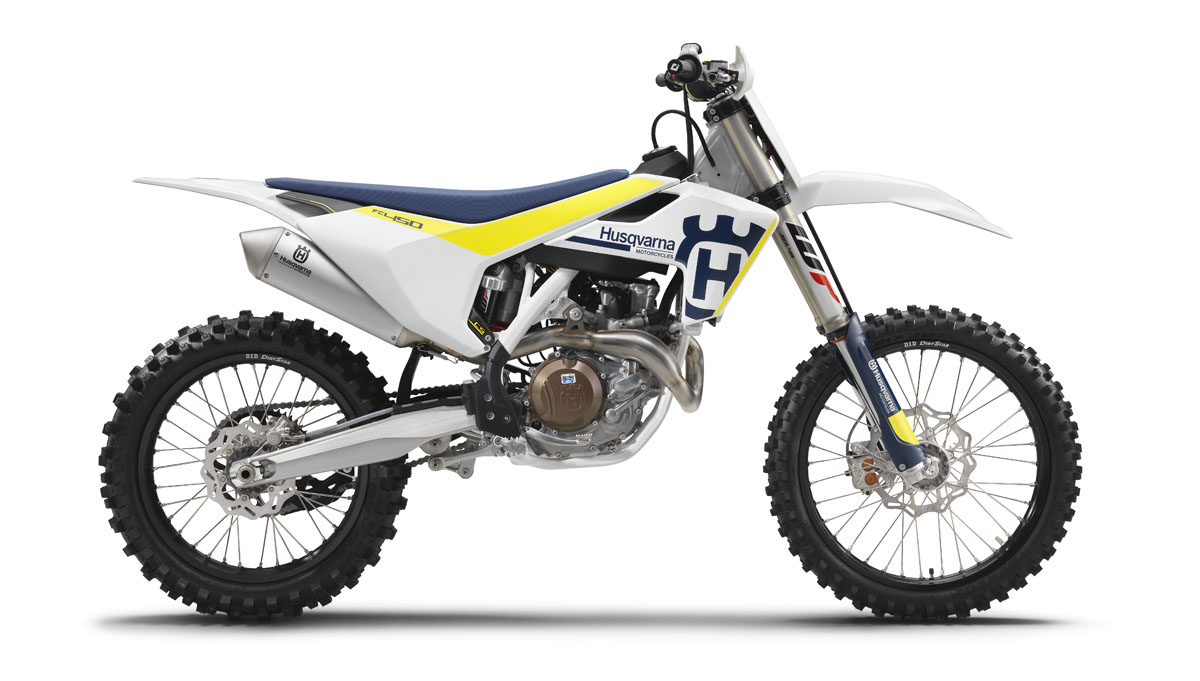 The top of the food chain in motocross is up for grabs this year, and the Husky FC450 is one of the leading contenders. It’s always had the power, and this year the suspension is vastly improved with the WP AER 48 fork.It still has electric start and is amazingly light. The new traction control feature is a program that smooths out sudden rpm increases. 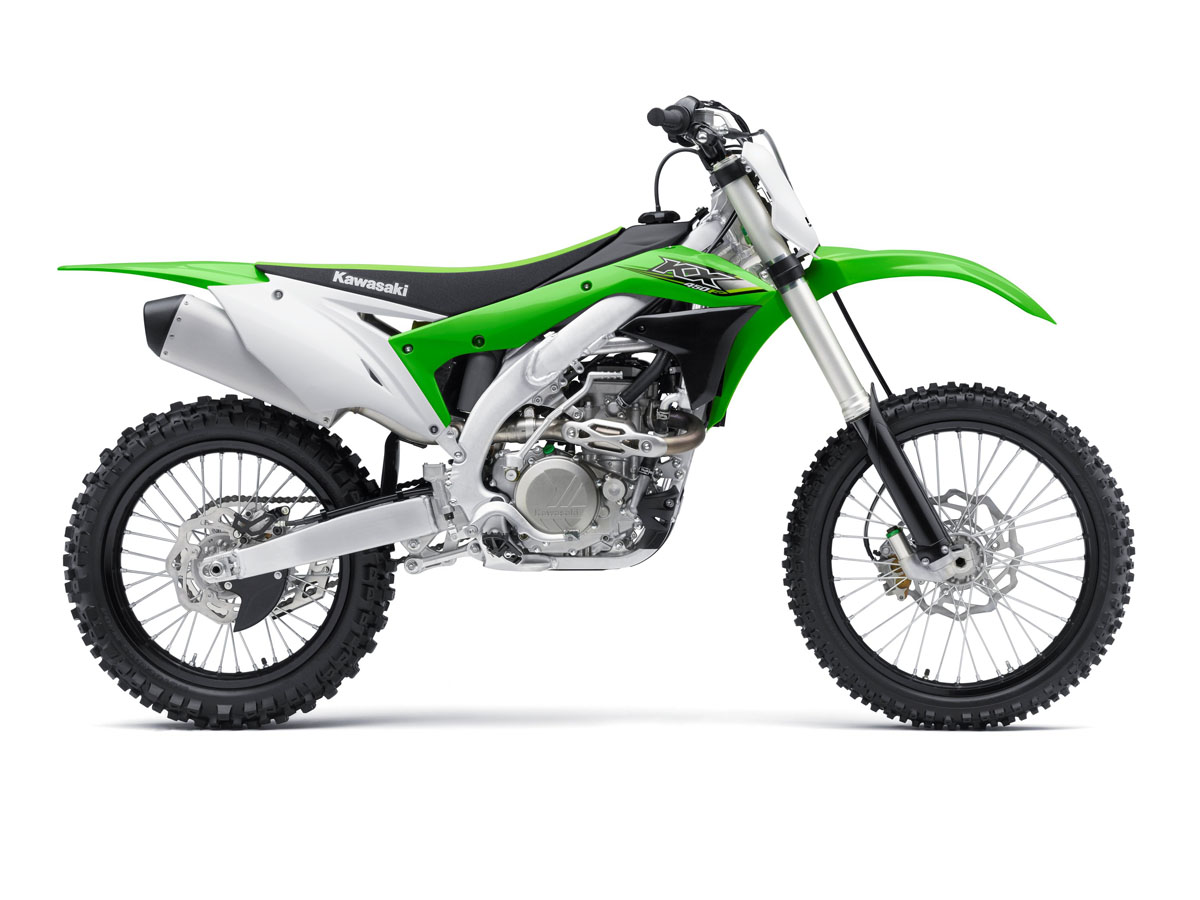 With a new chassis that arrived in 2016, the present-day KX450 is narrower and lighter than it was, making it a very safe choice in the 450 class. It has Showa’s SFF TAC air fork, which has two opposing air chambers in the right fork leg and all the damping functions in the left. The KX is a very adjustable bike, with several options for footpeg and handlebar placement. 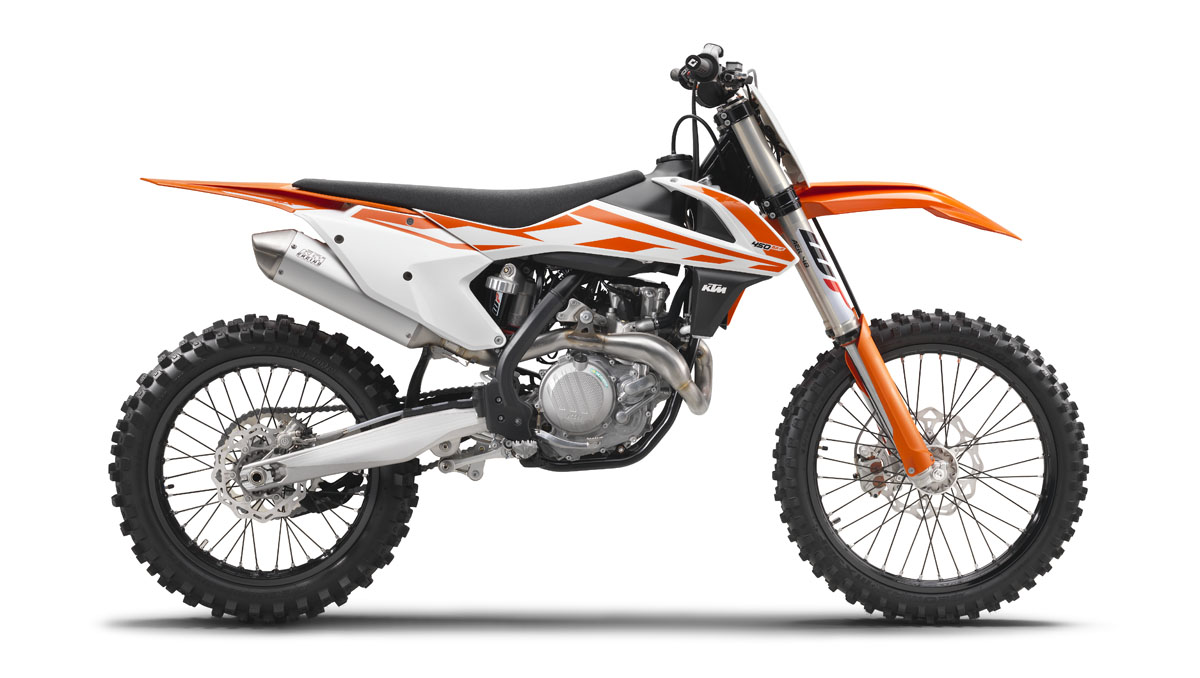 It’s hard to pretend that the KTM 450 isn’t flat incredible. It’s the most powerful and lightest bike in the 450 class, it has electric start and for 2017 it gets a new fork. The WP AER 48 has all its damping workings in the right leg and in the left side there’s a single chamber that replaces the coil spring, saving almost 3 pounds and improving ride quality dramatically over last year’s fork. 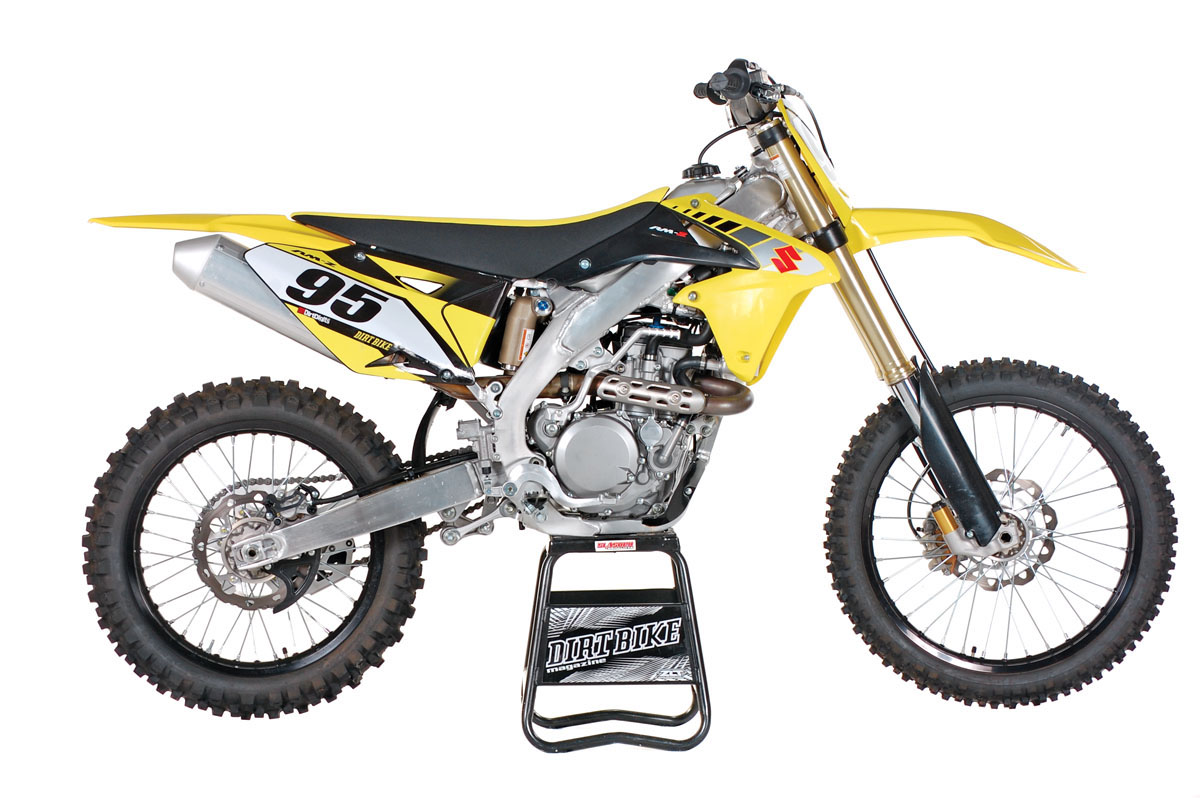 There are no changes for the 2017 RM-Z450, but it remains one of the most under appreciated bikes in the class. It has smooth power, excellent handling and suspension that can be dialed in once you understand the possibilities of the Showa Triple Air fork. Despite being a little heavy, there is nothing in the class that corners as well as the Suzuki. 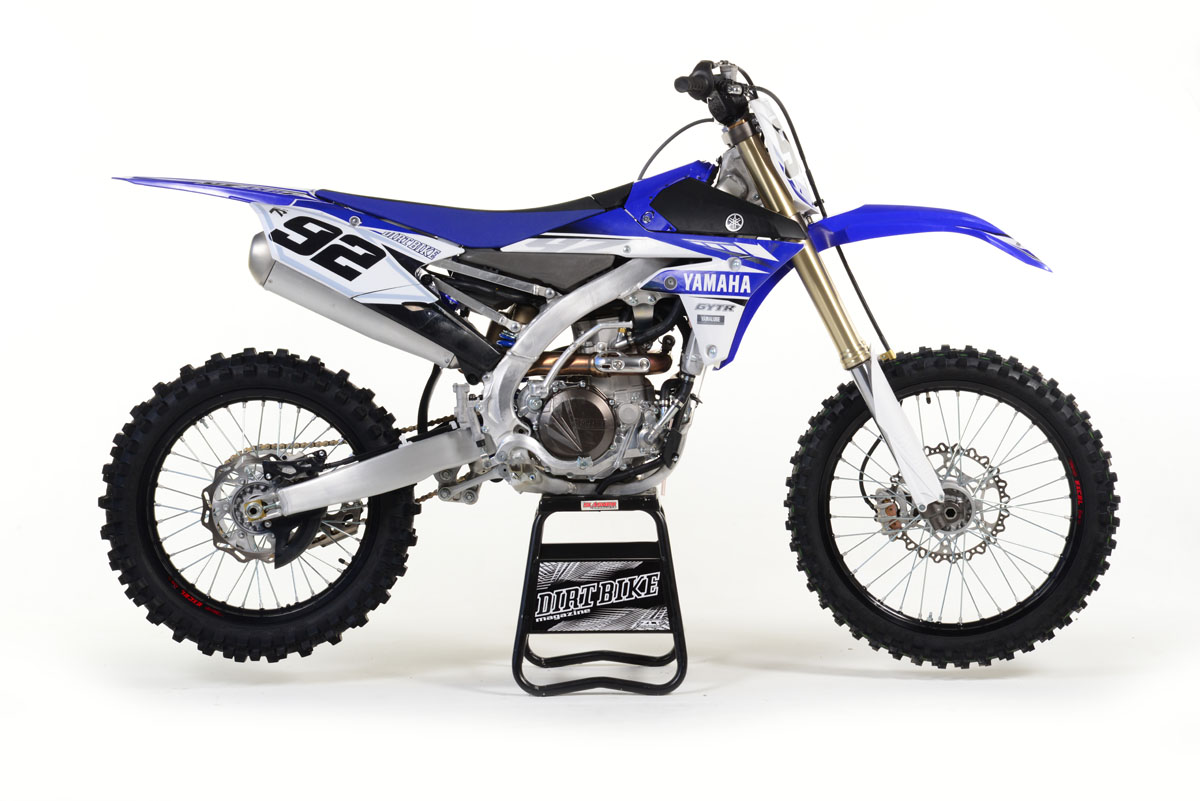 The YZ450F has one of the strongest motors in the motocross world, the best overall suspension and the best reputation for reliability. The YZ uses the reverse head engine layout that rocked the world in 2011, as well as the topside air filter and wrap-around head pipe. There are virtually no changes for 2017 beyond graphics and minor details. 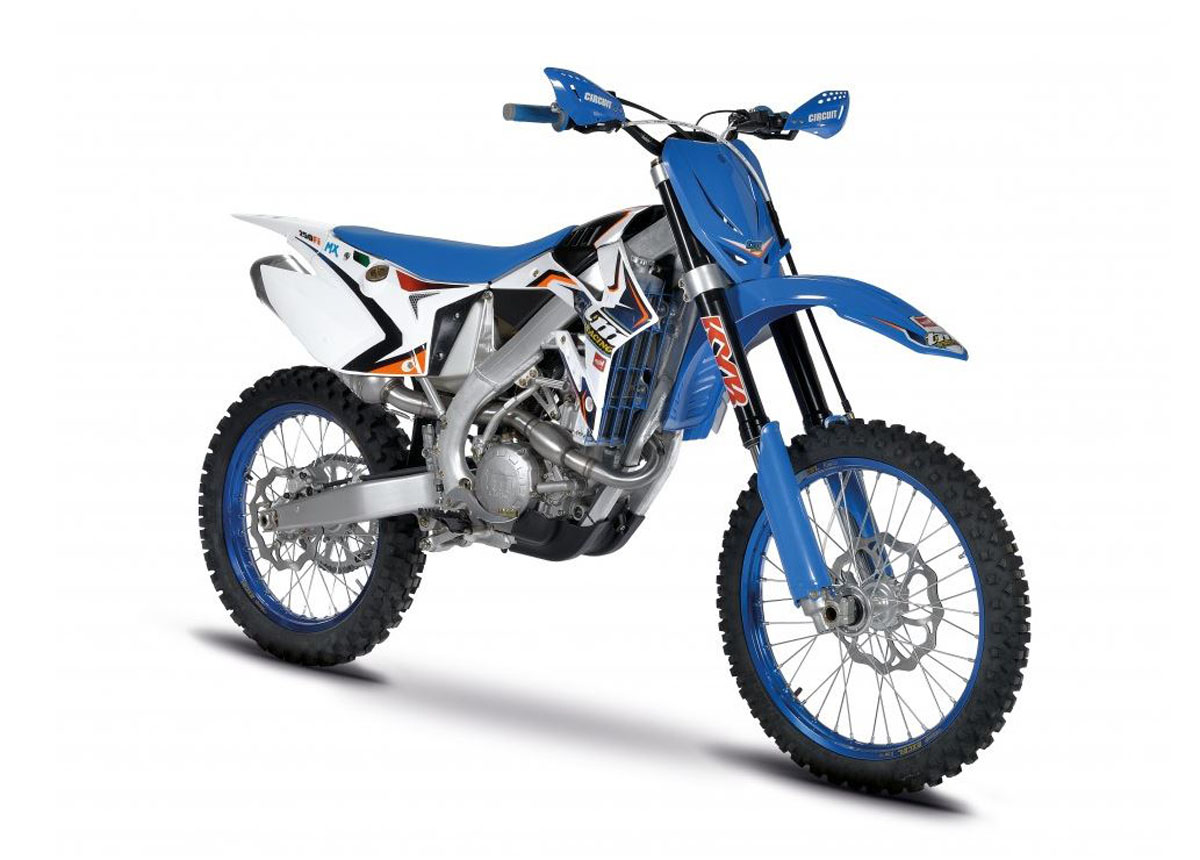 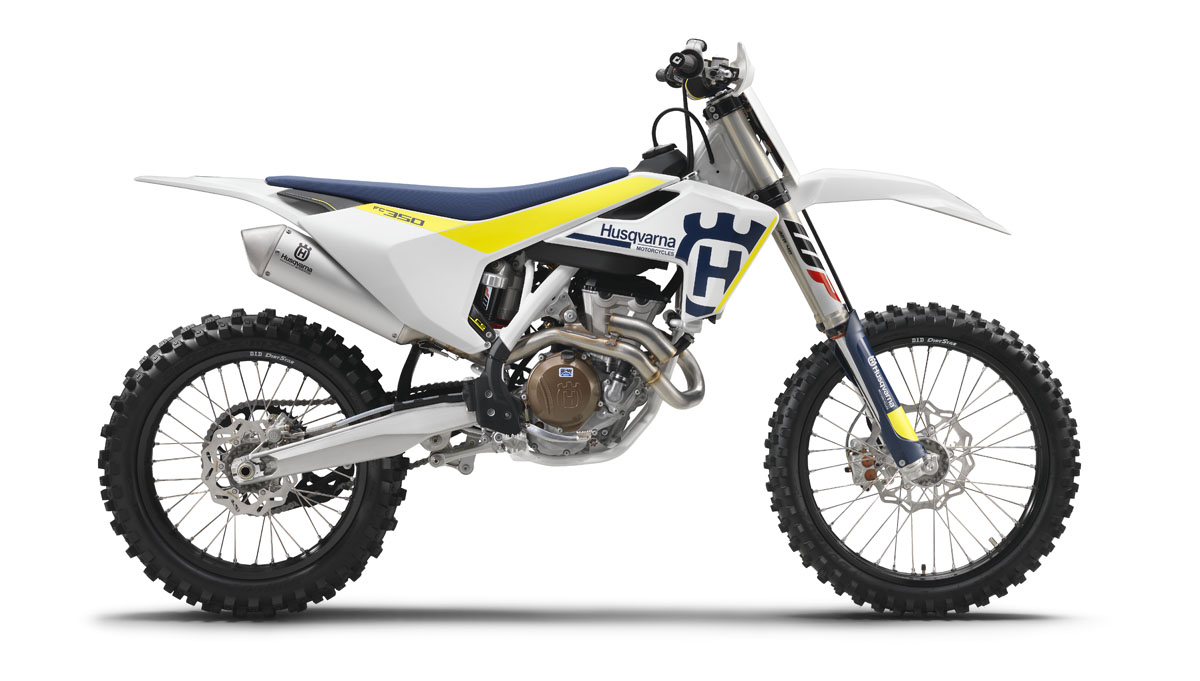 When you ride a 350 against 450s, you give up torque and sheer power, but the powerband of this year’s FC350 is extremely wide because of its 14,000 redline. The 350 also gives you a higher fun factor, less weight and more maneuverability. The FC350 for 2017 gets a handlebar mounted traction control switch and a new air fork. 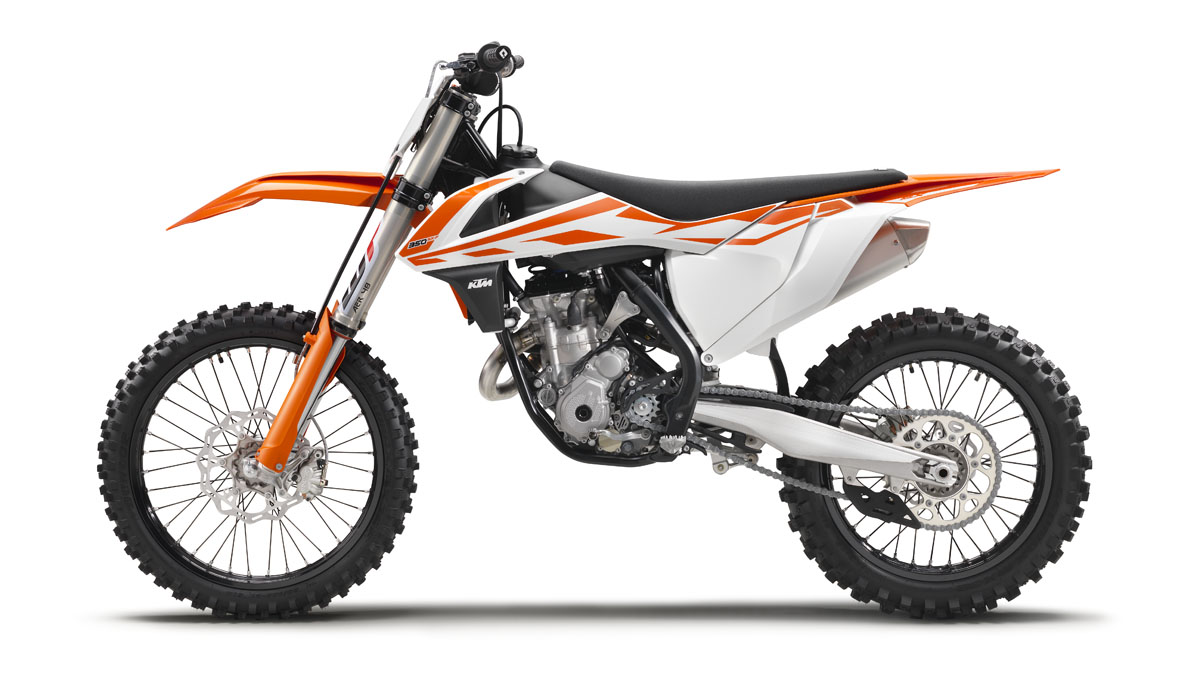 We don’t understand why KTM is the only company that gets it. Aside from its blood brother on the Husqvarna side of the company, KTM has the only 350cc bike in the 450 MX category. It’s true that Dungey, Cairoli and the other factory Pros race full-size 450s, but even they will say that the 350 is more fun. This year it gets the WP AER 48 air fork and traction control.

The Honda 250cc motocrosser is the only single-overhead cam bike in the 250 MX class. It’s very torquey and easy to ride, but perhaps down slightly on peak power compared to DOHC bikes. It has a Showa Triple Air fork, twin exhausts and weighs the exact same as the Yamaha. For 2017, the bike returns without changes. 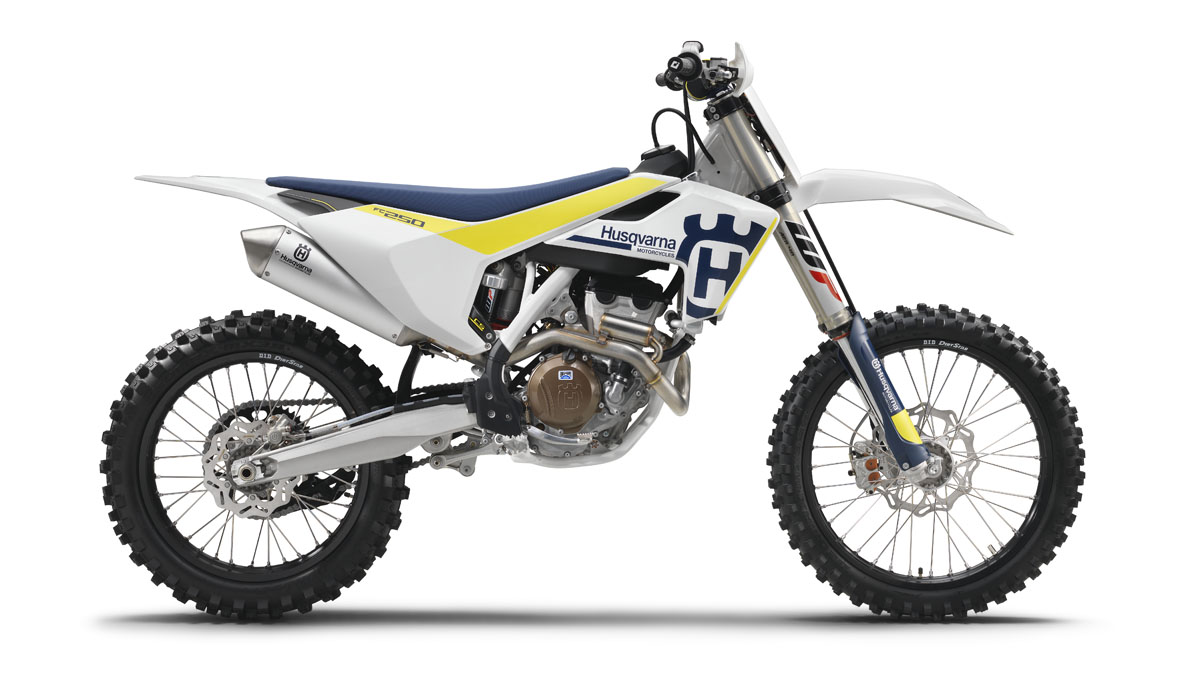 Husqvarna continues to battle the notion that its offerings are just white KTMs. The 2017 FC250 can give you that impression because it shares the same engine, frame and suspension with the KTM 250SX-F. Both have electric start, big peak horsepower numbers and the new WP AER 48 air fork. But the Husky is just different enough in suspension, bodywork and layout. 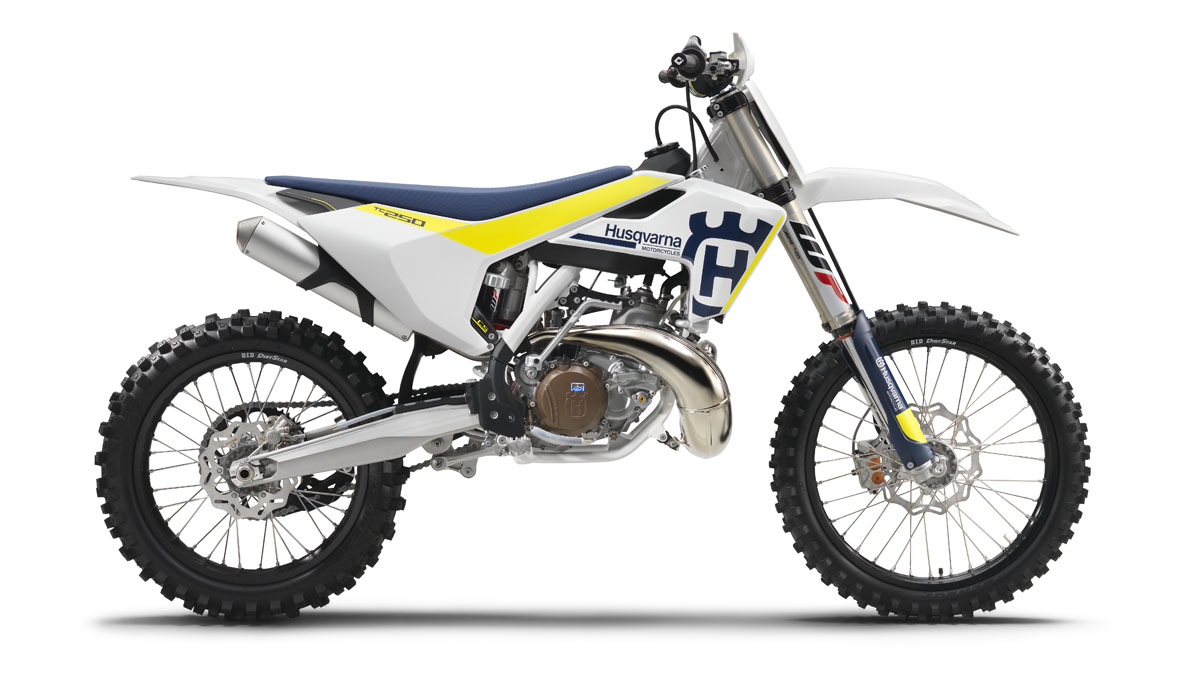 This is the newest bike in the Husqvarna line, and is the foundation for a whole family of new two-strokes. The TC250 motocross bike has a new five-speed motor with a Mikuni TMX carburetor. It uses the same powervalve configuration as the motor it replaces, but everything else is new, including a counterbalancer shaft.

For a video featuring the 2017 Husqvarna TC250 two-stroke, click here. 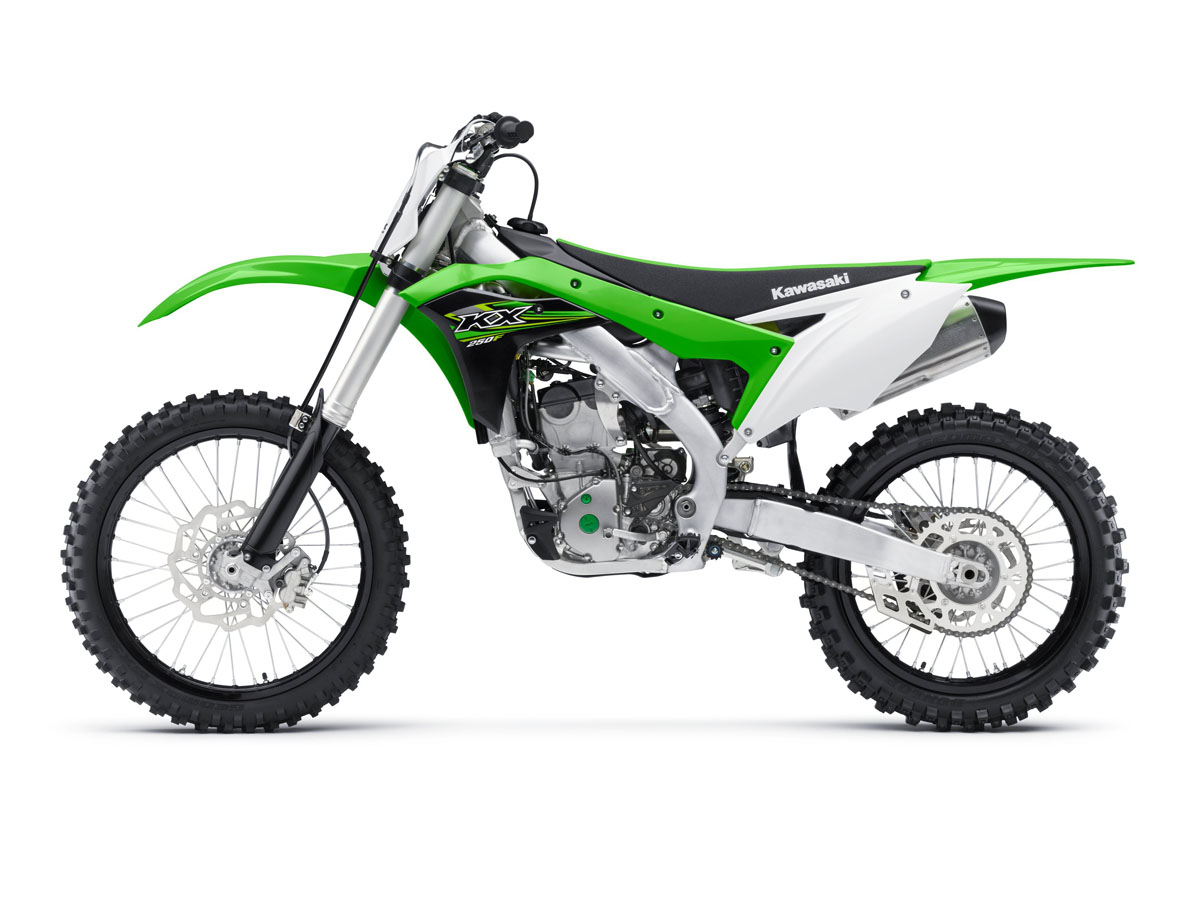 Kawasaki gave its 250 a complete redesign for 2017 with weight reduction as the primary priority. It’s now a pound lighter than either the Honda or Yamaha. It still uses the Showa SFF fork with a single spring in one leg, and it’s the only off-road motorcycle to use a secondary fuel injector, located between the air filter and the throttle body. 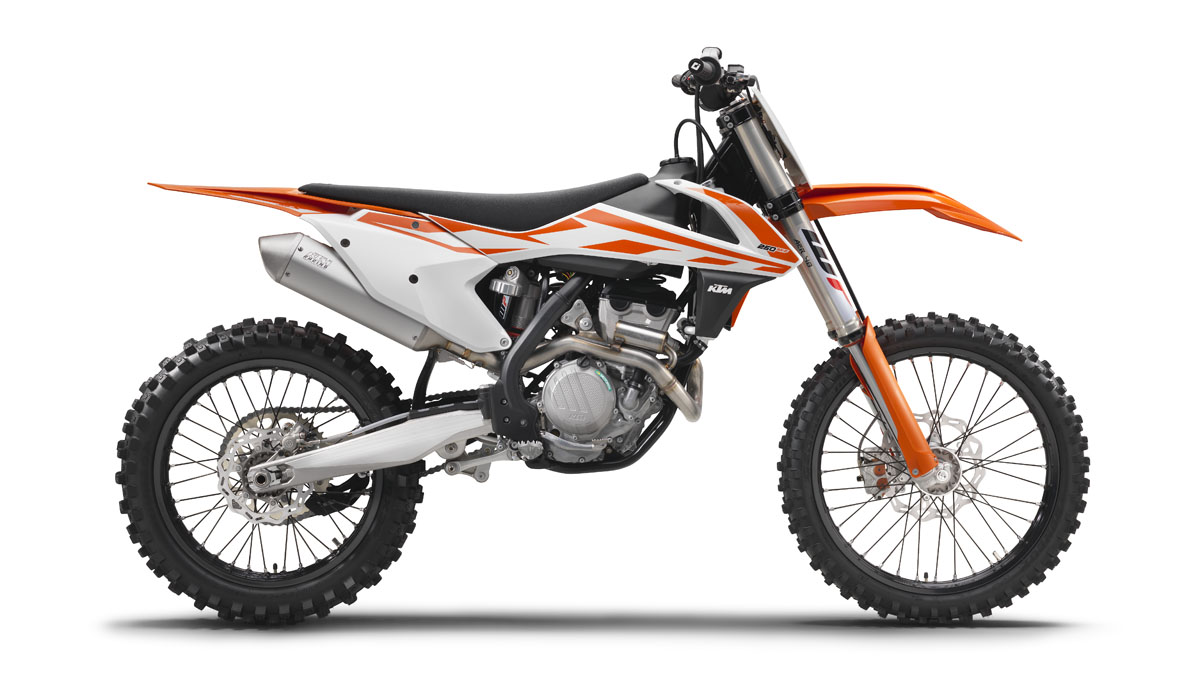 There’s no doubt that KTM has the fastest and lightest bike in the 250 class. It’s traditionally been a bike for pro and intermediate riders, and for 2017, that’s still the case. Most of its horsepower advantage is in the top of the powerband. The electric starter, on the other hand, pleases everyone. For 2017 it gets an air fork and push-button traction control.

We’ve been waiting for this bike for years. The 250SX has the first full-size two-stroke motocross motor released since 2002. The same motor platform is used for nine different bikes across the KTM and Husqvarna lines, making it the biggest combined production run in the company for 2017. In MX configuration it doesn’t have E-start, but a kit is on the way. 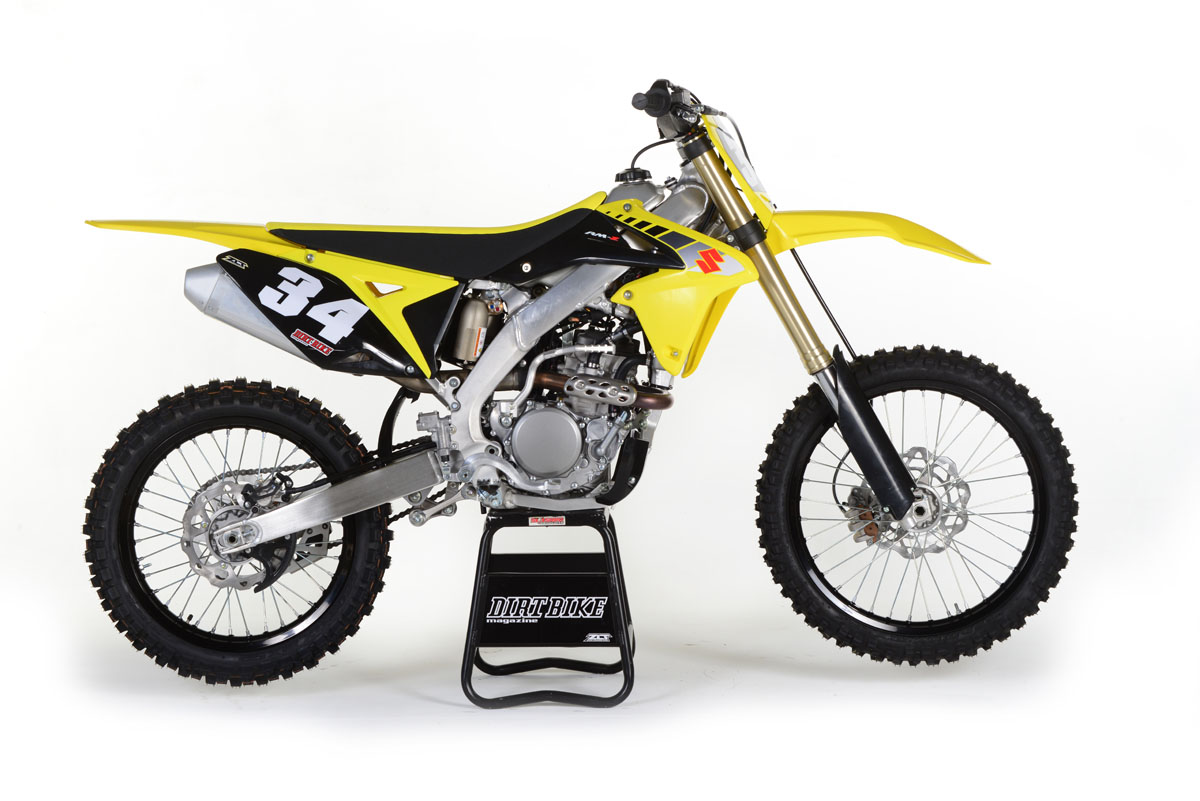 In 2016, the RM-Z received some motor, frame and suspension updates, although the bike hasn’t cosmetically changed in a very long time. It’s unchanged for 2017, and still has the KYB PSF2 fork, which features low-pressure air chambers and independently adjustable high and low-speed compression damping. The motor has excellent bottom end, but modest peak power. 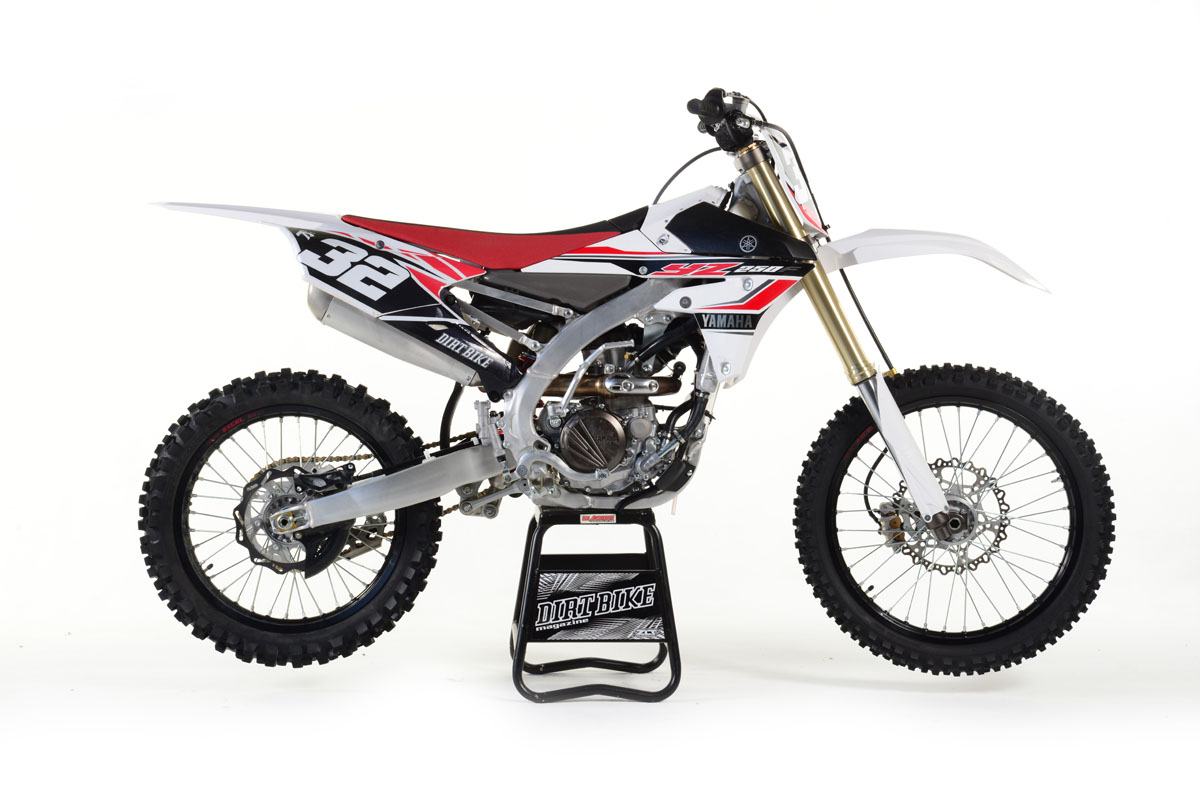 Yamaha’s 250 motocross bike has had a charmed existence since it was redesigned in 2014. It’s won three consecutive National Championships and three consecutive Dirt Bike 250 MX shootouts. There are a few changes for 2017, but it still features the reverse-head engine and has the only two-spring fork from a major manufacturer.

This bike still uses Yamaha’s first generation aluminum frame, dating back to 2005. The motor actually goes back a few years further. But the bike still holds its own on the track and has become an icon in the two-stroke world. Yamaha has continued its policy of giving the bike just enough attention to keep it relevant, and this year it got a 270mm front brake. 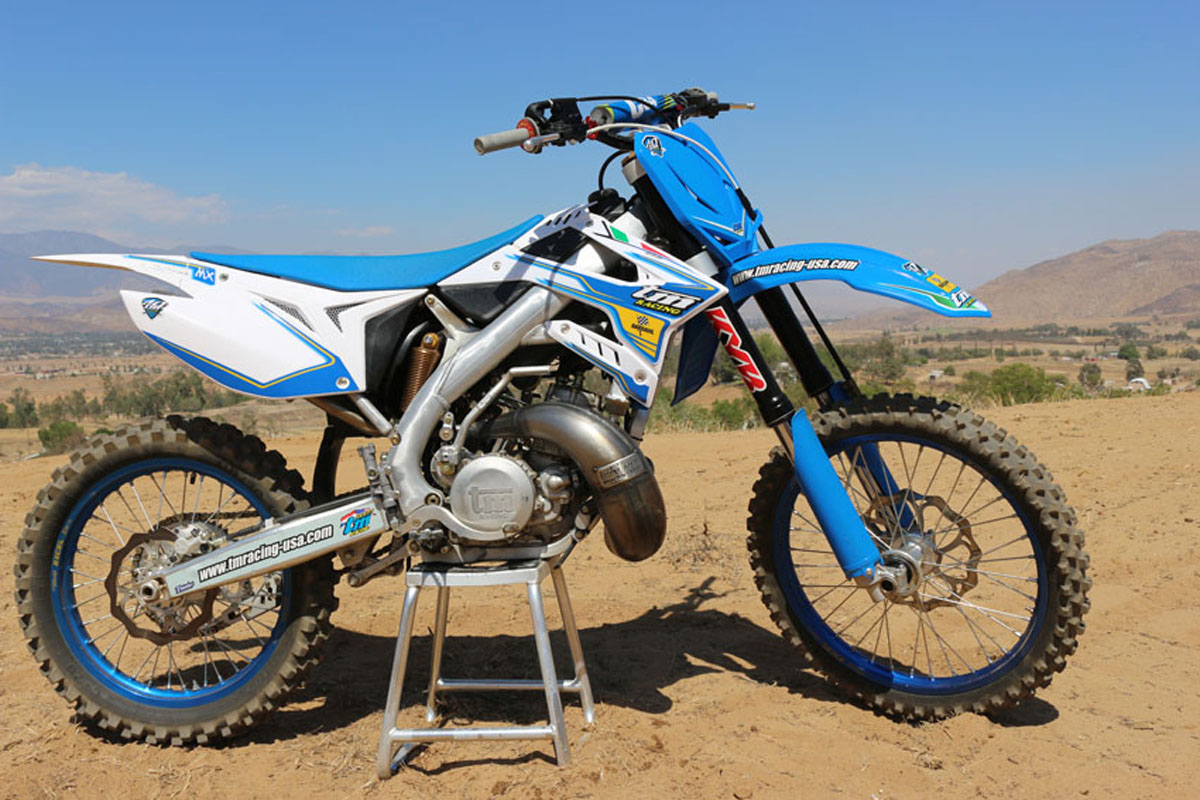 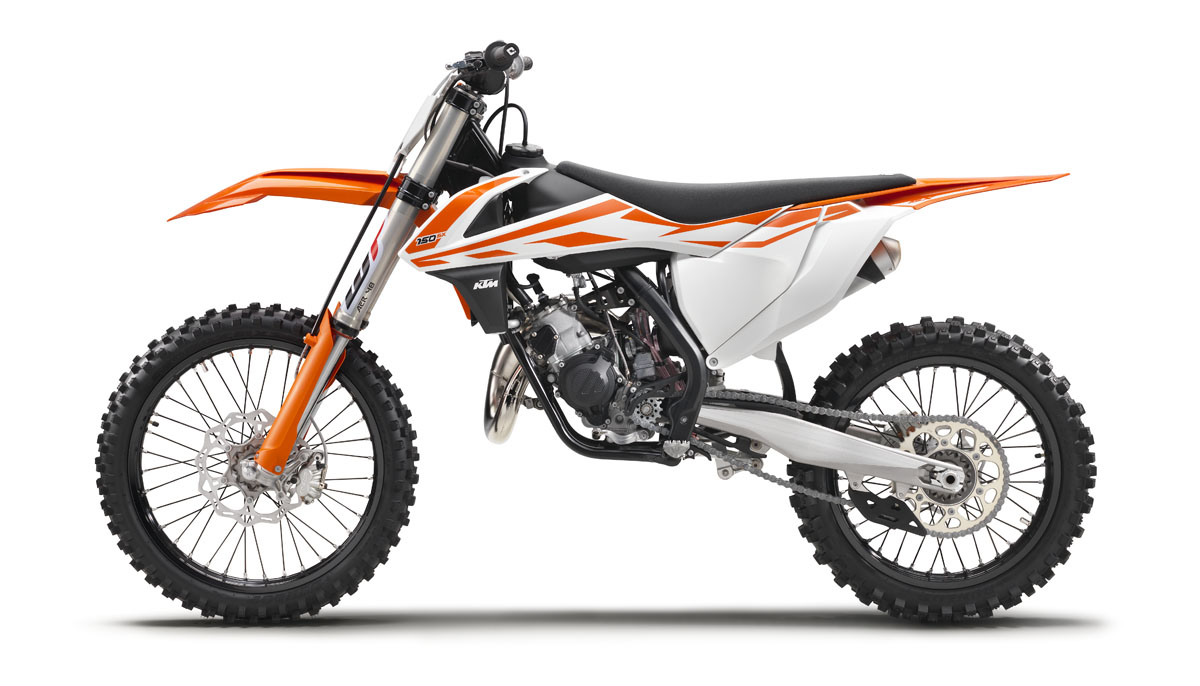 This is the second year for the new version of the two-stroke 150, which shares a great many parts with the KTM 125SX. The two bikes have very different personalities, though. The 150 makes much more power, but hits harder and doesn’t rev as high. In theory, at least, this is competitive with 250cc four-strokes, but is more demanding of its rider.