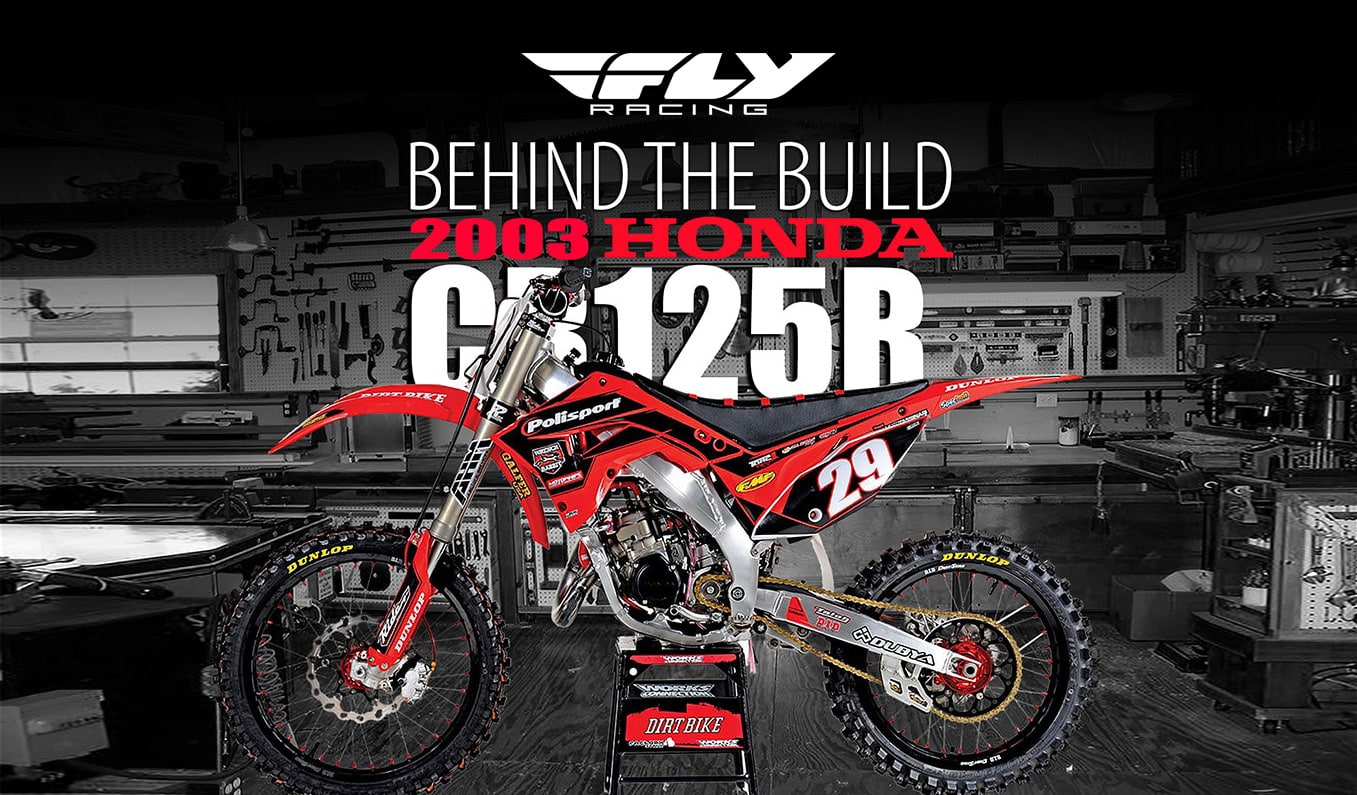 To say that early to mid-2000 Honda CR125Rs are more popular today—over a decade after the last one rolled off the assembly line in Japan—might not be completely accurate. But, it’s not far off, either, and we are certain the people buying them today are more passionate about two-strokes than ever before. We teamed up with Polisport Plastics and Decal Works to give our 2003 CR125R some modern-day bling in addition to a mechanical make-over.

WARP DRIVE
First things first, this was a complete tear-down. The bike had been taken care of fairly well and stored inside of a garage for most of its life. The only bad thing was its owner was 14 in 2003. Yes, it was abused for four or five years until it blew up and then stuffed into the garage. The frame, swingarm, linkage and subframe were sent to Justin and his crew at Moto Whips to restore. They removed all the casting marks on the linkage, replaced the bearings and seals, and topped it off with their signature brushed-look finish. The mainframe, swingarm and subframe received the same attention with mind-blowing results.

All the smaller OEM chassis items were cleaned up and blasted using a Vapor Honing Technologies VH800 wet blasting machine. This process is great for restoring older items without removing valuable material. The process is safe on all rubber and plastic items as well. Yes, we blasted the complete airbox assembly and gas tank with great results.Brandon at AHM Factory Services took care of all our suspension needs, and, trust us, there were a lot of them. Oil was coming out everywhere, and places that were supposed to have oil hadn’t seen lubrication since George W. Bush was in office.

AHM replaced all the seals and re-sprung and re-valved both the shock and fork for motocross. The fork tubes received some coating bling to give them a modern grey look, and the shock body was coated black with a new spring to match.
As we mentioned before, the engine had seen better days. It was locked up solid when we got the bike, and upon tearing it down we found out the OEM piston skirt had broken off. Naturally, this ended up in a million pieces throughout the engine, requiring us to get all-new parts. Most of the items used in the engine rebuild came from Wrench Rabbit, including all the seals, bearings, gaskets and complete crank assembly.

Since we had to send the cylinder to Millennium Technologies to be repaired anyway, the decision was made to make it a big bore. And, if we were going to go big, we might as well have Tom Morgan (who just happens to work at Millennium) do some magic on the top end as well. Yep, this bad boy would be running on straight VP Race fuel from now on. A Moto Tassinari V-Force reed cage was added to monitor the fuel intake, with a Hinson complete clutch getting all that new big-bore power to the ground. There aren’t very many companies making aftermarket ignition or clutch covers, so we just had the stock units powdercoated by Chris Johnson at San Diego Powder Coating.

Giving our 2003 CR125R an updated look was the main focal point of this build, and Polisport made that process relatively painless. Their new Honda CR two-stroke restyle kits will fit 2002 through 2007 CR125R and CR250R models. The kit included everything we needed to transform our 15-year-old CR125R into what a new CR125R would look like if it rolled off the assembly line today.

Wheels always change the overall look of the machine. On the restyled CR125R, Dubya laced up a set of red Talon hubs to some black D.I.D Dirt Star STX rims and accented them with anodized red spoke nipples. We wrapped those with the new Dunlop MX33 tires and mounted Galfer rotors with an oversized unit up front for additional stopping power. Other bolt-on items that added to the overall look included red Samco silicone radiator hoses, Works Connection controls with an assortment of bling items and red Galfer steel-braided brake lines. It was all held together by Specbolt’s all-new Nickel Wurks complete bike bolt kit. Decal Works topped off the build with a semi-custom graphics kit and gripper seat cover.

PRESENT DAY
The 2002 through 2007 Honda CR125R styling was almost identical. About the only changes made were cosmetic. On this build we wanted some shock value without going through a complete frame swap. Our build turned out to be not only a looker but also a ripper! The engine has tons more power than it did in 2003, and all the suspension upgrades that AHM did perform better than expected.

We come away from this build learning a few new things about CR125R models in general and are always surprised by how many items off current models will bolt right up to models made 15-plus years ago. The one major problem that surfaces after a build like this is, no one wants to be the first person to get it dirty. But once it’s dirty, everyone wants a turn. This machine looks like it belongs in the 2018 model lineup, and if Honda made something like this today, everyone would be lined up, cash in hand, ready to buy every unit made.