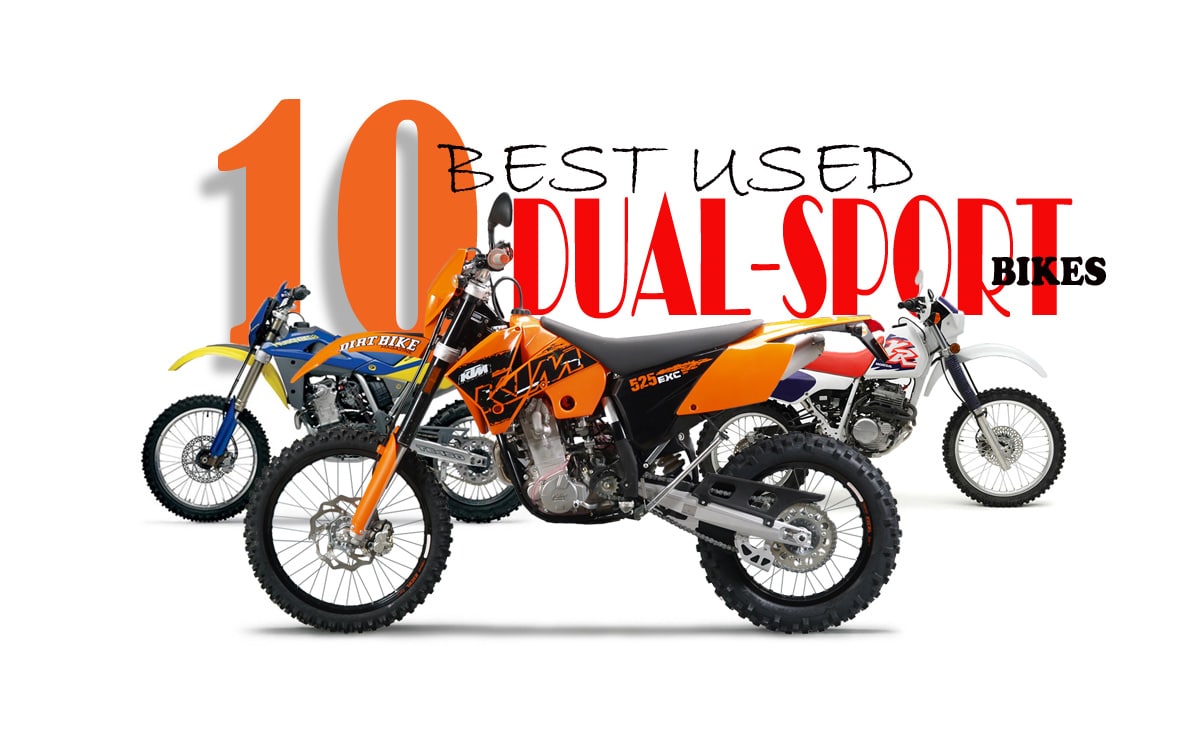 Today, dual-sport bikes are spectacular. They’re on par with dedicated dirt bikes in performance, weight and technology. But man, are they expensive! It’s tough to get out the door with a new Beta, KTM or Husky for under $10,000. That sends most of us to the used-bike market looking for deals.
This list is dedicated to bikes that are at least 10 years old. They are rated in terms of value and and dirt-riding capability. The bikes chosen represent the middle of the bell curve in terms of size. We haven’t included big adventure bikes or small RV bumper bikes. 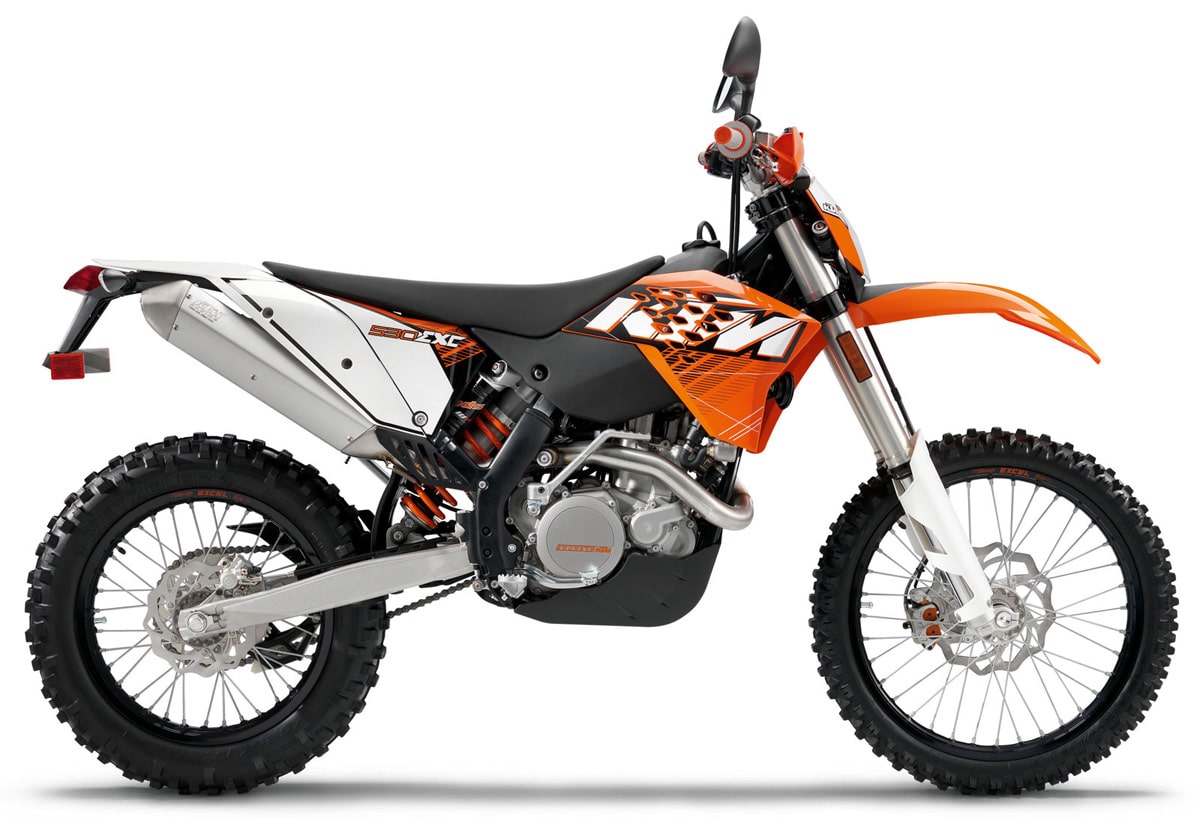 1 KTM 450, 530  (2008 & LATER)
We are forced to put these bikes at the top of the list because they’re so stinkin good. But they aren’t cheap. Finding an old EXC for sale is tough, as people tend to hold on to them until death. So expect to pay a premium of around $6000. The reason that the KTM sits so high on a list of bargains is because you can expect to recoup your investment when you sell the bike. If you sell the bike. For a feature on the 2010 KTM 530, click here. 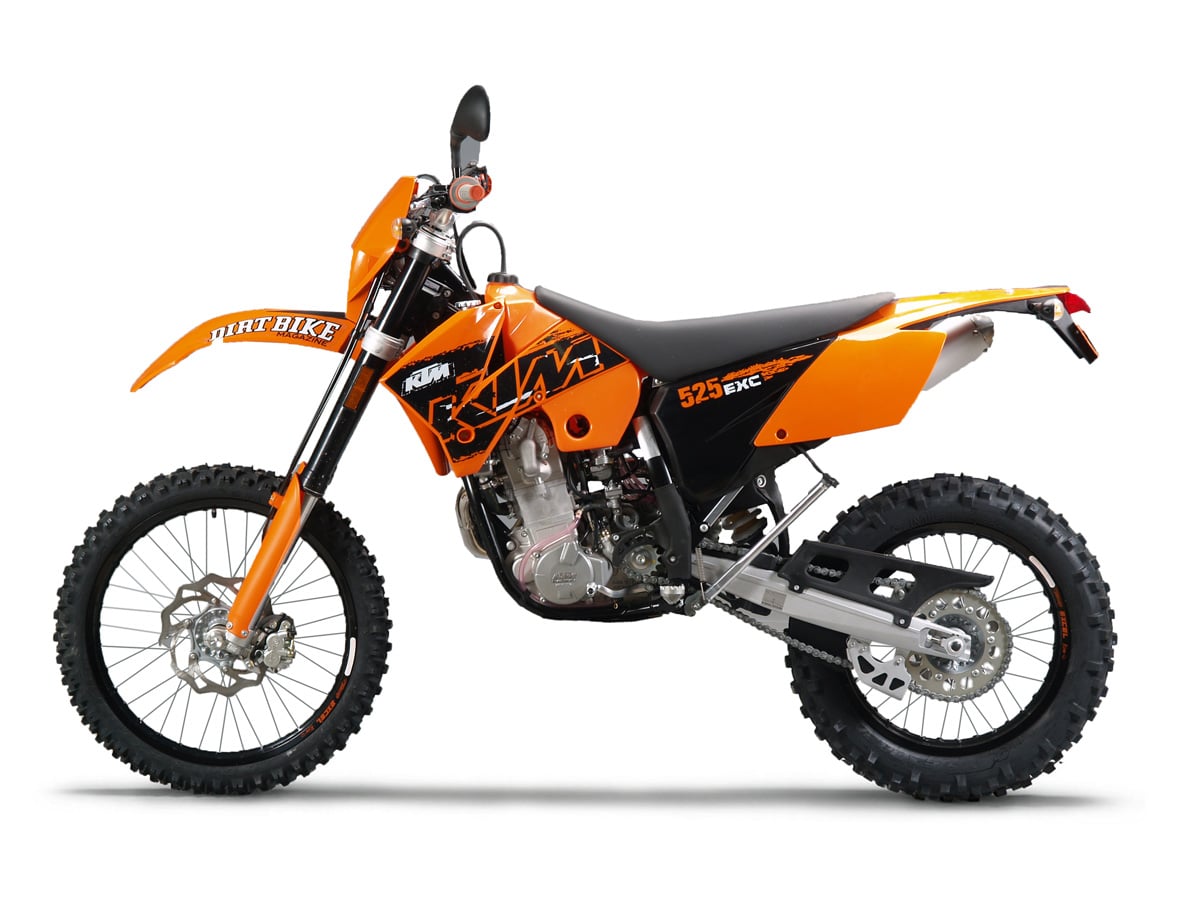 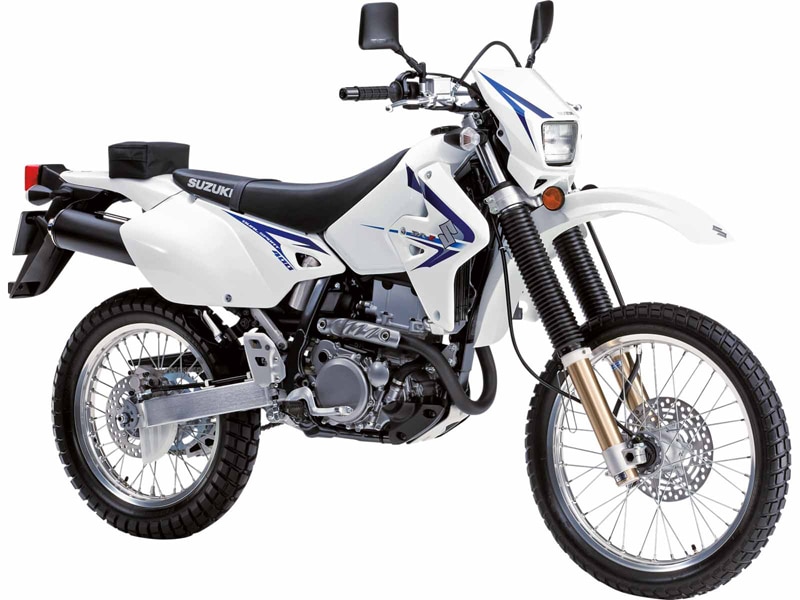 3 SUZUKI DR-Z400SE, (2000 & LATER)
The Suzuki was and still is an excellent bike, just rather old-school compared to the KTMs that sit higher on the list. It’s simply not as light, powerful or well-suspended as more modern dual-sport bikes. But the price is right. A Suzuki DR-Z in good condition can be had for around $3000. Age and condition play a big role because the Suzuki has gone virtually unchanged through its long production run. 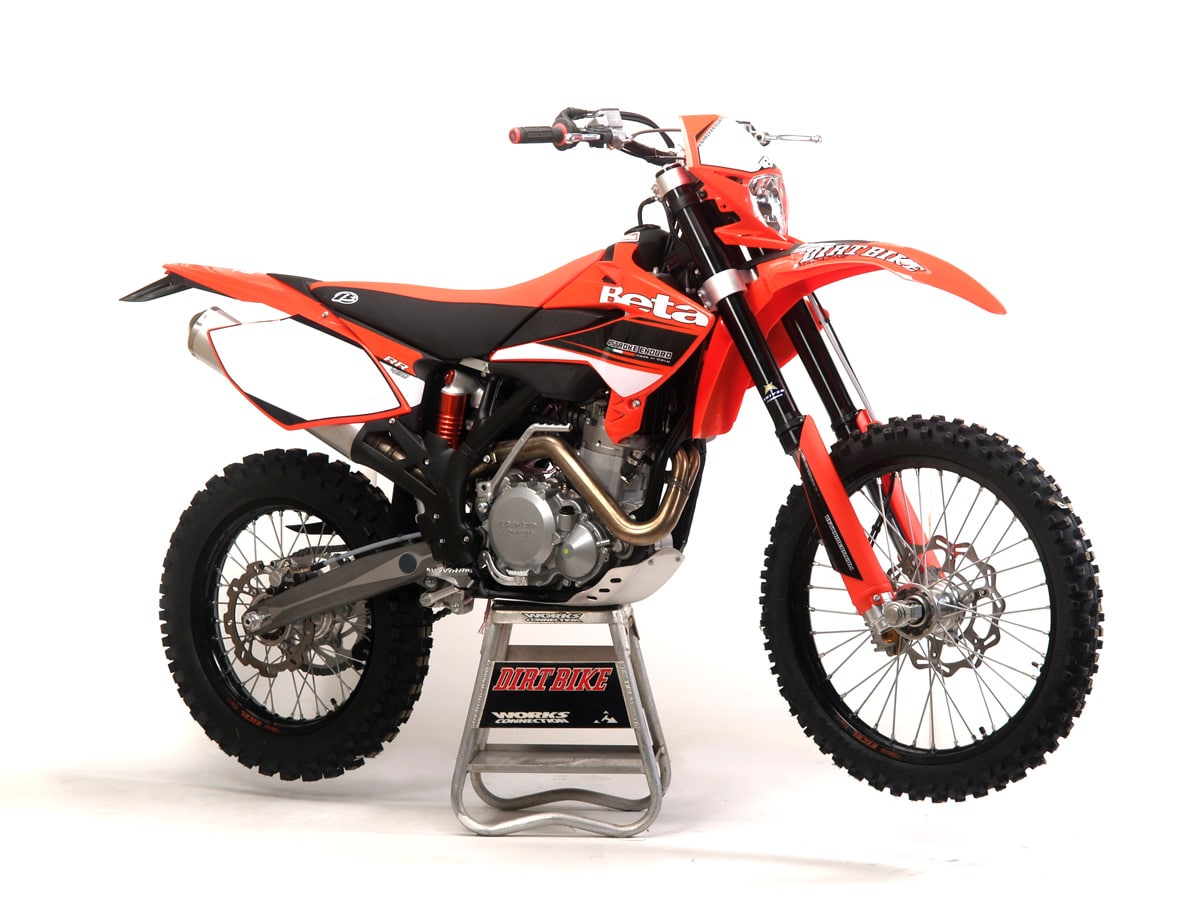 4 BETA RS450, RS525 (2008 – 2010)
This bike makes the list because we love it. But you’ll probably never find one. In 2008, KTM had a new motor for its own dual-sport bike, but continued producing the older RFS motor for Beta. The RS line was 100 percent street legal and the motor was spectacular. Unfortunately, there were probably less than 100 imported in ‘08. Numbers got only slightly better as time went on. Beta would produce its own motor in later years. This photo is of the dirt-only RR model from ‘08. 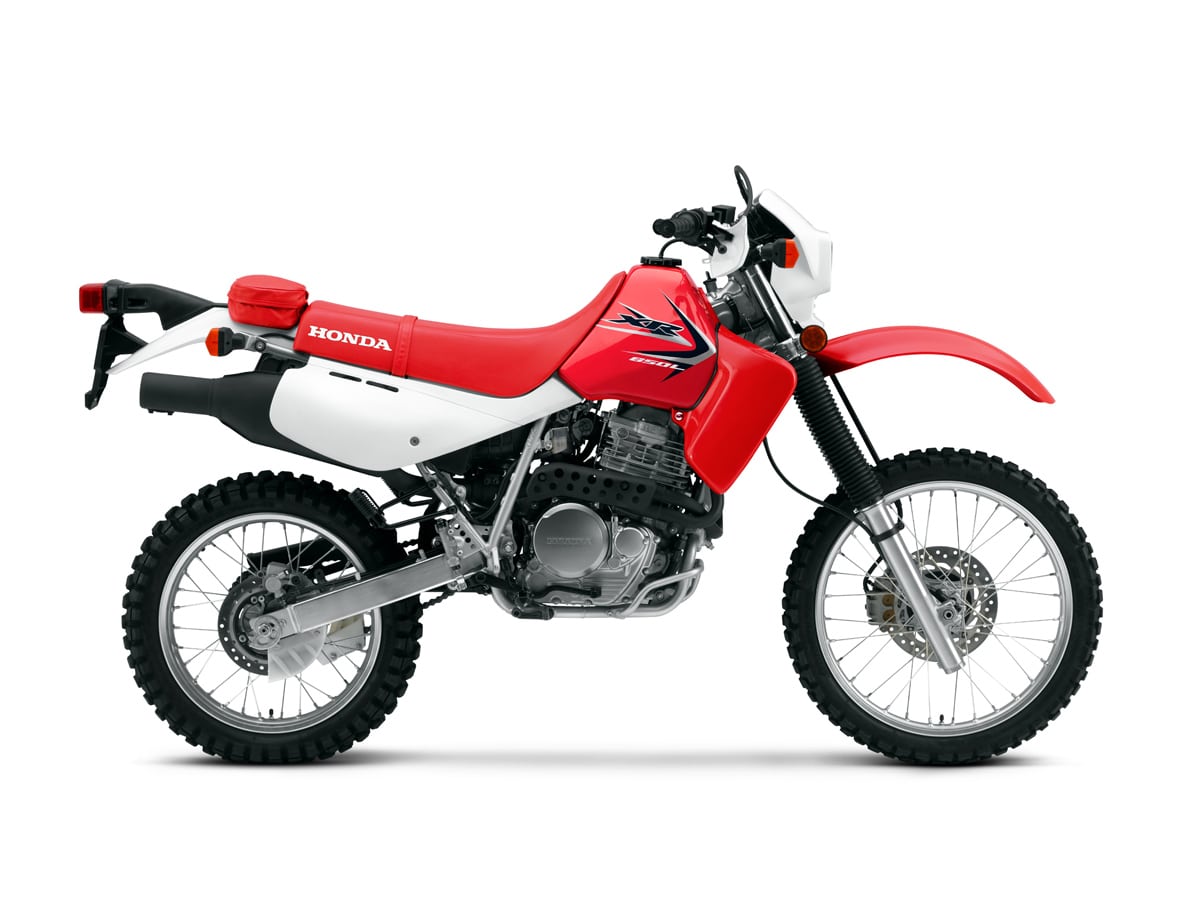 5 HONDA XR650L (1992 & LATER)
This bike was the virtual definition of dual-sport for decades. It’s gone unchanged since it was introduced in 1992. That’s quite a run. Today, it feels very old fashioned, but if you get around the rider ergos, you’ll find that it still works very well. In fact, the suspension is excellent. If left unmodified, the air-cooled motor is unbreakable. Price can be anywhere, but keep in mind that a brand new one has an MSRP of $6899.

For a 650 shootout including the Honda XR650L, click here. 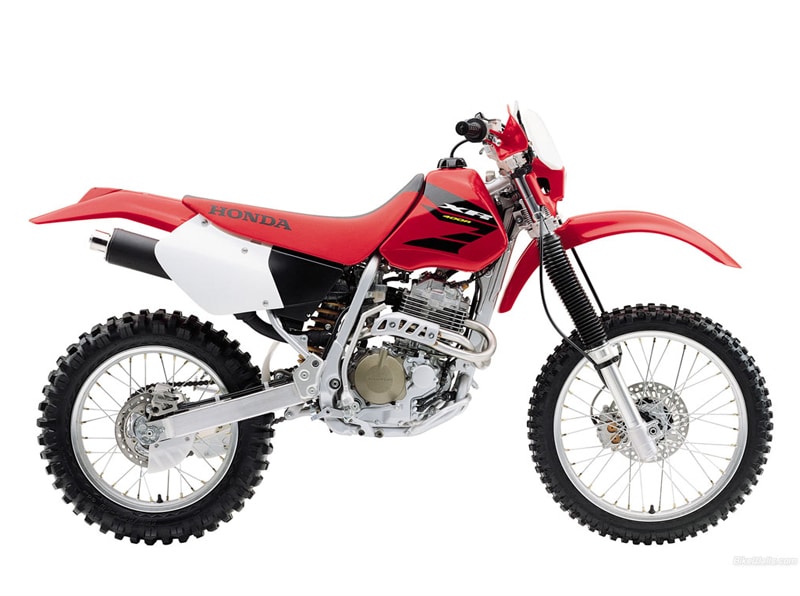 6 HONDA XR CONVERSIONS (1996 & LATER)
These are somewhat high-risk buys in some states. In California and Nevada, it’s possible for the DMV to change its mind and revoke a license plate, even if it’s been on the bike for years. In states that don’t care, like Arizona, Vermont and Florida, you can usually get a license plate for a toaster. The bottom line is that if you live in a strict state and your XR400R, XR600R or XR650R has a license plate in good legal standing, it can add $1000 to the worth of the motorcycle. But it can be gone tomorrow. 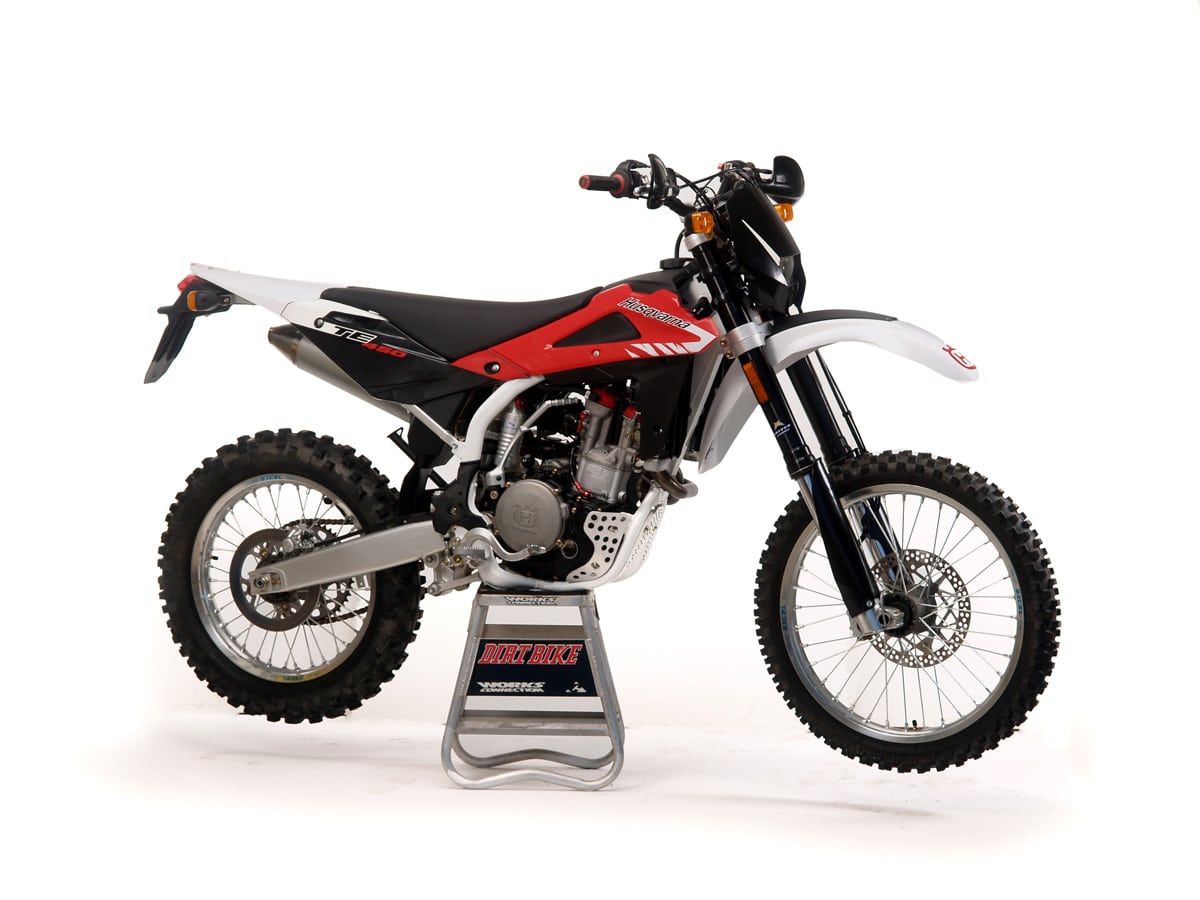 7 HUSQVARNA TE510, 450 (2006 & LATER)
In 2006 Husqvarna was the first company to make its regular dirt bike street-legal with minimal DOT equipment. It was a great motorcycle, but exceedingly rare. BMW didn’t buy Husqvarna until 2007, and quantity and quality didn’t improve until years later. But any 2006 Husky you find will have the bugs worked out by now and is worth around $3000. Parts availability for Italian Huskys is OK–for now. It should be noted that this bike has been brought back to the market by a company called SWM. For more on SWM, click here. 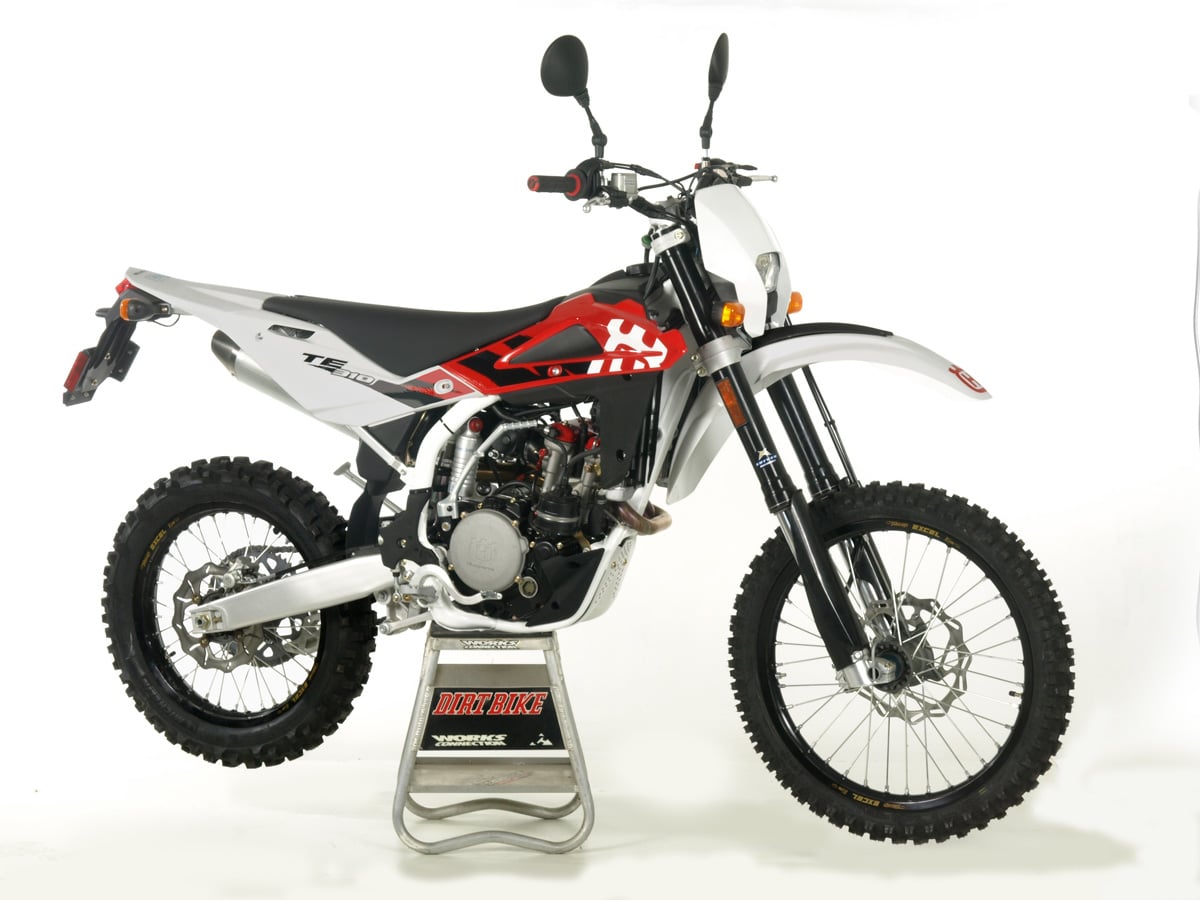 8 HUSQVARNA TE250, TE310 (2006 – 2009)
Good luck on finding a street-legal Husky TE250 from 2006. They only imported a handful. It was a fine bike, and there were more made as time went on. In 2010 it was replaced with an all-new fuel-injected motorcycle, but it was slower that first year. The TE310s and 250 that came later were fantastic, but newer and more expensive than the bikes we’re dealing with here. Expect to pay about $2800 for a TE in good shape. There were very few 310s based on the carbureted motor, but they’re worth around $3500. 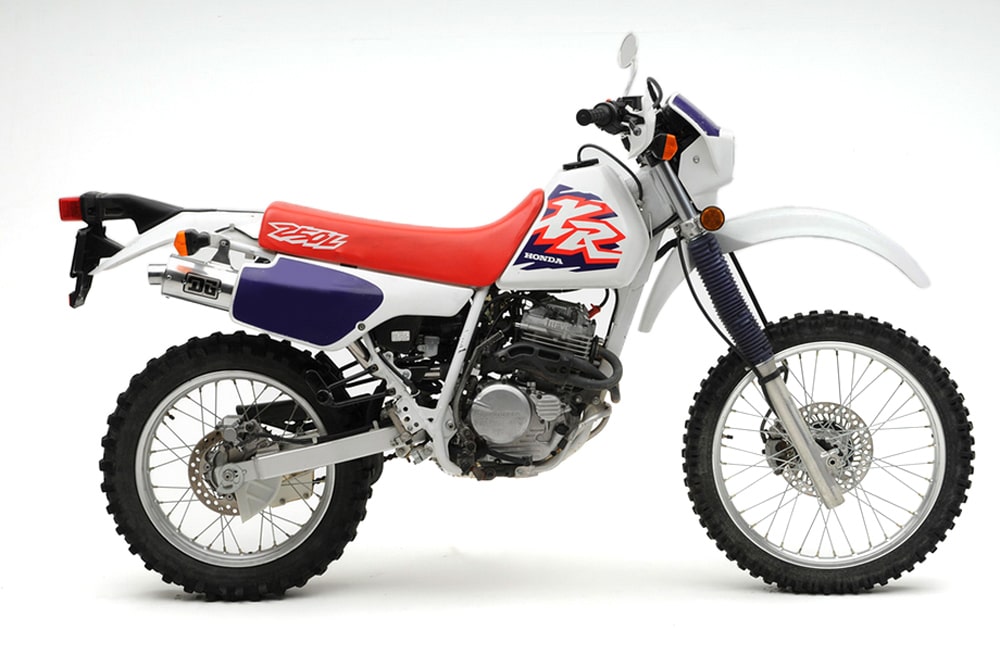 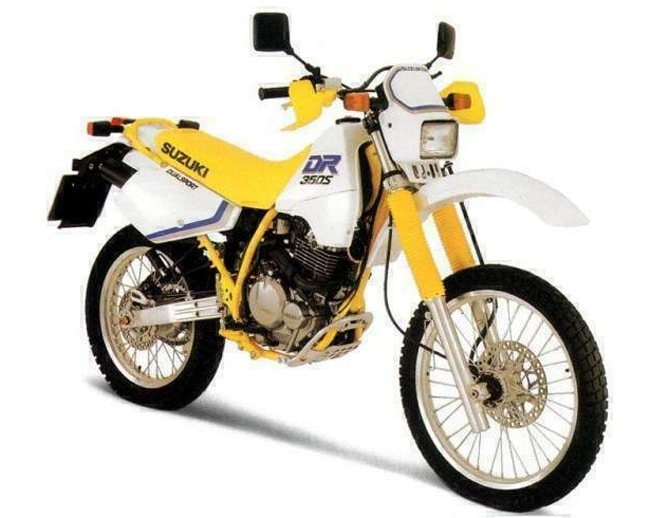 10 SUZUKI DR350SE (1991 – 1999)
The DR seems somewhat forgotten these days, but it was a beloved bike in its day. The DR was the object of massive hop-up attempts back then, but it resisted them all. It was at its best in stock form. It was an electric-start, air-cooled bike with decent power and suspension. Weight was its downfall, as was typical of dual-sport bikes back then. They’re out there in wildly different condition. A good one is worth $2000. A bad one is worth nothing.

For a complete buyer’s guide of 2019 dual-sport bikes, click here.

If you have a little more in the bank and don’t want to restore a 10-year-old dual-sport, you’re in luck–there are plenty of choices. Dual-sport bikes have been steadily improving despite increasing regulation and tighter emission standards. One trend, however, is disheartening. The bikes are steadily becoming more tamper resistant. You can modify anything,  but the newer the bike, the more difficult the task. Be wary of any used fuel-injected dual-sport bike with a competition exhaust. If it hasn’t been remapped, it will run worse than stock. Here are our top ten picks for used dual-sport bikes of the most recent decade, as judged by dirt-worthiness, performance, reliability and value

2012-2016 KTM 500EXC/350EXC
In 2012 we got the first of the fuel-injected KTM dual-sport bikes, but back then, the EPA rules for emissions and noise weren’t quite as tight as they are now. The EXCs still had kick-start levers and performance in stock configuration was decent. If you find a stock one, congratulations. Most are modified and not in a good way. Hop-ups are somewhat difficult–most owners either switch the black box with one from a Euro model or use a piggyback fuel modifier. If you can find a 450EXC Six-Days Edition, this is the best of the breed. The 350 is as good, but a little harder to find.

2011 KTM EXC
Back in 2011, KTM’s dual-sport bikes still had Keihin FCR carburetors. The 530 and the 450 were both available, but the 530 was more popular. Performance wasn’t that different and both ran well in stock form. If you want a little more performance, you can rejet the carb (a JD Jetting kit sells for about $80) and modify the stock exhaust. This bike finishes highly on this list simply because of value. You can find one in the $3000 range, but condition varys wildly on a bike this old.

2017-2019 HUSQVARNA FE350/KTM 350EXC
By 2017, the 350 motor had come of age. Both the KTM and Husqvarna 350cc dual-sport bikes were great, but be aware that in 2017 both bikes became much more bottled up. KTM was no longer considered a small factory that could fly under the EPA’s radar. Hop-ups require someone who knows his stuff. On the used market, you can treat the KTM and Husky 350s as fairly interchangeable. The Husky has linkage suspension whereas the KTM uses PDS, and there are differences in the airbox, the brakes and other components. Both are expensive to buy new and hold their value very well, but they are the best dual-sport bikes on the market when price is no object.

2015-2019 BETA RR-S
We consider the late-model Beta RR-S models the secret gems of the dual-sport class. There are four different sizes: 350, 390, 430 and 500. All are based on the same platform, only varying in bore and stroke. In 2015, Beta dual-sports got fuel-injection and it suited them well. The company is so small it gets a pass on many of the EPA emission and noise regulations, so you get a little more performance in stock form, and modifications are fairly easy. Beta four-strokes prior to fuel injection get a little rougher and cobbier the older they are. The very first Beta-made four-stroke motors were very difficult to start despite having electric start and kick-start.

2017-2019 HUSQVARNA FE501/FE450
No surprise here. The latest generation of the Husqvarna dual-sport bike is a great machine. The only reason it doesn’t finish higher is because of price. Even used, these bikes are often in the $9000 range. In motor performance, the bike is very quiet and restricted. It can be altered for more performance, but you have to know what you’re doing. It has a reed valve in the intake that decreases noise, and it actually gives the bike a little more low-end. Some riders take it out anyway, but you need to remap or it’s a step backwards. The 2017 model also lost its kick-start lever. The 2015 and 2016 FE-S models were also excellent, but imported in small numbers.

2017-2019 KTM 500EXC
Late-model KTM and Husqvarnas are very similar. The single biggest difference is the rear suspension. The KTM uses no-link PDS rear shock whereas the Husky uses linkage. Oddly enough, this is a factor if you want to hop-up the bike. The Husky accepts the less restricted air intake boot off the motocross bike, whereas the KTM doesn’t. Whether or not this is a good idea is debatable. Unlike Husqvarna, KTM doesn’t offer a 450 version of this bike in the regular line. There is, however, a limited edition 450EXC Six-Days Edition.

ANY YEAR SUZUKI DR-Z400S
This bike hasn’t changed since its introduction in 2000, and remains the best of the Japanese dual-sport bikes prior to the 2019 Honda CRF450L. Today, its main attraction is that it’s inexpensive. It’s impossible to pin down a price because the year is irrelevant. There’s a 20-year inventory of nearly identical bikes. And a brand new one is still under $7000. To bring the performance up to date, the most important modification is to replace the CV carb with a Keihin FCR.

ANY YEAR HONDA XR650L
This bike is an icon on wheels and if you give it a chance, it’s not too bad off-road. The suspension is actually good even by modern standards. But it’s heavy and the ergos seem like they came from horse and buggy days. The XR hasn’t changed since its introduction and there are a zillion of them on the used bike market.

2013 HUSQVARNA TE310
This was the best of the Italian Husqvarnas. It was light, compact and handled well. The reliability was a little suspect, but parts are still available. There weren’t that many of them imported, so the used bike selection is fairly thin. In 2014, KTM purchased Husqvarna and this bike became a footnote.

2011-2014 HUSQVARNA TE499
This bike was the final resting place of the Kymco-built  BMW G450X motor. It was super-weird, with a crankshaft-mounted clutch and a number of other oddball features, but most of its problems were worked out by the time it was phased out in mid-2014. It might be a bargain, simply because not that many people have even heard of it.