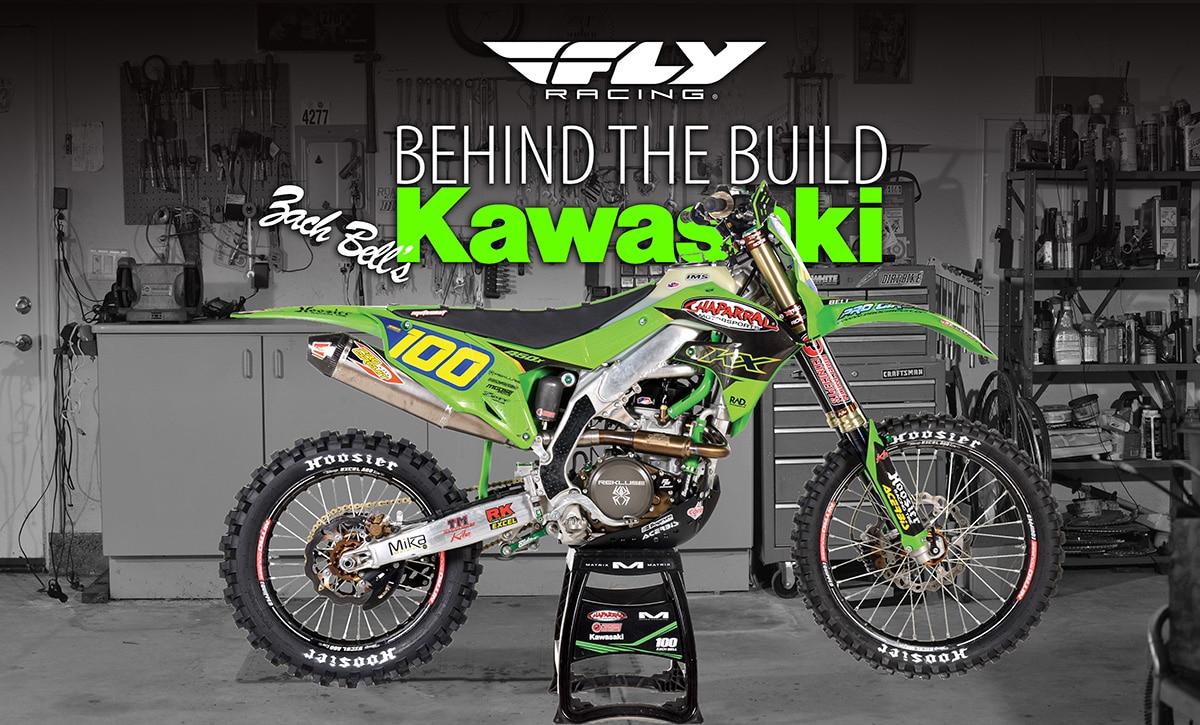 Zach Bell has been on factory-level race teams for a majority of his career. He was a part of the powerhouse Factory Connection Honda squad when he raced AMA SX and MX, then his transition into off-road was with the SLR Honda team. Bell has been on the Chaparral Precision Concepts Kawasaki team the last two years aboard the KX450X and at times seemed untouchable. We sat down with team manager Robby Bell (no relation) to take a closer look at what makes up Zach Bell’s factory KX450X off-road factory machine.

Most people familiar with off-road racing know that Robby Bell is not your average team manager. His racing resume speaks for itself. That being said, he has a lot of input on the race team’s machines, but admittedly tries to give each individual rider what works the best for them. Here is the information we were able to drag out of Robby. 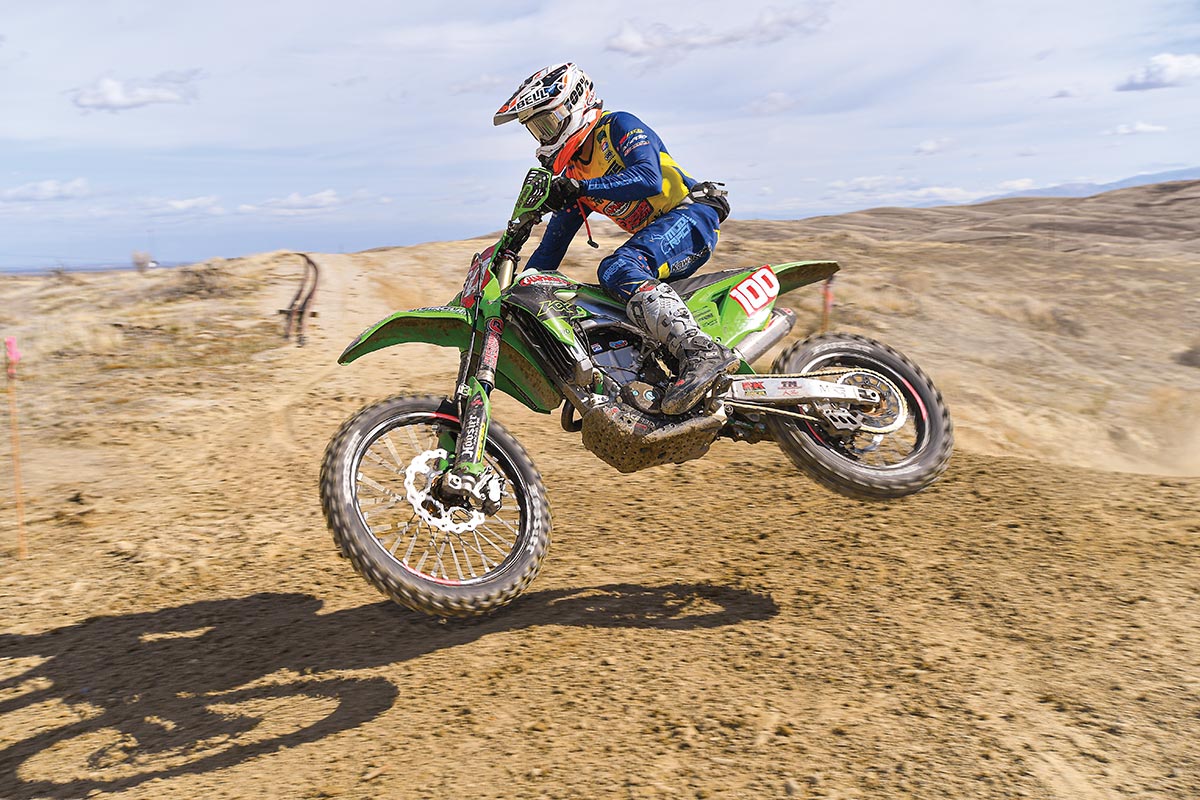 ENGINE
All of the race engines are completely torn down, and the components go through a Cryoheat process before being reassembled. This is a proprietary process that allows the metals to become stronger and more resistant to wear. While apart, the heads are cleaned up, but no major changes are made. The 2021 KX450X makes plenty of power stock, so our plan is to just harness that and make it usable for Zach. Just like with any factory machine, there are some specs not available for public knowledge.

Internally, Robby says the engine uses predominantly OEM Kawasaki parts, with the exception of a JE piston and Rekluse complete clutch and hydraulic slave cylinder. Zach prefers the Rekluse auto clutch that incorporates their Torq-Drive technology. The team has also come up with some mapping that not only smooths out the power delivery, it also offers improved fuel consumption. When it comes to power, Zach is all about something that is easy to control and smooth without any crazy-hard hit anywhere in the power curve, so all the modifications done are directed to make that happen.

The team runs a Pro Circuit exhaust that is pretty close to what the general public can purchase, with the exception of some additional protection welded on the head pipe. A Boyesen Supercooler, Moto Hose silicone radiator hoses and a slightly higher-pressure radiator cap are used to keep engine operating temperatures at an acceptable level on the track. “Zach doesn’t really rev the engine or abuse the clutch while racing, but it’s always better to be safe than sorry,” says Robby Bell.

SUSPENSION
A large amount of time has been spent in the handling department of Zach’s Kawasaki KX450X. The really interesting part is, unlike other factory Kawasaki race machines, nothing is unobtainable or outrageously priced, so the average consumer wouldn’t be able to afford it. As a matter of fact, if you have a KX450X, Bob Bell and the crew at Precision Concepts can give you a very similar setup.

Most races that Zach is competing in are close to two hours in length. Combine that with the fact that he’s not a very big rider, and you can imagine the spring rates probably aren’t that far from stock. Most of the magic happens in the valving, amount of oil used and the internal pistons monitoring oil flow. The team does use a performance link from Ride Engineering in the rear. They say it gives the bike a more planted feel and improves overall stability.

CHASSIS
The typical off-road race bike chassis can be a very unique blend of OEM parts and bolt-on aftermarket performance accessories. Unlike most MX bikes, the off-road race machine is more about function and less about bling. If it doesn’t improve lap times or protect the bike/rider from damage, you probably won’t see it. An Acerbis plastic skid plate offers both frame and engine-case protection, and the team adds an extra piece on the pipe side of the bike that protects against damage to the water pump. Handguards are a must on any off-road build, and Zach prefers the vented X-Future model.

TM Designworks products are a staple on most factory off-road bikes, factory level or not. Zach’s bike has a rear rotor guard, chain rollers, swingarm slider and rear chainguide. The team has the rear chainguide mounting points on the swingarm and the rear muffler hanger on the subframe reinforced. A larger IMS gas tank with a dry-break quick-fill system allows the tank to be filled in seconds during a pit stop similar to what you see during a NASCAR pit stop on TV. The team uses Nitro Mousse foam inserts to prevent flats, and they upgraded the wheels with Kite billet-aluminum hubs, stainless steel spokes and top-of-the-line Excel A60 rims.

2021 marks the first year of Hoosier Racing Tires’ involvement with the team, and they are working very close together to develop a tire combination specifically for off-road racing. Another must for West Coast off-road racing is a stabilizer, and Zach’s bike is a equipped with a unit from Precision Racing Products. Unlike other stabilizers on the market, this unit can be used with just about any triple clamp setup. The team uses an Xtrig complete triple with PHDS handlebar mounts.

THE BOTTOM LINE
The one thing we like about doing stories on off-road factory machines is that we get to ride them. You can imagine the response when we asked to take a couple of laps on Eli Tomac’s or Ken Roczen’s race machines. First thing we noticed about Zach’s race machine is how everything just flows together, even in the rider cockpit. Even though he is a smaller rider in stature, the bike is set up fairly neutral. The bike makes tons of power, but the delivery is so smooth, you don’t realize you are going fast until you have to slow down, and even that is smooth but powerful, thanks to the Ride Engineering billet-aluminum front caliper and Galfer brake rotors. Even though the IMS gas tank is larger than the OEM unit, it doesn’t give the bike a big, bulky feeling. We have tested Hoosier tires on MX tracks before, but haven’t had lots of time in off-road settings with them. However, we came away impressed with its performance on a wide variety of terrain.

The best way to describe the overall handling of Zach’s KX450X is “confidence-inspiring.” The longer you ride it, the more confidence you get, and the more you want to ride. It handles small stuff well and still has great distance to bottoming on big stuff. Usually professional-level race machines are so stiff that we can’t wait to get off of them, but that is definitely not the case with Zach’s machine. This is a bike setup that can be enjoyed by the masses, and you wouldn’t have to get a second mortgage on your house to afford it.