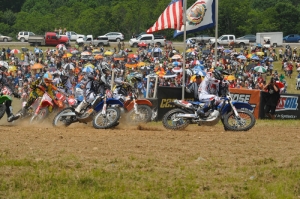 Masontown, W. Va. (May 27, 2012) – AmPro Yamaha’s Paul Whibley and Factory FMF/KTM’s Kailub Russell came into Round 7 of the Can-Am GNCC Series tied for the lead in the championship point standings, knowing that whichever rider finished up front would take over the lead. The temperatures were at an all-time high for the early summer months and after three exhausting hours of battle through the hot and humid woods of Marvin’s Mountain Top in Masontown, W. Va., it was Paul Whibley who edged out Russell for the class win, reclaiming the points lead to himself. Whibley now holds a mere five-point lead over Russell heading into the second half of the season. Amidst the intense XC1 class battles, F.A.R Husky’s Andrew DeLong and KR4 Performance’s Jason Thomas had a race of their own, and it wasn’t long before the XC2 Pro Lites front-runners had a place within the top five overall at the inaugural Mountaineer Run GNCC.

In addition to the high temps and blazing sun, the slick and rocky West Virginia terrain made for a demanding test of man and machine in the three-hour competition. Paul Whibley kicked off the day grabbing yet another $250 Motosport.com Holeshot aboard his AmPro Yamaha YZF450. It wasn’t long before fellow kiwi Rory Mead put his WMR/KTM into the lead and quickly put a 30 second lead on the field as Whibley, Charlie Mullins and Russell figured out the early pace.

Photo By: Ken Hill
Whibley took the victory and holds the points lead

“I had no idea Rory was even leading until I got the pit board from my crew saying that he was over 30 seconds ahead of us,” Russell admitted. “After that, we got going and caught up to him by the second lap.”

Factory FMF/KTM’s Charlie Mullins was running with Mead, Whibley and Russell for the first two laps of the race until he all of the sudden disappeared from the lead pack. Mullins experienced mechanical issues with his motorcycle and was stuck in the woods for a majority of the race, until GNCC track officials towed him back to the pits. Mullins and his FMF/KTM team didn’t know what the problem was at the time.

Whibley and Russell eventually made their way around Mead by the halfway point and the lead duo battled it out for the coveted points lead in the second half of racing. “The track was really rocky and technical but I had a lot of fun out there,” Russell said. Whibley eventually picked up the pace and pulled a gap on Russell but coming into the final lap in the three-hour battle, the victory was still anyone’s game. Whibley put a final charge at the end, besting Russell for the Mountaineer Run GNCC win and the honors of keeping the points lead for yet another round of racing.

“The track was pretty gnarly out there,” said Whibley. “Like I said before, I usually prefer the softer dirt over the rocks and rough stuff but today’s win was good and I’m happy to hold on to the points lead for sure.”

New Zealand native Rory Mead came in third for his third podium finish of the season. Mead is known for his ability to ride technical terrain and the Round 5 winner proved this to be true as he led the early stages of the race. Mead holds on to the fourth place position in standings, only trailing Mullins by three points.

Andrew DeLong and Jason Thomas set their sights ahead from the get-go as the two former teammates put on a clean and competitive show for the West Virginia spectators. It didn’t take long for the XC2 Pro Lites duo to make their way into the top of the overall runners, eventually pushing their way inside the physical top five by the end of the race.

Shenandoah Honda/Offroadchampion’s Thad DuVall rode just off pace of the leaders and once again put in a solid performance to take home fourth place in the XC1 class. DuVall struggled with his bike set up for the early parts of the race but after coming through the pits to make adjustments, DuVall seemed to ride more comfortably. Thad holds the fifth place position in the overall point standings.

Japan National Cross Country champion Takeshi Koikeda (KTM) put in a season-best finish of fifth place in the rough West Virginia terrain, just ahead of Florida’s Garrett Edmisten (KAW). Koikeda and Edmisten swapped positions throughout the afternoon but it was the JNCC champ who came out on top this time.

XC2 Pro Lites point leader Steward Baylor Jr. was forced to sit out at Round 7, due to a previous hand injury. Baylor still tops second place’s Jason Thomas in the standings after today’s absence. Jesse Robinson holds third place in the standings after a third place finish this weekend. Obermeyer Yamaha/Raines Riding University/Offroadviking.com’s Brad Bakken grabbed the $100 Motosport.com XC2 Holeshot Award but ran into problems after that. Bakken’s teammate, Jedediah Haines, is coming off his first-ever XC2 podium finish at Round 6 and secured fourth in the class behind Robinson. Waynesburg Yamaha’s AJ Stewart put in a season-best fifth place finish with an impressive ride in front of his hometown crowd.

The battle for Top Amateur honors has been intense all season long and it was 250 A class winner Grant Baylor, who claimed it this weekend with an impressive 12th overall. Fairmont, West Virginia’s Layne Michael led Baylor for most of the race, but a last-lap pass put Baylor into the class lead and the top finishing amateur spot. Michael followed close behind in 14th overall in front of his hometown crowd as well.

It was the Master’s A (50+) riders who topped the overall morning podium with Tennessee’s Mark Patterson (SUZ) leading the way. Maryland’s Randall Riggs followed close behind with second in his class and on the overall podium. Riggs then went on to compete in the three-hour afternoon race, where he finished an impressive 17th in the 250 A class after already conquering two hours of intense racing in the morning. Super Senior A (40+) saw a new winner this weekend as Ohio’s Rick Matteson took the class win, as well as the third spot on the overall podium.

Indiana’s Mike Witkowski (KTM) grabbed his fifth win of the season in the Super Mini (12-13) class and landed on top of the Youth Overall podium once again. Pennsylvania’s Thorn Devlin (HON) made his first Youth Overall podium appearance with a second place finish, while also securing the Super Mini (14-15) class win. West Virginia’s Cody Pingley (HON) came in a close second to Devlin in the (14-15) division and landed the final position on the overall podium.

Round 8 of the 2012 Can-Am Grand National Cross Country Series heads to Snowshoe, West Virginia June 23 and 24 for the Can-Am Mountaineer Run GNCC. For more information, go to www.gnccracing.com.