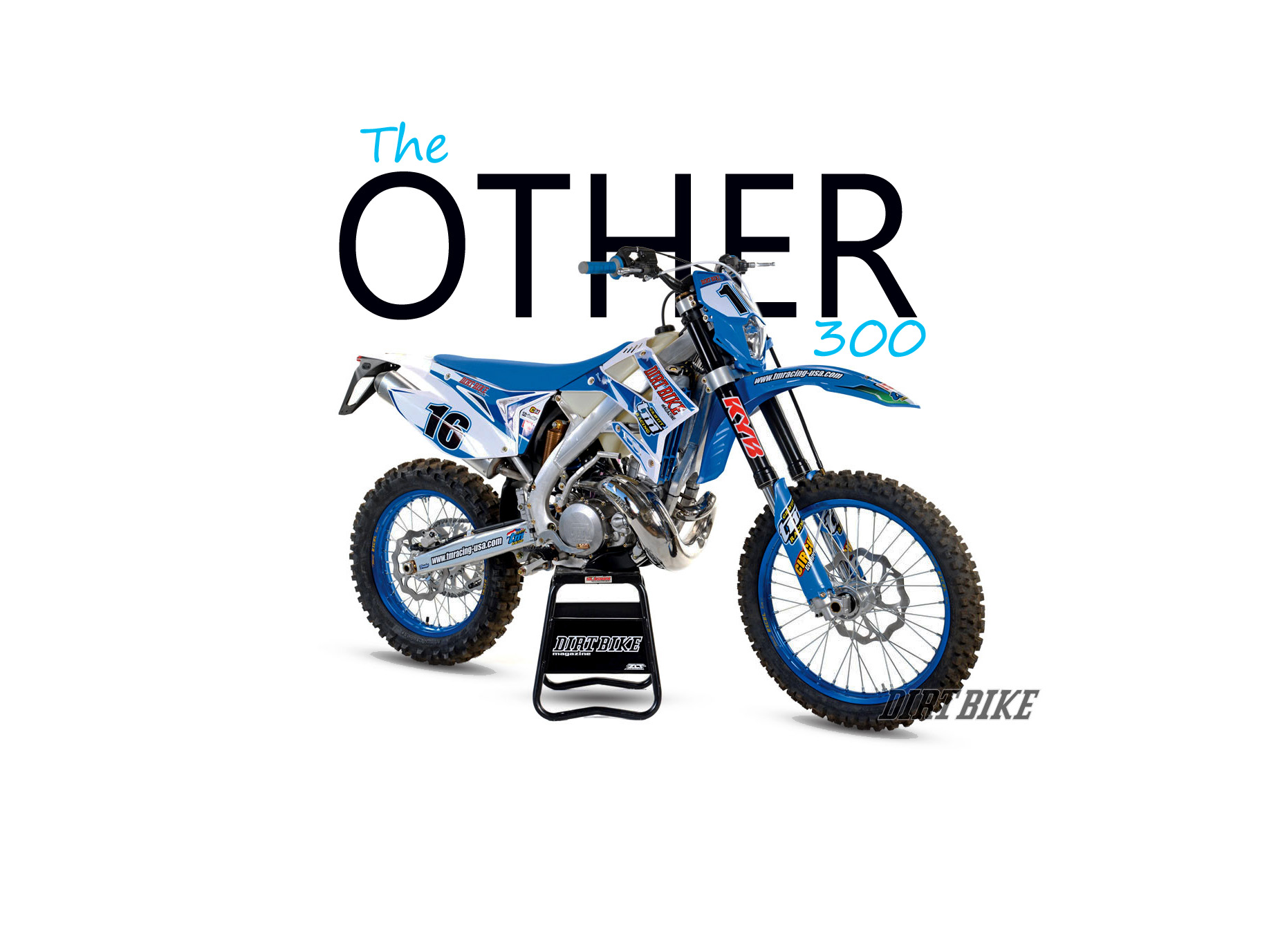 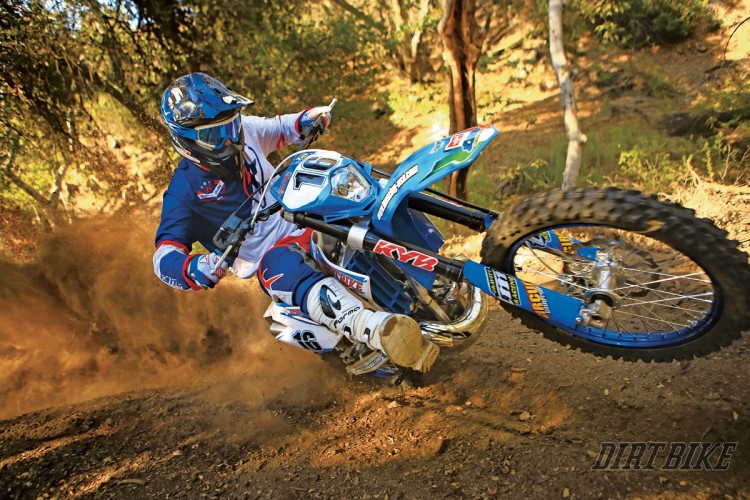 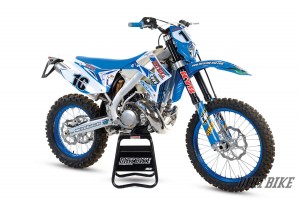 You can be forgiven if you have never seen a TM Racing motorcycle. Part of the allure of these rare Italian machines is the fact that they are scarce, expensive and exotic. We don’t get much exotic in the dirt bike world. Most of the products come out of five factories, whereas in the auto world they have a litany of dazzlingly expensive Ferraris, McLarens and so forth. The TM can justifiably be called the Ferrari of the dirt bike world for three reasons: it’s expensive, it’s beautiful and it’s fast—very fast.
TWO-STROKES LIVE
Last year the EN 300 got a new two-stroke motor, but it’s not the type of “new two-stroke” that Internet minions have been calling for. It’s not direct injection or even electric start. The engineers at TM are purists who love the two-stroke design for its traditional virtues. Fuel injection still requires heavy fuel pumps and batteries, especially in the case of direct injection. TM even turned its nose up at the electric starter in order to keep the weight down. Thus, the new motor is a somewhat old-school case-reed design with a five-speed gearbox. Its most sophisticated feature is the servo-controlled electronic power valve. If you remember, Honda had moved to this type of mechanism just before abandoning the two-stroke altogether. You might say that TM picked up where Honda left off.
The most impressive aspect of the motor is that it’s hand-assembled. The cases are sand-cast like those of a prototype or a works motor. This is a bike built in a race shop, like HRC without the big Honda factory next door. That’s even more clear when you take a close look at the chassis. It has what looks a little like a modern Japanese aluminum frame until you look carefully. The welds are all beautiful, clearly made by an old-world craftsman. Japanese frames have two or three hand-made welds in places that can be seen easily, and the rest are made by soulless robots. Look under the engine cradle and you see welds that are downright embarrassing. Not on the TM frame. Every weld is so well-done it should be signed. For the select few who are familiar with the 2015 TM, the biggest change for 2016 is the frame. It looks the same, but the geometry has been altered somewhat to make the handling more responsive.
TM also makes a large number of its own parts in true craftsman style. The triple clamps are billet aluminum, the rear brake lever is nicer than anything on the aftermarket and, most amazing of all, the rear shock is made by TM. In front it has a KYB fork similar to the one found on a Yamaha. The rear brake is by Nissin, the front is by Brembo, the rotors are Galfer, and the hydraulic clutch is Magura.
This particular model is an off-road racer, similar in purpose to the KTM XC line. But in some countries it’s street-legal, thus it has lights and a horn. The tires are Mitas FIM Enduro-legal, which are Europe’s version of DOT rubber. TM augments the motocross-style Kokusan ignition with a bolt-on flywheel addition and a lighting coil mounted to the ignition cover. Even with all that, it’s the lightest 300cc off-road bike in that somewhat limited class. On our high-tech super scale, accurate to within 0.005 stone, the TM was 224 without fuel. 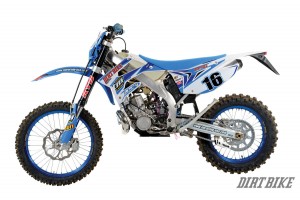 YES, IT’S FAST
Our experience with TM Racing motorcycles in the past has always had one common element—they’re fast. This one is no different. When the 300 is in the meat of its powerband, look out. You’re going to go wherever you’re pointing very quickly. It’s clear that the engineers don’t want to leave anything on the table that might give 450 four-strokes an edge. Down low the power is a little soft, but then it hits hard and fast. It feels like a motor that has already made a trip to a high-dollar engine porting specialist.
When the traction is good, the TM is a rocket sled. But it’s demanding. The power not only comes on a little late, it signs off early. You can outrun a 450, but only if you time your shifts just right. The hard hit is moderated with a heavy flywheel, which helps in low-traction situations. But you have to know what to expect. The mixture of a hard hit and heavy flywheel gives a delayed reaction to the throttle. If you’re familiar with two-stroke motocrossers that have been converted to off-road use, you know the drill.
What we didn’t expect was how comfortable the new TMs are. Here’s a secret we learned from our rich friends: Ferraris aren’t comfy. They’re little like a Russian sub, and made to be very functional but devoid of any unnecessary fluff. The TM, on the other hand, is surprisingly posh. The seat is firm but comfortable, the ergonomics are roomy and the controls fit right. The suspension is fairly cushy too. We expected Russian-sub harshness, but we got well-balanced comfort. For 2016 the frame changes were accompanied by a complete suspension rethink. The stink-bug attitude that all European bikes seem to have is gone. The rear suspension is softer and the fork is stiffer. It’s firm-feeling at low speed on the trail, but perfect for a cross-country race pace. On a motocross course you quickly overshoot the TM’s envelope of effectiveness. It doesn’t bottom with a noisy clank, but it gets to a portion of the travel that’s so stiff it might as well have bottomed.
IN THE BIG PICTURE
It’s clear that the TM was built with racing in mind. The hard-hitting power, the demanding attitude and the race-oriented suspension all point that way. It also demands a thoroughbred diet. Pump gas isn’t recommended. You can get away with the 91-octane swill that comes from American pumps on a casual trail ride, but race speed demands a good octane booster at the very least, or a half-and-half mix of race gas optimally. If you don’t have the good stuff, it will let you know with a polite level of detonation.
We understand that. Such a restriction would be inappropriate for a mass-manufactured motorcycle, but if you’re a TM buyer, you’re probably a guy who buys race fuel anyway. The bike has a suggested retail price of $9100, and, beyond the initial price, there are the demands of owning an obscure make. You can’t type “TM EN 300” into the search engine at Motorcycle Superstore and come up with much in the way of parts. The good news is that TMs have a reputation for being reliable, and the new U.S. importer is passionate and knowledgeable. Answers come quickly and easily.
At the risk of stating an obvious cliche, the TM isn’t for everyone, but it is for someone. It’s made for very few, a very select group of riders who don’t want to ride everyone else’s motorcycle. Luckily, that’s all TM can make. TM has a new distributor in the U.S.: www.tmracing-usa.com.