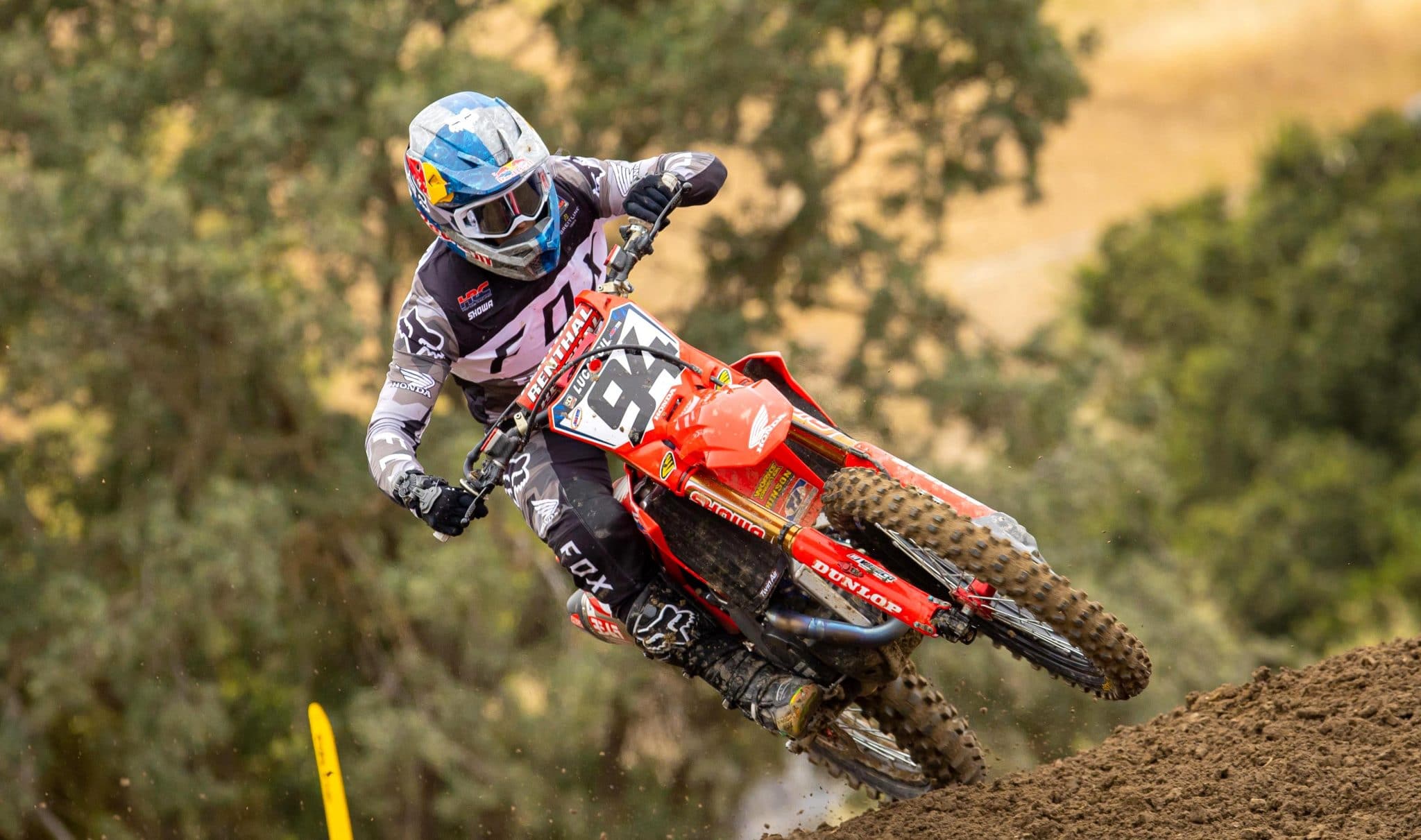 Red Bull KTM’s Antonio Cairoli nailed the holeshot but was quickly passed by Honda mounted Ken Roczen for the lead. Troy Lee Designs Gas Gas rider Justin Barcia would run up front early but eventually drop to sixth position by motos end. Local favorite Eli Tomac would put on a riding clinic in moto 1 coming from outside the top five eventually passing Ken Roczen for the lead in the closing minutes of moto 1. Monster Energy Kawasaki Jason Anderson had a scary moment hitting a course marker on the start straight while battling with Eli Tomac. Anderson would finish the moto in third ahead of Monster Energy Honda’s Chase Sexton. 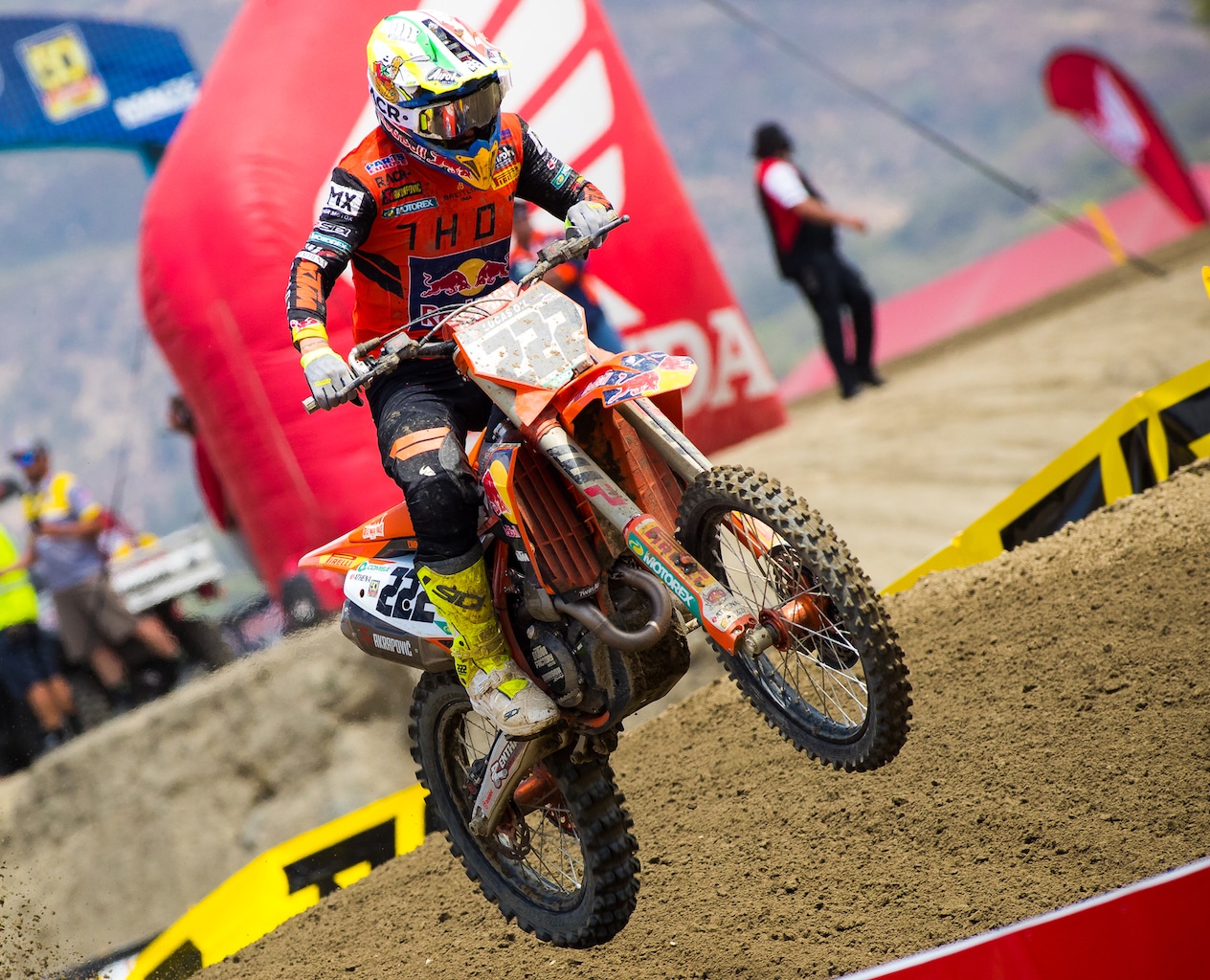 Antonio Cairoli once again got the holeshot aboard his Red Bull KTM in moto 2 but just like in the first moto was quickly passed by Honda’s Ken Roczen for the lead. Chase Sexton passed Cairoli and Roczen on his way to the front. Cairoli finished a solid fourth and with 5-4 moto scores he was fifth overall for the day. Cairoli’s KTM teammate Ryan Dungey finished sixth overall with very consistent 7-7 moto finishes. First moto winner Eli Tomac could only muster up a third in moto 2 for second on the overall podium for the day. Chase Sexton had the moto 2 win in the bag but went down in a corner on the last lap handing the moto win and overall victory for the day to his HRC teammate Ken Roczen.

In the first moto Star Racing Yamaha rider Levi Kitchen got the holeshot and would lead every lap on the way to his first AMA Pro Motocross moto win. Red Bull Honda’s Jett Lawrence would settle in to second place early while Star Racing Yamaha Justin Cooper would join his teammate Kitchen on the moto podium with a solid third place finish. 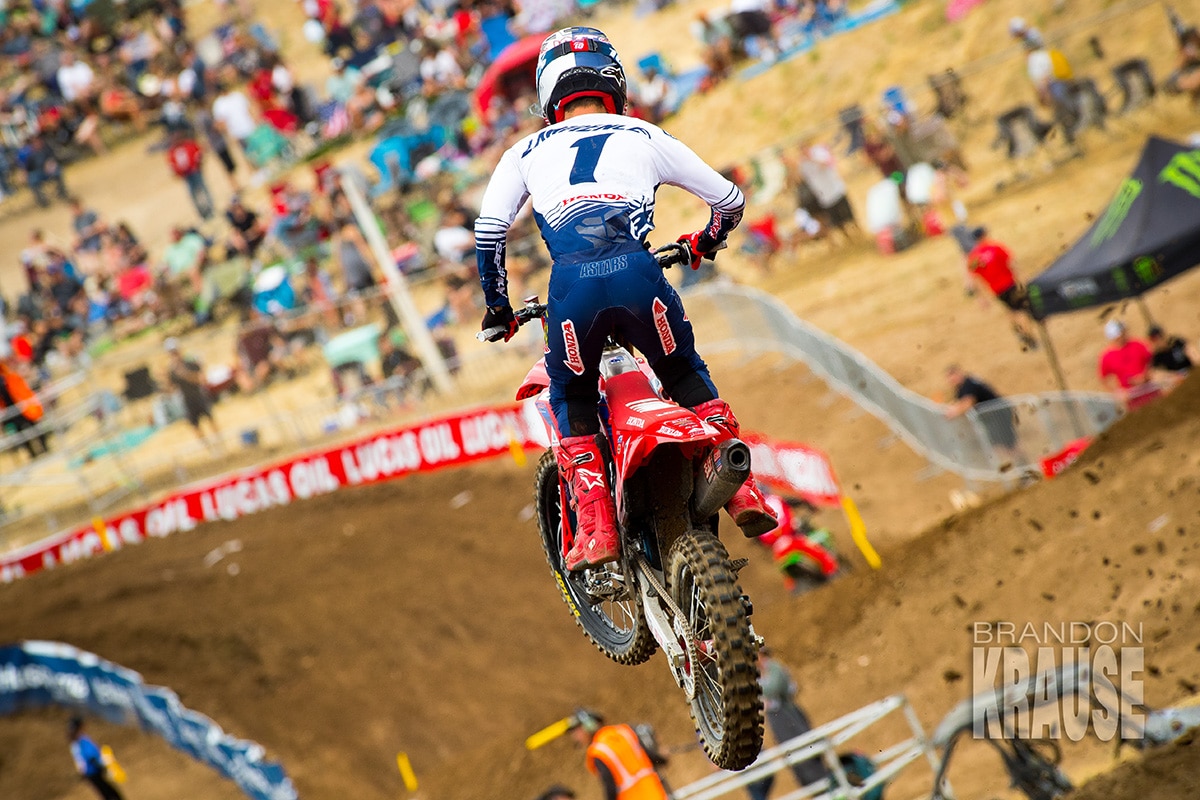 Factory HRC rider Hunter Lawrence finally got a holeshot in moto 2 and just like Levi Kitchen in moto 1 would lead every lap on his way to a moto victory. Hunter’s brother and Honda teammate Jett Lawrence again found himself in second position but this time received some pressure from Star Racing Yamaha’s Justin Cooper late in the moto. Lawrence would hold off the hard charging Cooper for second in moto 2 and claim the overall victory for the third time this season with 2-2 moto finishes. Justin Cooper went 3-3 on the day but was bumped off the overall podium by his Yamaha teammate Levi Kitchen’s 1-5 moto finishes.

Check out the complete video of Pro Motocross 250/450 qualifying sessions from Thunder Valley in Colorado. Top 30 results in both classes are also below.

Honda rider Chase Sexton was the fastest rider in 450 class qualifying in Colorado and was the only rider to run a 2:14. Local favorite Eli Tomac put down a 2:15.3 late in the final qualifying session for second and Factory HRC rider Ken Roczen would claim third with a 2:15.6. The Red Bull KTM crew continues to impress with Antonio Cairoli qualifying fifth, Aaron Plessinger in tenth and Ryan Dungey right behind him in eleventh. Honda, Yamaha and Kawasaki factory teams also had two riders qualifying within the top ten. We have to give Kudos to Dirt Bike Magazine test rider Richard Taylor for qualifying 30th overall in the stacked 450 class.

After coming out strong last week at Hangtown winning a moto aboard his Troy Lee Designs Gas Gas Micheal Mosiman showed some serious speed in qualifying taking top honors in the 250 class at the Thunder Valley facility in Colorado. Mosiman was the only rider to run a 2:16 lap time as you can see below all the other riders within the top five were all in the 2:17 with Star Racing Yamaha rider Levi Kitchen rounding out the top ten with a 2:19.