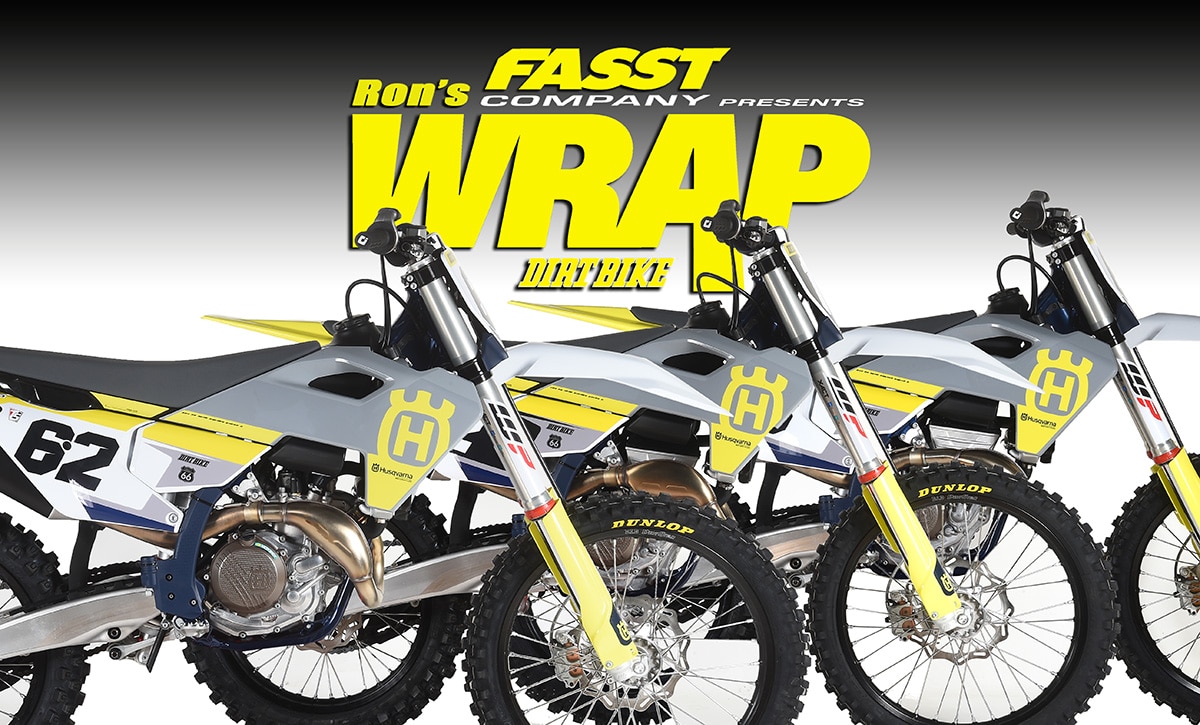 Earlier in the week, we took delivery of our 2023 Husqvarna motocross bikes at Fox Raceway. We got to take the FC250, FC350 and FC 450 away with us for extended testing, but the two-strokes were unfinished prototypes and we had only limited time on them. The Husqvarna line will only have a TC250 and a TC125 for 2023; no 300 or 150, and we don’t expect those to be available until much later in the year. Here are our first impressions of the four-strokes:

As we’ve pointed previously, the 2022 Husqvarna FC250 Rockstar Edition was a preview of this bike. So now we have the full production version, which we consider a new bike. The only part that is really familiar is the fork, which is a revised version of the WP Xact air fork that has been evolving since being introduced on the 2017 model. Just like last year, the 2023 version of that fork has less travel compared to the WP forks that come on KTM and GasGas MX bikes. The rear suspension is likewise shortened to make for a lower seat height, which has become a Husqvarna trademark. Everything else about the chassis, of course, is different this year. The strategy behind the frame change is to compartmentalize the frame flex. Husky says the rear end of the bike has different flex characteristics from the front, and that lateral flex is different from vertical flex and so on. You can’t just make a blanket statement that the frame is stiffer, although that is the bottom line in many of these areas.

As a result, the frame did gain some weight. After riding at Fox, we drained the fuel tank and put the bike on our digital scale. It was 226.5 pounds. That’s 7.5 pounds heavier than the previous year’s bike, and we believe that virtually all of this is in the frame. So Husky is no longer in contention as the lightest of the 250Fs–that title has been surrendered to Honda or GasGas, although the Husky is essentially the same as the others. It still tops the chart in price, though. The 2023 FC250 carries an MSRP of $10,099, which is the most expensive of the 2023 250 Fs announced so far.

The biggest and most pleasant difference between this bike and the previous version is the depth of its power. It’s still fast on top, just like always, but it has thicker midrange and really excels under a load and at speed. In the past, the Husky had one of those motors that always looked good on a dyno, but didn’t feel that great in real life. It always required a big handful of throttle and high revs. Now, the motor responds better to partial throttle situations and pulls better from the middle. It’s still a 250F, though, and that means you get the most out of it by holding it wide open and screaming it. The improvement in the motor will actually make the bike more appealing to novices and intermediates. Pros, in general, are much better at keeping the bike on top of its revs where it doesn’t feel that much different from the old FC250. It’s still very fast.

We still love the handling. The speed and the nature of the Fox Raceway National track is such that it rewards a stiffer chassis. That makes it more stable at speed and more secure feeling when it takes big hits. It still turns with very little effort and tracks well. At the entry to the turns, you do notice the reduced seat height. Most riders say it provides a better connection to the track. On the other hand, the bike feels kind of tall at the exit of the turn. Even though the static seat height is reasonably low compared to the other bikes in the class, the bike has less squat under acceleration. But you get used to it.
The one area where we feel the 2023 models took a step backwards was in overall comfort. The stiffer chassis transmits more impact to the rider, especially on square edged choppiness. It also places more emphasis on suspension set up. This has never been a strength for Husqvarna. We always felt like the WP air fork was a half step behind forks like the KYB on the Yamaha, even though it had clear advantages in weight and versatility. Keep in mind this is more of a comfort issue than a performance one. Fast riders can still race with stock suspension on the FC250 with every expectation of winning.

This is clearly our favorite bike of the group.We’ve always been big fans of the 350, although we have editors and test riders who didn’t want to give up their 450s. Now, it’s a different story. Of all the new stuff in the 2023 Husqvarna line, the 350 motor has the most clear and distinct improvement. It makes such good mid-range that you no longer have to scream it like a 250. You can actually torque it around the track like a 450. The revs are still there if you need them, but you don’t have to go up there if you don’t want to. You get less arm pump, less mental fatigue and less intimidation factor. It can also pull a hoeshot if it has to. Clearly, this depends on the track and the rider, but if you’re a good starter on a 450, you’ll be a good starter on a 350. The new quickshift helps a little with full-throttle up-shifts on the start chute, but most riders don’t yet trust it enough to use it afterward. We learned to turn it off on the fly.

For manufacturing ease, the 250, 350 and 450 use the same frame. Not sort of the same; exactly the same. The bodywork, subframe, swingarm and linkage are all the same. Only the rim sizes, the rear tires and the suspension set up vary. Not surprisingly, the bikes all handle very similarly. The 350 has the same strengths and weaknesses as the 250, which means it’s excellent at initiating turns, has very little squat under acceleration and has a slightly harsh, stiff feeling chassis on hardpack tracks with chop. Overall, we like the lowered seat height, although it’s still hard to make sense of the numbers. Husqvarna says that it has 5mm less travel in the fork and 7mm less travel in the rear, and somehow that results in 15mm less seat height. For the record, we think the seat height numbers are accurate. We don’t get the weird math on the suspension numbers. On our scale, the FC350 is 228.7 pounds, which is essentially the same as the 450. The price is $10,799.

As you might expect, this is the mauler of the group. The FC450 has always been fast. Now it’s faster. There are two maps presented on the new handlebar switch.The top map with the white light is sort of like the previous version; a little soft initially before an intense ramp up. Then there’s lots of over-rev for the chronic masochist. The bottom, or green map is noticeably more intense. The ramp up comes earlier and harder. On top, the bikes feel about the same. Either way, the FC450 is a whole lotta motorcycle.With that said, so are most of the other 450s on the market. The Honda is brutal and so is the previously existing Yamaha (we haven’t yet seen the 2023 YZ450F). If you want a mellow 450, you gotta look to the Kawasaki, GasGas or Suzuki. Or, how ‘bout that Husky 350?

We’re a little fascinated by the Quickshift mode. After racing with it on the Rockstar Edition and Factory Edition, we’ve learned that it’s helpful if you already have a good launch from the gate. Then you can leave the throttle open and yank and the shifter. It can make a good start into a great one. As it turns out, those situations don’t come together like that often. Most of the time, the Bozo next to you swerves into your line or you get pinched off. Still, it’s a nice feature to have when things go well.
All of the points we made about the handling of the 250 and the 350 can be Xeroxed for the 450. It’s got 450-level power, though, so everything is intensified. You notice a little more harshness in chop and you have to spend more time getting your suspension just perfect. We will say that the FC450 still feels as light as ever. It gained weight just like the other bikes, but you don’t really notice. On a 450, there are so many other things that compete for your attention. The 2023 FC450 is 229 pounds, which still makes it lighter than any of the Japanese 450s, but not as light as the GasGas MC450F (223 pounds). The retail price is $10,999. It’s interesting to note that the 250, 350 and 450 are only $900 apart in price and 3 pounds apart in weight.