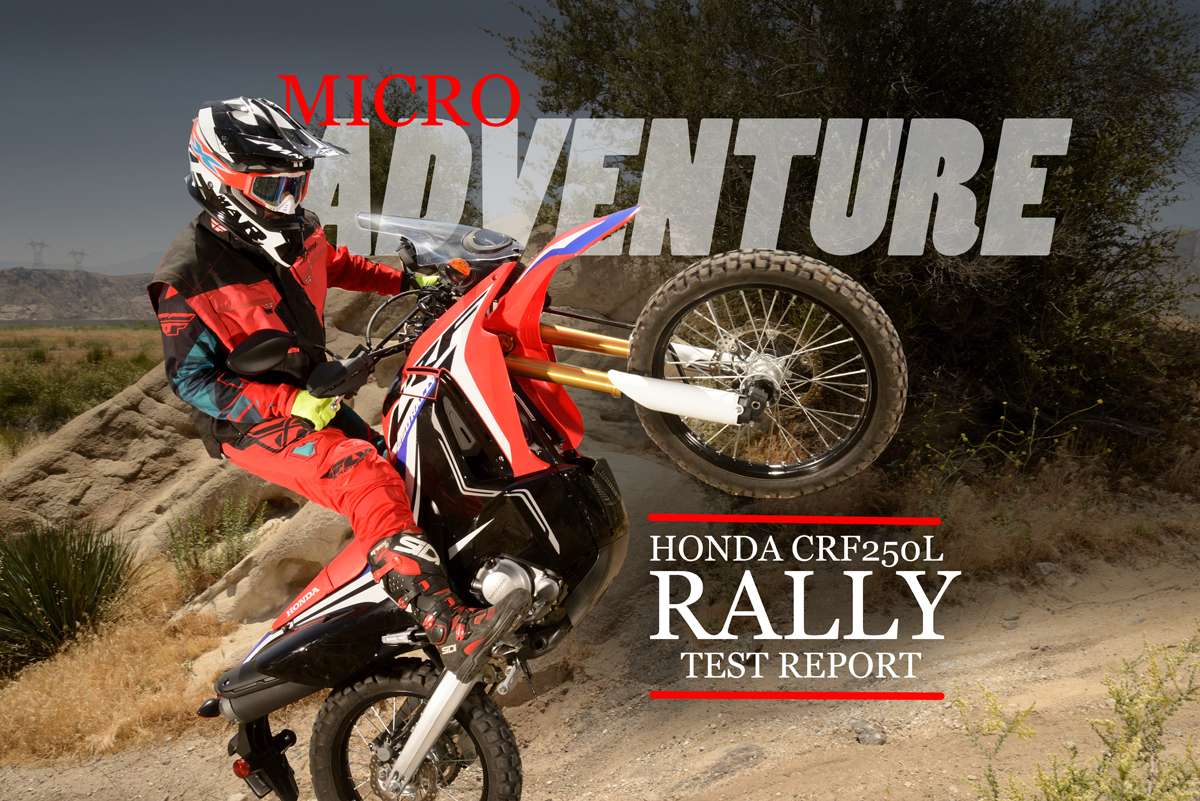 To understand the Honda CRF250L Rally, the most important thing you need to know is the price. MSRP is $5899. You could buy five of them for the price of one Ducati. The bike is like a secret entrance that allows you into the country club without the elite pedigree required at the door. The appearance of the Rally certainly won’t give you away. It looks the part of a high-dollar adventure bike, but under the bodywork, it’s a Honda CRF250L dual-sport bike. If you don’t already know, the 250L is a budget bike that Honda manufactures in Southeast Asia. The bike’s technology is tops; it’s a fuel-injected, DOHC, four-valve four-stroke with a six-speed gearbox and electric start. It’s not, however, known for its performance. It makes less than 25 horsepower and has inexpensive components everywhere. Honda took the 2016 250L and gave it a larger throttle body (38mm from 36mm), a big front brake rotor (296mm), a new exhaust and then added adventure hardware. That includes a 2.7-gallon fuel tank, a floating windscreen, an asymmetrical LED headlight, radiator shrouds that blend in with the bodywork and a radiator fan. The suspension is longer on the Rally, coming out to 11 inches in front and 10.3 inches in the rear. That brings the seat height up almost an inch over the standard L model. The suspension has no clickers or preload adjusters; what they give you is what they give you. Honda says that the curb weight is 346 pounds. You can have anti-lock brakes if you want, but that will cost you an extra $300.

EXPECTATIONS
Before you ride the Rally, you tend to have certain conflicting expectations. On one hand, you should know that a 250cc four-stroke that sells for so little isn’t going to be powerful, lightweight or especially well suspended. It’s only logical; you can spend more than that on suspension mods for your motocross bike. Yet, the bike looks so good, it seems to promise more. Honda absolutely nailed it with the styling on the Rally. There’s nothing to give it away; it looks every bit as legitimate as an Africa Twin. If you let the bike’s appearance guide your expectations, though, you’ll be disappointed. It is what it is—a 250cc four-stroke street bike.
The Rally isn’t fast, no matter what your yardstick is. It revs reasonably high, though, so you can make it do all the required tasks. It can accelerate reasonably well on flat, hard ground. It can keep up with freeway traffic, and it can positively smoke a Honda Civic from a dead stop at a traffic light. To expect much more would be silly. It was never a particularly fast motorcycle to start with, and Honda added around 25 pounds in adventure gear.
As far as the suspension components go, the Rally runs into the same issue. This was never meant to be premium hardware. It’s reasonably comfortable on the road and on smooth trails, but too soft, squishy and under-damped for anything aggressive.
Now that we’ve dashed your performance hopes and dreams, we can look at where the bike exceeds expectations. This is an extremely pleasant, well-made motorcycle. There’s no vibration; it’s quiet, smooth and comfortable. The layout is roomy for a medium-sized man. Women and teenagers might struggle with the seat height, but it’s no taller than a full-sized off-road bike. The clutch is smooth and the gearbox is easy to shift, as long as your feet aren’t too big. In overall quality, the bike far exceeds anything in its price range. Even though this doesn’t come out of mainland Japan, Honda clearly demands that its satellite factories adhere to the same standards of quality control. There are no sloppy welds, bad castings or anything to suggest third-world quality.

RALLY TURF
At various times we rode the Honda CRF250L Rally in mixed company. Probably the best aspect of the bike is that it’s never out of place. In a group of small-bore dual-sport bikes, it can go all the same places and do all the same things without struggling—it just takes a little longer. In that crowd, it’s held back by suspension and tires more than engine performance, but at the end of the day, it’s not that big of an issue. The stripped dual-sport bikes were at a much bigger comfort disadvantage on the road segments. On another occasion, we rode with full-sized adventure bikes. The dynamic of that group was more complicated. A typical adventure ride tends to have what you might call “speed spikes,” where everyone seems to receive the same unspoken message to suddenly go very, very fast, then, just as suddenly, slow down to sightseeing speed. The Rally doesn’t respond to those messages. It just plugs along at more or less the same speed all day, but, once again, it arrives at the same place.
A group dynamic that would welcome a bike like the Rally is when a passenger is promoted to a pilot. If you have a friend or spouse who usually rides on the back, the little Honda is a perfect transition bike. It can keep up with the big boys, and, in the event of a tip-over, it’s not likely to sustain that much damage. And finally, there’s riding with other Rallies. That’s the best group of all for a CRF250L Rally, where everyone is on equal footing.
We predict that the Rally gang ride will be a “thing,” and it will happen sooner than you think. We wouldn’t be surprised if the Ducati guys make room in the garage for a Rally (or two) just for those occasions. The Honda CRF250L Rally has one special quality that the high-dollar adventure bikes lack—it excludes no one.