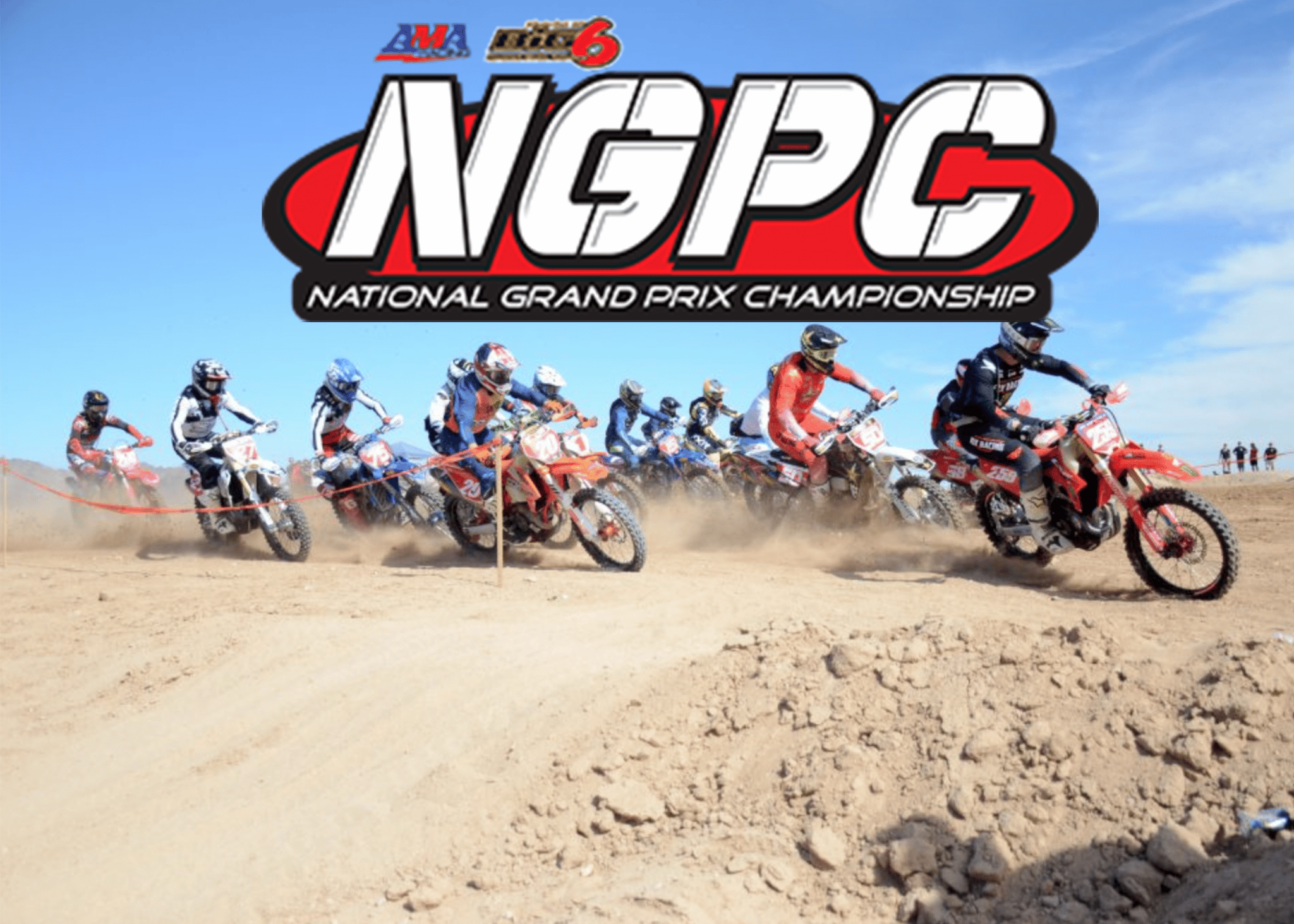 The National Grand Prix Series found itself at Shorty’s Sports Park, located in Blythe, California, for round nine of ten of its championship series. The Prospectors Motorcycle Club laid out a 6+ mile sand track loop that utilized the facility’s motocross track, local sand washes, sand hills, and a special pro section that offered quality entertainment for spectators.  The track is not what these racers are accustomed to racing, making the challenge for the win much more gratifying. The weekend’s highlight was that both Oliveira brothers could clinch their National Championship runs, making for a one-of-a-kind moment in the sport, with brothers winning both Pro Classes.

The Pro Class was exciting to watch; A shocker to the day was that SLR/Honda rider Cole Martinez was out with an injury and did not compete in the weekend’s racing. With Martinez second in the points standings and out on racing the weekend’s event, it opened up the opportunity for Oliveira to finish his championship bid and clinch his third National Championship in a row. Off the start, Austin Serpa, aboard his CCM KTM, nailed the holeshot with 16 pro racers in tow.

Justin Hoeft, aboard his Kilmartin/3 Bros Husqvarna, inherited the early lead, with Talon Lafountaine, Austin Walton, and Dante Oliveira having a battle of their own for second, third, and fourth. The pair of Oliveira and Walton made their way around the Husqvarna-supported rider and continued to swap back and forth for the lead matching each other’s laps. While the battle at the front was exciting, the battle for the final podium spot was starting to heat up. SLR Honda racer Talon Lafountaine had fallen back to fourth and was just off the pace of the lead pack.

His consistency paid off later in the race when Hoeft started falling back from his early stint at the front. Lafountaine made his move with three laps and made his way into third. At the front of the pack, Walton made a slight mistake that allowed Oliveira to stretch his gap to over 20-seconds.

When the checkered flag dropped, the Red Bull/KTM racer secured his third National Championship in a row and the race win on the day. Walton saw himself grab another solid second-place finish to Oliveira while Talon Lafountaine held on for a third-place finish in the premier class. The early leader Hoeft held on for fourth, and Dalton Shirey rounded out the top five.

Like his brother in the Pro Class, RPM/KTM rider Mateo Oliveira was in a championship clinch position for himself in the Pro 250 class coming into the weekend. Oliveira has been nothing short of perfect this season, going almost undefeated in every event he has lined up in. As the second wave took off, Oliveira found himself in the lead and began to open his laps up at the front. Following the RPM/KTM racer was SLR/Honda’s Jack Simpson; Simpson seems to be the only other racer to pressure the KTM rider. Though he has missed a few series races due to visa issues, Simpson kept Oliveira honest throughout the year. And just as we’ve seen, the two racers broke away from the pack.

In the early laps, Simpson seemed to get close to Oliveira but could not quite match the pace. As the race moved to the top, the final podium position had its battle. New SLR/Honda recruit Parker Ross and Gainslinger Kawasaki’s Cole Zeller began matching each other’s pace and were in a battle of their own. As the checkered flag came out, Mateo Olivera clinched his first National Pro 250 Championship and took top honors on the days of racing. Simpson, again, settled for another second-place finish to the RPM/KTM racer but nailed another podium spot for SLR/Honda. Parker Ross rounded out the podium making for two SLR/Hondas on the podium and his first Pro 250 podium of the series. Completing the top five were Cole Zeller and Kilmartin KTM rider Colton Aeck.

Brandy Richards yet again proved that she is the fastest woman on the West Coast. As the green-flagged dropped it was JCR/Hondas Tara Gieger grabbing the hole shot and leading the women out on the opening lap. Richards found her way around and ended up leading from start to finish. She was the only one to complete nine laps and ended 22nd overall. Tara put her JCR/Honda in the second spot followed by RPM/KTM rider Kaitlyn Jacobs.

The tenth round of the series will trek just north of Blythe where the series will find itself closing on the year. Havasu provides yet another Sand type of track known for its grueling rocks, sand whoops, and tight course layout.

FOR MORE ON RACE RESULTS AND POINT STANDINGS, CLICK HERE

LIVING WITH THE HUSQVARNA TE150i