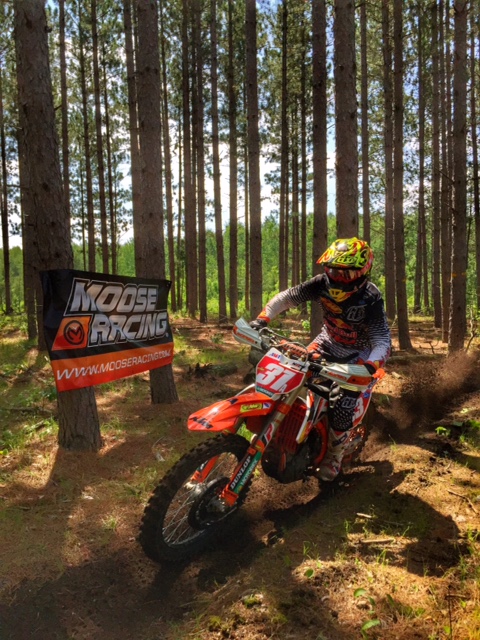 Huntersville, MN (June 19, 2016) – Russell Bobbitt turned in a fast and consistent performance to claim his second win of the season after dominating round five of the Kenda AMA National Enduro Series in Huntersville, Minnesota. The FMF/KTM rider was no worse than second in each of the six tests, finishing the event with three test wins and three seconds to beat out SRT KTM’s Steward Baylor by one-minute-and-twenty-two seconds at the finish.

Bobbitt had one little crash in the fifth test, but other than that the Georgia rider had a clean day.

“I just hooked a little tree and knifed it over, but I got going pretty quick so I didn’t lose a lot of time,” Bobbitt said of his tip-over in test five. “This place is a lot like what I ride at my house, so I felt comfortable today.”

Steward Baylor was fourth fastest in the opening test of the day but picked up the pace during the middle part of the race, winning the fourth test to move into second place. The 2012 National Enduro champ suffered a mechanical hiccup in the final two tests, but still managed to hold onto the runner-up slot.

“It was kind of a rollercoaster ride for me today,” said Baylor. “I was second and third most of the day, but we started having an issue with the bike at the start of the fifth test and that dogged us the rest of the event. Russell had us covered, though, so I don’t think it made a difference.”

Third went to Jesse Groemm, who was making just his second ride on a KTM sponsored by Solid Performance Racing. The New Jersey rider kicked off the event with a win in test one and then settled into a battle with Grant Baylor for the final step of the podium. Despite a tip-over in test six, Groemm held on to edge the younger Baylor brother by 11 seconds for third.

“Grant and I were about five seconds apart going into that final test and I actually went down at one point, but I just tried to stay calm and push and I was able to hold him off at the finish,” said Groemm. “This was a pretty tough event with the heat and the way the sand kind of whooped up. It was one of the toughest Enduros we’ve had this year.”

Grant Baylor held on for fourth, and the N-FAB/Am Pro Yamaha rider was not happy at losing out on a podium in the final test.

“Things started out good, but it started going downhill pretty fast,” said Grant. “I won the second test and I actually crashed in that test, but the fourth test is where things started to go wrong. Not sure what happened, but I was crashing left and right and just couldn’t get it together.”

Drew Higgins claimed his best-ever national finish with a fifth. The Maxxis/RPM Racing KTM rider is an up-and-coming rookie who is slowly working his way into top five status.

“I enjoyed the trail and I think that made the difference,” said Ferderer. “I had two tip-overs but other than that I was comfortable out there.”

Colorado’s Ian Blythe put his KTM into seventh after battling back and forth with Rockstar Energy Husqvarna Factory Racing’s Josh Strang and AirGroup Racing’s Nick Fahringer for most of the day. Blythe beat out Strang and Fahringer by 22 seconds at the end of the day, while the Husky duo finished the event tied on total time. Strang wound up with eighth, while Fahringer settled for ninth. Meanwhile, 10 seconds back was Minnesota rider Tim Nienow, who rounded out the top 10 on a Honda.

The Kenda AMA National Enduro Series now heads to Pennsylvania for the Rattlesnake National Enduro, round six of the series in Cross Fork, PA on July 24th. For more information on the series check out www.nationalenduro.com.