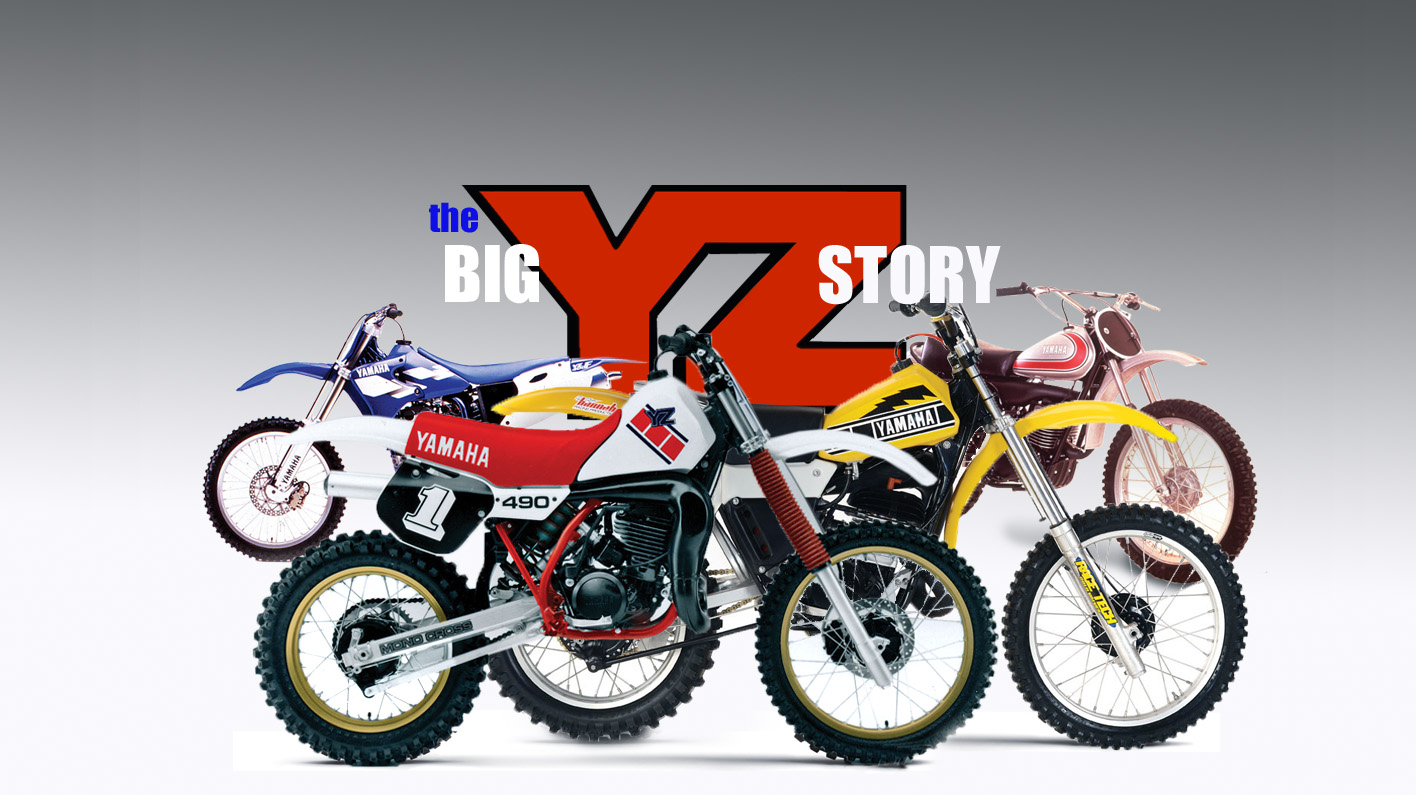 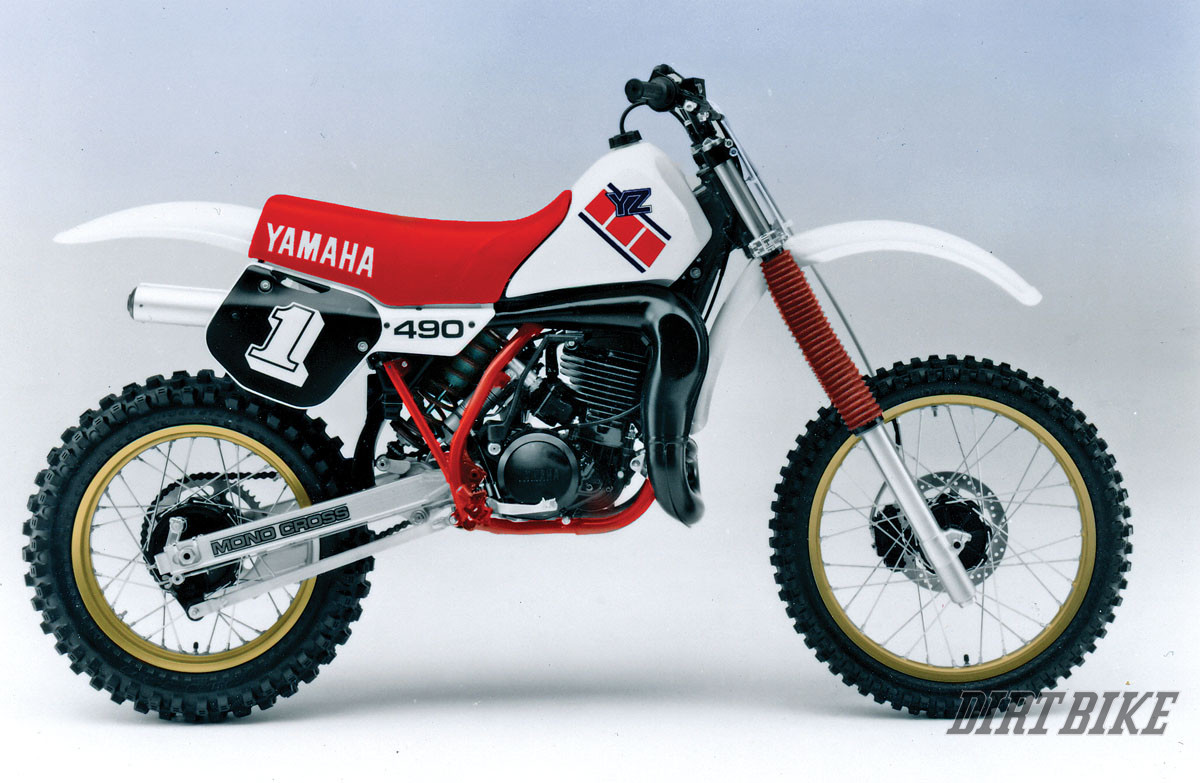 Yamaha loves big bikes. Clearly, there’s a connection between the people at Yamaha and the idea of large displacement motocross bikes, going all the way back to the days when 360cc was considered large and a 500 was outrageous. Through most of the ’70s, Yamaha was the only Japanese maker to even offer an Open-class MX bike. But the connection goes even farther back. You have to go all the way back to the first production motocross bikes from Japan. For Yamaha, that goes back to 1969. The 250cc DT1MX and the 360cc RT1MX were official models that year. They were based on the enduro bikes, but came stripped down for racing and had Yamaha’s GYT kit installed at the factory level. Those first bikes were the raw materials used for racing efforts in Europe and in the United States. Overseas, Torsten Hallman was the focus of a development program that used the World Championship GPs as a test bed. Over here, Gary and DeWayne Jones were the riders, and their father Don Jones was the engineer. Both camps sent their reinvented race bikes to Japan, and what came back in 1973 were all-new, works-level bikes that were sold to the public. That was the start of the YZ line.

THE RECORD BOOK
Yamaha was in the mix from the very start of motocross in America, winning three championships in the first three years. But, the record book doesn’t reflect the drama and controversy involved at the time. The first U.S. 500cc motocross championship was awarded to Husqvarna rider Mark Blackwell in 1971 based on points from the Trans-Am series. Belgian CZ rider Sylvain Geboers actually won the series, and they had to go all the way back to 14th to pick up the first American. Gary Jones took a prototype YZ to third in the 500 standings and won the 250 title. In 1972, a dedicated series for the U.S. championship was created, with eight races starting in Georgia and ending in Alabama. Jones won the 250 title and was second in the 500s to Brad Lackey. The record book gives Lackey’s title to Kawasaki, although he only won the final race on that brand. His other three wins came on CZs. The next year, Jones departed from Team Yamaha and was replaced by Pierre Karsmakers, who promptly won Yamaha’s first 500 National Championship. It raised eyebrows at the time; Karsmakers was Dutch, and given the recent history of using U.S. citizenship as a criteria, there were mutterings that his new crown wasn’t legit. It stood, though, making Yamaha the most successful brand in the infancy of U.S. motocross.

Karsmakers was injured in 1974, preventing him and Yamaha from defending the 500 title. Jimmy Weinert won on a Kawasaki that year, and Yamaha promptly hired him for the 1975 series, which he won on an exotic OW26 works bike. Unknown rookie Bob Hannah then won every single race in the 1976 Florida series on a similar works bike. Yamaha and Rick Burgett would win the 500 crown again in 1978. During this period, national-level motocross bikes were made in Japan sparing no cost. The bikes that the pros raced were completely different from production bikes. But, a production-based Yamaha YZ465 would win the 1981 USGP at Carlsbad in the hands of Marty Moates, stunning everyone. In U.S. Nationals, works bikes continued to become more and more expensive, but that would soon change. Broc Glover’s 500cc championships in ’81, ’83 and ’85 were on works bikes, but his 1985 championship came aboard a bike that was based on the production YZ490 of the day. The bike wasn’t easy to ride, but it was fast; Glover was the only rider who even wanted to ride it at the National level. This was mirrored in sales. There was a rank-and-file migration away from big two-strokes, which were simply too big and powerful for the average rider. The Yamaha YZ490 was discontinued in 1991, and the 500cc championship itself was abandoned by the AMA in 1993.
But, that wasn’t the end of the big Yamaha saga in pro racing. In 1998, the YZ400F changed everything. It was originally seen as a replacement for the YZ490 in the Yamaha line, but AMA rules of the day allowed 560cc four-strokes to compete against 250cc two-strokes. Doug Henry famously became the first man to win a Supercross on a four-stroke in 1997 when he raced the Las Vegas Supercross on a prototype YZM. What followed was the rebirth of the 500 class, but it didn’t happen right away, and they didn’t call it the 500 class any more. In fact, between 1998 and 2004, we didn’t know what to call the premier class in motocross. In short order, the four-stroke displacement limit was reduced to 450cc. For about six years, 250cc two-strokes and 450cc four-strokes raced against each other, confusing the record keepers and fans. By 2004, the battle of the engine types was won by the 450cc four-stroke.
THE YEARS

1973: The first YZs arrived in Europe and Canada. They had lightweight alloy fuel tanks that were secured with straps. Gary Jones confesses that the prototype used saddle straps improvised from supplies obtained from a horse tack shop. The Japanese engineers liked them so much that they incorporated the straps on the production model. In the U.S., Yamaha sold an oddball model called the SC500 that was unrelated to anything sold previously or subsequently. The SC was powerful but difficult to ride. The U.S. also had an MX360 based on the RT1 enduro bike that year.
1974: America got the full YZ line, including a 360, a 250 and a 125. Yamaha also continued to offer a more affordable MX line. These were new bikes, too, but shared almost no parts with the YZs. The U.S. price for the YZ360A was around $1700. There were only 500 made, and to this day, the ’74 YZ360A is one of the most desirable vintage dirt bikes to have.
1975: Long-travel suspension took the motocross world by storm in 1975. In Yamaha’s case, that meant the arrival of the Monoshock. Yamaha continued to offer two different lines: the big YZ remained 360cc in displacement, while the new MX400 was 397cc. The MX was heavier and cheaper, but in a weird twist, most riders preferred it over the pipey YZ360.

1976: Yamaha discontinued the MX line in 1976—sort of. The new YZ400 was actually based on the 1975 MX400. The 1976 version got some more expensive parts, including large reservoirs at the top of each fork leg. Between 1976 and 1978, the YZ400 improved each year. It got a plastic fuel tank in 1977 and an aluminum swingarm in ’78. The 1978 YZ400E is considered one of the best Open-class MX bikes of the entire decade. The TT500 also arrived in 1976. It became an iconic motorcycle in its own right and was the first dirt-only four-stroke Yamaha offered.
1979: This was a year of reverse progress in Japanese motocross. The YZ400 was redesigned with a short-stroke motor that wasn’t as effective as the one it replaced. This allowed European makers—mostly Maico—to get back in the game. Honda and Kawasaki had nothing in the Open class, while Yamaha and Suzuki had nothing for the coming of the Maico 490. On the off-road side, Yamaha expanded the IT line to include an IT400.
1980–’81: Yamaha quickly acted to correct the problem and presented the YZ465. It was a great bike in every way. If Yamaha had stuck with that engine, it might have saved the Open class for years to come. But, there was a horsepower race brewing. The IT400 grew into an IT425 for one year, then became an IT465. It would be dropped in ’85.

1982: The Yamaha YZ490J was introduced. In addition to the added displacement, it got a major revision to the Monoshock design, now incorporating linkage between the shock and swingarm. The 490 was heavy, fast and very demanding of its rider. Unfortunately, the Open class in motocross was already fading, and Yamaha didn’t see much reason to invest more development into the big two-stroke.
1983–1990: The YZ490 was powerful and fierce in this period, but development slowed to a standstill. The ’83 model got a new suspension design, and in ’85 a front disc brake and a Euro-type white color scheme arrived, but little real improvement came after that. In the meantime, the Honda CR500R and the Kawasaki KX500 received liquid cooling but also slowed in both sales and development. The YZ490 was pretty much obsolete when it was quietly dropped in ’91.
1992: The 490 was reborn as the WR500 for a two-year run as an off-road bike. The WR got a larger fuel tank and a number of off-road amenities. It wasn’t received well by racers, but it did well with the sand-dune set.

1998: The YZ400F ushered in the age of the four-stroke. At the time, it wasn’t as good as the two-stroke, but it was close. The YZ426 that came in 2000 was only slightly better but still hard to start and rather heavy.
2003: By now it was clear the four-strokes were going to take over. It was just a matter of time. The YZ450F arrived as a response to the 2002 Honda CRF450R, and the horsepower war was on again.
USED BIKES
The YZ400/490 family of motorcycles is vast, and large numbers of them are still in service. The older models are extremely popular in vintage racing circles and still somewhat affordable. If a ’70s-era YZ400 runs and is complete, it’s worth around $2000. As for the 490s, most have been ridden into the ground. The good news is that the 490 is hard to break and cheap to repair, so there isn’t any dirt bike that is as inexpensive to operate. You can buy a running YZ490 for around $1000 and have a motorcycle that is fast enough to keep up with anything on wheels. The four-stroke line is another story. As it turned out, the YZ400F was more reliable than many of the 450s that followed. That’s not necessarily good for the used-bike buyer. It means that large numbers of them have never been rebuilt, and 17 years is a long time to go on the original motor. The ’98 YZ400F deserves respect for its place in history, but it’s not an especially good used-bike buy, even though many are available at low prices. For more information on early Yamahas, there are a number of good sources, including www.mxworksbike.com, www.earlyyearsofmx.com and, as always, eBay and Craigslist.