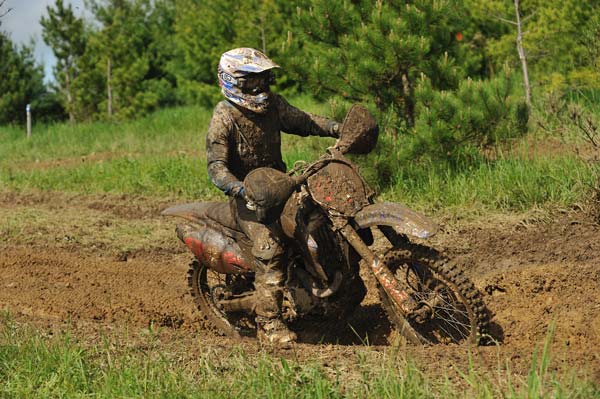 Hot Rod Charlie Mullins came out on top of a four-rider battle to claim an exciting and hard-fought win in the Can-Am Grand National Cross Country Series, at the Moose Racing Mountain Ridge GNCC in Somerset, Pennsylvania.

After moving up from a poor start, the Obermeyer/Am Pro/FMF Yamaha rider battled Am Pro/FMF Yamaha’s Barry Hawk Jr., and FMF/KTM teammates Cory Buttrick and Nate Kanney, before taking the lead for good with two laps to go. All four riders held the lead at one point or another over the course of the three-hour race – which was considered to be one of the tougher events of the year after weekend rain showers made Somerset’s infamous rocks and hillsides more treacherous than ever.

The victory was the third-straight for Mullins, and tightens up the championship points chase by moving him to within three points of leader Josh Strang, who finished seventh in Pennsylvania, after admittedly having an off day.
Mullins is obviously on a roll and credits his recent run of success to “the elimination silly of mistakes.”
“I’ve been getting a little smarter in my racing and it’s paying off,” said Mullins. “I’m winning, and it’s great, but there will be a time when I won’t win, so I’m just going to keep working hard and take it a race at a time.”
Mullins may have given some insight into his “smarter racing” tactics with his next quote.
“I actually didn’t want to lead right away,” revealed Mullins. “I was happy to follow someone and see the lines.”
“After a while, I was able to make some good passes, and I hooked up with Buttrick, Kanney and Barry for a couple of laps,” he added. “I felt like we had a good pace going. Then I got into the lead with a couple of laps to go and I put my head down and charged pretty hard.”
Mullins stretched a small lead at the two-lap board, to a 60 second advantage at the finish.

Buttrick matched his best-ever performance in the XC1 class by making a last lap pass on Hawk to claim the runner-up position. The Logan, Ohio resident got a great start and led most of the opening lap, before being passed by Kanney just before the barrels.

For the next two laps, Buttrick swapped leads with Hawk and Kanney, the trio running a scorching pace over slippery rocks and through deep and rutted mud holes.
On lap four, however, Mullins moved into the mix.
“With about two laps to go, Charlie passed me, Barry and Kanney, all in the same mud hole,” said Buttrick. “He had a way better line than we did – he went left and we went right, and he came out with the lead.”

Hawk ended the day in third, his first podium since last year’s Somerset race, and he was obviously the favorite of the fans.

“I felt good today, and the fans were great – it seemed every lap, someone was cheering me on and point the way through mud holes,” said Hawk. “Thank you to all the fans out there, cheering me on.”

“This is the most fun I’ve had racing in a long time,” added Hawk. “There were a few sections that were really gnarly – you couldn’t see the bottom and you didn’t know what was in there. There would be three or four of us together and we’d go into one of those sections, and whoever was leading would go to fourth and whoever was in fourth would go into the lead.”

Am Pro/FMF Yamaha’s Paul Whibley finished two minutes behind Hawk for fourth, and maintains third overall in the series standings. Meanwhile, Kanney settled for fifth after breaking off his front brake assembly.

Factory Husqvarna rider Glenn Kearney also suffered problems, knocking off his rear brake rotor after running as high as second on the opening lap. Strang finished seventh, ahead of a trio of Kawasaki riders: Kenneth Gilbert, Jedediah Haines and Eric Bailey.
Haines was the recipient of the $250 Motorcycle-USA.com Holeshot Award, after edging Buttrick to the line after the start.

As for Strang, the Somerset race made two disappointing races in a row.
“The track looked good and I was looking forward to riding it,” said the FMF/Makita Suzuki rider. “I got a good start, and I rode pretty good for a lap and a half, but I went down at the start of the second lap and things just started going downhill from there. I probably crashed every lap after that.”

Thomas and Russell battled back and forth during the early going; however, Thomas finally broke away, and ultimately finished with a two-minute advantage over Russell.
“I got a good start and led going into the woods,” said Thomas. “Kailub got around me towards the end of the lap, but I managed to get him back going into the rock section, and just rode a smart race after that. I knew it was going to be difficult towards the end, and I got stuck a couple of times just thinking a bit too much – I changed my line when I shouldn’t have. But I had a big lead and just rode into the finish.”

Despite finishing second, Russell still maintains a 27-point lead in the XC2 standings.
“The championship is what’s most important, and I’m solid in the points standings right now,” said Russell. “It was a tough day; Jason was riding pretty good. I would go down, catch back up and then go down again. I just could never get around him.”

FIM Veterans World Cup Round On May 30th