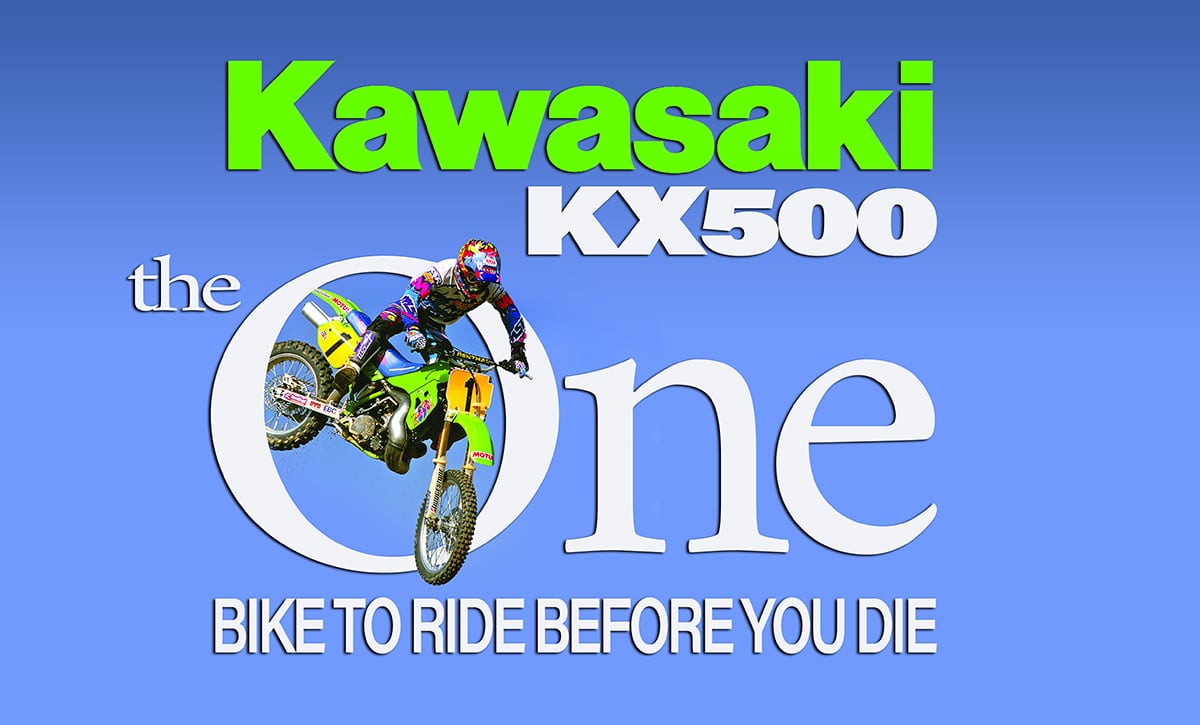 “A  fuse looking for a light.”

Those are all quotes from the June 1983 issue of Dirt Bike. The subject? Kawasaki’s first KX500, a bike that was destined to become a legend in motocross and desert racing. It was a humble beginning for one of the greatest dirt bikes in history. At the time, there were no 500cc motocrossers. Kawasaki was the first to go there since the notorious 501 Maico of the previous decade. But in the end, the KX would outlast all others of its kind, officially turning out the lights on the 500 two-stroke class in 2004.

For over 20 years, it was generally accepted that if any bike made more power than a Kawasaki KX500, it was impractical. The KX was seen as the upper boundary of sanity. It might have been true. Today’s 450 four-strokes make about the same peak power as the first KX500 of 30 years ago. But what made the 500 so formidable was the narrower spread and fearsome delivery. It was a bike for real men. Unfortunately, it seemed that real men were in short supply, and the market gradually moved away from the KX500 and the other 500s that followed. When it finally was dropped from the Kawasaki line, it had been unchanged for more than 10 years, and its sales numbers were unimpressive. The question of cause and effect remains unanswered to this day. If the KX had moved with the times, would its era have lasted longer?

Interestingly enough, the KX500 remains competitive even now in one very specialized realm. It was, perhaps, the greatest desert racer of all time. Motocross might have been its intended mission, but its particular blend of strengths meshed perfectly with the needs of western off-road racers. The KX was all but unbeatable in the National Hare & Hound series as well as in Baja. Many top desert racers say they would still ride it to this day, if only they could. 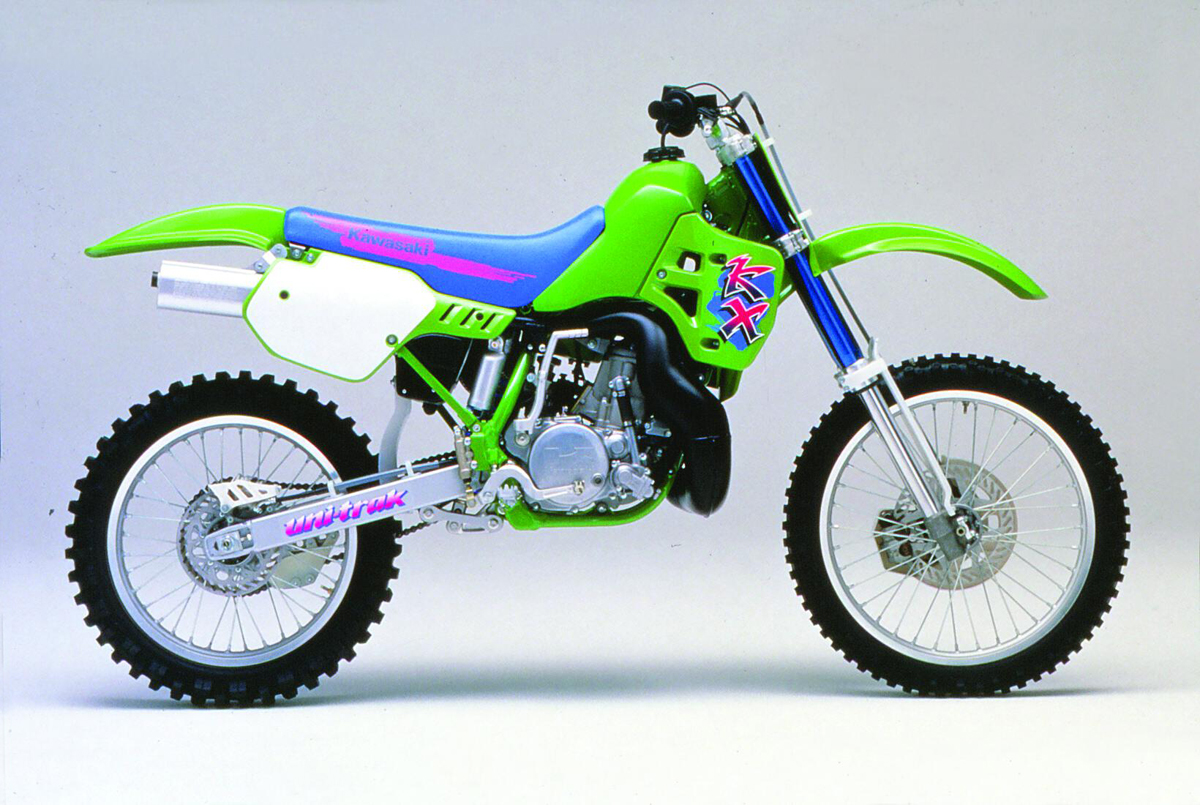 In the early years of motocross, the 500 class was the “Big One,” both in Europe and in the U.S. The year 1972 saw the first dedicated 500 MX championship series in the U.S., and it was Brad Lackey who won on an Kawasaki SR450 works bike. Jimmy Weinert followed up with

Kawasaki’s second National Championship two years later, then a number of riders took turns representing Kawasaki. John DeSoto, Steve Stackable, Gary Semics and Gaylon Moiser all campaigned works Kawasaki big bikes. But, the first Kawasaki rider to actually ride something called a KX500 was Goat Breker in the 1984 500 Nationals. The AMA had instituted the “production rule” in a cloud of controversy, and Breker had to turn in his exotic one-off works SR500 for a production-based KX. He did well, but won no overall victories that year. In ’89 and ’90, Jeff Ward gave the KX its first National Championships on consecutive KX500s, then, in 1992, it was Mike Kiedrowski. The final year for the 500 National Championship was 1993, when Mike LaRocco’s victory made the final entry in the MX record book for both Kawasaki and the class itself. Altogether, Kawasaki won forty 500 Nationals with the KX500 and its predecessors. Oddly enough, Kawasaki never won a 500 World Championship in Europe. But, Ron Leichien’s 1988 domination of the Motocross des Nations on a Kawasaki 500 was legendary.

However, that was only half of the KX story. In 1986, Donnie Griewe won two National Hare & Hounds on a KX500. A few years later, the flood gates opened. Danny Hamel won every single desert National from 1992 until 1995—every one. He was killed in a Baja accident in late ’85, but the Kawasaki’s desert championship run continued with Greg Zitterkopf (1996), Ty Davis (’97 and ’98), Brian Brown (’99) and Destry Abbott (’00 and ’01). In the meantime, Kawasaki utterly dominated the Baja 1000 under the leadership of Team Green Czar Mark Johnson. He hired Larry Roeseler in 1987, and the two of them put together a program that proved unbeatable from 1988 to 1996. The riders who took their turns winning the Baja Mill for Kawasaki was a very impressive list: Roeseler himself, Ted Hunnicut, Ty Davis, Danny Hamel, Danny LaPorte, Paul Krause, Greg Ziterkopf, Paul Ostbo, and even Marty Smith.

Among Japan’s giants, Kawasaki came late to the motocross party. Suzuki built the first production open-class two-stroke in 1971, but by 1973, it was clear that all motorcycle manufacturers saw the dirt as a way to bring young customers into the building. Kawasaki had great success with its early 125, but the big bikes were mediocre or downright poor motorcycles well into the mid-’80s.

1973: Kawasaki’s first open-classer was a very limited production bike called the S12. In 1973, it was offered to a few dealers for their supported riders, while Brad Lackey and Jimmy Weinert rode works versions. In 1974, it was renamed the KX450. It had a plastic gas tank (very forward-thinking at the time) and horizontal reservoirs on the shocks (dubbed “Hammerhead” shocks). It wasn’t a very good motorcycle compared to the new Yamaha YZ360, but it was a start.

1975: Kawasaki detuned the 450 and downsized it to a 400. The plastic gas tank was gone, and there were a number of cost-cutting features. Again, Kawasaki lagged behind Yamaha in the open class. By then, the YZ360 had a Monoshock rear end, and it was the most sought-after bike in the class. Kawasaki kept the 400 in the line during 1976, but quietly worked on something big for the future.

1980: Kawasaki unleashed the next big thing in motocross. The Uni-Trak rear suspension system was unveiled on a KX125, KX250 and an all-new KX420. It was the first vertically mounted single rear shock and it used linkage—clearly the forerunner to virtually all of today’s rear-suspension designs. In practice, it didn’t live up to its potential. The lever ratio was actually regressive, getting softer as the swingarm moved through its arc. Kawasaki engineers refined the system for the next few years, making it better and better. The 420 motor, though, wasn’t a stellar performer. It was outpowered by most of its classmates, most notably the stunning Maico 490.

1983: The KX500 is born. Kawasaki might have had the biggest bike in the class, but that didn’t translate to performance. It was fast, but had a poorly designed combustion chamber that resulted in self-destructive tendencies. The compression had to be lowered, and that killed any performance edge it might have had. The good news was that Kawasaki had redesigned the chassis and, for the first time, had excellent suspension.

1985: This is the first of the great KX500s. It got a new motor with liquid-cooling and it was, for the first time in Kawasaki’s history, the best bike in its class. The Honda CR500R of the time was faster, but had terrible power delivery and wicked handling. The next year, Kawasaki gave the KX a feature that no other 500cc two-stroke had ever seen: a KIPS power valve.

1987: Updates came yearly in this period, as Kawasaki and Honda were locked in a battle for dominance of the class. All the others had fallen by then; Suzuki’s 500 was long gone, and Yamaha’s air-cooled YZ490 was still in the line, but rapidly becoming an antique. The Kawasaki got a new frame and the side-access airbox design was abandoned. The rear suspension was reconfigured, losing the big rocker arm on top.

1988: The KX500 got its last big redesign, becoming the bike we know and love. It got minor mechanical changes and cosmetic updates afterward, but the most significant event was the arrival of the upside-down fork in 1990. In 1992, the ignition and crank were changed as an unofficial acknowledgment that the KX was being used more for off-road riding than motocross. By the early ’90s, Honda had given up the horsepower chase, leaving the KX uncontested as the most powerful dirt bike made. There was a brief challenge from KTM in the 500 class, but the only years that proved formidable were 1991 and 1992. There was also a KTM 550DXC in that period that was a very good bike.

Kawasaki KX500s are plentiful on the used-bike market, particularly in the Southwest. Bring your checkbook, though. In recent years the price for a good KX has skyrocketed. One of the great things about used KX500s is that they are fairly indestructible. They could swallow dirt by the pound and keep running. The electrofusion-coated cylinder couldn’t be bored, but would wear for a long, long time. If it does get damaged, there are a number of companies like Millennium Technologies that can recoat a KX barrel. OE parts are getting very rare.

At the height of the Team Green desert racing era, the most significant modification was frame reinforcement. The KX frame wasn’t nearly as indestructible as the engine. The pipe mount and footpeg mounts always got attention. Zip-Ty Racing still has a long list of KX500 parts and services available.

The fleet of motorcycles is so large that it’s somewhat eternal on trails in California and Arizona. And, there’s always talk of a renewed race effort in Baja and District 37. Why not? It’s never really been established that there’s anything better.