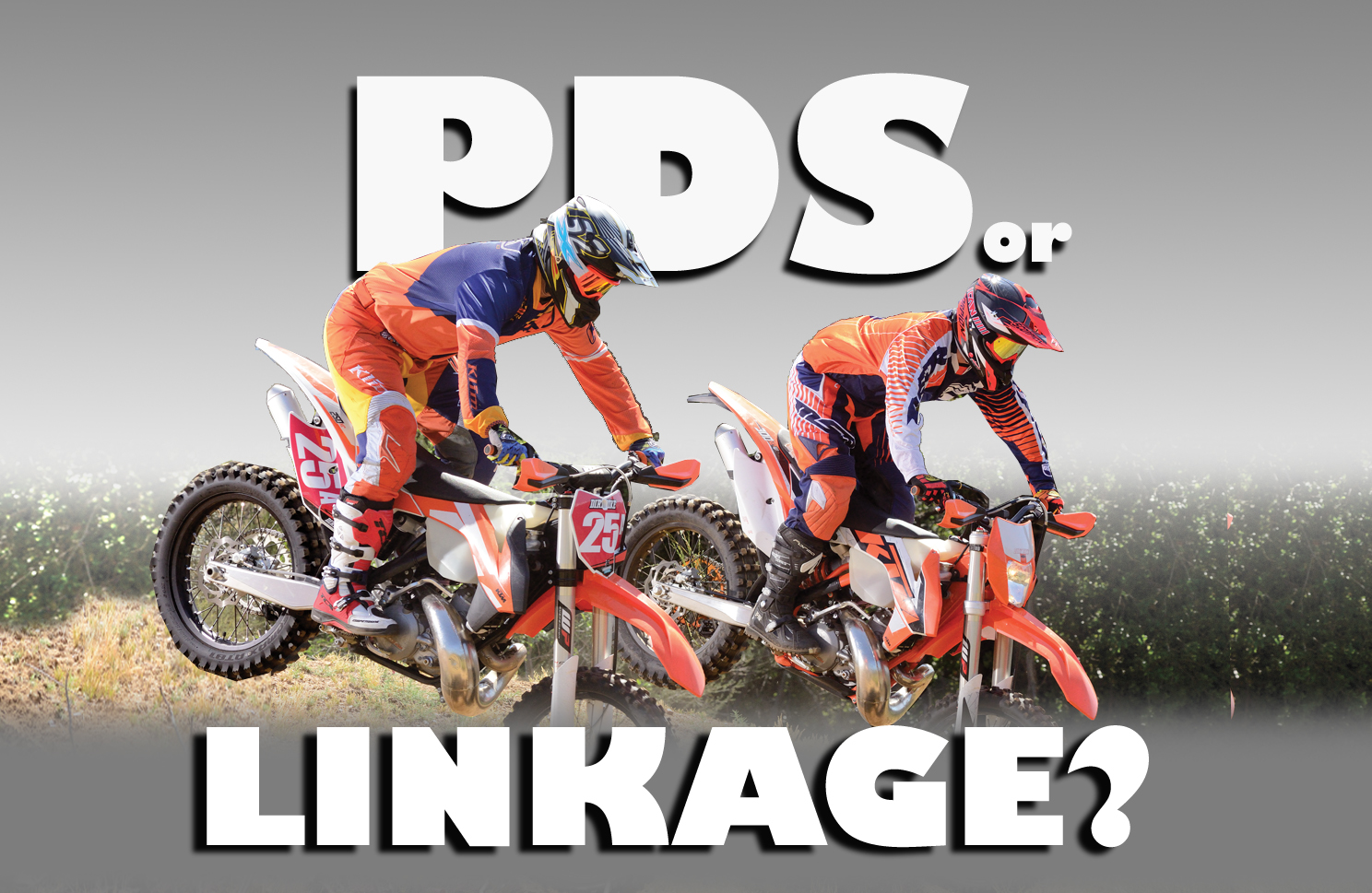 It is the most commonly asked question among KTM buyers: which is best—linkage or PDS? The subject confuses some and generates extreme opinion in others. KTM doesn’t make it any easier, either. The 250, 350 and 450 four-strokes, as well as the 250 and 300 two-strokes, are available in either configuration, leaving buyers at the mercy of salesmen for advice. 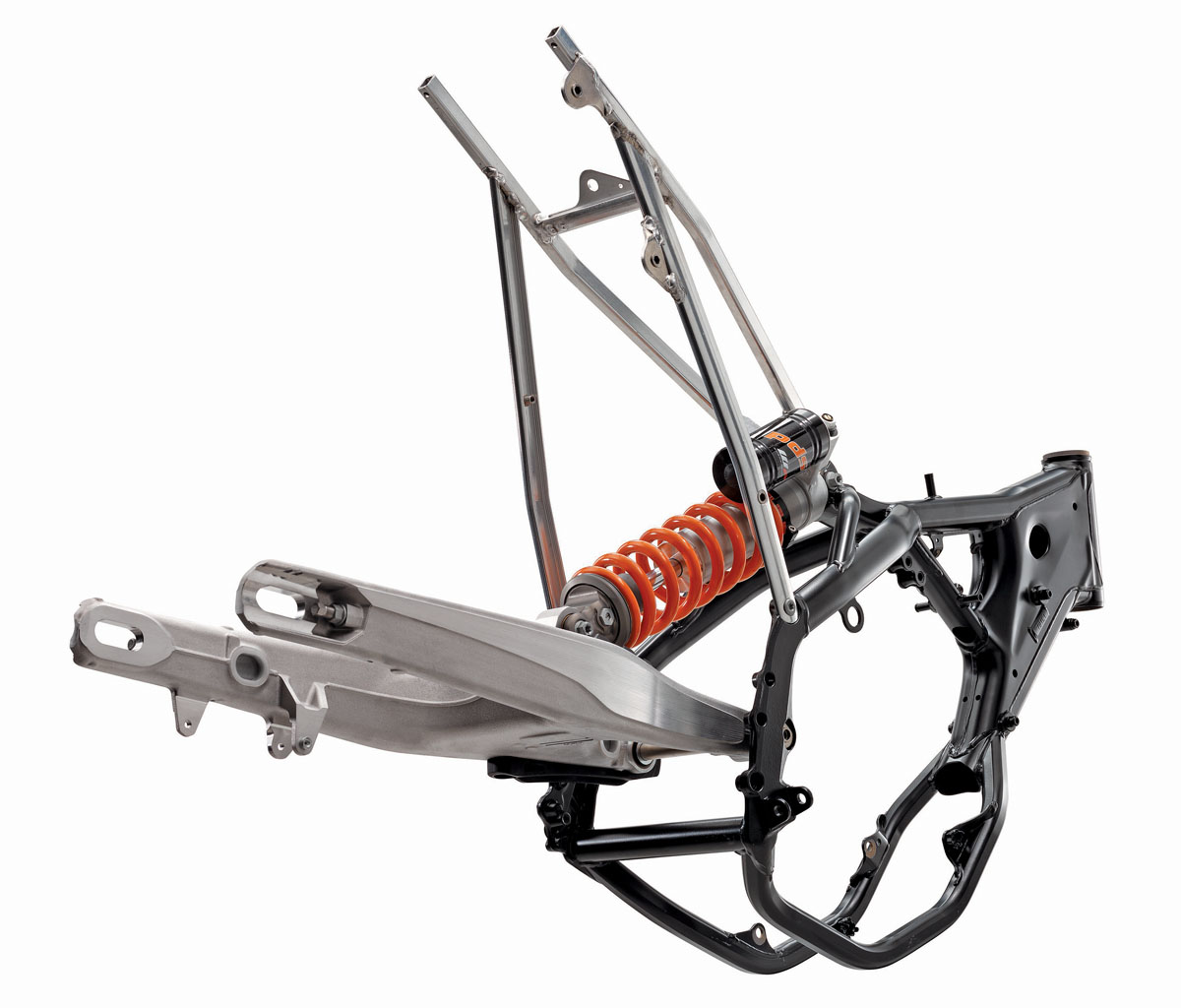 THE BACKSTORY
Back in 1996 KTM’s off-road bikes had linkage connecting the rear shock to the swingarm, just like everyone else’s. Then came the 1997 Jackpiner. This was a limited-release bike that commemorated the 30th anniversary of the first KTM/Penton motorcycle sold in America. It was named after Penton’s most famous model, colored blue and had John Penton’s signature on the front fender. There were only 133 of them sold. The importance of that bike, however, extended far beyond its numbers. It was the first KTM to use the Progressive Damping System (PDS) and had no linkage, only a solid mount between the swingarm and the Ohlins shock. Within the shock there was a needle that would engage a twin-piston design, progressively increasing damping through the stroke of the shock. 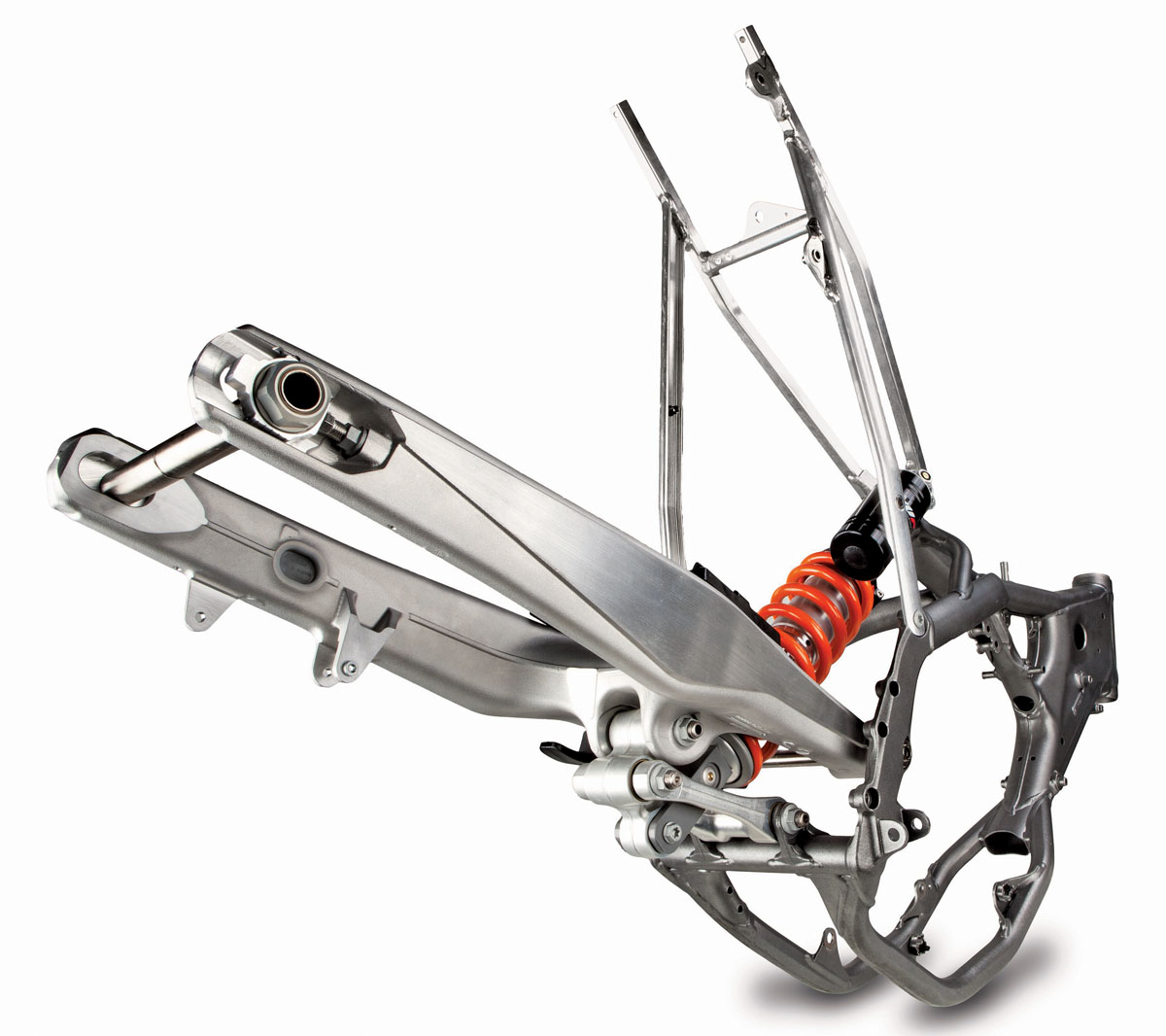 Within a year most of KTM’s production motorcycles had PDS, using a WP shock rather than an Ohlins. It became a KTM trademark. Many riders loved it; some didn’t. Mike Fisher had some success in Supercross during the subsequent years, but for the most part, KTM became known as an off-road brand. Perhaps the most negative publicity came when Jeremy McGrath signed to ride for KTM at the end of his Supercross career. He reportedly hated the mannerisms of the PDS rear suspension and retired in 2002 after a short time with KTM.
In late 2010 Roger DeCoster signed to manage KTM’s pro motocross team. It might or might not be a coincidence that the 2011 KTM 450SX-F had linkage-style rear suspension. Over the next few years KTM divided up the tasks; the motocross models got linkage while the off-road bikes—namely the XC-W and EXC models—stuck with PDS. It gets a little confusing when you get into the XC models (without the W on the end). They are motocross bikes repurposed for off-road racing, so they have linkage.

WHO RIDES WHAT?
In the U.S., most pro racers use linkage models. That includes all the motocross riders and most off-road guys. KTM’s factory GNCC, national enduro, EnduroCross and desert riders all ride XC versions, which is exactly what that model is made for: high-end racing. Interestingly enough, it’s the other way around in Europe. Taddy Blazusiak and Jonny Walker both ride with PDS rear suspension in Super Enduro, their version of EnduroCross. Over there, there are no XC-W or XC models. They call their off-road bikes EXCs.
In the World Enduro Championship, the four factory riders use PDS. That includes Christophe Nambotin, Nathan Watson, Ivan Cervantes and even American Taylor Robert, who switched camps when he went overseas. The battle lines have been drawn.

THE NUMBERS
From an engineering point of view, the differences are very straight forward. PDS is very simple and low maintenance. There are no pivot or bearings to grease. Without linkage, a motorcycle has more ground clearance, which can be an advantage on logs and obstacles. A bike with PDS is also about 3 pounds lighter.
The advantage to linkage is that it can have more of a rising rate. Back in the early ’80s, several manufacturers came up with this concept. Linkage allows a configuration where less shock-shaft travel is used in the initial inches of rear-wheel travel than in the final inches. Theoretically, this allows for plush movement on small bumps with good bottoming resistance. In truth, the same thing can be accomplished with multi-stage compression damping. Fixed shock mounts can also be situated to provide for a limited rising rate. Linkage simply gives a suspension tuner more tools to work with.
In the motocross world, the question is moot. KTM no longer offers PDS on any of its motocross bikes, and virtually all other manufacturers use linkage. In off-road, however, the debate is alive. We decided it was time for a little back-to-back testing ourselves.

BACK TO BACK
We had a couple of 2016 KTM off-road two-strokes in the shop that were ideal for the task. One was a 2016 250XC (with linkage) and the other was a 300 XC-W (without). Both are closed-course two-strokes aimed at off-road riding. We took them to our favorite trail zone where they could be subjected to virtually everything.
The first problem that you have to deal with in this type of comparison is setup. The preload on the XC is generally set to 105mm to 110mm of sag with the rider on board. Popular wisdom is to adjust the PDS to 3mm of spring preload. With the bike unladen, that’s around 40mm of sag. With a 170-pound rider, this works out to around 120mm. So already you have a very different riding attitude on the two bikes. When you factor in the intended use of these two bikes, it gets more complicated. The XC is a race bike and the XC-W is a trail bike. Accordingly, the XC is much stiffer. When you ride the two bikes back to back, that fact overwhelms everything else. Both ends of the XC ride higher in the stroke, while the XC-W sinks deep into its cushy little world. On technical, low-speed trails, the XC-W is a much more comfortable motorcycle. It sucks up little bumps and rocks while the XC shakes you up. When you go a little faster, the XC is more stable, while the XC-W dives and moves around excessively in its travel. All of this has nothing to do with the linkage, or lack thereof. It’s just that the two bikes have different applications.
Despite that, some things are clear about the two systems. The PDS system seems to extend more on downhills. In the past, riders have accused this system of having a stinkbug feeling. We never really felt that way on level ground; only on steep downhills. Several years ago the shock angle was changed on the XC-W to combat this, and even today, a common modification is to shorten the shock by 2mm. We wouldn’t bother. A good suspension tuner can make the PDS system sit up and do tricks. The system has been around so long that most avenues have been explored. There was a period where many riders thought that progressive springs were the hot setup. Some still do, but for the most part, suspension shops have figured out how to duplicate that feel with valving.
We spent a little time riding EnduroCross-style logs to see if the linkage bike had any disadvantages because of ground clearance. It’s not a serious issue. If you actually get stuck on the linkage, chances are that you had already messed up—the slightest bit of momentum will cure the problem. Still, it’s possible that you could lose a fraction of a second in a race against someone without linkage. It’s interesting to note that Taylor Robert rode the SuperEnduro series in Europe on his U.S. bike with linkage. Then he rode the World Enduro Series on a PDS bike. Reportedly, he’s indifferent as to which system he uses.
That’s how we feel too. We like each of these two bikes best in its own environment. We don’t see any reason to try to modify an XC-W for motocross any more than we would want to go in the other direction with the XC. The engineers at KTM know what each bike is supposed to do and where it’s supposed to go. If you do too, then choosing the right one isn’t so hard.