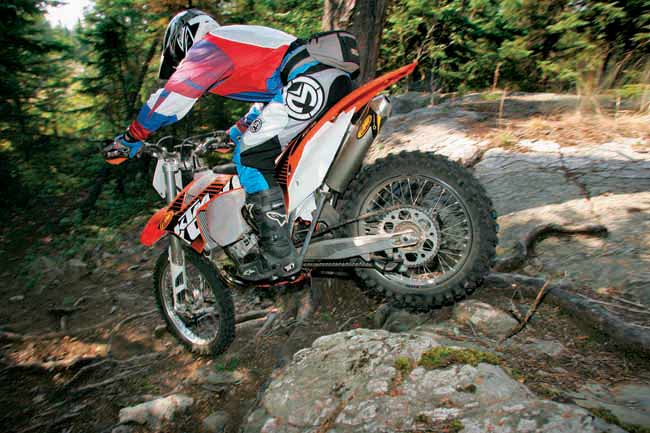 KTM prides themselves on being the ultimate niche marketer. Scoffed at a few short years ago, they now own the off-road world, and they deserve credit for their constant appetite for improvement. KTM has almost single-handedly forced the continued evolution of the two-stroke, with yearly innovations and thoughtful technical improvements. Racing is an integral part of their development program, and KTM has dominated almost every facet of off-road competition. But there-in lies the rub. Where does their 200XC-W fit into the puzzle of machines designed to win races?
RUB-A-DUB-DUB
2012 marks the return of the 200XC-W to KTM’s lineup following a one-year hiatus. The engineers made major changes to just about everything except the engine, which has only received subtle modifications. No worries, since KTM’s target audience liked the powerband the way it was. The frame is brand new and incorporates KTM’s PDS single-shock non-linkage, which is designed primarily for off-road. With a central shock mount and better torsional rigidity, there is decreased longitudinal stiffness and more isolated shock force. The goal is a smoother, more tractable ride from a bike that is still around 5 pounds lighter than a standard linkage-equipped machine. The swingarm is a new one-piece unit that is cast and features improved flex characteristics. Out back, the WP PDS damper is 7mm longer and uses a new preload adjuster.
The WP fork on the 200 uses their open-cartridge technology, which is more off-road-friendly than the closed systems found on the SX and XC models. All of the XC-W line gets the open-bath design, while all of the XCs (off-road with linkage) get the moto-oriented closed-cartridge fork. Also, the XC-Ws get a new (or old?) triple clamp design that uses a two-bolt cinch (rather than three) for improved flex and feel. The clamps are cast, rather than forged, targeting feel over rigidity.
A new translucent tank holds 2.64 gallons of fuel and retains the snap/lock gas-cap design that is either loved or despised. New plastic hand shields mount at the lever points, and like the entire XC-W line, the 200 uses Brembo components at the brakes, master cylinder and hydraulic clutch. Neken bulge bars mate to Renthal grips. It comes with a kickstand, Dunlop Geomax 51 tires, new Excel AL7 rims with nickel/zinc-coated spokes, and new bodywork, including a white airbox, white rear number plates, and a redesigned reinforced rear fender for enhanced ergonomics and better contact points. None of the two-stroke KTMs, neither the XCs or XC-Ws, come with lights or a spark arrestor, since they are not green-sticker legal. The straight-through muffler uses KTM’s excellent web mount, and the chamber is plated to resist rust.
The engine is a six-speed, power-valved unit that has a new ignition curve, a lighter kickstarter and a new intake boot that charges the intake for increased power. It has a Keihin carburetor that flows into the cylinder through a VForce reed valve.
WHO DOES IT FIT?
We got to test this wild machine in its element—the tight woods and bony terrain of Michigan’s Upper Peninsula. It feels incredibly light, starts easily (though the kickstarter lever is high) and has a very quiet exhaust note. But more important, it makes incredible bottom-end power for such a tiny-cylindered machine. Every rider praised its ability to lug, chug and make traction. If there’s a drawback, it’s the lack of rev, but the only people it offended were of the hammer-it-hard ilk. We loved it. Even our 200-pound-plus editor Tom Webb piloted the machine, and although it was the smallest bike that he’d ridden since his Honda 160, he fought off the advances of others who wanted time on the 200. Webb called it MTB light. It didn’t yank on his arms, and it short-shifted better than most 250s. He could crawl and flounder and the motor wouldn’t stall. Through incredibly tight woods and challenging terrain, it made copious amounts of low-to-mid power, letting you search for traction to maintain momentum rather than having to clutch it and spin the rear tire.
In its proper habitat, the 200XC-W is quite the handler. Suspension settings target the 150- to 170-pound rider, and the action is just firm enough to handle some higher speeds, but is relatively plush for rocks and roots. The open-cartridge fork is more at home in the slow nasties than the fast whoops, and it has an adjustable-preload system that can alter the fork-spring tension. For our big dudes, we added a few turns, but get too much preload on the springs and bad things will happen. On the shock, we ran between 100mm and 105mm of rider-induced sag (if possible), toyed with the compression damping only at the high speed for bigger boys, and left it about stock for the normal rider. It tracks, it responds to input, and it takes the big hit much better than older PDS systems.
There’s a really good chance that the KTM 200XC-W will never win a National Enduro, GNCC or OMA overall. Yet it goes down as one of the best trail bikes we’ve abused in years. If conquering ugly terrain is your vice, and using the least amount of energy possible is crucial, then the 200XC-W is pure terror. This machine rocks hard in stock form, and whether you’re young or wrinkled, skinny or super-sized, it has the right power to navigate the wicked woods of the east.