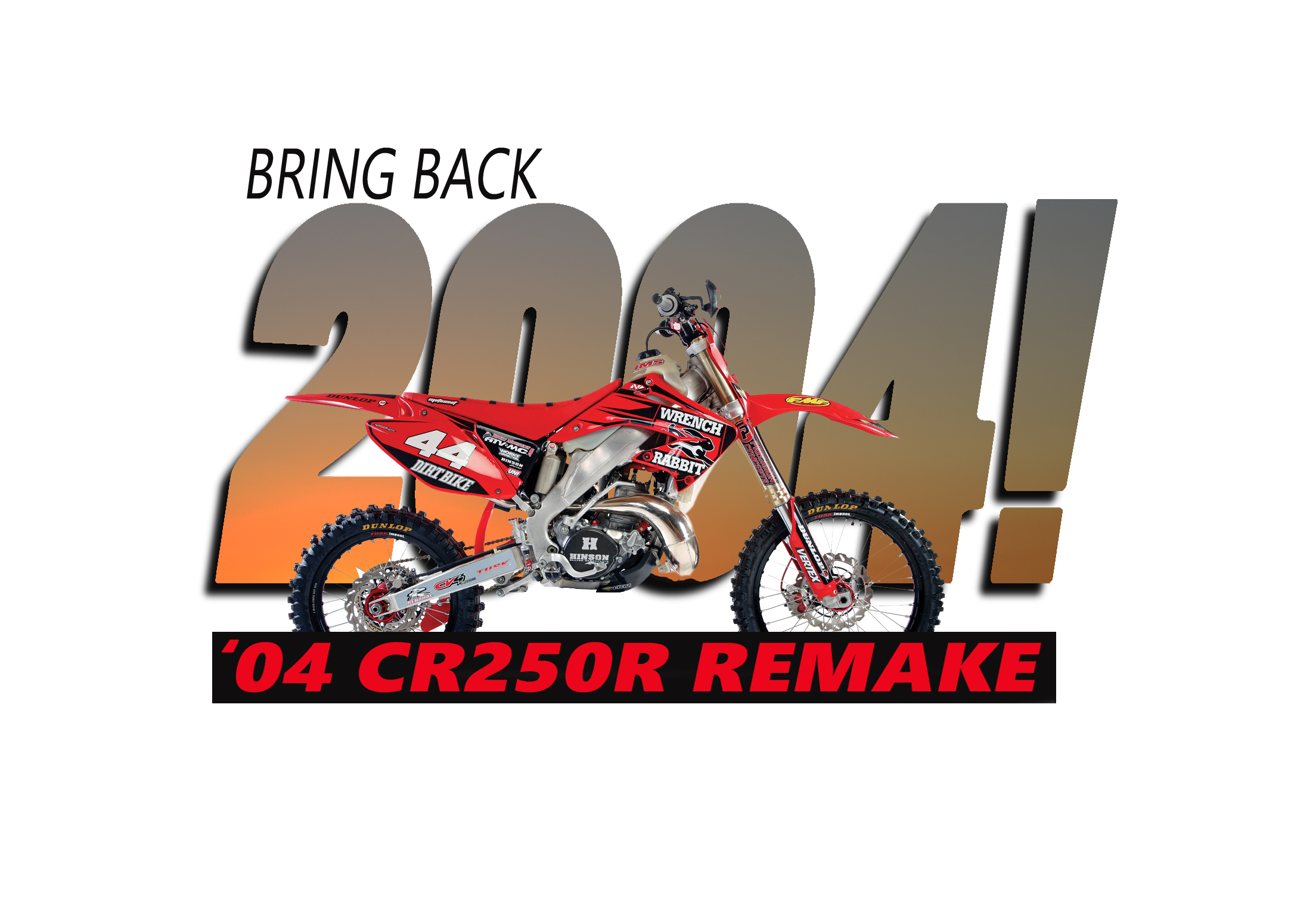 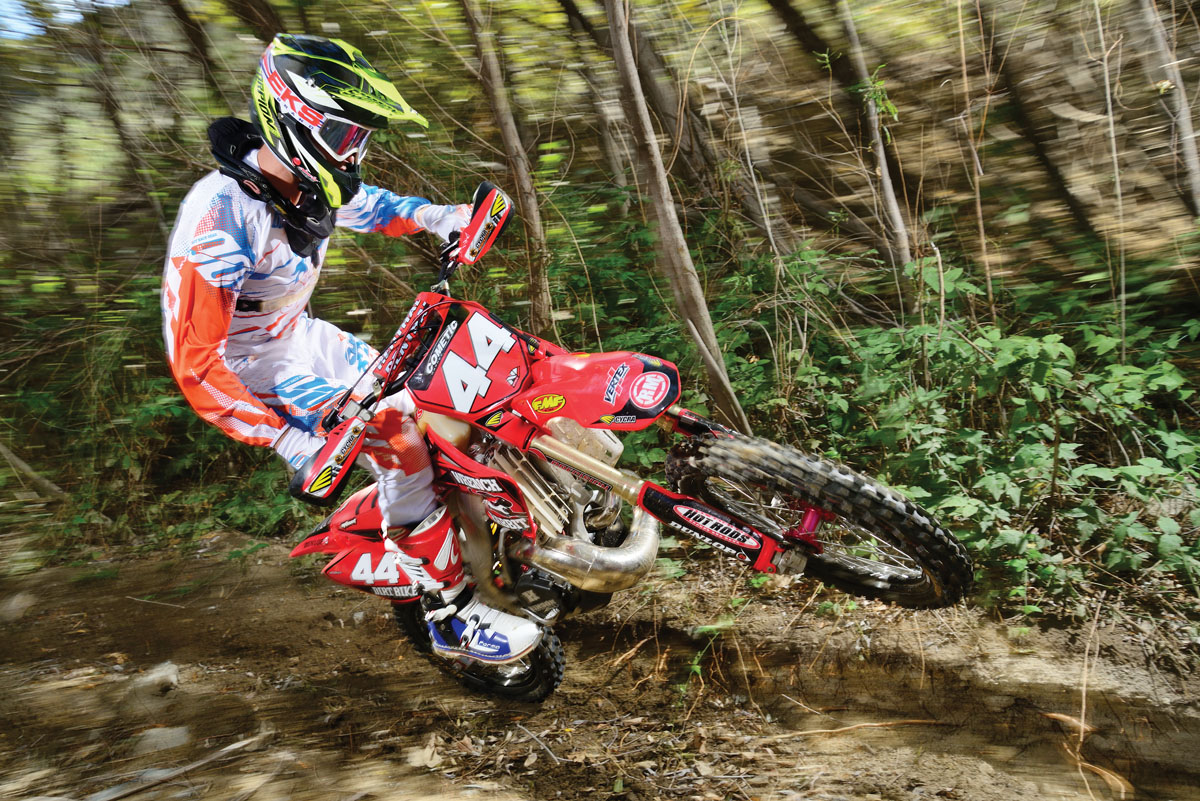 For over a decade the motorcycle industry has been four-stroke-crazy. Every major Japanese manufacturer focused development exclusively on the progression of four-stroke technology and pushing two-stroke development down their priority list. We are starting to see a resurgence of interest in older two-stroke machines. There are usually two types of used two-stroke projects—the refresh and ride and complete rebuild. If you come across a refresh and ride, it’s all smiles from day one—that doesn’t happen very often. As a matter of fact, your odds of finding a unicorn are probably better. The other type is the complete rebuild. During this type of build, smiles and frowns work together in unison, creating a roller coaster of emotions more volatile than a teenage girl. This CR250R project is the latter. 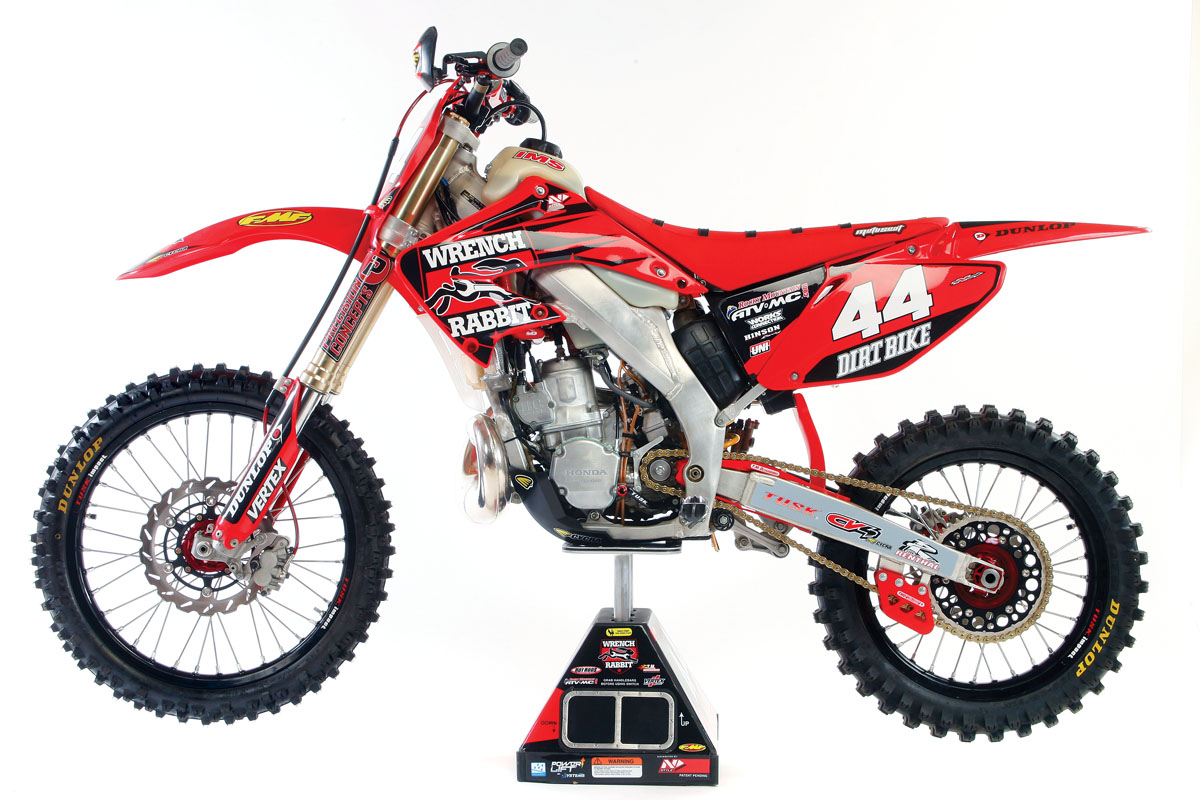 GIVING IT LIFE
When the engine is partially disassembled, this is a bad sign, because it means the old owner experienced a problem, thought they could fix it, got to a point that they realized it was beyond fixing and stopped, so be prepared to get your hands dirty if you see this. Our Honda had been a victim of an improperly old air filter. As a matter of fact, we don’t think it was oiled at all, and it sucked a mountain of sand right into the bottom end, leaving a path of destruction in its way. Wrench Rabbit makes a complete top- and bottom-end rebuild kit that includes a complete Vertex gasket kit, including seals and O-rings, Vertex piston kit, Hot Rods crank, Hot Rods main bearing with seal kit, transmission bearing kit, counter balancer bearing with seal kit, and a water pump kit. So, almost everything needed to professionally rebuild a complete two-stroke engine internally. This kit sounded perfect for our application. With all the sand the engine sucked down our cylinder, it was in need of some attention, so it was sent out to Millennium Technologies. They have a proprietary Nickel Silicon Carbide (NSC) cylinder plating process and cylinder repair service that comes backed by a lifetime warranty with a fast turnaround. Millennium also offers performance services that include big-bore capabilities, but that’s for another build down the road. On this build, everything was returned to OEM specifications with no additional modifications. We sent the Vertex piston with the Wrench Rabbit kit to Millennium so they could match the specs exactly. The transmission was inspected, and all the gears passed with flying colors. The 2004 stock clutch and basket had seen better days, and after over a decade of abuse, the basket had grooves and the rubber bumpers on the drive gear about fell out in our hands during tear-down. We replaced the complete clutch system with a Hinson Racing billet-proof model. Hinson’s kit comes with a basket, inner hub, pressure plate, fiber plates, steel plates, high-temp springs, rubber cushion kit and a CNC-machined billet-aluminum clutch cover—everything needed to make it better than new again. With the engine bolted back together with OEM specs, we decided to add a few bolt-on performance items in hopes of enhancing the power without going overboard. We teamed up the V-force reed cage system with an FMF Factory Fatty pipe and Shorty 2.1 silencer combo in hopes of giving our CR250R just a little more authority. That pretty much took care of the engine department hop-ups.
There are a few key areas to pay attention to when restoring an older two-stroke. We just talked about the engine, but the entire cooling system and probably the most overlooked items are the chassis bearings. Radiators take abuse and can be very expensive to replace, especially on older machines. We sent our mangled radiators out to ICW for some straightening and a little upgrade in the strength department with some custom bracing. All the chassis bearing were replaced with Pivot Works OEM-style bearings. Pivot Works makes a variety of kits for replacing broken bearings, as well as internal suspensions kits for shocks and forks. Bob Bell and the crew at Precision Concepts gave our CR250R a once-over in the suspension department. We had them replace all the seals, bushings and, of course, the oil while they were in there. Bob’s crew re-valved both ends for off-road terrain. They are very familiar with older Hondas for off-road applications; after all, they are a huge part of why factory Honda won all those Baja championships.
With the major necessities taken care of, it was time to give our CR250R a makeover in the looks department to highlight all the new parts under the surface. Cycra was a huge part of this, along with a little Jay Clark innovation. The front end was updated using a Cycra front number plate for a 2015 CRF and front fender for the ’09–’13 CRF. This doesn’t bolt right on; a custom bracket for the front plate is needed for mounting. We went with red Cycra plastics on the remaining items, with a custom-ribbed gripper seat cover from Motoseat, topped off with Works Connection accent items and a custom graphics kit from N-Style. We also added a few off-road essentials that included an IMS oversized tank, a set of Tusk Impact wheels with an 18-inch rear, Dunlop AT 81 tires, Cycra handguards, and a TM Designs slide and Glide kit. 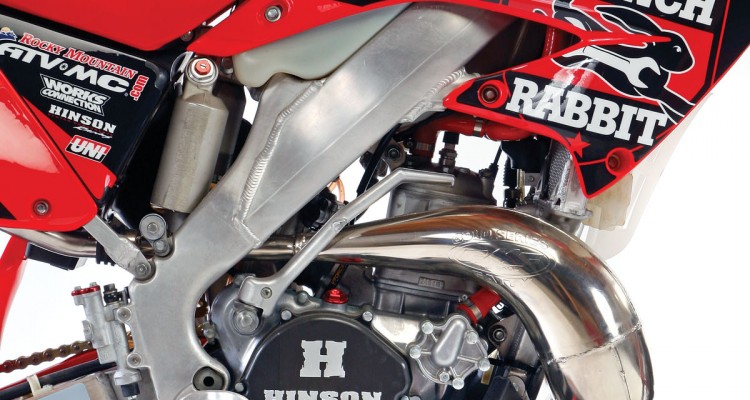 THE REBIRTH
Was our CR250R rebuild a success? Well, as soon as we get this permanent smile off our faces, we can start telling you how big of a success story it is. Lots of man-hours in the garage went into this build, and it’s definitely a labor of love, but when a bike comes together like this one—looking killer and performing just as well—we swell up with pride, making every minute of every hour worth it 10 times over! This build will be producing lots of smiles for years to come. To see a video highlighting the build and to see the bike in action, check out the video from Dirt Bike magazine’s YouTube channel below.

SCIENCE OF SUPERCROSS: THE SEAT BOUNCE