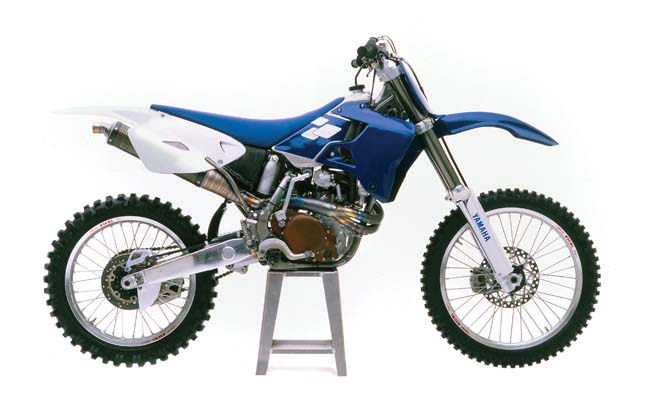 It was a different world in 1997. Two-strokes ruled the roost, and although some small manufacturers had good luck with four-strokes, they were off-beat novelties. Then Yamaha and Doug Henry changed everything with the YZM400. In ’97, Yamaha used a provision in the AMA rulebook to allow the development of a new bike. This exemption waved the production rule for one year, after which the manufacturer would have to race a production bike. It was an anything-goes rule, as long as the bike was less than 560cc.
The project manager for the YZM was Shiohara San, and he took just six months to bring it to life. Much of the technology came from the automotive motor that Yamaha had in Damon Hill’s F1 race car. The early version was 396cc, weighed 227 pounds and was said to produce 57 horsepower at 10,000 rpm. In Europe, the bike was raced in the 500 GP class and won twice, with Andrea Bartolini and Peter Johansson each collecting a win. But, it wasn’t until the Las Vegas Supercross at the end of the season that the bike really made believers of us. Doug Henry won the main event on the baked Nevada soil in Sam Boyd Stadium. Suddenly, it seemed that a four-stroke wasn’t a disadvantage at all. In fact, there were cries that four-stokes had an unfair displacement advantage, and soon the displacement ceiling was dropped to 450cc for all thumpers—Yamaha had left most of that on the table anyway.
Even though Doug Henry’s win was a watershed moment in the history of four-strokes, it didn’t exactly open the floodgates. It would be years before another four-stroke would win in Supercross. But thinking did change. From that moment on, everyone knew the day of the four-stroke was coming.
Share FacebookTwitterGoogle+ReddItWhatsAppPinterestEmail