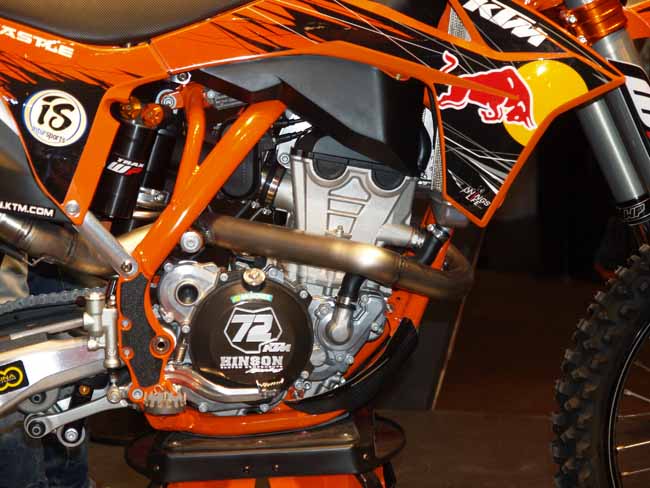 We had been hearing little teasers for weeks. In fact, one of the prototypes was even ridden in the MX of Nations. But now all the rumors can be laid to rest. The KTM 350SXF motocrosser was officially unveiled in Italy at the EICMA show.
Stefan Everts pulled the sheet off to reveal a totally new machine. The 350 isn’t a bored and stroked 250 or even a sleeved-down 450. It’s all new, from the motor to the frame and suspension. This is the first KTM motocross bike to have linkage rear suspension in years, and the first ever to  have fuel injection. But the heart is the mid-size motor, which Everts says almost made him come out of retirement. He had been working to develop the machine for over two years and now he says it’s competitive with any bike in the MX1 (450cc) class. The frame is steel, but it looks like nothing in the current KTM line. Likewise, the swingarm was developed specifically for this bike. The fork and shock are still WP units. And like KTM’s 450, starting is electric without a kickstart backup. On the pre-production unit that was shown, Talon wheels and a number of other non-standard parts were present.
Production units are still months away from the U.S. But it’s reassuring to know that even in a slow economy, progress is being made.

Stefan Everts pulls the cover off the bike he built.