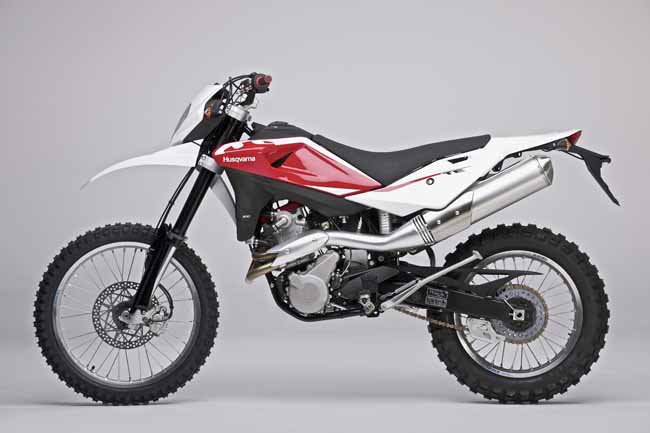 It was obvious from the hole in Husqvarna’s 2010 line up that a new bike was on the way. The old 610, which could trace its roots back to the first Swedish Husky liquid-cooled four-stroke back in 1986, was gone. That was especially significant because the bike was the basis for a good-selling Supermoto machine in Europe. There were rumblings that a new large-displacement platform was on the way.
Husky’s World Enduro contender Antoine Meo pulled the cover off the new TE630 dual-sport and Supermoto bikes at the EICMA show in Italy. The bikes use a new Mikuni fuel injection system that makes use of Mitsubishi injectors. Interestingly enough, they use existing technology in several areas. The single backbone frame uses a design that goes back to the original Swedish Husky 510, while the motor is based on the existing 570 powerplant, but with a 100mm bore. The bike has a hydraulic clutch and twin silencers that are sleeved in stainless steel.
A change in the rules for European Supermoto racing prevents the 630 from being raced in that series, where Husqvarna dominates. But the dual-sport version is what the American market really wants and will get very soon. For more details, check out the official Husqvarna press release in the NEWS column.