CORTEZ CRUISER: An XR650R finds a second life doing what it does best 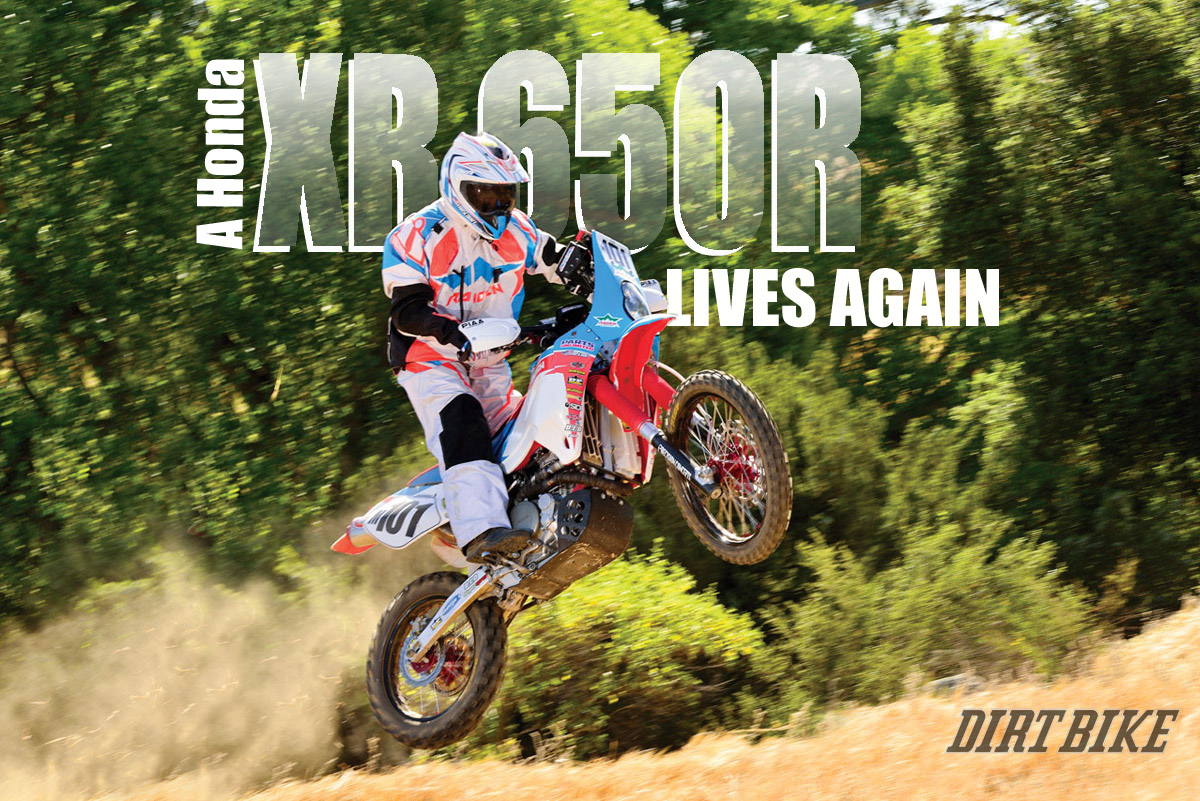 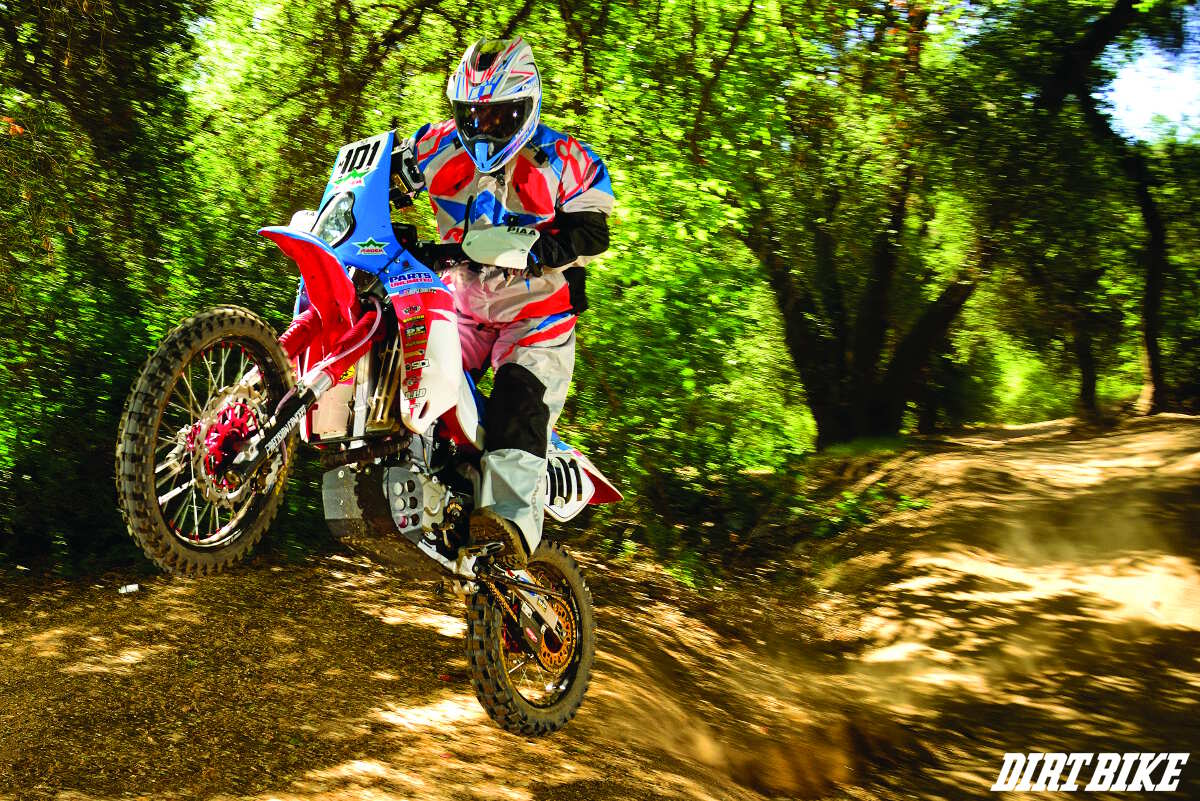 If ever there was a bike that failed because it was too good, it was the Honda XR650R. It arrived at the beginning of the millennium as a replacement for the air-cooled Honda XR600R. The new, liquid-cooled 650 was a purpose-built, high-speed Baja cruiser designed for the obsessive goal of winning the Mexican 1000. Bruce Ogilvie made the bike come to life through sheer willpower after years of painfully campaigning his aging fleet of XR600Rs against the faster and lighter Kawasaki KX500s.

It went into the Worst Timing Hall of Fame. The age of the 450 had arrived. Motocross bikes upsized to 450 four-strokes, then rally bikes downsized to 450s. It turned out that no one wanted to ride across the desert at over 100 mph, so there was no room for a heavyweight off-road race bike in the new age, no matter how good it was. There was no room for the XR650R.

Eight years have passed since the XR650R was discontinued. Oddly enough, the air-cooled bike that it was supposed to replace is still around, now called the XR650L dual-sport bike. But, for those riders who lived and raced in the era of the 650R, it’s remembered and revered as the best of its kind, even if “its kind” is a very narrowly defined genre. They are sought out and horded by those who know what they are and have a need for something that can go very fast and far. That’s the story here. The “Cortez Cruiser” was salvaged from the wasteland of online ads and repurposed for the NORRA Cortez Rally. This is one of very few Rally Raid-type events taking place in North America. It’s a three-day race starting in Mexicali, where the riders are responsible for their own navigation. No arrows, no ribbons, no pre-running—only your road book and a GPS, just like Dakar.

Mark Vanscourt is our connection to the NORRA rallies. He helps test and develop Raiden adventure gear in very harsh conditions and was a part of Raiden’s Triumph-mounted team in the Baja Rally late last year. The Triumphs were beautiful and well-built, but they weren’t really racers, even if they were as fast as bullets on the road. The XR project was a more serious effort at being competitive. It started about four months ago and was completed just in time for Cortez. Unfortunately, Mark was sidelined with a shoulder injury, and so the bike was diverted into our hands. We swear, we didn’t do anything to Mark.

If the original XR650R had become street-legal and had electric start, maybe it would still be here. The Cruiser had at least half of that formula. It originated from Montana and came with a license tag. Mark made plans to install an electric starter but never got that far. Baja Designs discontinued the kit it once sold, and most of the others are more rumor than fact. The best idea we heard was to install the motor from the TRX650 quad, which is a project for some other day. Beyond that, a rally has some very specific equipment requirements. The road-book holder and electric advance motor all came out of the Raiden parts boxes and are the same Aurora products that most of the Dakar guys use. The Acerbis tank holds 6.3 gallons and is good for well over 100 miles. It has an IMS Dry Break filler. The fairing is a very specialized item. It was originally manufactured in the U.S. by a small outfit called Kenaroo. Now, a company in Greece called Perfect Fairing has the tooling and should be able to make them available on a special-order basis. A seat from Seat Concepts was also installed.

The wheels that came on the bike were retired to the “spares” box, and a set of Warp 9s was installed with bib mousse inserts. The front wheel has a 320mm rotor, which was originally designed for Supermoto. Then the setup went much as you would expect for a high-speed racer. It got a GPR steering damper, and Precision Concepts re-valved the suspension. Neither of those items had to be explained to us, although we admit that a stock XR is pretty stable without any modifications at all. The motor only had a Hinson clutch and a very interesting old-school, megaphone-style exhaust from XRs only.

GO TOO FAST, THEN UPSHIFT 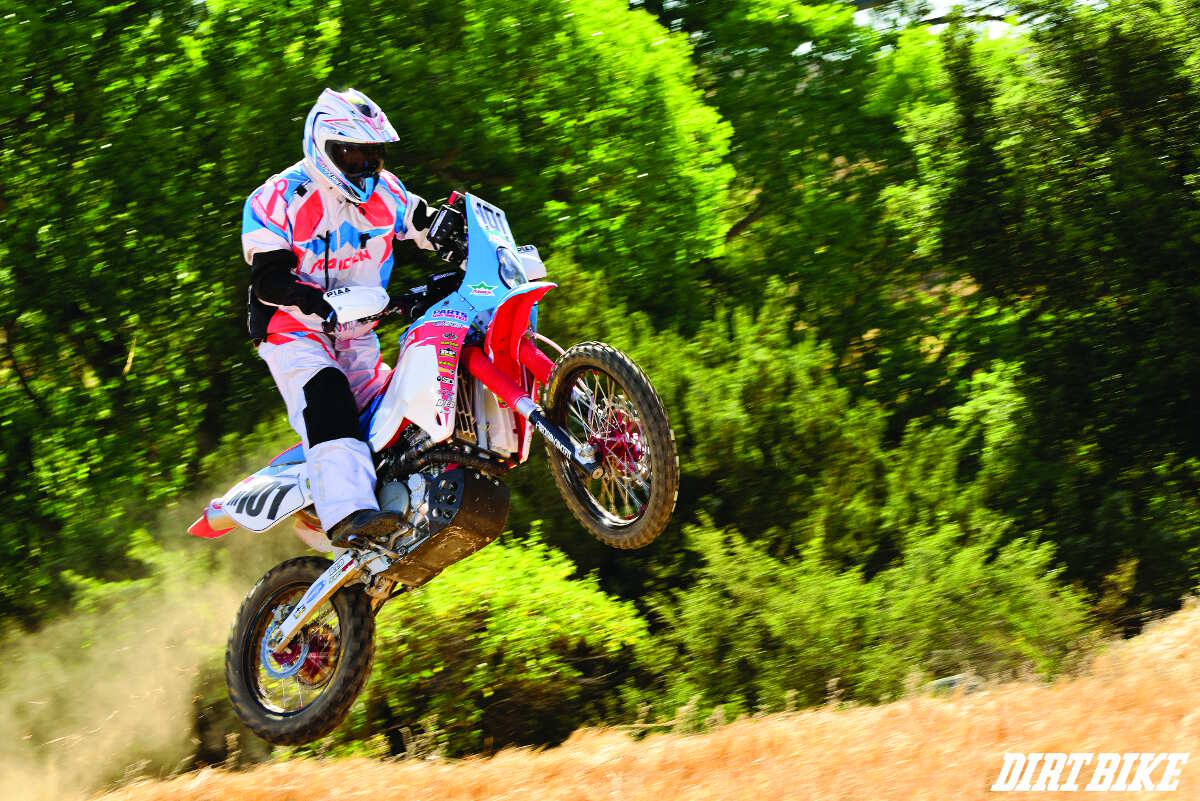 Riding the big XR was a blast from the past. You can’t really appreciate the bike in first, second or third gears. The peak power output is nothing exceptional by modern standards. But when you get the bike around 70 mph and then give it a good twist, you feel a surge of torque that no 450 can match. It just goes faster and faster while you seem disturbingly insulated and comfortable. It’s a little like watching a GoPro video of someone else going fast.

The XR goes perfectly straight and is absolutely, positively impervious to brutally rough terrain. The suspension has a cushy feel that bikes today lack. Even back then, we were amazed by the conventional cartridge fork. Upside-down forks had become standard equipment by the 2000s, and there were a number of racers who installed them on the big XR, only to be disappointed. The fork flexes in directions that modern forks are entirely too rigid to accomplish.

There’s no getting around the weight, though. According to our February 2000 test, the XR650R weighed 287 pounds without fuel. That was heavy even for 15 years ago. The Cruiser, with its fairing and a half tank of gas, is probably 320 pounds. You feel every bit of it. The XR is a big motorcycle, and the rally gear only makes it more massive. But everything is relative to something else. If we were to compare it to a modern adventure bike, it’s a feather.

Would the Cruiser work well in that role? Perhaps. The kick-starter would be somewhat of a burden, and there are no passenger accommodations. But, it’s comfortable and nearly vibration-free. When you see the Cruiser, it’s inevitable that the mental wheels start turning and future projects are conceived. The XR650R is that kind of motorcycle. It deserves another chance.