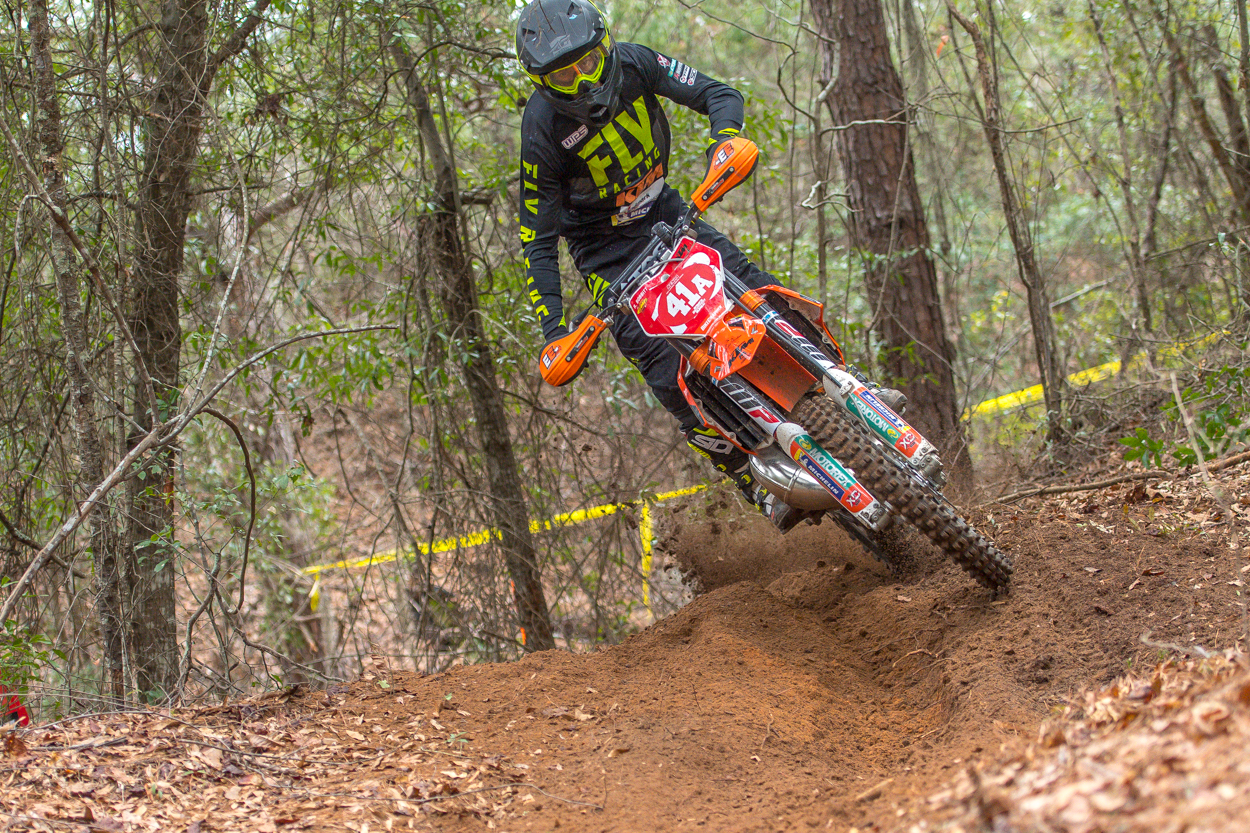 Russell Bobbitt claimed a big victory at the Sumter National Enduro in Wedgefield, South Carolina, marking the start of the 2019 Kenda AMA National Enduro Series presented by Moose Racing. Bobbitt’s win was somewhat of a surprise since the 33-year-old Georgia rider retired from full-time racing nearly two years. The Gnarly Routes KTM rider last won a national event in 2016, however at the Sumter event he managed to find a bit of that old Bobbitt magic racing a KTM 300 2-stroke, outrunning defending national champ Tely Energy Racing’s Steward Baylor by 16 seconds after six tests and 64 miles of racing.

This year’s Sumter Enduro was highly anticipated since it marked the 50th anniversary of the event, and the SERMA Club did not disappoint, putting on a near-perfect event. The turnout was massive, as well, with over 800 riders filling the start grids. In fact, the event sold out within 10 minutes after signup opened on the Internet, which is another sign that National Enduro is alive and well in the U.S.A.

Bobbitt started fast, winning the first three tests, as dark clouds threatened to dump rain on the area. Heading into the fourth test, Bobbitt enjoyed a 54-second advantage over Husqvarna/ Max Motorsports/FXR Racing’s Evan Smith, with Baylor another four seconds back. Baylor, who has been dealing with a nagging knee injury, made things worse when he took a practice crash a week before, but he was still able to get settled in during the second half of the race and started reeling off test wins in an effort to catch Bobbitt.

Evan Smith matched a career-best with his third-place finish. “I rode tight most of the day and I just didn’t have that comfort level I was looking for, but I think I was capable of going faster,” said Smith. “I had a couple of crashes that cost me some time, but I picked up some good lines and for the most part it was a clean day. I was ahead of Steward going into the last test, but I jammed my wrist and struggled to hold on.”

Mike Witkowski turned in a career-best ride with fourth overall. The Beta USA rider also finished second in test four, which is another first for him. Gas Gas North America’s Thorn Devlin looked impressive all day and rounded out the top five, finishing 36 seconds ahead of Ohio Husqvarna rider Cory Buttrick. Zach Hayes (KTM) overcame a crash in the second test to finish seventh overall and first in the NEPro2 class. “Seventh overall is a personal best so I’m really happy with that,” said Hayes. “After I crashed, I just put my head down and started charging.”

AirGroup/Enduro Engineering Husqvarna’s Jake Froman, who is starting his first full year in the Pro division, came away with eighth overall, just 23 second behind Hayes. New Zealand’s Liam Draper put his Tely Energy KTM into ninth overall, which was good enough for second in the NEPro2 division. Meanwhile, Tegan Temple (KTM) was 10th overall and third in NEPro2.

Mackenzie Tricker (KTM) got the season off to a good start with a big win in the Women’s Elite class, topping defending champion Tayla Jones (Hsq) by over a minute. These two battled back and forth all last year and it looks like 2019 will be more of the same. Brooke Cosner rounded out the podium on a KTM after posting some impressive rides.

Eight-time National Enduro Champ Mike Lafferty came out of retirement to compete, riding a KTM 500 EXC to the win in the AA division. Mike thrilled the fans with his go-for-it style and his trademark smile.

The Kenda AMA National Enduro Series returns to action on March 24th at the Alligator Enduro in Ormond Beach, Florida. For more information on the series go to www.nationalenduro.com.