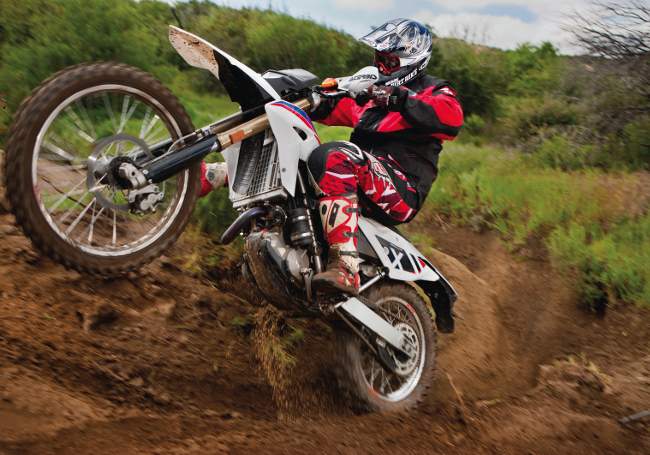 BMW’s G450X has been very mysterious. It was first announced in late 2007, apparently aimed at taking the dirt world by storm. At that point, the mission was clear. It was a hardcore dirt bike aimed right at KTM, as the two companies prepared to fight to be Europe’s largest motorcycle producer. But when BMW purchased Husqvarna, the role of the G450X became unclear. The bike arrived in the U.S. as a 49-state dual-sport machine, but all of the company’s effort was placed behind revitalizing Husqvarna. No one knew if the G450X had a future or what it was supposed to do. Was it a racer? Was it an adventure bike? BMW dealers certainly didn’t know, and their salesmen just hoped no one would ask.
The 2010 BMW G450X is here now, and the clouds are beginning to part. The new 450 is a single machine meant to contend in both the dual-sport market and the dirt bike market. It does this by being sold as a 50-state-legal dual-sport bike that can be converted into a real off-road bike without costing its owner a cent. It has the most impressive warranty ever connected to a dirt bike in the U.S. Not only does it have a future, it apparently is the future for both BMW and Husqvarna.

The list of elements that are different on the BMW is long. It starts with the countershaft/swingarm pivot and goes on and on.
STILL A MAVERICK
One of the things that made the BMW so confusing last year was the fact that it was so completely different from anything else on the market. In typical BMW fashion, the engineers didn’t care how the heck other companies did anything. The 2010 version is still offbeat. It has a closed-loop fuel-injection system, a countershaft sprocket that is mounted on the swingarm pivot, a clutch that is mounted on the crankshaft, a gas tank located under the seat, and dozens of other elements that are just different. Each one of those elements has been attempted elsewhere. It’s a testimony to German stubbornness that they all appear on the same machine and they all function with varying degrees of success.

The clutch location on the crank means that it spins about three times faster than a conventional clutch. The hub drives the basket, rather than vice versa, and the whole unit is very compact. The motor’s output shaft is hollow so that the swingarm pivot can pass through its center, and that further contributes to a very small overall engine package. The engine, by the way, is manufactured by BMW’s partner in Taiwan, as are some of BMW’s other motors.

The swingarm is extra long because of the countershaft design, which means that BMW engineers had to invent their own suspension design—it wasn’t like they could copy the layout of some other company that was doing the same thing. One of the big challenges is trying to deal with the effect of engine torque on the suspension, which is exaggerated by this setup. BMW does it with a no-linkage Ohlins shock mounted at a fairly laid-down angle. Up front, BMW uses a 45mm Marzocchi fork.

CONVERSION
Husky and KTM both offer fairly serious dirt bikes that are street-legal, as well as separate off-road machines. BMW offers only a street-legal version of the G450X, but hands you all the parts to make it a dirt bike. That includes gearing, a jumper to convert the EFI system to a competition map and a whole new muffler. The competition pipe is still reasonably quiet and has a spark arrestor, but it does away with the catalytic converter in the DOT pipe. BMW says this extra pipe adds $250 to the price of the bike, so if you don’t want it, ask for a discount. BMW gave the bike different fuel mapping this year in both stock and power-up modes. The jumper, or “Power Plug,” tells the ECU to abandon the EPA settings and technically makes the bike illegal on the street. The jumper is only necessary with the power-up pipe. But the most important extras included with the bike are the countershaft sprockets. Last year, the bike came with a 15-toother, which is what you were stuck with, as BMW sprockets were not easy to  find. This year, you get additional 13- and 14 tooth-sprockets with the bike.

The motor was designed in Germany, but manufactured in Taiwan by Kymco.

TRAIL WORTHINESS
Last year, we never quite understood the bike. The biggest problem was that we never got to see what it did well because of the tall stock gearing. This year, we rode the bike immediately with the 13-tooth sprocket up front and discovered the bike’s hidden talent. It’s an incredible rock climber. Who would have guessed that a dual-sport bike would be so good at low-speed obstacles and extreme sections?

The biggest advantage that the Beemer has is the motor. The power delivery is smooth and perfect off the bottom without a hint of the lurchiness that plagues so many fuel-injected bikes. It never stalls; it never flames out; it never coughs. The motor feels like it could be dropped into a trials bike. With the 13-tooth countershaft, you can climb almost anything. Still, there was a big jump to second gear, making it difficult to contend with anything faster than outright trials sections. It makes sense. This bike was developed for European racing, where extreme events like Erzberg and the Romaniacs take center stage. It’s a very narrow bike with a lot of ground clearance, so you can get it through tight spots and over big obstacles. Even the shape of the skid plate makes this easier, with a very smooth surface that’s much higher in front at the point of first impact.

And yet another factor that helps in tough terrain is the clutch. Honestly, we didn’t like it that much at first. It has a weird feel that takes some getting used to, and it always drags just a little bit. But as soon as you start over-using it on hills and in rocks, you quickly learn to love it. The clutch never overheats. You can work it to death and the free play doesn’t change. Even hydraulic clutches need to get a fresh gulp of fluid when the plates expand with heat. The BMW’s clutch isn’t hydraulic, but it always engages at the same point, in the same way, regardless of heat.

Once you venture off trails into the open, the bike isn’t as impressive. We wouldn’t call the G450X fast. Even with the power-up muffler and Power Plug in place, the BMW has fairly mild output compared to the Husky and KTM 450 dual-sport bikes. On the dyno it produces almost 45 horsepower, but it never wows you with outright acceleration. Most of the horsepower is down low; it doesn’t feel at all motocross-like.

The bike’s two weakest areas are the suspension and the steering, which seem related. Both ends are soft, even by dual-sport standards. The fork dives dramatically in turns. That makes the already-slow steering feel cumbersome. Some riders commented that the bike felt heavy. It’s not, but the steering requires a lot of muscle. And the faster you go, the stranger it feels.

We still wonder if the countershaft sprocket location contributes to the suspension issue. Last year we rode Kent Pfeiffer’s Best in the Desert BMW 450, which had factory WP suspension. It was much better than stock, but still weird. As the bike becomes more mainstream, we expect to learn more.

LIFE WITH THE ’W
Life with the BMW might be interesting. The gas cap is under a hole in the seat. The air filter is in a drawer over the motor. The bodywork is held on with little bolts that have a super-fine thread. If you want to work on the motor, you have to drop it out of the bottom, which means you can’t use a normal workstand. Heck, it won’t even sit flat on a stand.

All those things take some getting used to, but we’ll adjust. The bike is offbeat right now, but Husqvarna has already announced that it will build a bike using the same motor. And with BMW’s three-year, 36,000-mile warranty, you could ride three seasons without paying for a single broken part. That means BMWs will become mainstream dirt bikes in the future. It’s just a matter of time. q

WORCS Round 9 From Glen Helen Raceway