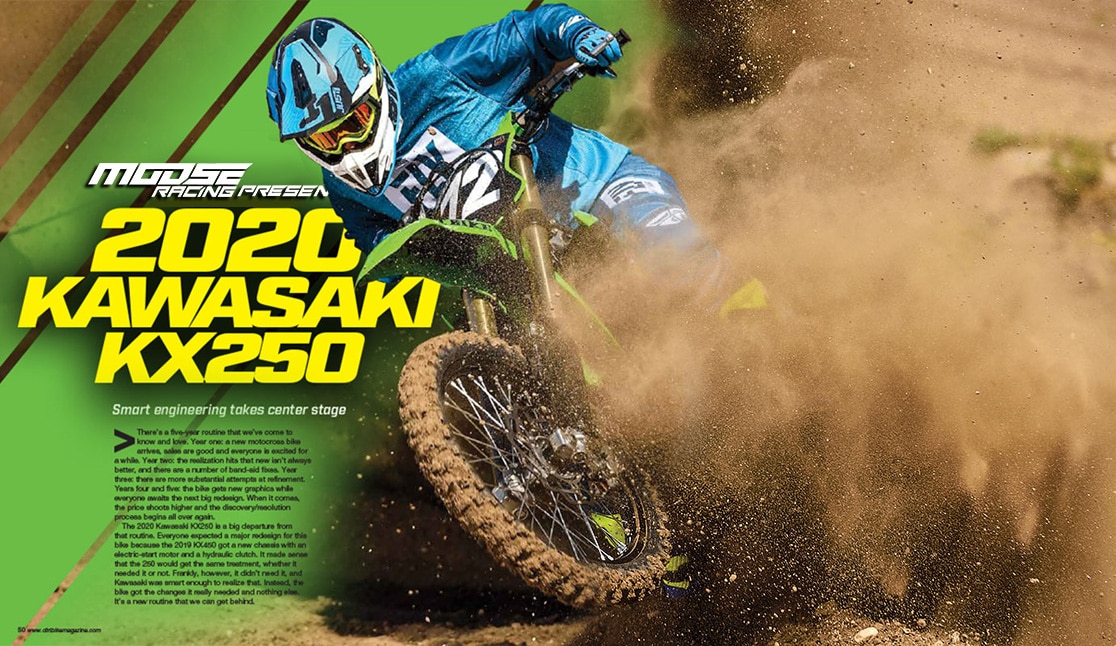 The 2020 Kawasaki KX250 is a big departure from the routine. Everyone expected a major redesign for this bike because the 2019 KX450 got a new chassis with an electric-start motor and a hydraulic clutch. It made sense that the 250 would get the same treatment, whether it needed it or not. Frankly, however, it didn’t need it, and Kawasaki was smart enough to realize that. Instead, the bike got the changes it really needed and nothing else. It’s a new routine that we can get behind.

WHERE WE STARTED
Kawasaki has always had a great 250 motocross bike, and the record book backs that up. It has won more pro races than anything in the class, mostly in the hands of the Monster Energy Pro Circuit team. It hasn’t won shootouts in recent years for one reason alone: it wasn’t fast enough. The Pro Circuit bikes might have been getting holeshots, but a showroom-stock 2019 KX250 had far less peak power than a KTM, Husqvarna, Honda or Yamaha. Despite that, there were so many things that were right about the bike. It had more low-rpm torque than anything in the class. It was the lightest of the Japanese 250 four-strokes, and novices absolutely loved it. That doesn’t sound like a bike that needs a total redesign. Somewhere on the 27th floor, Kawasaki’s upper management performed a cost/benefit analysis and determined that they could find the power without a total redesign. The result would be a bike with essentially the same suggested retail price as the 2019 model, which was thousands less than it would be otherwise. The price is $7795 compared to $9099 for the KTM. The only real issue is that the new bike would not have electric start or a hydraulic clutch like the new 450.

The key to the whole plan was a new valve configuration. Kawasaki redesigned the top end of the motor to use finger-followers between the cams and the valves. This allows for more aggressive tuning. Even there, Kawasaki was smart to use some existing parts. The followers themselves are straight out of a ZX10. The bore and stroke are also changed from 77.0 x 53.6mm to 78.0 x 52.2mm, meaning slightly more room for bigger valves. The air intake is larger and straighter, and there are mapping changes feeding the 44mm Keihin throttle body. It still has a secondary injector in the air boot. Other things that are the same: Kawasaki uses a coupler system for the end user to change mapping. The bike comes with three snap-in-place electronic couplers that can be swapped at the track, giving the rider quick access to three preloaded maps. If you want more than that, you can get the Kawasaki FI calibration kit, although that’s a $720 investment. 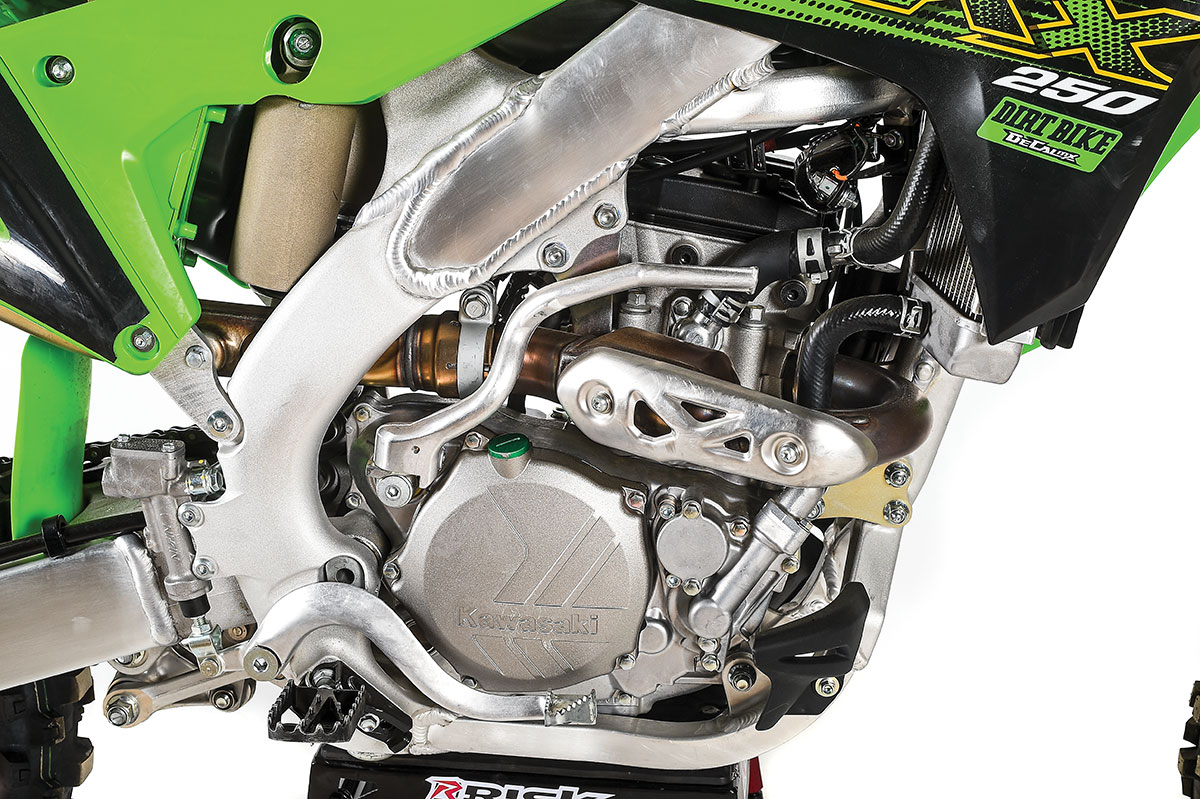 The chassis is mostly unchanged with a few exceptions. The most important is a switch in suspension makers. The previous model used a Showa shock and the SFF single-spring fork. This one uses KYB components, and the closed-cartridge fork has two coil springs. The frame has only minor changes, but the engine mounts are reshaped in hopes of changing the flex characteristics of the whole chassis for a more compliant feel. There are also changes in the brakes, the airbox and the muffler. All of these are very smart, economical changes. 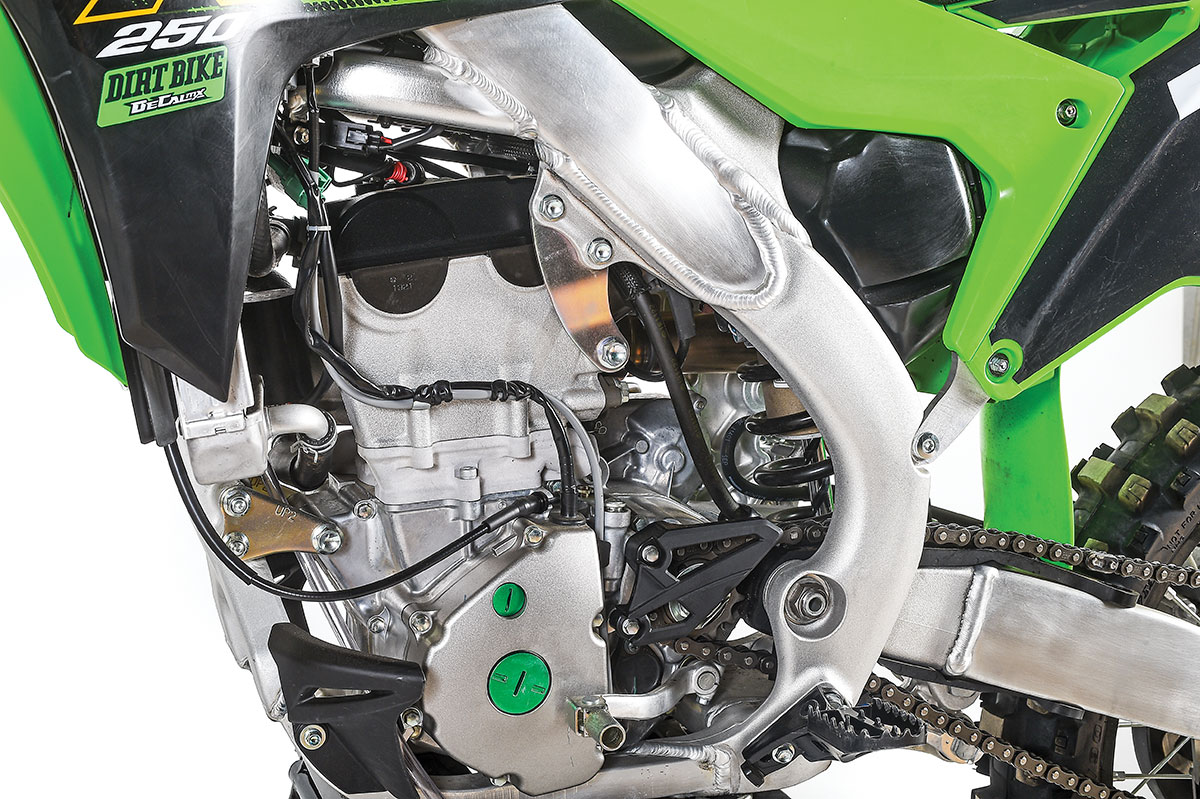 TRACK TIME
It might sound odd, but the 2020 Kawasaki KX250 changes the landscape of the whole 250 class, even though it’s mostly the same motorcycle it was in 2019. First of all, Kawasaki’s plan to find more peak power was an absolute success. All of a sudden, the KX is truly fast and will undoubtedly be among the most powerful in the class of 2020. As you might expect, the bike did lose some low-rpm power. In 2019 it had the most bottom end in the class, so it had some to lose. Now, it’s a little dead down low, but where the old bike was flattening out at around 10,000 rpm, the new bike is really taking off. The rev ceiling isn’t any higher; it still signs off around 13,500 rpm, but now that seems low, simply because the bike is still getting better and better right up to that point—then it just stops. This type of powerband is more in line with what KTM, Husqvarna and Honda are doing in the 250 class. Everyone is moving to more peak power at the expense of torque. Yamaha did the same thing to a lesser extent.

Is the lack of low-end power an issue? It depends on who you are. Previously, the Kawasaki was a secret favorite of novices and beginners. It was by far the easiest to ride of the 250 four-strokes. Most pros, on the other hand, never even noticed the KX’s torque. They generally don’t rely much on torque to get things done. The vast majority of riders are somewhere between those two extremes; they’ll use low-rpm power if they have it. Kawasaki does offer the means to tweak the power delivery through the coupler system, but this doesn’t result in a dramatic change. The white coupler is supposed to be the most aggressive. The black is milder, and the green is in the middle. In practice, they make for differences that are noticeable but not especially useful. If you can get a holeshot with the white coupler, you can get one with the black coupler. None of the maps allow for a higher redline or a return of the torque from 2019.

TALE OF THE SCALE
One aspect of the previous KX that everyone appreciated was the lack of weight. That’s still the case. It weighs 223 pounds without fuel on our scale. It’s the lightest of the Japanese 250s and only a few pounds off the KTM, which makes it a great-handling bike. The KX is super narrow and easy to toss around. The change in power output did result in a change in handling, which changes the way you approach some turns. In hard-packed, technical turns, you don’t steer through with neutral throttle like you could before. It’s more of a rear-wheel steering bike like a Yamaha. It’s still a fun, exciting bike to ride and a very stable bike at speed. It won’t do anything that surprises you.

Kawasaki fans will welcome the change in suspension, especially the fork. The old SFF fork was just that—old. It was adequate when it first arrived, but didn’t progress in a period when everyone was making big strides in suspension. The Showa wasn’t bad, but almost everything else in the class was a little better. The new KYB fork is more what we expect in 2020. It’s plush on small impacts without being divey in the turns. Some of our testing was with riders who were heavier than the norm for the 250 class, but it was easy to make them happy with a few clicks on compression. The rear actually required a little more setup. Most riders wanted more preload than the recommended 106mm of sag, eventually settling around 100. That allowed the front to bite better and kept the riding attitude more level. Kawasaki engineers say they increased the effective spring rates at both ends by around 5 percent, but the change from a single spring in front to two springs means you can’t get a clear picture from the numbers alone. On the track, the rear seems a little softer than the front, but it’s easily balanced out.

THE PRICE OF A BUTTON
Kawasaki clearly had a target price in mind with this bike. That’s why it didn’t get the electric start, a hydraulic clutch, a large-diameter handlebar or fancy new methods of changing the programming. It could use all those things, but having a low price is good, too. The bike still offers adjustable handlebar and footpeg locations. The brakes are strong, and the clutch pull is light. Overall, the Kawasaki 250 is excellent in all the areas that matter. It’s not the same bike it was in 2019, but it is a bike that’s more competitive and more likely to win races. And considering that it has already won a lot of races, that’s a very good thing.