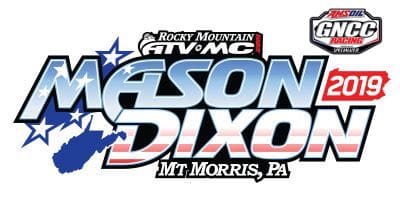 Round 11 of the 2019 Grand National Cross Country (GNCC) Series held in Pennsylvania was a 3 hour action packed race between Rockstar Husqvarna’s teammates Thad Duvall and Trevor Bollinger, Babits Kawasaki’s Jordan Ashburn, Red Bull KTM’s Kailub Russell and AmPro Yamaha’s Ricky Russell with every rider pushing till the checkered flag. The hotter than normal weather made conditions dry and dusty for the afternoon event.

Rockstar Energy/Factory Husqvarna Racing’s Thad Duvall would manage to make it through the grueling three-hour race, crossing the finish line 39 seconds ahead of the competition. With track conditions proving difficult for many other riders, Duvall and his team put in their best effort to keep pushing until the checkered flag came out. Duvall earned his fourth overall win of the season, and his second straight win at the Mason-Dixon GNCC in Pennsylvania.

Coming through second for the second race in a row was the AmPro Yamaha/Moose Racing/Parts Unlimited-backed rider Ricky Russell. Throughout the day Russell would find himself battling it out with several different XC1 Open Pro riders, but he would manage to hold onto the second place position as the white flag came out indicating one more lap to go. Russell currently sits sixth in the points standings with two rounds remaining in the season.

Rockstar Energy/Factory Husqvarna Racing’s Trevor Bollinger found himself in podium contention as the race wore on. Bollinger started the day in the sixth place position, but as time went on and riders found themselves struggling to stay going he continued to push through. Bollinger made the move into third as the white flag lap came out, and with one lap to go he would hold his ground until he saw the checkered flag waving.

Putting in his best ride of 2019 was Phoenix Honda Racing’s Andrew Delong. After starting back in the seventh place position, Delong would put his head down and push towards the front of the pack. Heading into the last lap Delong came through timing and scoring in the sixth place position, however, as he went out for one more lap he would put in the effort to move into fourth overall. Delong also moved himself to seventh in the national points standings after his finish on Sunday.

FXR/Husqvarna/SRT/Hoosier Layne Michael came through to earn a fifth overall at the Mason-Dixon GNCC. Michael would come through eighth on the opening lap, and continue to battle mid-pack until the last two laps. During the last couple of laps, Michael would find himself moving up through the pack as other riders machines were succumbing to the track conditions.

After leading the opening lap, and running second for majority of the race FMF/KTM Factory Racing’s Kailub Russell found himself giving everything he and his machine had to get back to the finish line as the checkered flag came out. Russell would finish sixth overall, salvaging valuable points in the National Championship standings.

FMF/KTM Factory Racing’s Josh Toth came through seventh overall as the checkered flag flew. Toth would work his way through the course, coming back from eighth and ninth place to salvage a top 10 overall finish position. Trail Jesters KTM’s Benjamin Kelley made his way to the XC1 Open Pro class, but did not have the day he hoped for. Instead, Kelley was unable to complete all six laps but after completing five he would hold onto eighth in the XC1 class.

After completing five laps, Lunova Racing/Team Green Kawasaki/Stiller Motorsports’ Chris Venditti would hold onto ninth in XC1. Our partners with the Japan National Cross Country (JNCC) joined us for the Mason-Dixon GNCC, and their Pro rider Takanori Nakajima earned a 10th place finish in the XC1 Open Pro class.

With Kelley moving out the XC2 250 Pro class, it was Tely Energy Racing/KTM’s Liam Draper coming away with his first-ever XC2 class win. Drapers consistency paid off after starting out second in the class and making the move to first once when the two-lap card came out and then again on the last lap. Coastal Racing Husqvarna’s Craig Delong came through second after battling his way to the front of the class. Husqvarna/Max Motorsports/FXR’s Evan Smith

The FMF XC3 125cc Pro-Am class had a lot of changes throughout the duration of the race. However, it would be XC Gear/Enduro Engineering/Husqvarna’s Jake Froman coming out to earn his first-ever win. Trail Jesters KTM’s Jesse Ansley, who currently leads the class points, held the lead after grabbing the holeshot. Ansley would fight back for a second place finish with Lojak Cycle Sales’ Chase Colville also battling back to round out the podium. Colville would hold the lead at one point in the race, but would suffer bike issues causing a long pit stop, but still fight back for that third in the class.

When the 10 a.m. race kicked off it was Rockstar/Husqvarna/Moose Racing/Shaw Wines’ Tayla Jones grabbing the early lead. However, Fly/Maxxis/Pro Circuit/KTM’s Becca Sheets would soon make her way to the front of the pack and make the pass for the first place position. Sheets and Jones would battle back and forth and after trouble on an uphill during the last lap, Jones would be able to make the pass on Sheets and come through to take the win. Sheets would come through second and Factory GasGas’ Korie Steede would battle forward to earn her place on the WXC podium for the first-time ever. Jones and Sheets would make up the first two in the overall positions, but it would be Blayke Coler of the 125 B/C class work his way on adjusted time to the third overall position.

As the 8 a.m. youth race took off it would be Joseph Cunningham coming through in the first place position, working towards earning the youth overall national championship. Cunningham would keep pushing, trying to place a gap over fellow competitors, Brayden Nolette and Canon Kuneff. Nolette and Kuneff would try to apply the pressure up front, but would ultimately fall just short as Cunningham came through to the checkered flag first. Cunningham earned the Youth Overall National Championship, as Nolette took home second in the YXC1 Super Mini Sr. class and overall with Kuneff behind him in third.

In the YXC2 Super Mini Jr. class it was Grant Davis coming through the pack to earn his ninth win of the season. Davis currently sits first in the points standings as the series heads into the last two rounds. Jack Joy came through to take second in the YXC2 class followed by Garyson Smith clinching third and the last spot on the class podium.