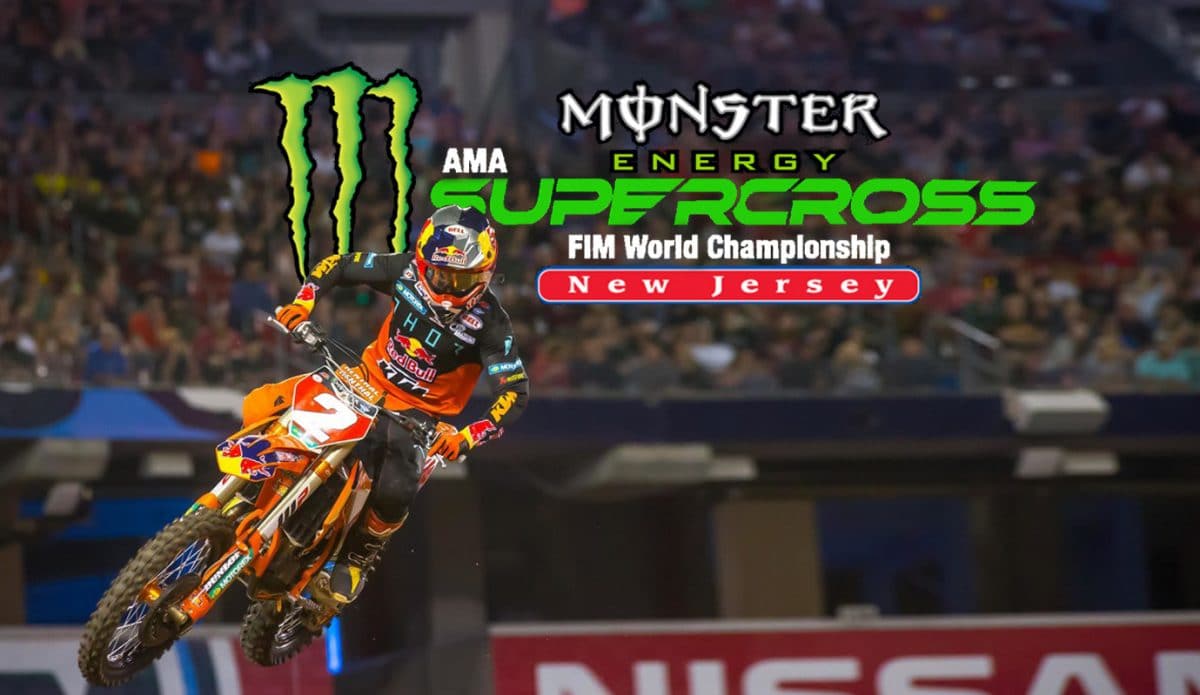 The 450 main event was a high-stakes cat-and-mouse game between Cooper Webb and Eli Tomac at the New Jersey round of the AMA Supercross series this weekend. It was round 16 of 17, with the title coming down to the final laps. The main event held one wild moment after another. It started off with Marvin Musquin going down hard on the first lap. Cooper Webb then found himself leading with championship rival Eli Tomac on his rear fender, riding aggressively. When Tomac challenged for the lead in the early laps, Webb backed down early, deciding to play it safe with his points lead. But when the opportunity presented itself, he couldn’t help but repass for the lead. Then it was game on with Tomac. He rode hard, making it back to the font, only to fall shortly afterward. He dropped back to fourth behind Webb, Zach Osborne and Blake Baggett. Then it was Osborne’s turn to take the lead. He pulled along side Webb in the whoops, and once again, Webb backed out. Osborne only led for a lap. He lost control and allowed Webb back into the lead. In the closing laps, it looked like Tomac was going to get back in the game. He passed Osborne and set his sights on Webb. Then he fell once more. In the end, Webb won and extended his lead to 23 points. Osborne finished a career best second place ahead of Tomac. After the race, it became apparent that Webb had been desperately sick all week. For extended coverage of the 2019 East Rutherford Supercross, click here.

450 HEAT ONE
The first heat presented  a surprising win for Rocky Mountain ATV/MC’s Justin Bogle in a race packed with talent. His teammate Blake Baggett was first into the first turn, but he pushed wide  and Eli Tomac slipped under. Bogle also got around Baggett with Justin Hill and Ken Roczen close behind.  A few laps from the end of the race, Tomac dropped his Kawasaki in a turn and Bogle took over the lead. He stayed in front, earning his second heat win of the year. Tomac was second ahead of Baggett, Hill and Roczen.

450 HEAT TWO
Zach Osborne pulled the holeshot with Marvin Musquin all over him. Joey Savatgy  and Justin Brayton were up front, too but Cooper Webb was around tenth on the first lap. Osborn not only held off Musquin but looked stronger in the middle of the race. Eventually, though, Musquin passed him. A lap after that, Savatgy went down, giving Brayton third. Not long afterward, Webb came up and took it away. On the very last lap, Webb earned one more position, passing Osborne for second. For Musquin, it was only his second heat win of the year.