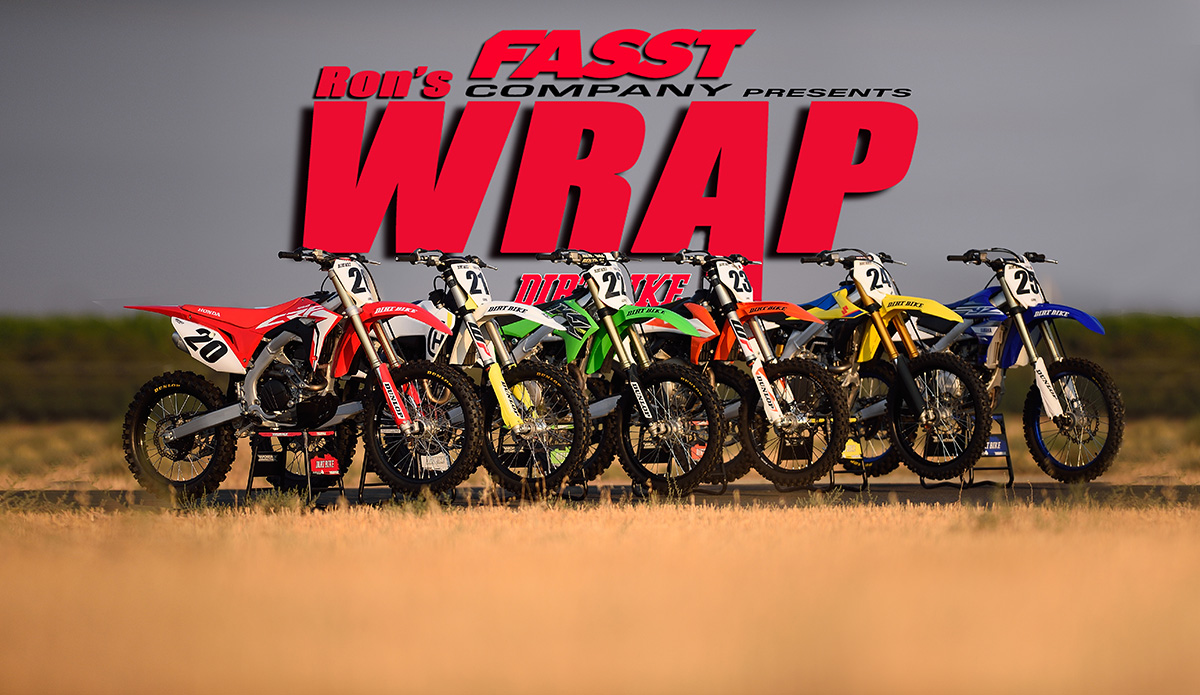 The 2019 450 shootout is underway right now with the Honda CRF450R, Husqvarna FC450, Kawasaki KX450, KTM 450SX-F, Suzuki RM-Z450 and Yamaha YZ450F. The first day kicked off in Porterville, California at the city’s municipal motocross track. That’s right, it’s an MX facility run by a city in the central valley of California. In an age where other government entities are creating laws to ban dirt bike recreation, Porterville is embracing them, and the staff there works incredibly hard to keep the track and the facility in good shape. You can check it out at the Friends of Kern Open Space website, which is the nonprofit that runs the track for the city. You can also go to the city of Porterville website or, for the most current track conditions, call (559) 782-7541.

The Honda CRF450R is developing a strong following among Pro riders. Its biggest attributes are its cornering and aggressive power. Its weakest point is that it’s a very busy, hyperactive handling that novices and intermediates find unnerving. The Honda is also somewhat heavy at 239 pound without fuel, as weighed on our scale.

The Husqvarna FC450 has a stiffer frame and a new head for 2019. All of the riders report that it’s even faster than last year’s model. The Husky’s biggest strength is that even with all that outrageous power, it’s still very smooth. The bike is also very light, at 223 pounds without fuel. Its weakest point is comfort. It’s a very rigid-feeling bike. The WP AER 48 fork is still good, but it’s not as big as asset as it once was, as the bar is higher than ever in the fork category.

There are very high expectations for the new Kawasaki KX450. Its strongest point is handling. The KX feels like a big 250F, and it weighs less than the other Japanese 450s (233 pounds without fuel). We also love the hydraulic clutch and the stronger front brake. The weak point is that the bike gives away a little power to most of the other 450s, particularly on the bottom.

KTM won last year’s 450 shootout, and it gained power for 2019. The bike is almost the same as the Husky, but has a little more power in the middle, and a more comfortable feel overall. It’s also louder than the Husky. The bike is still incredible, but the suspension isn’t as plush as some of the other bikes. It is the lightest at 222 lb.

Last year’s Suzuki RM-Z450 has a new look and a new chassis. It also got a complete change in suspension. This year, the rear shock is softer, but otherwise it’s unchanged. Its strength is its smooth nature and good handling. Its weak points are its weight (240 pounds without fuel) and the fact that it’s the only bike without electric start.

Yamaha didn’t make many changes to the 2019 YZ450F, but our test riders (most of whom were involved with the 450 shootout last year), generally rated it higher this time around. It has the best overall power delivery of all the 450s. The YZ also has the best suspension. This is still a very big-feeling bike, and some riders just couldn’t come to terms with its odd ergos; i.e. low seat and high bars. In the coming week, the bikes will be ridden at Milestone, Glen Helen and Cahuilla, then they will visit the FMF dyno. The full test will appear in the November, 2019 print edition of Dirt Bike.

The Kalk, or “Cake” is an electric dirt bike from Sweden with a similar mission to the KTM Freeride. It’s not a motocrosser or a racer, but it’s made to handle trail riding and do it in a very quiet manner. It has a range of one or to hours, depending on which of the three power settings you use. It can be charged back up to 80 percent of full capacity in an hour and a half on a standard 110v outlet. The importer is in Glendale, California, and you can drop him an email at [email protected]

The 2019 250 National Championship might be wrapped up tomorrow! The 450 class is still too close to call. Here’s the historical package for the second-to-last (“penultimate” for you English majors) round of the series.