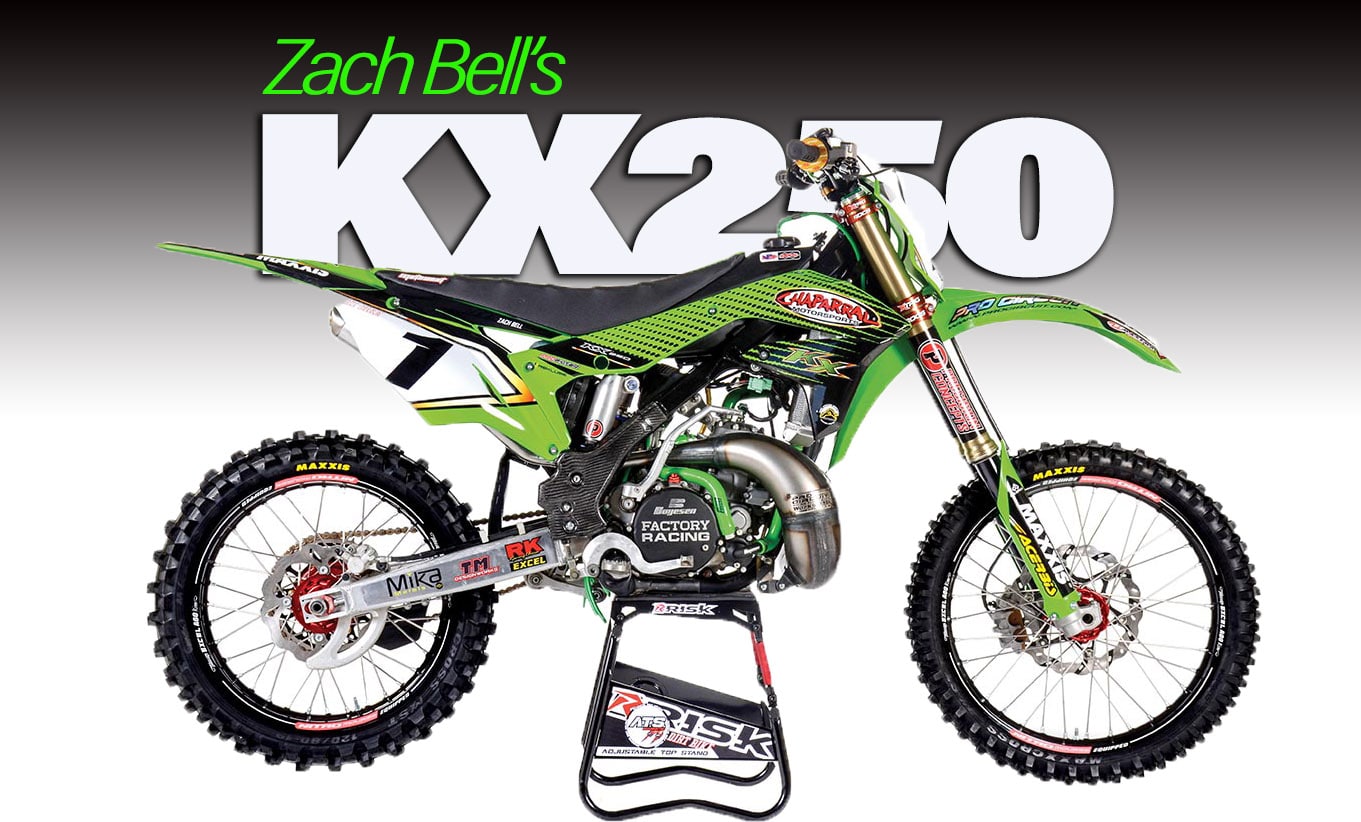 They say that winning a championship is much easier than defending one. That’s clearly been the case with Zach Bell and the Wiseco World Two-Stroke Championship. His 2018 title has proven very difficult to duplicate. After a DNF last year, we hoped we could team up with him to capture the 2020 title.  Unfortunately, a broken collarbone killed his chances of even showing up. But he had a bike–man did he have a bike!

PROJECT ONE
Last year was our first attempt at building a bike. As a base, Justin Seeds was kind enough to lend us his 2003 KX250. For starters, it wasn’t a 250cc engine, as Justin had previously had L.A. Sleeve bore the cylinder out to 270cc. We thought the 270cc engine was a solid base, and we didn’t have a ton of time to put into the build, as the race was in about a month. So, with the time crunch, we didn’t give too much attention to the powerplant. Most of our work went into modernizing the bike as much as we could.

We started with the front end, mating a pair of Xtrig triple clamps to the bike so we would be able to use the KX450 Showa forks, along with the modern front-brake system and wheel. That all bolted on with ease, so we decided to update the rear of the bike. Jon Primo at Pro Circuit was building 2019 conversion kits, complete with machined parts, that would allow us to affix a 2019 KX250 subframe, fuel tank, airbox and plastics to the two-stroke. We thought it was a cool idea, so we got the kit and went to work modernizing the rear end of the bike.

This was where things began to get a little complicated. As we were using the kit to install the 2019 KX250 parts, our progress kept stalling. We didn’t realize there were a few parts we needed to order on our own—the gaskets that seal the airbox, in particular. Though these setbacks were simple to overcome, they were a little frustrating because they ate into our testing time. Additionally, because the conversion kit was privately offered, there were no detailed installation instructions. So, our lead mechanic, Phil Valdez, ended up using the guess-and-check method at times when installing certain pieces. He also had to do some minor modifications to get some of the parts to fit as well as we wanted.

When we finally finished installing the conversion kit, it did look cool; however, it was only a week or so until the race, so we didn’t have much time to really test the bike. In fact, the first time Zach rode the bike was the weekend of the race in Friday’s practice. That’s when we learned that the engine wasn’t going to be quite as competitive as we’d hoped. The power delivery of the 270 was quite a bit different from that of the 250. And although it made plenty of power, it wasn’t as snappy and quick to rev. With our lack of testing, we dialed in the jetting as best we could to try to improve it, but that was about all we had time for.

When it came to racing, Zach showed his class in the first moto. He was shuffled back to around 10th on the first lap and worked his way up to third late in the moto, passing some well-known names in the process. Unfortunately, his effort ended abruptly, as there was enough tension on the air boot from the conversion kit to pull the boot off of the carburetor. The bike instantly died, and we hung our heads.

PROJECT TWO
Fast-forward less than a year, and I had a couple of goals for our second go at building the two-stroke. Goal one: I wanted to get a newer model. As far as a base for the build, the 2003 wasn’t the best year that Kawasaki had to offer. Fortunately, Scott Perkins was very quick to offer his 2007 KX250 for our effort. With a bike secured, goal two was to focus purely on performance and function rather than flair. In the pre-COVID race schedule, we’d given ourselves more time for the build than in 2019. So, the first thing we did was pull the engine out and split the cases.

Once the cases were split, the cylinder was sent to Pro Circuit to get cleaned up and ported. We then sent all of the engine parts to CryoHeat. There, CryoHeat not only put the parts through their proprietary metal-strengthening process, they also vapor-blasted the pieces, giving them a beautiful, brand-new look. With the engine dialed, we turned to the suspension.

For the build in 2019, we used the Showa 49mm fork, but since then, the 2020 KX250 had updated to a 48mm (dual-function) Kayaba fork. We used the Kayaba this time around for slightly better compliancy on the lighter two-stroke. The forks and shock were re-valved for Zach at Precision Concepts to dial in handling of the bike, and the forks were again affixed to an Xtrig triple clamp, which modernized the front end, and not only looked cool but worked quite well, especially when accompanied by the Mika handlebars, ARC Memlon levers and clutch perch, and A’ME, half-waffle grips.

We kept things pretty simple from there, using products from our team sponsors to improve performance, such as the Pro Circuit pipe and silencer, Boyesen RAD valve, and updating to Kite wheels, an RK chain, Mika sprockets and a TM Designworks slider and guide. Of course, we used some parts to add a little flair, too, like Ride Engineering accents and the MotoHose radiator hose kit. The look of the bike was completed by the RAD custom graphics kit, while StompGrip IMS CORE footpegs and a Moto Seat cover added grip and traction to Zach’s contact points.

Unfortunately, we haven’t been able to race the bike to see what it’s really capable of; however, in testing, the 2020 build has proven to be an improvement over the 2019 attempt. On the track, the engine feels snappy, sounds amazing and pulls hard. The handling is improved as well with the updated fork and suspension settings. Plus, by keeping things simple and not going overboard updating the look of the bike, we’ve lessened the likelihood of any issues cropping up during the race like in 2019.

Hopefully, we’ll get to watch Zach getting the full potential out of the new build during a race at some point. Until then, we’ll take a few of the values we learned from these two builds and keep them in mind for the next one—function before flair, and simpler is usually better.