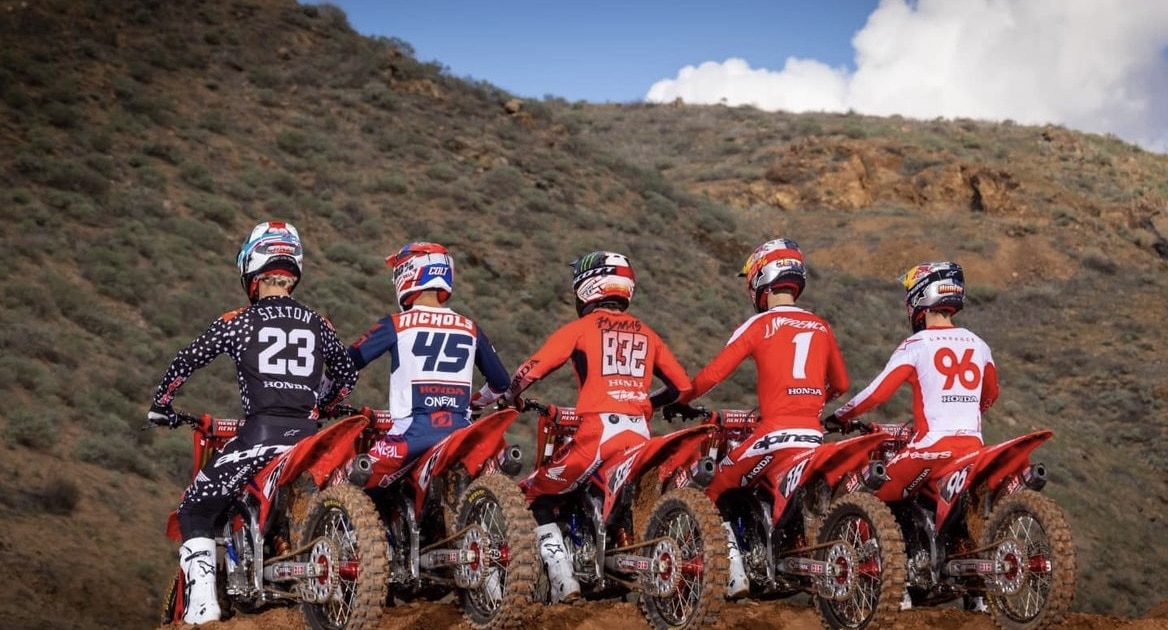 During a special event held today at Southern California’s Blackmore Ranch, ahead of the 50th anniversary in motocross for American Honda, the team approaches the ’23 AMA Supercross season with a powerful rider lineup comprising Chase Sexton, Colt Nichols, and Hunter and Jett Lawrence, along with Chance Hymas.

The squad’s 450 effort will be led by Chase Sexton, who embarks on his third AMA Supercross season aboard the factory CRF450RWE. A two-time AMA Supercross 250SX East Region Champion, the Illinois native, took a big step forward this past season, regularly posting podium results indoors, finishing a close second in the AMA Pro Motocross final standings, and riding for the winning Team USA effort in his Motocross of Nations debut. As previously announced, Sexton is joined for the 2023 indoor series by 2021 AMA Supercross 250SX East Region Champion Colt Nichols, who moves to Honda and the premier class after a successful career aboard quarter-liter machinery.

For the third year in a row, Team Honda HRC’s 250 effort is headed up by Australian brothers Hunter and Jett Lawrence, both campaigning the CRF250R. This past season saw Jett successfully defend his AMA Pro Motocross 250 title and earn the AMA Supercross 250SX East Region crown. At the same time, Hunter was second in the West Region and third outdoors. For 2023, the brothers are swapping supercross regions, with Jett riding West and Hunter racing East. Meanwhile, Chance Hymas advances from the amateur ranks to join Hunter in selected East Region appearances.

In addition to his 250 efforts, Jett intends to switch to the CRF450RWE full-time for AMA Pro Motocross. At that point, Hymas will fill his 250 spots full-time alongside Hunter Lawrence.

Following a successful debut year as Team Manager, Lars Lindstrom continues at the helm for 2023, again joined by 450 and 250 Crew Chiefs Shane Drew and Grant Hutcheson, respectively. Brandon Zimmerman is Sexton’s mechanic, while Nichols’ technician is Jordan Troxell. Christien Ducharme and Cameron Camera continue as mechanics for Jett and Hunter Lawrence, and Thomas Harris is spinning wrenches for Hymas.

“The 2023 season will mark 50 years of motocross for American Honda, and we’re excited to get started,” said Brandon Wilson, Manager of Sports & Experiential at American Honda. “We experienced good success in 2022, including indoor and outdoor championships in the 250 class, but we’re hungry for more. We’ve got a great lineup of riders aboard competitive machinery and talented crew and management behind them. Honda has compiled an impressive motocross and supercross heritage over the past half-century, but we’re focused on adding to it as we head into the next 50 years.”

The 2023 season features a new format, with the 17-round AMA Supercross series commencing January 7 in Anaheim, California; the 11-round AMA Pro Motocross series kicking off May 27 in Pala, California; and the new three-round SuperMotocross World Championship starting September 9 in a yet-to-be-announced location.