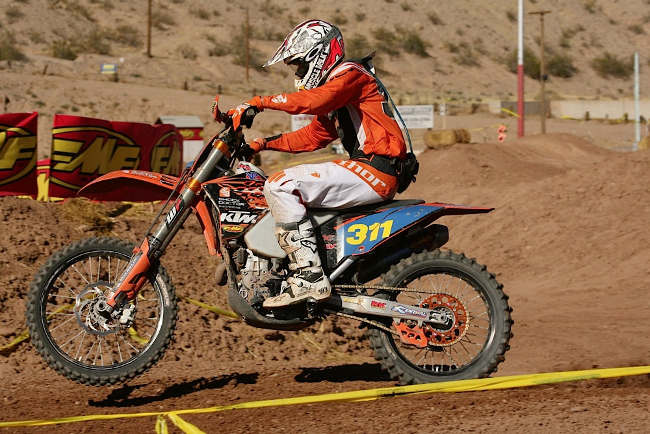 “We tested quite a bit on Saturday and had a really good set up going into the race on Sunday,” commented Brown’s mechanic Andrew Langston. “We gauged Mike’s speed based on last year’s winner and felt very confident heading to the line Sunday afternoon.”

Brown chose a far outside gate pick for the start of the race. “The gate did not drop within the first five seconds and that caught a lot of people off-guard when they held the gate longer,” stated Brown whose reaction time off the start put him in 10th around the first corner. Dietrich also suffered from the long gate drop and got caught in the gate causing him to start in the tail end of the pack. Brown’s Shock Doctor/KTM teammate Justin Soulè had a great start rounding the first turn within the top five.

While Soulè stayed out front quickly moving into the top three, Brown had moved up from 10th to 8th position by the end of the first lap while Brown’s competitor for the title, Dietrich, sat in 14th. “I was riding really tight the first couple laps,” said Brown. “I know with sand courses like this one, you can sometimes hurt the bike when you push it to its limits. I think with the championship on the line, I was almost being too cautious.” Around the third lap, the 6th and 7th place riders pitted and allowed Brown to move into 6th place with Dietrich closing in. Dietrich managed to get around Brown after the pit dropping Brown to 7th place. A few corners later Brown hit a branch, injuring his nose and causing him to lose one more position. It was at this point that Brown saw the championship slipping and turned on the gas and began to charge forward.

“Mike took 20 seconds off his lap times on the last few laps. You could tell he was not playing it safe anymore and he was determined to charge through the pack and win the championship,” commented Langston. Meanwhile, Dietrich had encountered a problem of his own and Brown passed by him while Dietrich was recovering from a crash. Brown went on to pick off a few more positions and eventually climbed to 5th place at the race end, securing his first WORCS Championship. Soulè also ended his season on a strong result finishing in 4th position and securing 3rd overall in the series.

“I am proud of both Shock Doctor/KTM riders today. A championship and a 3rd overall in the series are great results for the Shock Doctor/KTM team. Everyone worked really hard to get a strong finish at the end of the season and we hope to return next year and finish the same way,” stated Shock Doctor/KTM Team Manager Antti Kallonen.