Jonny Walker: “I’ve won Red Bull 111 Megawatt for the last three years, but now more than ever is the most important time to win this race. With it being a part of WESS, a championship I’m leading, I can’t settle for anything less. We’re just beginning the second half of the series too and although I top the standings my advantage isn’t that much. I really need a win here to build a bigger points advantage for the rest of the races to come.”

Walker was well on his way to doing just that. With a second place start in the three lap main event Walker made a pass for the lead on his teammate Nathan Watson after the Endurocross section as they entered the quarry . Headed into the mine section for lap two Walker would go down hard in the dust requiring him to withdraw from the competition and seek medical attention . We do not know the extent of Walkers injuries yet but the image below was posted on his Instagram. He looks to have some intense road rash on his upper body and bandages on his wrists but is giving the camera a thumbs up. 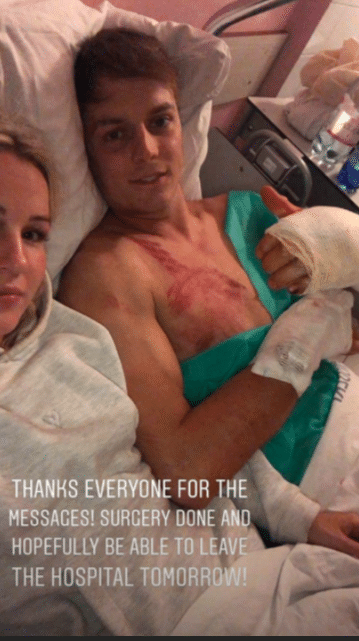 Heal up Jonny hope to see you back soon!