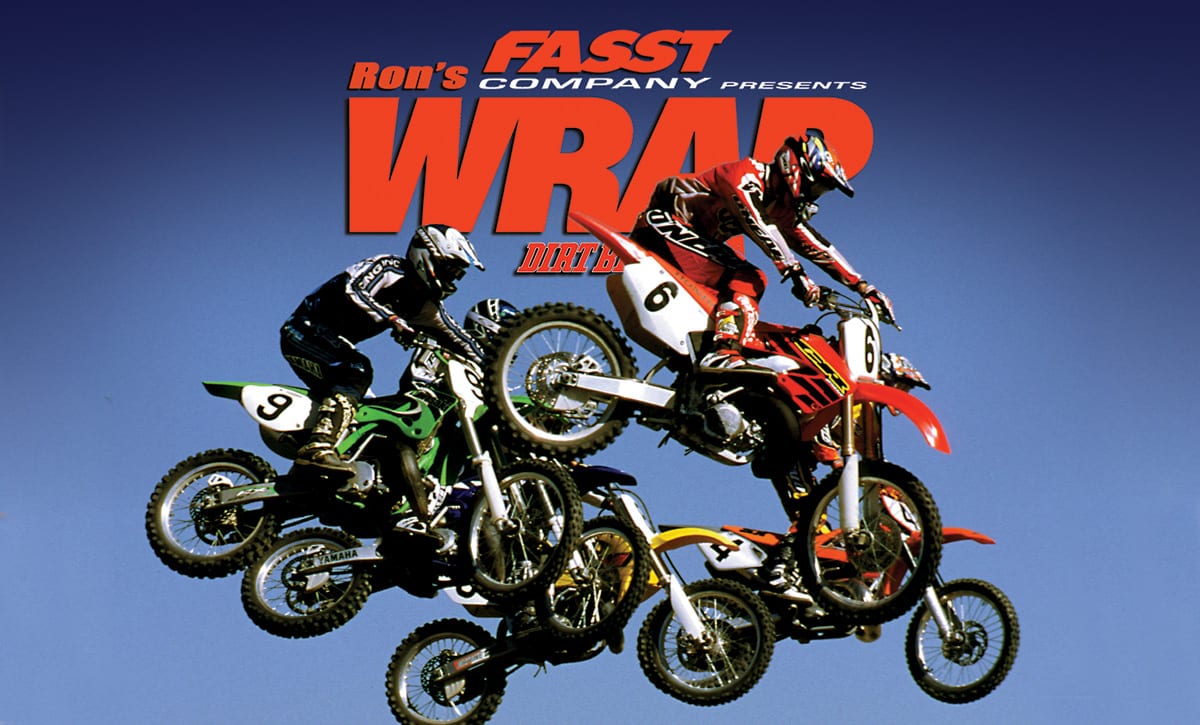 Going into the year 2000, we kinda thought the world might end. Everything was changing; a four-stroke had just won the National championship the previous year. Who saw that coming? The 250 shootout for the year 2000 took place in late 1999 and appeared in the January, 2000 issue of Dirt Bike.   The Japanese makers were still all-in for two-stroke development at the time, and all four would go though at least one major redesign before turning their attention away. Honda redesigned its 250 two-stroke in 2002, Kawasaki  in 2003, Suzuki in 2001 and Yamaha did it in 2002 and then again in 2005. KTM, of course, has paid nonstop attention to the 250SX. Here is the introduction and the conclusion to the 250 two-stroke shootout for the first year of the new millennia. 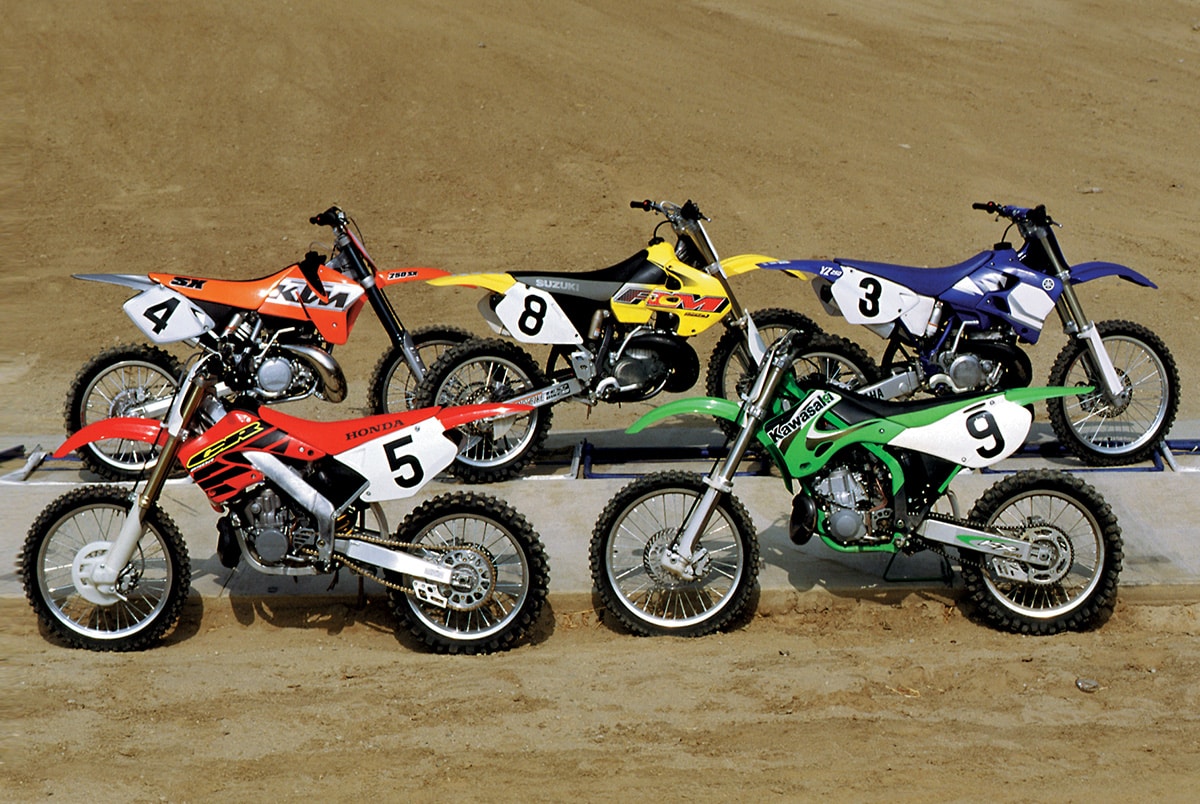 You don’t want to hear about it, but we suffered. We had the five greatest production 250cc motocrossers of All-Time-To-This-Point and our mission was to ride until we didn’t like four of them. We had to select a winner among five bikes that were better than most of our test riders. We had the Honda CR250 with its kinder, gentler personality. We had the Kawasaki KX250 with a motor that has conquered kingdoms. We had the KTM 250SX with its new powerplant. We had the Suzuki RM250 with its Albertyn/DeCoster influence. We had the Yamaha YZ250, which was a further refinement of an all-new 1999 model. Do you want to see a test rider sweat? Ask him that simple question: “Which one is best?” He’ll reply with 15 minutes of hedging, weaseling and incoherent nonsense.

But even among bikes this good, there is a best and a worst. There are flaws that appear after enough premix has run through the tanks, after enough conditions have been dealt with, after enough tracks had been used. In the course of our test, we visited Glen Helen, Lake Elsinore, Sunrise Cycle Park and Dirt Bike’s own Secret High Desert Test Facility. Eventually the truth came out. So here they are, the best bikes that 2000 years of civilization has produced. Consider it a starting point for the new millennium; ground Zero Zero.

1. YAMAHA YZ250.
It was neck and neck between the Honda and the Yamaha. Most of our test riders actually preferred the CR. But then most of our test riders are way too fast and were simply swayed by the CR’s stiff suspension. During the last week of testing, we upgraded the YZs spring rates, and presto! Instant Pro bike. It’s rare that a bike this smooth and easy to ride can actually get down and boogie with the fast boys.

2. HONDA CR250R.
Yes, the Honda came within a hair of winning. Considering that only Pros could deal with the ’99 version, the CR is the most improved bike of the year. The new frame is kinder and gentler; now Honda needs to give the motor the same treatment.

3. SUZUKI RM250.
The RM is a bike of extremes. It’s usually the best or the worst. With such great cornering ability, awesome throttle response, great mid-range power, and with the makings of great suspension, the RM isn’t far from the mark. It just needs a lesson in manners from the YZ.

4. KAWASAKI KX250.
Two things knocked the KX from its lofty perch. First was the overly soft rear suspension. That can be easily fixed. Second was the fact that it feels like a big, huge truck of a bike. That’s something you have to learn to live with. It’s worth it, though, to have that awesome motor.

5. KTM 250SX.
This year might be a slight step back for KTM. The new engine has good throttle response, but just isn’t as fast as the ’99 version. We know that the old cylinder had reached the end of its evolutionary path, and that the new version has enormous unrealized potential. Same goes for the suspension. There’s a great bike lurking within the 250SX. 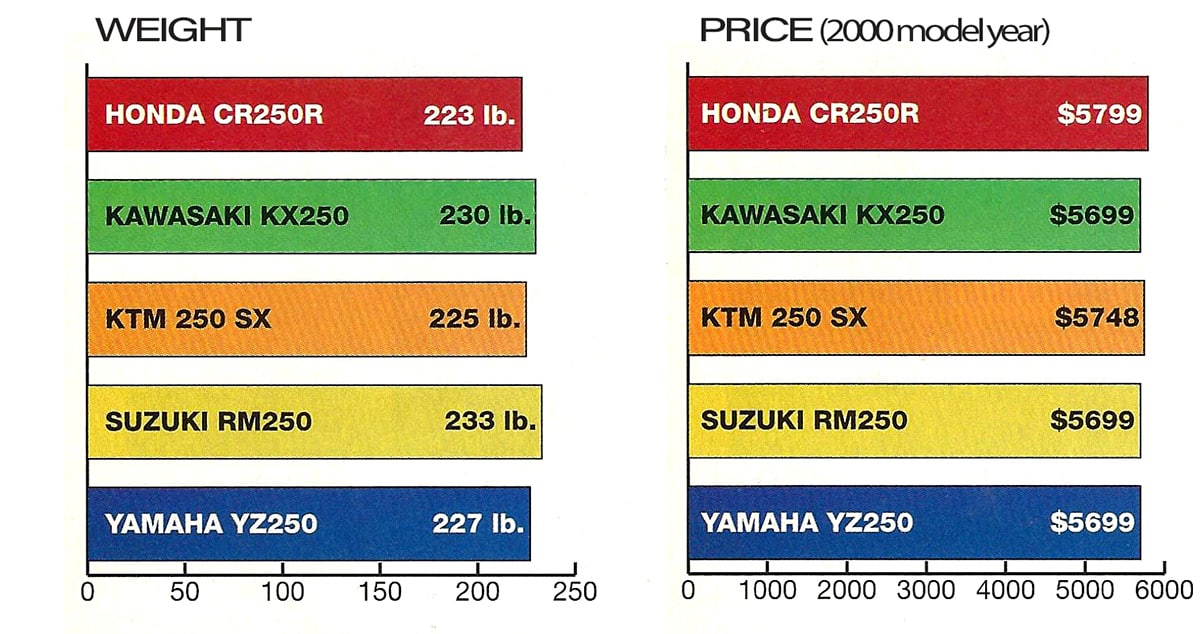 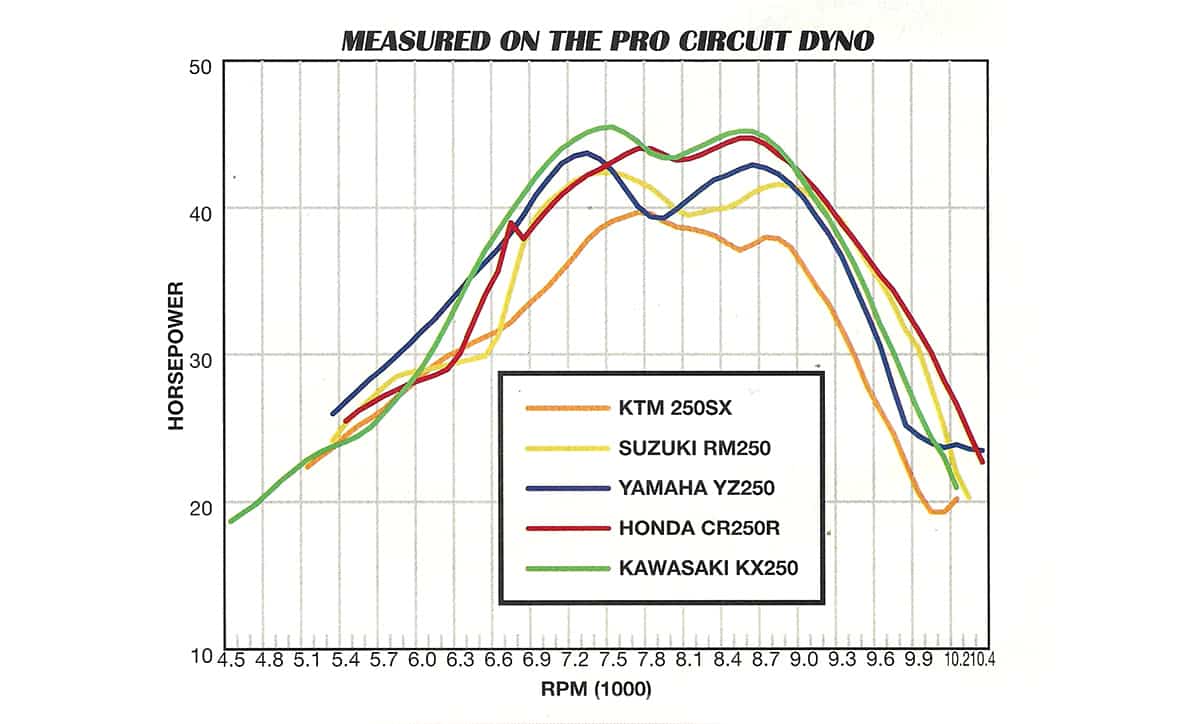