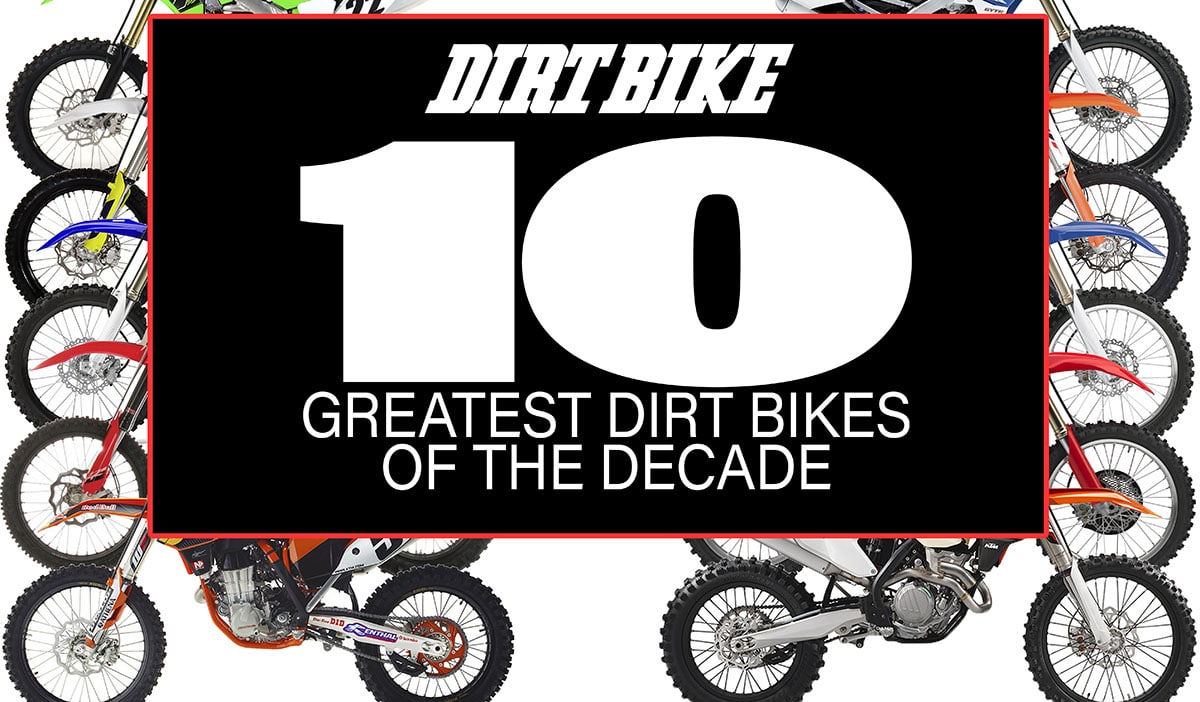 The last decade  brought a period of rapid improvement in dirt-bike design.  We’ve seen technology like electric start and fuel injection go mainstream, four-strokes become lighter and dual-sports break new ground. In general, the bikes of today have improved across the board compared to those of 10 years ago. This is a collection of the greatest bikes that we have tested at Dirt Bike Magazine from 2010 to 2019. Some of the bikes made the list because they were milestones showing the path forward. Others are here because they are good enough to hold their own against current machines.

This was the Dungey Replica that helped elevate KTM to a higher level in pro motocross. It was a special edition that was a preview of the 2013 model, and was a vast improvement over the standard 2012 450SX-F. It was a fuel-injected single overhead cam motor that was more or less based on the 450XC-W off-road bike that was released a few months earlier. This might be the only case where an off-road bike got new technology before the motocross version. The bike was light and fast, although the suspension was still criticized widely.

When Yamaha decided to get back into the game in the 250 class, the result was amazing. The 2014 YZ250F got a reverse cylinder head, fuel-injection and a chassis redesign, all of which had been introduced on the 450 a few years earlier. On the 250, these features had much greater initial success and made Yamaha a major force in pro motocross once more as well as the bike to have on the sportsman level.

Beta started turning heads back in 2007 when it first started selling four-strokes with KTM motors. The first of the Beta-made four-stroke motors had excellent performance, but it wasn’t until they got fuel-injection that they really arrived. The first of these was the 350RR-S dual-sport in 2015. The 390, 430 and 500 got updated one year later. Beta continues to enjoy looser regulation and therefore a little more performance than other dual-sport bikes because of its status as a small manufacturer.

The Yamaha YZ125 could have been on the Greatest Bikes list in the previous decade. The fact that it has survived all this time with only minimal change is a testimony to its stature. In the right conditions, it’s still the best-handling motocross bike ever built. In 2014, it got a facelift and some suspension updates that was good enough to keep it relevant for another 10 years, at least. 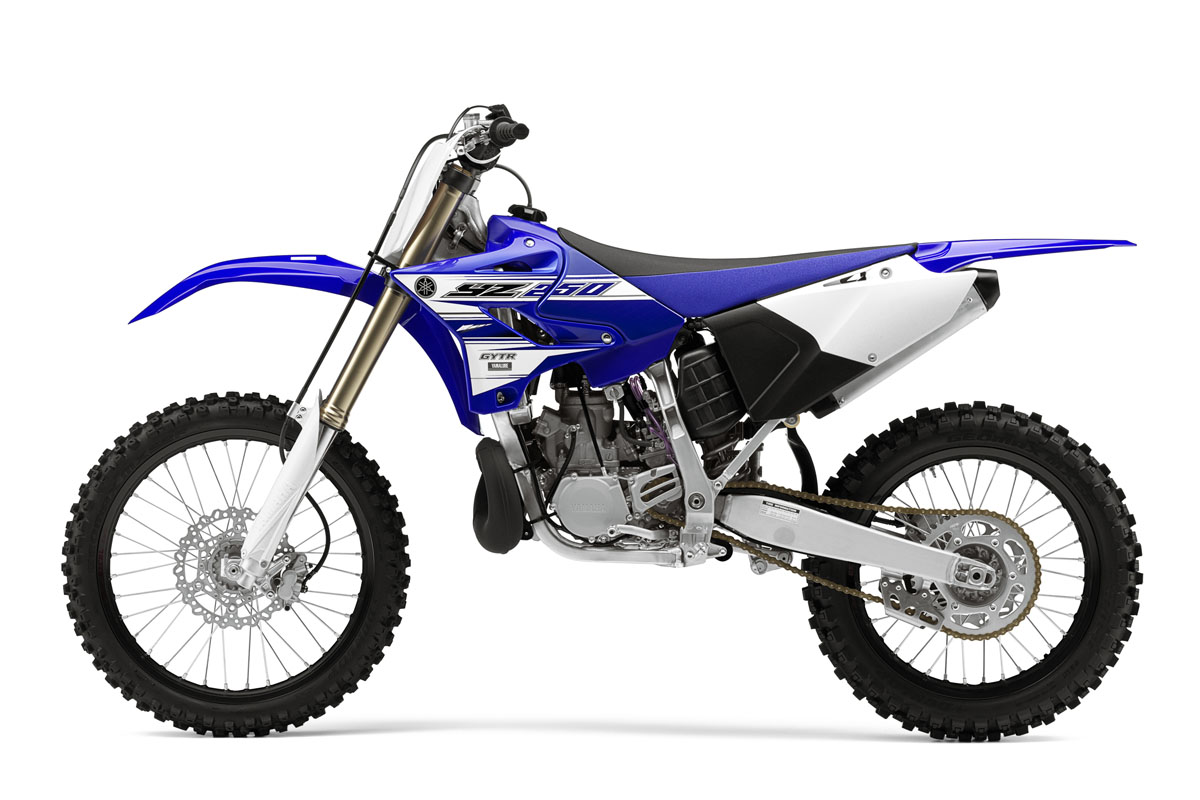 Obviously, enthusiasts still have a voice within Yamaha. The continuing availability of the YZ250 two-stroke proves it. There are faster two-strokes, but the YZ’s suspension and handling are still on top. Like the YZ125, it was updated in 2015. The popularity of the YZ250 was strong enough to justify the production of an off-road version in 2016.

The first year for the 350SX-F motocross bike was 2011, and even though it was a sales success, the mid-size platform didn’t really show its potential until its first major redesign in 2016. Then it dramatically improved. The XC off-road version was really where it shined. It was essentially the same bike, but with a six-speed gearbox and off-road set up. As an off-road bike, the suspension and power were perfect, and it soon became a favorite for KTM’s factory racers in everything from GNCC to EnduroCross.

The KTM 300 two-stroke has been the most highly regarded off-road bike in the U.S. for almost 20 years. In 2017, it reached its highest level. The motor was redesigned with a counterbalancer and an electric start motor integrated within the centercases. The Husqvarna TE300 got the same updates, but most off-road purests still prefer the KTM’s PDS suspension. TPI fuel-injection came to this model in late 2018, but it has yet to demonstrate clear superiority over the Mikuni carb that was introduced in 2017. Many riders actually install the Keihin carb from earlier models, saying that’s the ultimate set-up.

By 2017, Honda was in danger of becoming irrelevant with a collection of dated designs and underperforming models. That all changed with a complete remake of the CRF450R. Honda engineers rethought the layout of the bike and came up with a design that would become the platform for the CR450X off-road bike and CRF450L dual-sport. The Honda motocross bike didn’t win the shootout that year because of s narrow pro focus. But that’s probably what Honda had in mind all along and doesn’t detract from the bike’s status as a true milestone.

These bikes earned a place on the list to commemorate the fact that good engineering always triumphs. Government regulations both in the U.S. and in Europe hit dual-sport bikes particularly hard in the last 10 years, and KTM/Husqvarna chose to deal with it head-on. The resulting bikes pass all the most severe noise and emission regulations legitimately without cheating. The Husqvarna FE501, FE450, FE350, FE250, along with the KTM 500EXC, 450 Six Days and 350EXC and 250EXC all are excellent off-road bikes that just happen to be street legal.

Finally, Japan woke up. The 2019 KX450 is proof that Kawasaki wasn’t content to sit back and let the balance of power shift to Europe. From the engine design and the hydraulic clutch to the emphasis on suspension and weight, Kawasaki is fighting back. It’s about time.

GONE BUT WORTH REMEMBERING

We can’t say goodbye to one of the most successful and iconic motorcycles of all time without acknowledgement. The Honda CRF450X is the all-time Baja champion and came from a line of bikes that started in 2002 and included the legendary 2008 CRF450R. This isn’t to discredit the current version of the same model, but rather to pay tribute to the passing of true greatness.

The Kawasaki KLR650 had one of the longest production runs ever, but finally fell victim  to emission regulations. In its final years, the KLR was the best value on two wheels and came to represent a whole class of budget adventure bikes. We still have hope that it might someday return with fuel injection.