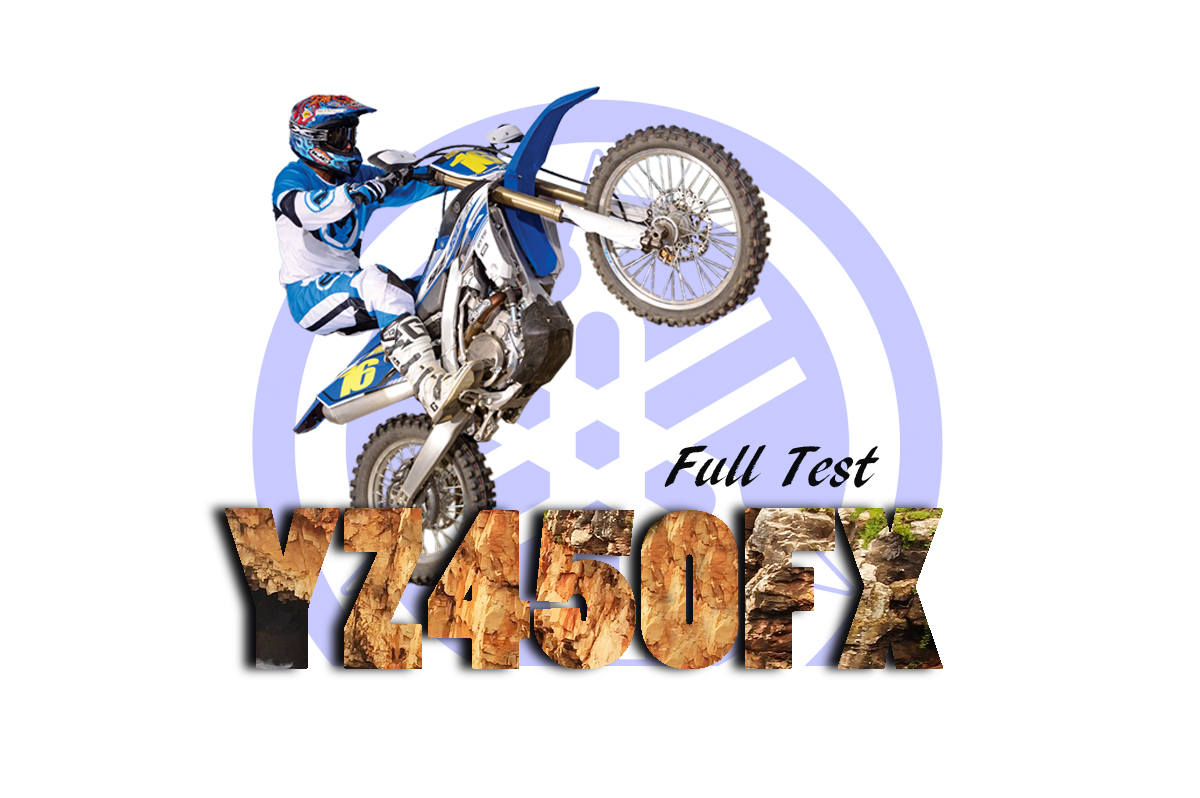 We didn’t believe it would ever happen. The 2016 Yamaha YZ450FX is a bike that everyone said was impossible. An off-road race bike from Japan? Such things were supposed to be out of the question—until last year. When Yamaha released the 2015 YZ250FX, it stunned everyone. Once the bureaucratic barn doors were left open, it was only a matter of time before the 450 arrived.
To most of us, it seems like no big deal. You take a 450 motocross bike, tweak it for off-road use and voila! You have just made off-road guys across America happy. KTM does it all the time. But, it’s not so easy for Japan, where big corporations have been bitten time and time again for offending American agencies like the EPA, the CPSC and CARB. Thus, bikes like the WR450F were designed to please everyone, and if you wanted to race, you could modify one on your own.
After a decade of such conservative product planning, the more enthusiast-oriented elements at Yamaha Motor Corp. USA decided it was time for Yamaha to design a bike for cross-country racing with no compromises to appease government agencies, meaning no emission equipment and sound-output levels similar to those of the motocross bikes. It’s a new game.

A BIKE FOR THE FAITHFUL
From a mechanical point of view, the bike is very similar to the YZ450F motocross bike. But, there are about a dozen very important differences. The biggest is the addition of the electric starter. To add electric start, Yamaha had to redesign the left engine case, add a battery and beef up the generator. The generator output is now 160 watts as opposed to the YZ’s 95 watts. Along with that comes an increase in flywheel inertia and a whole new crankshaft. Yamaha redesigned the motor so that 100 percent of the reciprocating weight is now balanced by the counterbalancer; on the motocross bike, it’s 88 percent.
The next big difference between the MX and the FX is the gearbox. The new bike still has a five-speed, but it has a 30-percent-wider range. Second gear on the FX bike is pretty close to first on the MX bike. On top, the FX has a taller fifth. You would have to reduce the rear sprocket by four teeth on the MX bike to get the same result in top speed.
Yamaha completely redesigned the clutch to take the heat and abuse of off-road riding and redesigned the radiators and shrouds as well. As far as the parts of the motor that make the power, though, Yamaha left the YZ stuff in place. It uses the same head and piston and has only slight differences in the cams to work with the electric starter. Obviously, the motor uses the YZ concept of a rearward-slanting cylinder with the exhaust in the rear and the intake in front. This was originally done to intensely centralize the mass of the motorcycle around the center of gravity, but now it has become sort of a Yamaha calling card. The only real differences between the tuning of the FX motor and the MX motor are electronic. The ECU is completely different, and the mapping of the fuel injection and spark advance are tailored to make the off-road bike smoother off the bottom.
In the chassis department, the FX has all the features that you would expect from an off-road bike—the same types of things that riders have been doing on their own for years. The suspension is softer, and there’s a kickstand and an 18-inch rear wheel. Yamaha made a provision for a radiator fan (the same one that will come on the WR450F as standard equipment). A skid plate also comes standard. Yamaha didn’t provide the bike with handguards or a larger fuel tank, leaving those items to the aftermarket. It’s worth pointing out, though, that the YZ450F has a larger fuel tank than any other 450 MX bike. 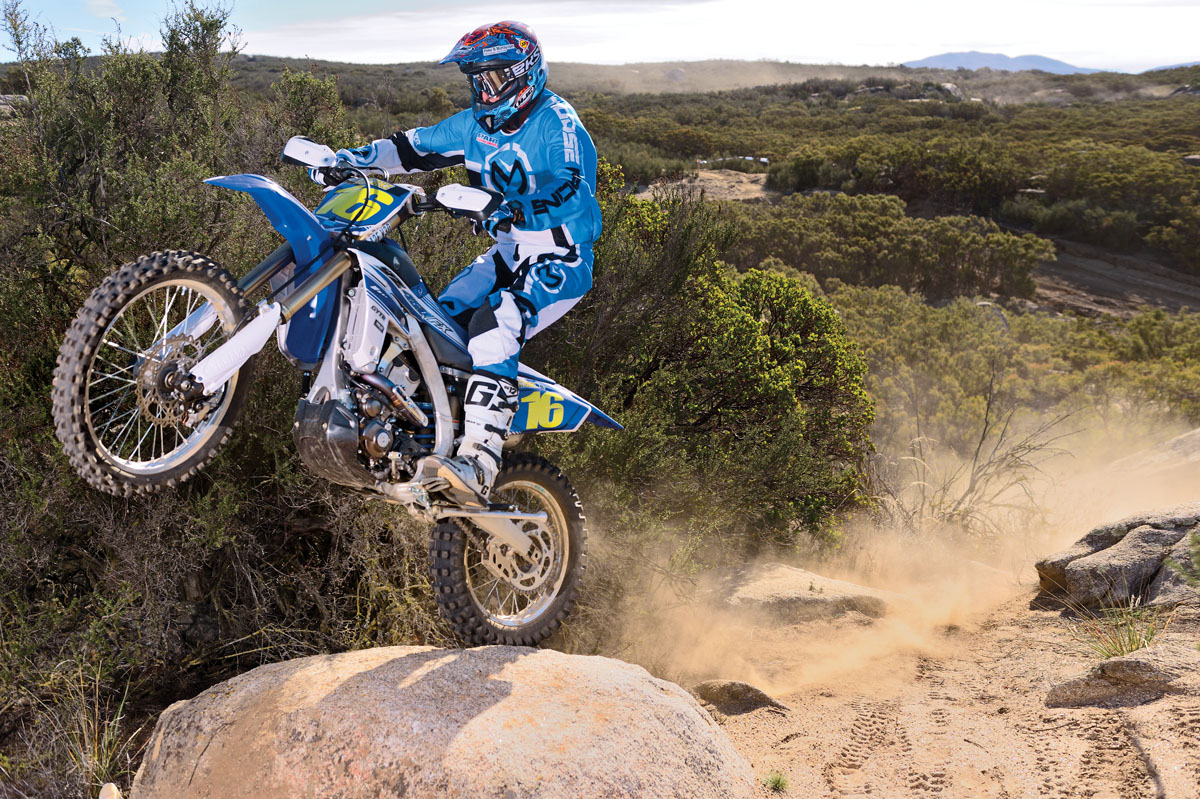 TRAIL RACER
If you’re expecting a YZ with a button, you’ll be surprised at how different the FX feels. It has its own personality. The MX version is great on the track but not very good on the trail. It has a ton of power, even by the standards of the 450 MX class, but that isn’t the real problem. It’s a very lurchy bike. When you chop the throttle, it’s like throwing out an anchor; and when you gas it, the power delivery is very abrupt. The FX has better manners. You can roll the throttle on more gradually and meter out power as you need it. The bike can be ridden slowly. It has a little less engine braking, and that low first gear makes all the difference in the world. If you do the math, you would have to add 14 teeth to the rear sprocket of the YZ to come up with the same overall ratio that the FX has in first.
But, you still need to keep in mind that this is a 450cc race bike. You could race motocross on the FX and pull just as many holeshots as you would on a YZ450F. It tapers off earlier on top than the MX version because of the difference in mapping, but it makes so much power by then that most riders would never even notice. As a result, even the FX is a handful on tight trails. Quite simply, it has more power than anyone really needs. Even if climbing gigantic, vertical hills is what you love most, the FX is overkill. You’re much more likely to loft the front end and steer into the weeds than actually run out of power.
Grant Baylor finished second overall in the GNCC XC1 Pro class on a modified YZ450F that inspired this bike. For the record, Grant is an amazing rider. He can twist it hard and come out smiling. For most of us, riding the FX on tight trails is an exercise in restraint. You can ride it all day long below 4000 rpm and go very fast. Horsepower, unfortunately, is fun. You can’t resist getting frisky with the FX, even though you know it’s not always the smartest thing to do. If you get cocky and think you can use full throttle, you’ll have a hard time staying on course.

MASS TIMES FORCE
Aside from being really, really powerful, the Yamaha is a big boy. With the electric starter, battery, generator and all that, it comes in at 253 pounds without fuel, which is 14 pounds heavier than the motocross version. And if you remember, the YZ450F was never accused of being especially nimble. The one thing that makes the FX’s mass manageable is incredibly good suspension. The fork, in particular, is right on target for off-road riding. So, despite the weight and despite the power, you have a very forgiving overall package. It’s very easy on your arms, even in rough terrain. The clutch pull is also very light, and the brakes are surprisingly powerful. So when you factor in all those things, the Yamaha is a gentle brute that you can ride hard and long without wearing yourself down.
We expected the suspension to be stunning from our experience with the 250 version. As it turned out, the YZ250FX was incredibly versatile. It worked on trails and it worked on motocross tracks for most riders. The 450’s suspension can’t cover as broad a range because it has a much tougher job to do. Power and weight are not friends of suspension, but the 450FX still does a good job of covering all bases. If you plan to race motocross or even ride WORCS events, you might need to stiffen it up. If you ride desert or some of the rougher cross-country events, it’s pretty much on target.

HOMEWORK
Yamaha did 90 percent of the job, but a dedicated off-road rider still has to add finishing touches to the YZ450FX. It needs handguards and perhaps a bigger fuel tank. The fact that the gas cap is under the front of the seat has always made quick refueling stops a little challenging for Yamaha off-road racers. Aftermarket tanks with Dry Break adapters generally do away with the part of the seat that covers the filler, which is a little uncomfortable. Quick air-filter changes are pretty easy. Besides that, the filter stays much cleaner in its location up high and forward. The FX doesn’t have a spark arrestor and isn’t especially quiet. For some riders in some areas, that’s a very big limitation, but at least it’s easy to fix with aftermarket help. And on the subject of modifications, it’s fun to try different fuel maps and ignition curves with the help of the Yamaha Power Tuner, which is one of the easiest EFI tuning tools on the market.
The YZ450FX will sell for $8890, which is about $300 more than the motocross version and $1100 less than the KTM 450XC-F. That, of course, leads to the ultimate question for the FX. How will it compare to the KTM? We’ll have that answer very soon. o
F-XCELLENT
• Smooth power
• Lots of power
• Great suspension
• Easily tuned EFI
• Electric start
• Excellent clutch