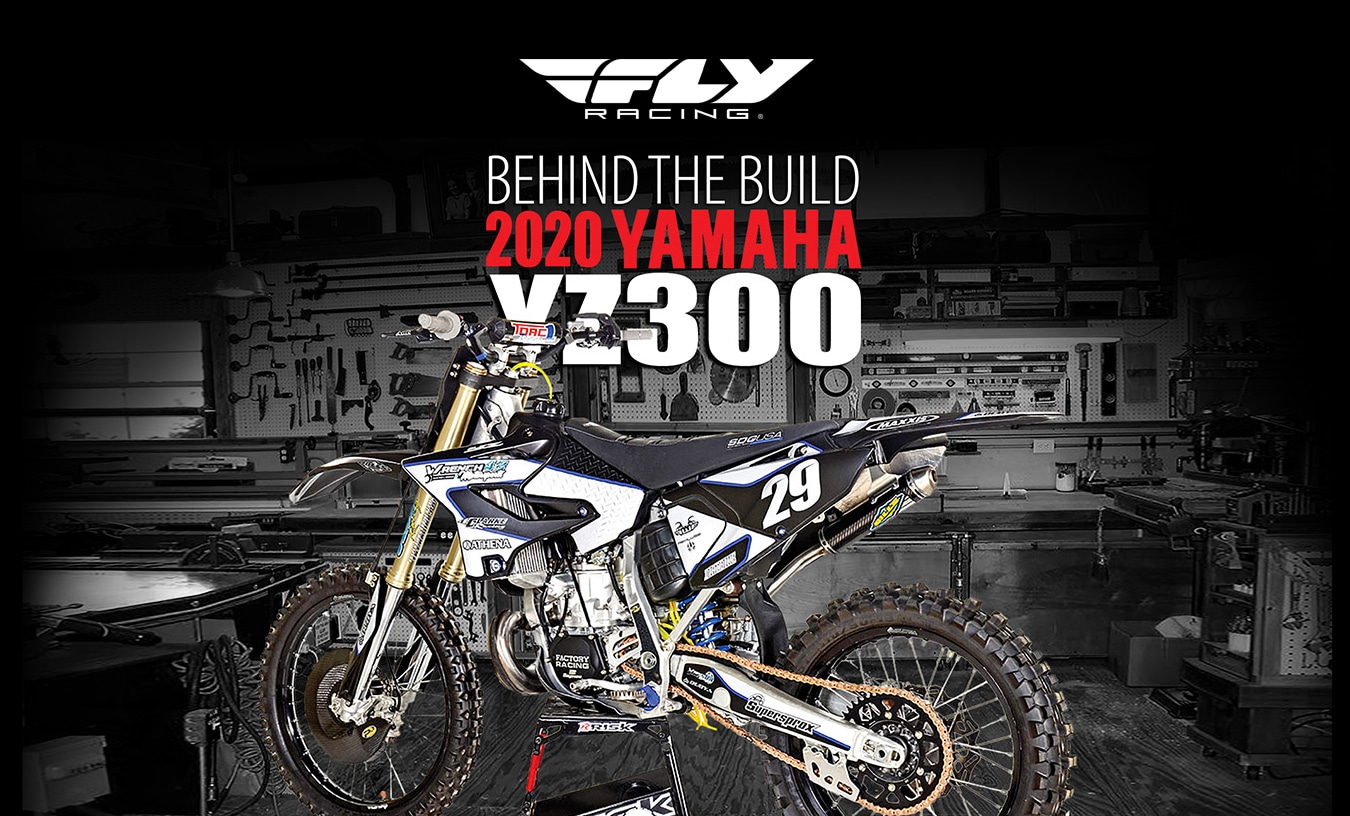 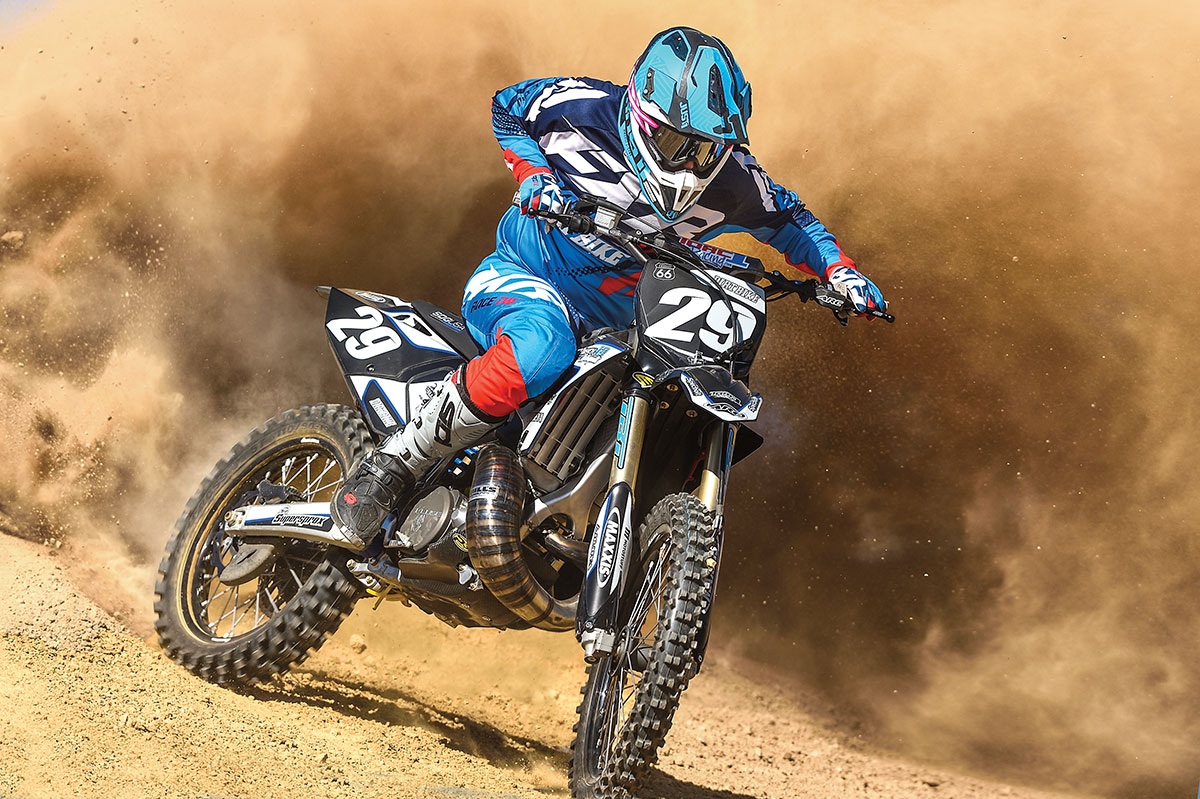 We started out with our test mule that had 50-plus hard hours on it. Anthony and the crew at Wrench 42 Motorsports did all the manual labor on this project. For once we got to sit back and sip a cold drink while we watched others sweat. With the bike seeing some heavy usage, Wrench 42 Motorsports decided it needed a complete tear-down and rebuild. They didn’t just pull the engine out and rebuild it; they took the entire machine apart piece by piece. The entire chassis was taken apart, and the main frame, subframe, swingarm, linkage and triple clamp were vapor-blasted in-house.

The stock wheels were hammered and in need of some major attention. Those were sent off to Kristen at Dubya USA where they received the VIP treatment. The hubs were cleaned up and Cerakoted dark grey, and new bearings were installed. The refreshed hub was laced up to a set of black rims using stainless steel spokes and nipples. All the bearings on the chassis, including the linkage and swingarm pivot bearings, were replaced upon reassembly with complete kits from ProX.

Wrench 42 Motorsports is also a TBT suspension franchise service center, so they took care of the suspension needs as well. The setup was stock, so it was a bit on the soft side. Our goal was to get a slightly firmer setting without losing the rider comfort provided by the OEM Yamaha setting. When we told Anthony and Brian this, they both smiled and said, “We know exactly what to do.” Other bolt-on items added to the chassis portion of the build included Torc1 handlebars, grips and ARC folding levers with the RC-8 quick-adjust clutch system. 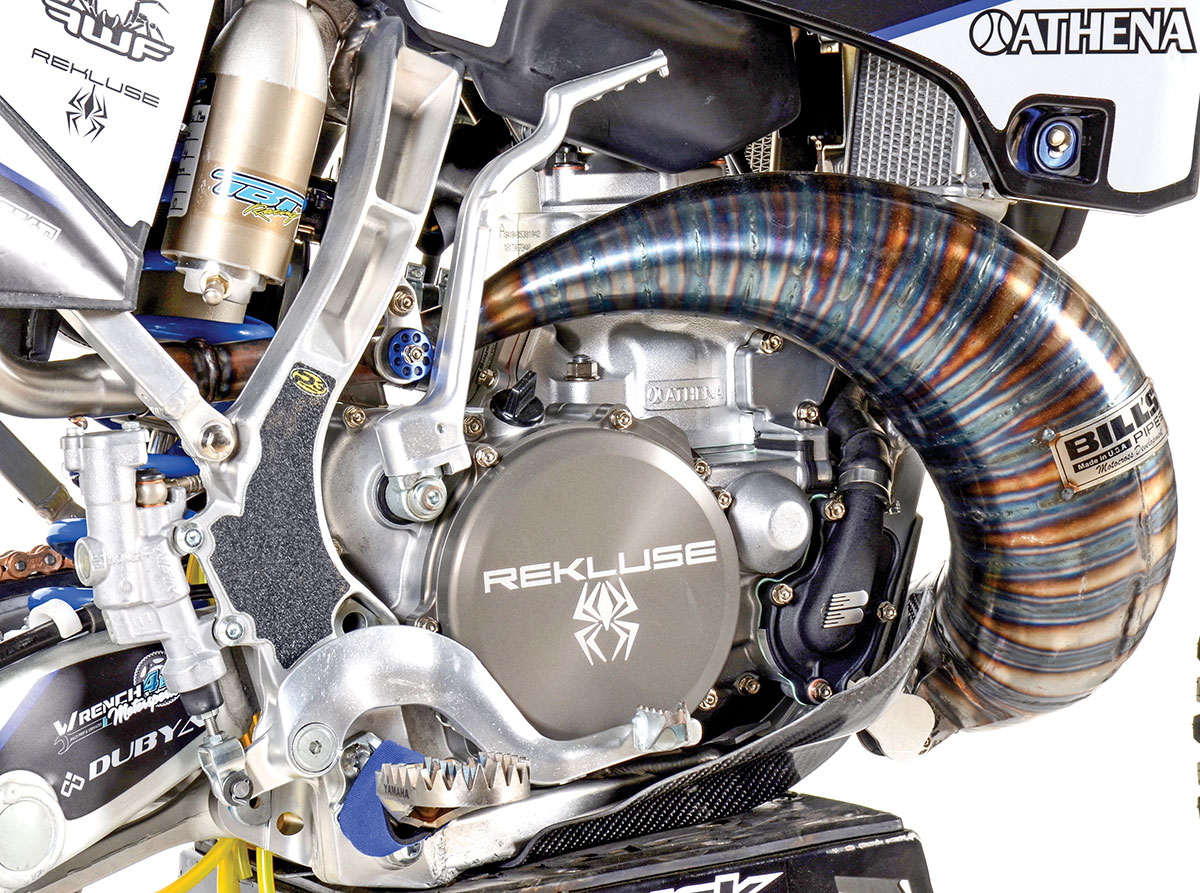 As you can imagine, the powerplant of our build drew a lot of attention. Once the engine was removed from the frame, it was sealed up, and the entire outside was vapor-blasted to give it a new-looking finish. Once blasted, it was completely torn apart so that every internal piece could be inspected and cleaned. A new ProX complete crank and rod assembly was installed on the bottom end, while an Athena big-bore cylinder kit was installed up top.

The Athena kit is 293.2cc total, with a 72mm bore and 15.0:1 compression. Each kit includes a cylinder, cylinder head, piston, rings, wrist pin, wrist-pin bearing, top-end gasket set and power valve—everything you will need to install the kit, except the mechanic. A Rekluse TorqDrive complete clutch was also installed, giving us some adjustability when it came to stiffness of pull and the amount of power transferred to the ground.

All the components were hard-anodized to resist wear. With more cc, there is a need for more fuel, so a Boyesen Rad Valve intake system was installed, and the Wrench 42 Motorsports crew made some minor carburetor adjustments to make all the parts work in unison. Boyesen also makes Supercooler kits for the Yamaha two-stroke that use a larger impeller internally and a computer-designed water-pump cover that flows more fluid to keep operating temperatures lower. The last performance enhancement for the engine was the installation of a Bill’s Cone Look pipe and carbon fiber silencer. 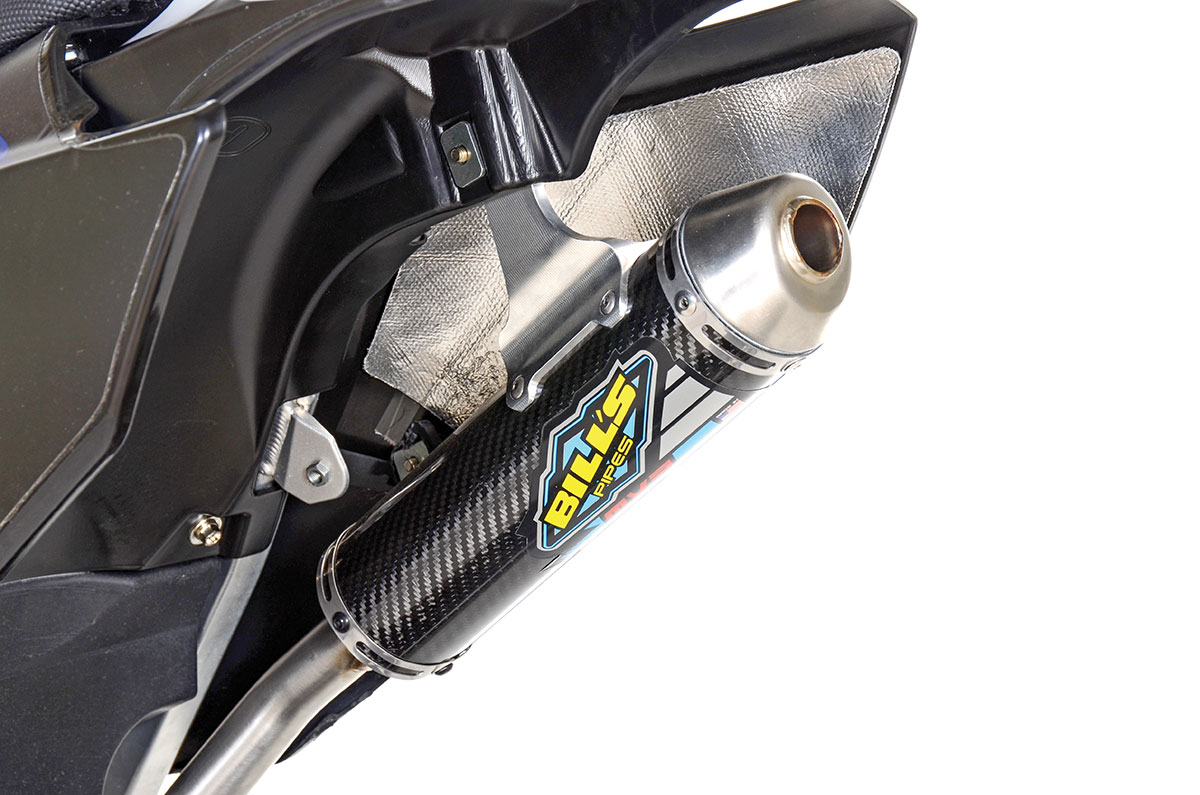 When it came to the overall look of our Wrench 42 Motorsports build, we wanted to emphasize just how drastically different this bike was from what rolled off the Yamaha assembly line in Japan, so we had no choice other than to black it out. This is a little more difficult than just ordering black plastic. Yamaha two-stroke tanks are blue, and there aren’t very many companies making black versions as direct OEM replacements.

Clarke Manufacturing in Molalla, Oregon, is one such company and has been around the motorcycle industry for a long time, making OEM replacement tanks for a variety of two-stroke models. Once the new black tank from Clarke Racing and black plastics from Cycra were installed, Jared Hicks from Backyard Designs created a custom set of graphics that incorporated all the companies involved and a little bit of color for contrast. The build was topped off with a full-coverage carbon fiber skid plate from P3 Carbon, titanium Pro Pegs from Moto Stuff, and a complete bike Nickel Würks bolt kit from Specbolt. 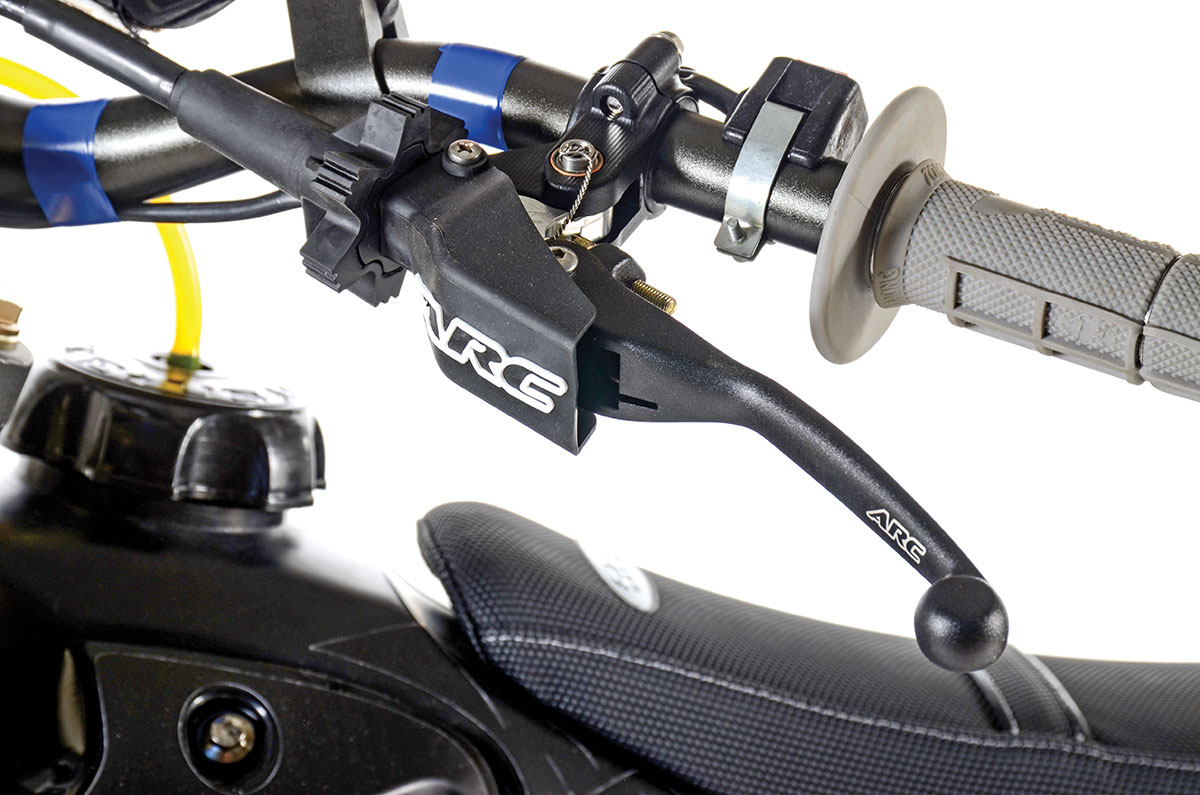 Well, it’s true what they say: the closer you get to 300cc on a two-stroke, the better life is—at least for some people. Our Wrench Motorsports YZ300 project makes tons of power right off the bottom and pulls strong through the midrange. Yes, it does need to be shifted sooner than the stock YZ250, because some top end is lost, but it gives you plenty of usable power beforehand. Running straight pump gas is okay for slower riders, but a 50/50 mixture of pump gas and race fuel worked best for us. Just like with any big-bore kit, we did experience a slight increase in engine vibration.

We recommend always wearing a boot when trying to kickstart an Athena YZ big-bore kit. The additional compression is no joke. A couple test riders’ feet were injured trying to start ours with tennis shoes. We now know why Anthony and Brian were smiling when we said what we wanted suspension-wise. They really did know exactly what we wanted. With the exception of setting the sag and dialing in the clickers, they nailed it! The machine tracks straight, settles into corners and soaks up big hits with no issues. It’s a blast to ride.