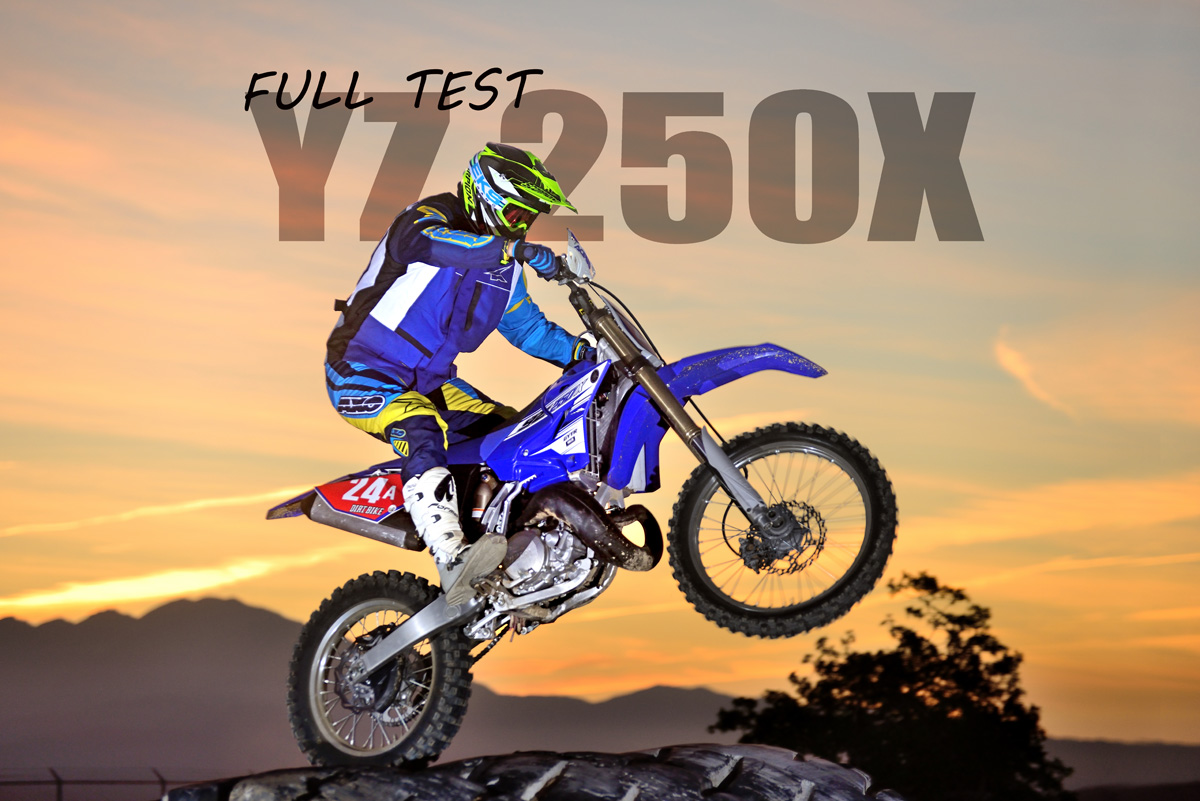 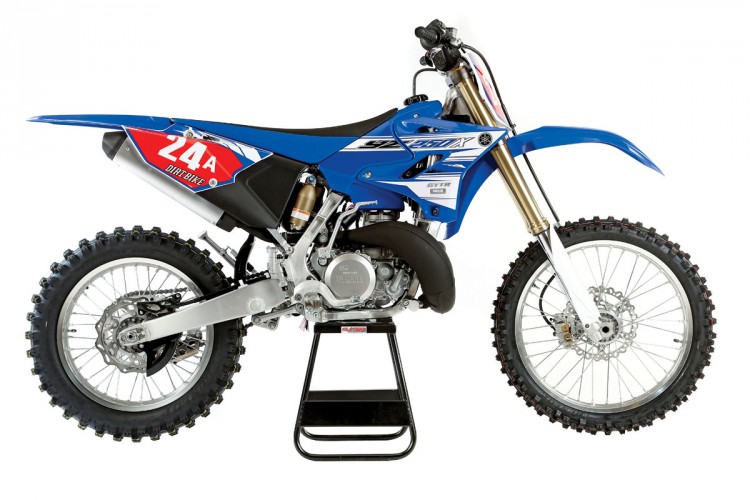 Finally. We’ve been waiting for this machine—a mutant YZ250-based off-road race bike that doesn’t require a re-engineering of the wheel but retains the hard-core strengths of the YZ250 mated to “just enough” versatility—for years. Naturally, it’s not as easy as just infusing it with some savvy engineering and tossing it out for the public to chew on. Giving it an infusion of GNCC blood would require proper amounts of off-road DNA that would not interfere with the positives of the lightweight motocrosser. The byproduct of this thinking is the new YZ250X, a motocross-based machine that has been optimized for the world of cross-country racing. 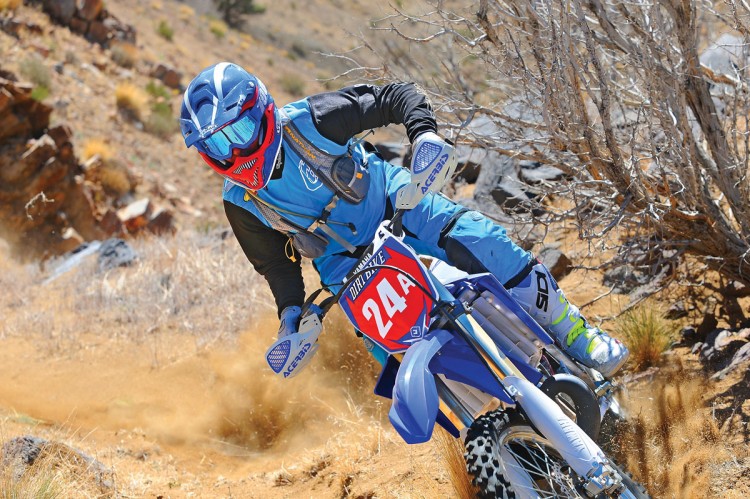 INSIDE THE MACHINE
When you scan the machine visually, there is little that’s obviously different from the motocross version. You can see the sidestand, and if you look closely, you’ll pick up on the 18-inch rear wheel. But unless X-ray vision is one of your skills, the big news is hidden in the engine and chassis of the X.
The engine is the same water-cooled, power-valved, carbureted design that has been around since 1999. It’s a five-speeder. It’s a kick-start-only machine, and it still uses some hardware that seems dated (Phillips screws on the ignition cover). Yet, the reality is far more complex, as the CDI, head, YPVS (Yamaha Power Valve System) power valve, transmission, exhaust pipe and clutch are all new.
Starting with the cylinder head: the volume was increased (21.5cc to 23.6cc), the compression ratio reduced (from 8.9:1 to 7.9:1) and the exhaust port was raised 0.5mm. A totally new power valve shape helped match it to the exhaust port, the new YPVS timing via the governor and spring, and its tension all target changes to broaden the power, keep it linear and get rid of any hard hit that would hurt traction. Other updates in the power department are CDI timing numbers that are delayed in the higher rpm and match up to the power valve and head changes for a smooth hit and tractable power delivery. And while the expansion chamber appears unchanged, it, too, is all new, tucking up tighter and out of harm’s way for better clearance.
Mated to the new power flow is a reconfigured transmission, a wide-ratio unit designed to handle a broader range of riding conditions. Thankfully, Yamaha was smart and kept first and second unchanged, lowered third gear (critical for off-road), and widened out fourth and fifth gears. The fourth cog is just slightly taller than on the YZ. Fifth is definitely an overdrive, equal to dropping five teeth on the rear sprocket. Another zone Yamaha attacked was the clutch. Yamaha reduced the spring rate by 10 percent, which helps dramatically with a softer clutch pull. This smoother engagement and lighter pull help in longer off-road events.
The frame remains a mix of aluminum castings, forging and extrusions, and the suspension is KYB. The fork is a spring unit with speed-sensitive damping but has been fit with all-new valving for off-road/cross-county terrain. Rearward, the shock and linkage are YZ-based. The spring rate is unchanged, but the valving is altered for better trail compliance and tractability. Last on the list of off-road updates are the sidestand, the 18-inch rear wheel, silver Excel rims (the YZs are black), Dunlop AT81 tires and an O-ring chain. The fuel tank was fit with a new petcock with a reserve. 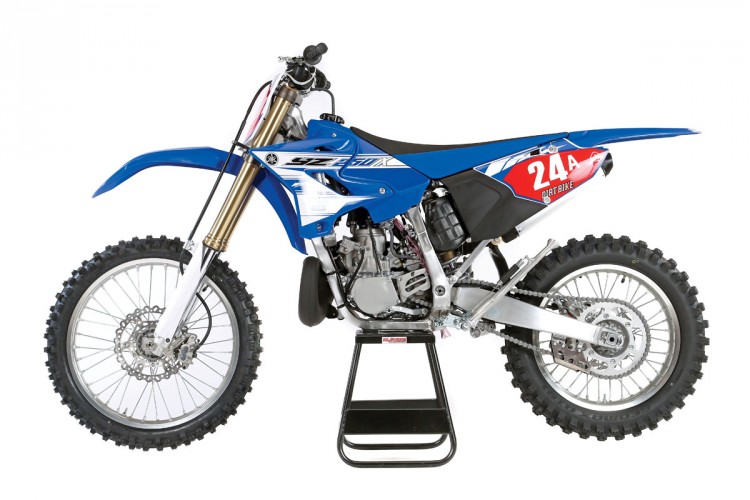 TRAIL/TRACK AND YZ-X COMPARISON
First off, there are a couple of things you’ll notice are lacking. There are no handguards. The fuel tank is small. And, there is no spark arrestor. All three areas need attention. We like hand shields to deflect roost, frosty air and smaller brush hits. The stock fuel tank is good for maybe 30–35 miles of trail, which is not even in the hunt with the others. And since it is a red-sticker-legal bike, we need a spark arrestor to ride in a large portion of legal areas.
With that said, we were fortunate to have a brand-new YZ250 along for the test. The differences between the machines are staggering. The X starts easier (less compression) and makes soft yet immediate steam starting very low in the powerband. The YZ takes more kick, and just plopping out of the hole there’s a hit, a softness, followed by a snarl that isn’t nearly as friendly as the X’s. Also, the clutch pull is definitely stronger. On the trail the X is nearly hitless, yet has enough muscle to make things happen quickly. There is virtually no snarl to the power; it’s smooth, straight as a railroad tie and pulls decently long. The gearbox is wonderful; third gear being tighter and well-suited to the power. The combination lets you throttle down and ride in a relaxed state. The YZ is quite the opposite, feeling almost throbby on the trail, craving a throttle-and-clutch dance that has you blasting from turn to turn rather than tracking like the X prefers. Overall, the X desires trail obstacles and conditions that warrant tractability and a smooth throttle. The YZ is a cut-and-thruster. It loves big hills and balks at technical terrain where you have to control the rear wheel with smooth throttle.
Adding to the X’s yearning for off-road is suspension valving that does a nice job of targeting a broad swath of the off-road environment. Both ends are plush, take in chop and digest it easily. Compared to the YZ, it’s almost too cushy. The YZ stays up in the stroke and likes to be hammered into obstacles. The X stays straight and smooth. The rear end seems to go through the stroke a little easily for guys at or over the 185-pound mark, yet it eats the trail kibble that is total hell on the YZ. Our bigger pilots actually liked the YZ a bit better in the speedier high desert. Our normal-sized pilots said it wasn’t close. The X tasted sweet, and the YZ left a bitter taste when the terrain got nasty.
We love the 18-inch rear wheel off-road. It actually helps the suspension feel and inspires traction. The Dunlop AT81 is one of the best off-road meats going. Yamaha’s sidestand didn’t seem to tuck in, yet it worked perfectly and never flopped. The X starts super easily and bump-starts with almost zero run since it’s a kicker. This is good! The ProTaper bars are excellent. The grips are decent. The brakes are strong enough, and we really appreciate the O-ring chain!
Gearing-wise, our normal-sized crew felt that first through third were excellent, and they loved the overdrive fifth. Thicker riders wanted one more tooth on the rear, which helped with second-gear trailing. Size-wise, the machine is compact. We had a KTM 300 along also, and in stock trim it has more space to move around on and is definitely better for a taller rider. And another note here: as good as the YZ250X is in its smooth power delivery, the KTM 300 is substantially stronger down low and is even more electric from bottom to mid. Just saying! One other interesting note: our testers, who ride and race Japanese machines, loved the layout and feel of the X; the KTM guys felt squished and complained about the high feel of the footpegs.
Jetting came zeroed in perfectly. The exhaust note is actually very soft through the straight-through muffler. And other than a flat rear tire, the X required very little maintenance time. The more we rode it, the happier we got. With the suspension we are going to try stiffer springs (and keep the valving stock) for our big guys. 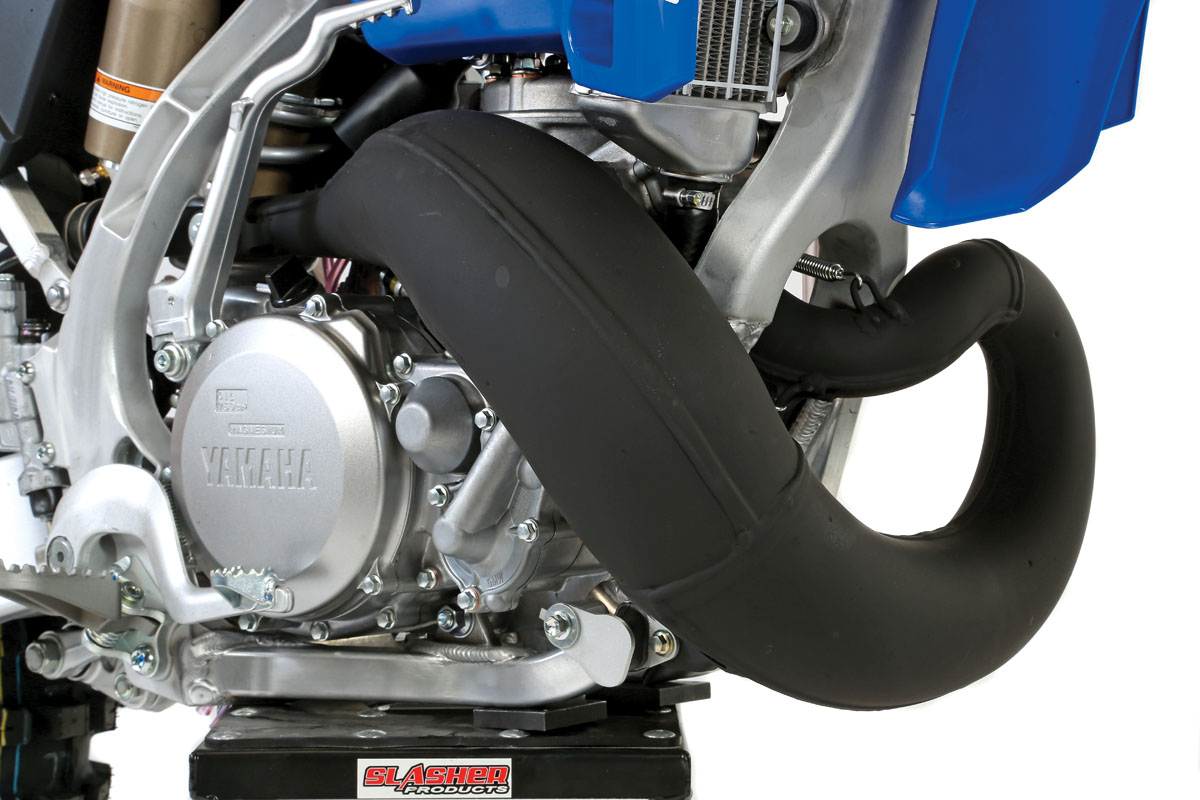 AND IN CONCLUSION
Yamaha has finally figured out that there’s a market here, a niche for a more versatile animal that has the inherent grit to take on a world that has been dominated by KTM for over a decade and a half. Yamaha’s YZ250FX is a complete success, and Yamaha just announced a new YZ450FX and will be using in-house technology and sharing it with products that are already in production so costs can be managed and new markets invaded. The YZ250X has instantly hogged out a place in our stable as a top choice for hard-core off-road. It’s that good! 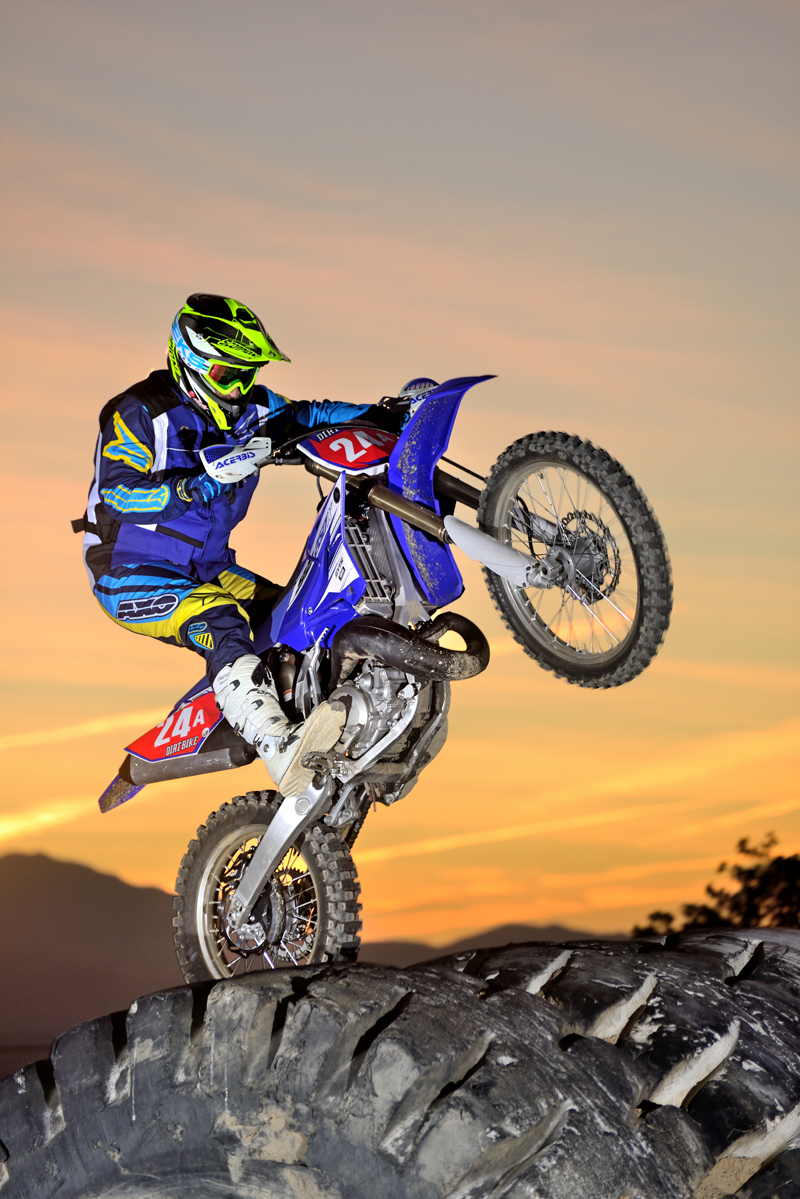