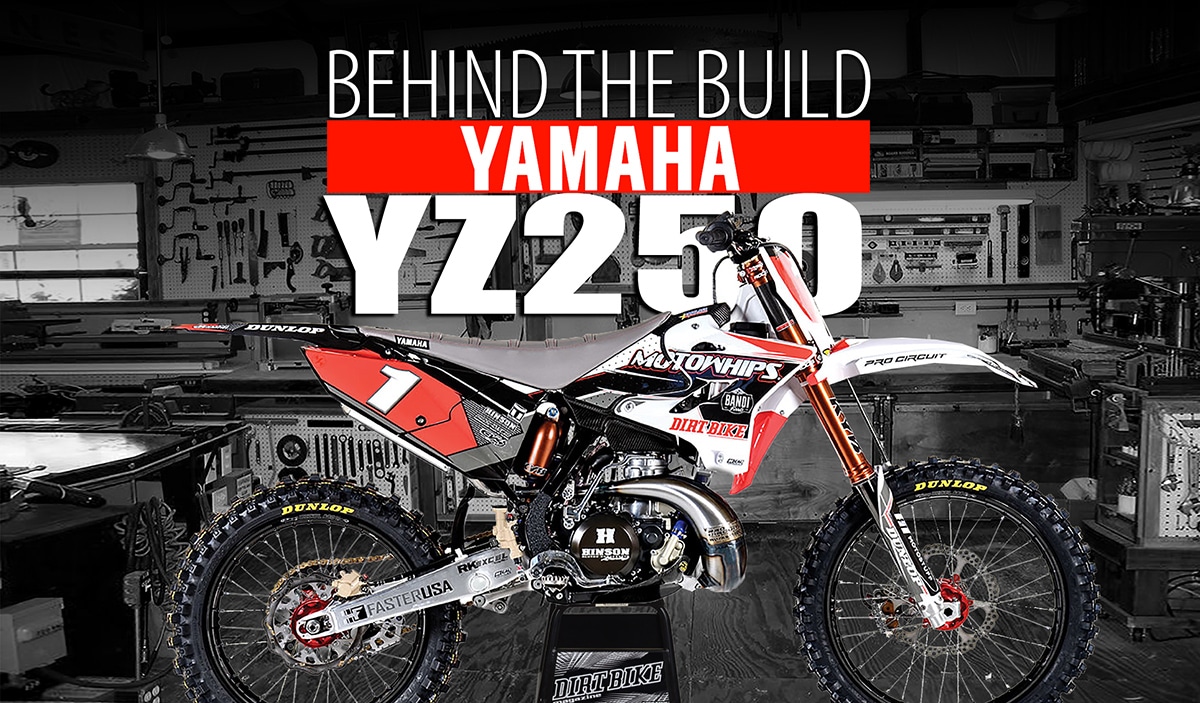 Justin Myerson from Moto Whips is back at it again with another two-stroke creation that will blow your mind. The “Prodigy 2.0” Yamaha YZ250 features the foundation of the original build from a couple of years ago, but has been taken to the next level of performance and, as always, the attention to detail is factory level.
After a little over a year of racing, the YZ250 needed some TLC, so it was torn completely down to the frame with every part inspected along the way. The decision was made to change the look entirely, so the frame headed to powdercoating for a unique white-and-black finish. Myerson went to work prepping other items for custom coating as well.

Moto Whips offers a variety of different colors and types of coatings to their customers. A cream color ceramic coating was used on the brake calipers and master cylinders with Core red steel-braided brake lines. The engine cases got some coating attention as well. Water-pump and power-valve covers are a custom brownish grey, while the right-hand side case is dark grey, but the crew at Moto Whips didn’t stop there. The suspension got heat-treated and coated inside and out. This is definitely not an inexpensive addition to the build, but Justin takes all the guesswork out of the process by handling it from start to finish.
Continuing with the red, white and black overall color scheme, a white Cycra front fender, number plate and radiator shrouds were teamed with black side plates and a rear fender. The stock blue plastic gas tank was replaced with a carbon fiber unit imported from Europe. Carbon fiber bling also spilled onto the engine in the way of the ignition cover, which is also imported by Moto Whips, and a P3 Carbon full-coverage skid plate made right here in the USA. A Faster USA wheelset featuring their billet-aluminum hubs anodized red, stainless steel spokes, aluminum nipples and black Excel A60 rims not only added some much-needed strength but also complemented the overall look. Nic Wright at Decal Works came up with a semi-custom graphics kit that tied the build together yet maintained that clean factory look overall.

Okay, we know what you are thinking: this build is all show and no go. We can assure you this is not the case! The engine received major modifications and aftermarket parts internally. The cylinder was hand-ported by Pro Circuit founder Mitch Payton, and the head was modified to match the cylinder. A slightly higher compression was used with an iconic Works Edition pipe and 304 Shorty silencer exhaust combination.
The Prodigy 2.0 runs on high-end race gas from now on. Internal modifications continued with the addition of a complete Hinson billetproof clutch that included a basket, inner hub, pressure plate, fiber drive plate, steel drive plate, stiffer high-temp springs and a CNC-machined cover that, like the internal machined items, is hard-coated for wear resistance.
While apart, all the transmission parts were tumbled and deburred for smoother shifting. For the final engine performance modification, the OEM reed-cage assembly was switched out for a Moto Tassinari VForce reed-valve system. The VForce system is designed to increase overall performance and throttle response right off the bottom.
Other notable bolt-on items included on the Prodigy 2.0 include an Xtrig ROCS Pro triple clamp featuring adjustable bar-mounting positions. We also installed their patented Progressive Handlebar Dampening System (PHDS) that is designed to reduce engine and chassis vibrations using different elastomers. A Moto Stuff oversized front rotor kit and Billet Works Edition one-piece caliper were installed for additional stopping power. The caliper’s billet construction increases rigidity by 28 percent, reducing flex, and the 30mm billet piston is designed to provide more stopping.

FINAL DRAFT
It’s safe to say the Moto Whips-built Prodigy 2.0 is easy on the eyes and gets tons of attention everywhere it goes. The real question is, “Does it perform as well as it looks?” In a word, yes! The performance side of the bike might even overshadow how great the bike looks. This machine is flat out fast. Justin Myerson did a great job dialing the bike in by matching the jetting perfectly to Pro Circuit’s engine modifications. Throttle response down low was immediate, and it had a very lively feel throughout the powerband.
All our pro-level test riders loved riding this bike, and about the only complaint we got out of them was that they didn’t get enough testing time. Our slower or less aggressive test riders enjoyed the abundance of power, but mentioned the suspension was a little on the stiff side and reacted a lot faster than stock suspension. Reaction-wise, this was all about the coatings reducing friction and drag. They are expensive, but all the factory-level race teams spend extra cash to have it done because it makes a difference. Test rider Matt Inda is currently racing Supercross Futures on this bike and racking up first-place trophies up and down the West Coast. Justin Myerson and the crew at Moto Whips knocked another build out of the park, and we look forward to seeing what they will come up with next.