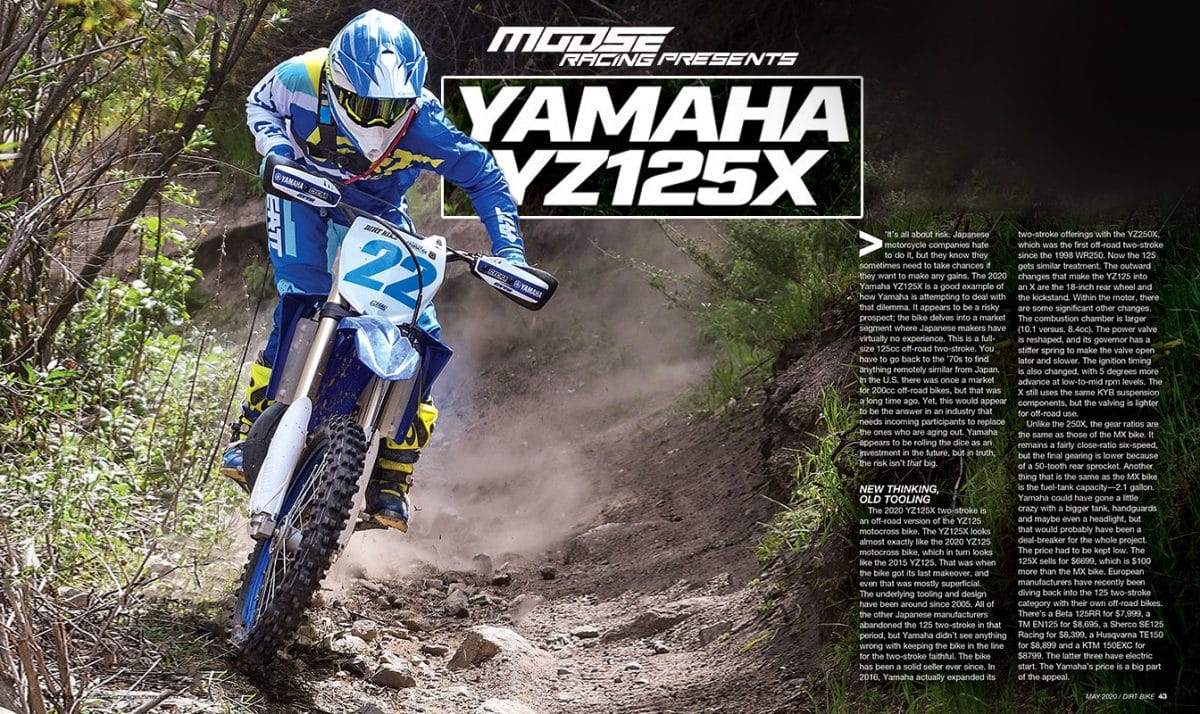 The 2020 Yamaha YZ125X seems like a risky move. It’s a full-size 125cc off-road two-stroke. You have to go back to the ’70s to find anything remotely similar from Japan. In the U.S. there was once a market for 200cc off-road bikes, but that was a long time ago. Yet, this would appear to be the answer in an industry that needs incoming participants to replace the ones who are aging out. Yamaha appears to be rolling the dice as an investment in the future, but in truth, the risk isn’t that big. 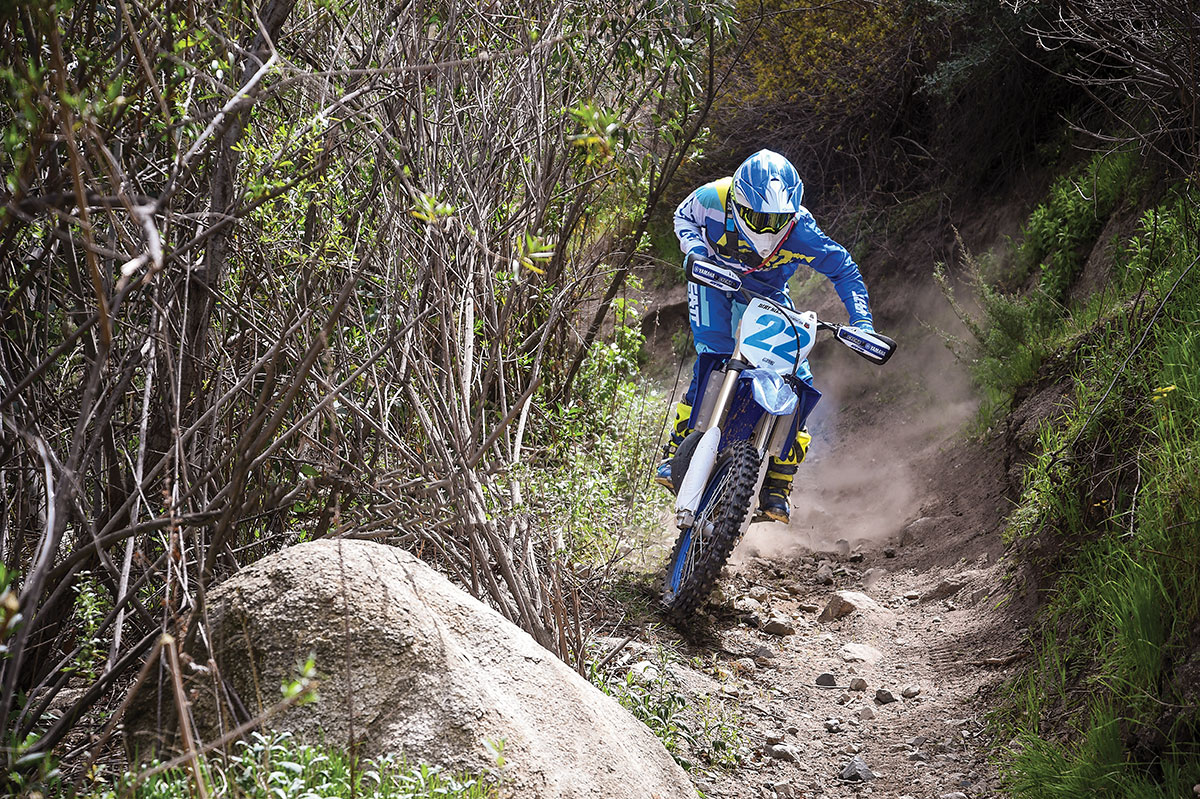 NEW THINKING, OLD TOOLING
The 2020 YZ125X two-stroke is an off-road version of the YZ125 motocross bike. The YZ125X looks almost exactly like the 2020 YZ125 motocross bike, which in turn looks like the 2015 YZ125. That was when the bike got its last makeover, and even that was mostly superficial. The underlying tooling and design have been around since 2005. All of the other Japanese manufacturers abandoned the 125 two-stroke in that period, but Yamaha didn’t see anything wrong with keeping the bike in the line for the two-stroke faithful. The bike has been a solid seller ever since. In 2016, Yamaha actually expanded its two-stroke offerings with the YZ250X, which was the first off-road two-stroke since the 1998 WR250. Now the 125 gets similar treatment. The outward changes that make the YZ125 into an X are the 18-inch rear wheel and the kickstand. Within the motor, there are some significant other changes. The combustion chamber is larger (10.1 versus. 8.4cc). The power valve is reshaped, and its governor has a stiffer spring to make the valve open later and slower. The ignition timing is also changed, with 5 degrees more advance at low-to-mid rpm levels. The X still uses the same KYB suspension components, but the valving is lighter for off-road use.

Unlike the 250X, the gear ratios are the same as those of the MX bike. It remains a fairly close-ratio six-speed, but the final gearing is lower because of a 50-tooth rear sprocket. Another thing that is the same as the MX bike is the fuel-tank capacity—2.1 gallon. Yamaha could have gone a little crazy with a bigger tank, handguards and maybe even a headlight, but that would probably have been a deal-breaker for the whole project. The price had to be kept low. The 125X sells for $6699, which is $100 more than the MX bike. European manufacturers have recently been diving back into the 125 two-stroke category with their own off-road bikes. There’s a Beta 125RR for $7,999, a TM EN125 for $8,695, a Sherco SE125 Racing for $8,399, a Husqvarna TE150 for $8,899 and a KTM 150EXC for $8799. The latter three have electric start. The Yamaha’s price is a big part of the appeal.

SCHEMING AND SCREAMING
Riding any 125 on the trail is a study in adrenaline. You have to be excited and aggressive to keep it on the bubble. With the X, though, you can lay off the clutch for level sections of trail. It has more low-end than the stock Yamaha, and the hit isn’t quite as hard. If the trail turns and goes uphill, you have to be ready with a downshift or some fancy clutch work. After that, you have to be ready with a quick upshift, because the motor doesn’t rev nearly as high as that of a modern four-stroke. The 125X isn’t for sleepy trail rides. It’s for fast-paced riding and play racing. That’s fine with virtually everyone who rides it, because the bike handles like magic. It makes you want to ride hard. On our scale, the bike weighs 204 pounds without fuel. That’s only a few pounds heavier than the motocross version. Riding a bike that light makes you a superhero.

You can get away with almost anything. We have spent a fair amount of time riding the 2020 KTM 150XC-W, which is only a couple of pounds heavier, but riding that bike is a very different experience. In short, it’s a bigger, more powerful bike. It has more torque, it has more midrange, and it revs higher. In overall handling, though, the Yamaha has the upper hand because it feels much smaller and lighter. Plus, the Yamaha’s suspension is outstanding. It’s well-balanced, and the overall action is super plush. It is soft, though. The bike is set up for younger riders. This would be an excellent bike for kids transitioning out of the mini ranks in motocross. It’s also a great machine for older riders who don’t want to carry around a 450 on the trail. Most 40+ off-road riders don’t know it, but they would be much happier on a 125. This particular 125 has the advantage of running super cleanly down low. It still doesn’t make a whole lot of power down there, but you can’t kill the motor by grabbing too much throttle on level ground. That takes some of the stress out of your ride. 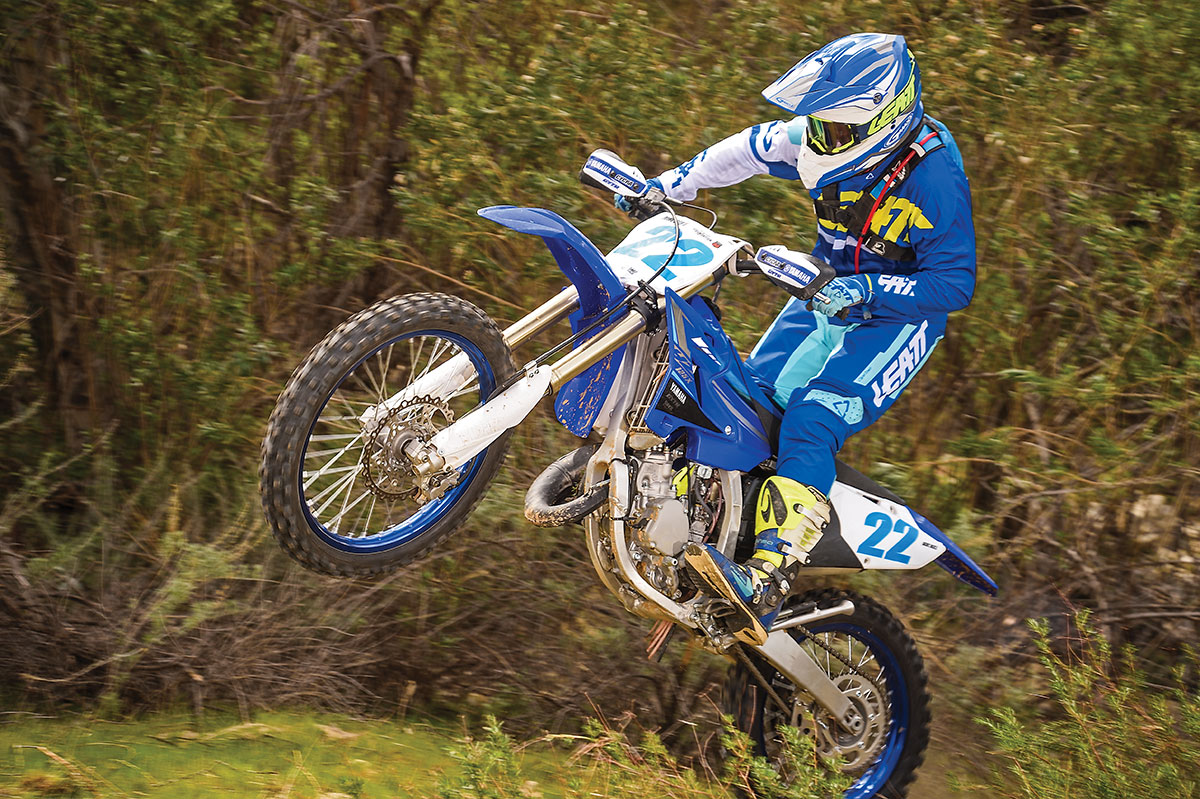 THE CROSSOVER FACTOR
The YZ125X has so much in common with its motocross version that most riders would be hard-pressed to tell the difference without a back-to-back comparison. You can take the X straight to a motocross track and race it without sacrificing that much. We know, because we did it. Pete Murray raced the bike on Glen Helen’s REM track. That particular track is so tight and technical that the soft suspension isn’t a big deal, even for a 170-pound rider. On Glen Helen’s National track, it’s a different story.

The bike is too soft all the way around—in both suspension and power. In any racing situation, the 125X will likely find itself out-gunned by European 144cc two-strokes, and it even gives away just a little edge to a YZ125 MX bike. Even though its handling is phenomenal, it would take a lot of work to make up for 10 horsepower or so just by diving into corners harder and braking later. The YZ125X’s true domain is the fun ride. That’s where it beats almost everything on wheels.

We don’t know if Yamaha’s investment in the future will pay off. We do know that the off-road world as a whole is a little better off now that it includes the YZ125X. It’s a bike that’s so good, it makes dirt bike riding as a whole more appealing.