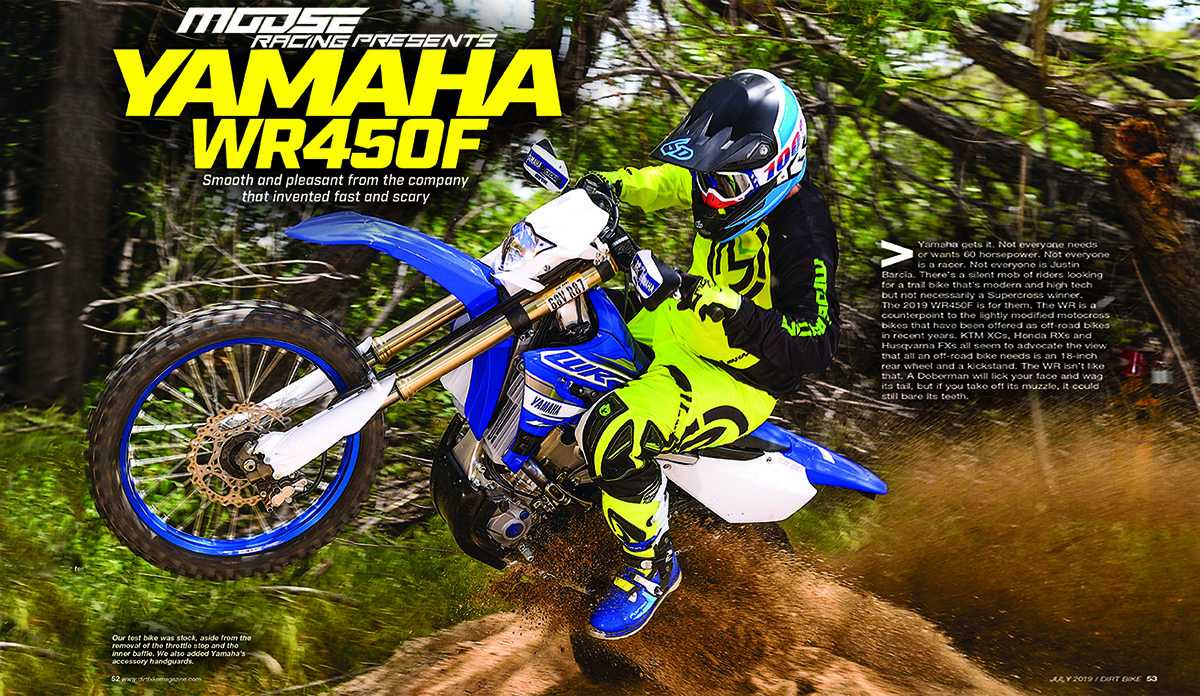 Yamaha gets it. Not everyone needs or wants 60 horsepower. Not everyone is a racer. Not everyone is Justin Barcia. There’s a silent mob of riders looking for a trail bike that’s modern and high tech but not necessarily a Supercross winner. The 2019 WR450F is for them. The WR is a counterpoint to the lightly modified motocross bikes that have been offered as off-road bikes in recent years. KTM XCs, Honda RXs and Husqvarna FXs all seem to advocate the view that all an off-road bike needs is an 18-inch rear wheel and a kickstand. The WR isn’t like that. A Doberman will lick your face and wag its tail, but if you take off its muzzle, it could still bare its teeth. 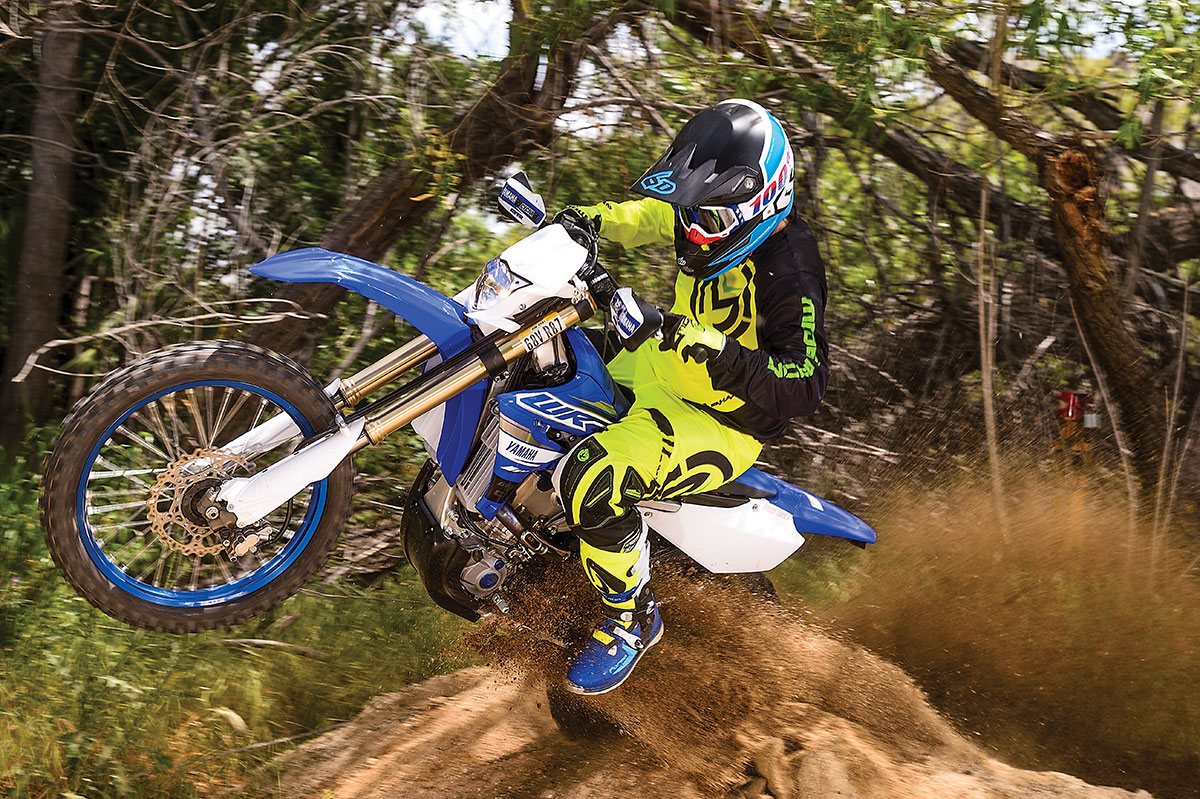 ALL BASES
So the 2019 Yamaha line now has three up-to-date 450s. The YZ450F motocross bike was completely redesigned for the 2018 model year with a new motor, new frame and Wi-Fi connectivity for engine mapping. In 2019 the YZ450FX came out with all those same features. Its mission was to be an off-road race bike, so it still was very aggressive. The FX got a larger fuel tank, softer suspension, wider gear ratios, a different clutch, slightly mellower mapping, an 18-inch rear wheel, a kickstand and a few other changes. It still had the motocross muffler without a spark arrester. The one additional feature that set it apart from the others in this category was a wide-ratio gearbox.

Now the WR450F has arrived as a late 2019 model. It has all the off-road stuff from the FX, plus a headlight, an odometer, a radiator fan, softer suspension yet, a spark arrester, a very quiet muffler, more generator output and altogether different mapping. This is the bike that Yamaha designed to meet EPA and CARB requirements for noise and emissions as an off-road vehicle (as opposed to a closed-course vehicle like a motocrosser). That official certification hasn’t come for the 2019 model year. There is some confusion over the evaporative canister that is yet to be resolved. So, California buyers beware; this is a red-sticker motorcycle for now. Oddly enough, this bike still comes to dealers with a throttle stop and a muffler within the muffler. We never rode our test bike with those in place. It was still super quiet. This bike does not get the Wi-Fi connectivity for mapping changes. In fact, the mapping is fixed, and the black box is said to be tamper-proof. 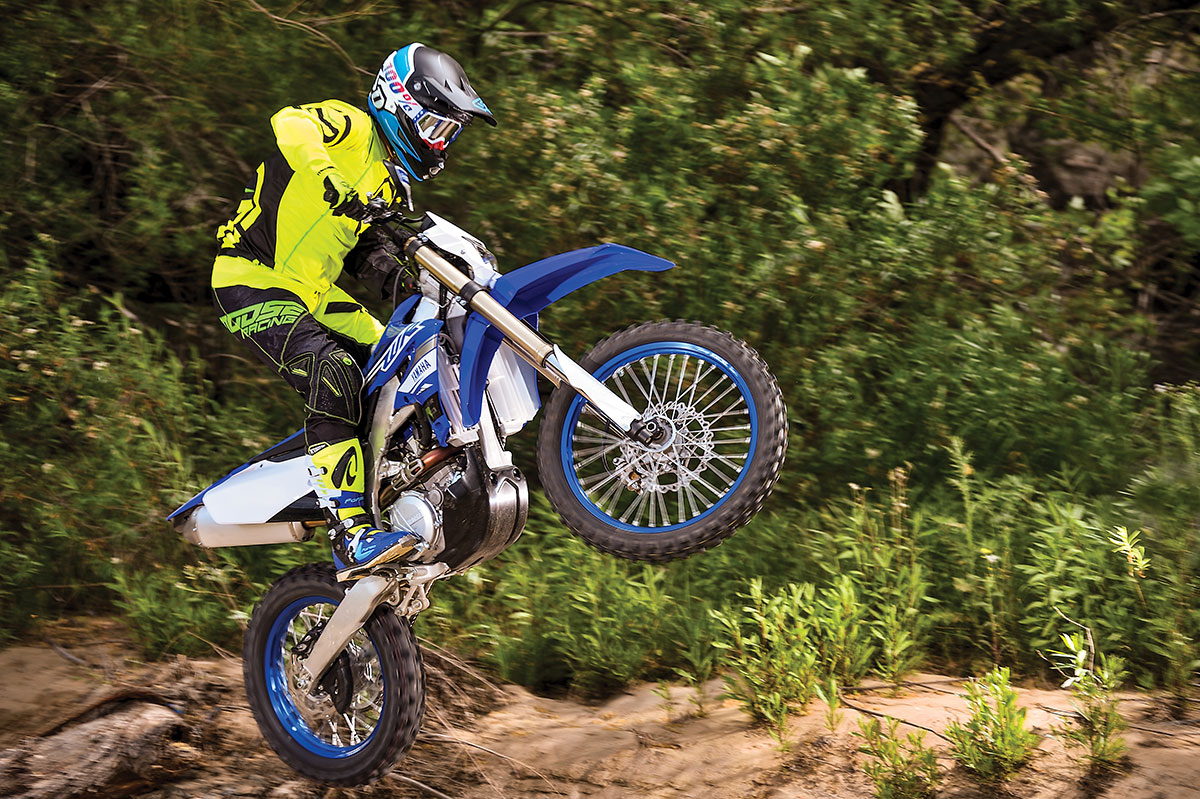 THE PREVIOUS WR
Yamaha had a WR450F in 2018, but it was completely different. It was a throwback to the 2017 YZ frame and engine configuration. That bike was originally designed to be kickstart only, then had an electric starter added after the fact. The engine cases on the new bike are more compact, and the starter is positioned over the gearbox where it can drive the clutch basket. The frame is completely redesigned to be more rigid than the old version. According to Yamaha’s information, it’s 25 percent stiffer on a vertical plane, 9 percent stiffer horizontally and 15 percent stiffer torsionally. Plus, the bike is narrower and has a lower seat height.
The suspension components were upgraded to the latest KYB units, too. The WR has the same basic fork and shock that the new YZ has, but the spring rates are much lighter. In the rear, the WR has a 56 N/m spring rate, whereas the YZ has a 58. The WR fork springs are 4.6 N/m versus the YZ’s 5.0. Also, like the new YZ, the WR’s front axle is 2mm larger at 22mm.

SNEAKY PETE
This is a true trail bike. It’s quiet and easy to ride. The knee-jerk response most people have is to ask about “unplugging” it. It’s not necessary, beyond the two changes that we mentioned earlier. We have never really understood the throttle stop or the inner muffler; they seem like drastic overkill, and full-time street bikes like the FZR1000 aren’t burdened with such measures despite being subject to even stricter noise standards. As tested, the WR has plenty of power, and Yamaha did a good job with the stock mapping. It isn’t one of those bikes that simply doesn’t work in a quiet configuration. It doesn’t backfire, it doesn’t hesitate, and it runs clean. The power is much better than that of the previous WR, but we would stop far short of saying it’s fast by the standards of a modern 450 motocross bike. That kind of power is simply unusable on the trail. One interesting benefit of having a milder motor is that first gear is more practical. On the FX, the super-low first gear doesn’t work well with the aggressive motor; it’s simply too much, too quickly. The WR’s first gear is much more practical. Our only real complaint is that the WR is hard to start. The bike likes a little throttle, but not too much. There’s no kickstarter, so you have to be frugal with the electric starter. Yamaha chose to give the bike a lead-acid battery instead of a lithium unit. There are pluses and minuses here. It’s heavy, but it also withstands cold weather much better than lithium. Whenever you stop, the WR’s electrical system remains live for a few seconds, and during that time, the fan almost always runs. This might cause worry about the battery capacity, but we never ran it empty.

What really makes the WR so good on the trail is the suspension. It’s soft and cushy but doesn’t dive under braking like many other trail bikes and dual-sport machines. For the average trail rider weighing around 180 pounds, the spring rates are perfect for moderate trail riding. In previous generations, Yamaha overshot the mark and made the bike too soft for almost anyone. Now, you only have to consider stiffer springs if you’re dealing with higher speeds and bigger whoops—say a well-used trail with a pace above 45 mph. If you’re pushing hard on any trail, you might be able to overtax the stock settings. Likewise, the bike is a touch on the heavy side for really aggressive riding. There aren’t many other 450 off-road bikes for comparison, but the Yamaha is a good 20 pounds heavier than a KTM 450XC-F and even a little heavier than a Beta 430 dual-sport bike, mirrors and all. 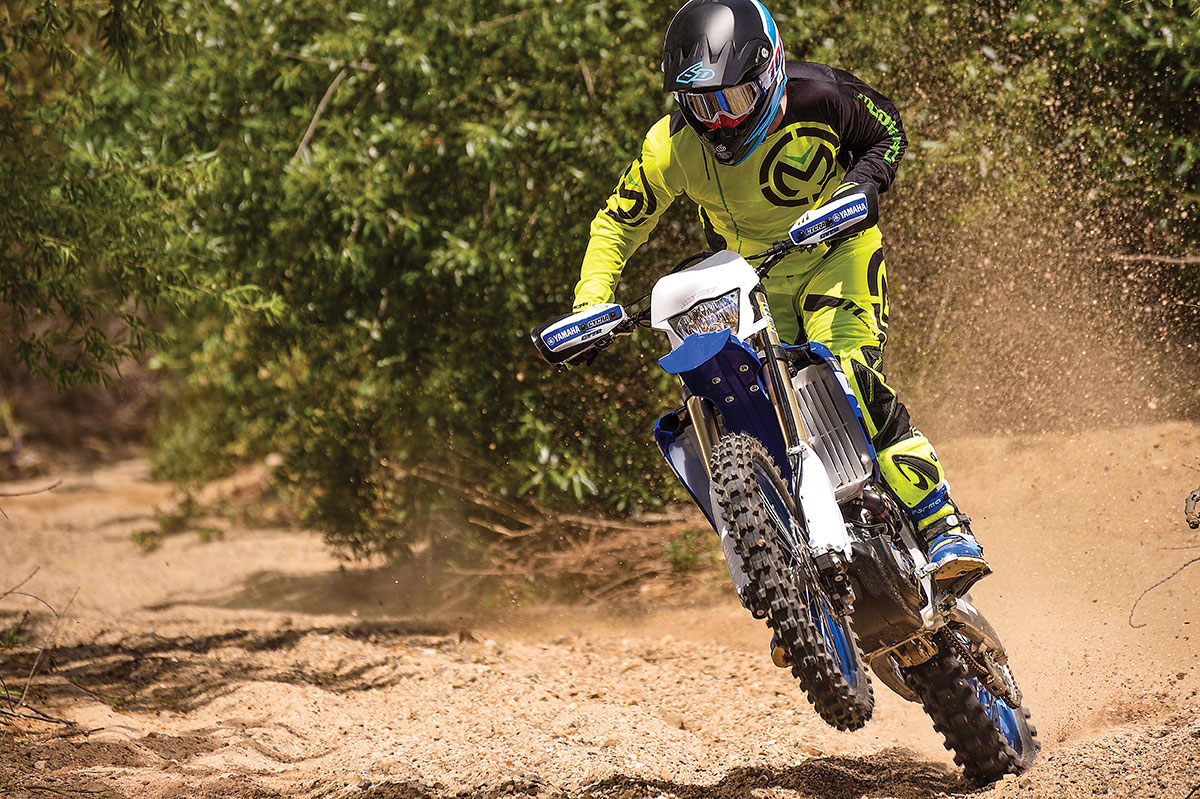 WHERE TO GO FROM HERE
We do understand the impulse to go for more power out of the WR and, apparently, so does Yamaha. Yamaha Parts and Accessories has a power-up kit that replaces the black box with a programmable one for $150. If you get the Wi-Fi communication unit ($300), it can be altered with a smartphone, just like the YZ. This is a smart, affordable upgrade and allows you to stop anywhere you want on the road to making the bike more powerful. At some point, a competition muffler will have to come into play, but there’s more performance to be had with mapping alone.
Other makers don’t do nearly as good a job with in-house accessories for off-road bikes, leaving you at the mercy of forums and YouTube videos. Yamaha’s stuff makes the WR into a chameleon of a motorcycle that can theoretically be converted into a full-blown motocrosser with minimal expense. It can also be plated and used as a dual-sport in some states. Federal laws would frown on that, of course, but people will do it, and the WR will be perfectly at home in that role. No other bike makes this kind of transformation so easy and accessible. It’s a bike that can change what it is in order to match its owner, even if its owner isn’t sure who he is.