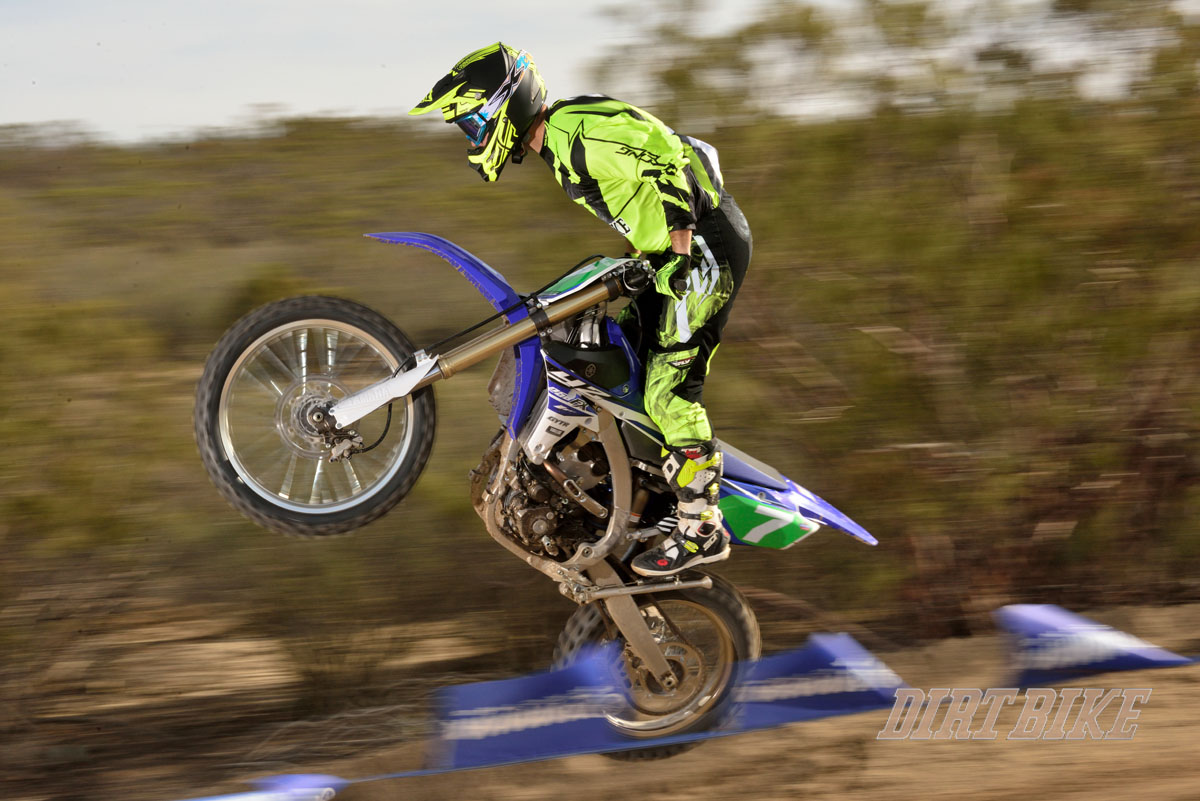 With two days of riding the new Yamaha WR250 and YZ250FX we’re more impressed than ever with Yamaha’s new direction in the off-road world.  The two bikes are, as we’ve reported earlier, almost the same product. But there’s a very big difference in philosophy. The fact that the YZ250FX even exists is very big news. It means that Yamaha is making an off-road bike specifically for racing on closed courses. Previously, any Yamaha marketed for the off-road riders was an EPA and CARB approved trailbike, which is a far cry from a race bike. The previous WR250F was a perfect example. It was super quiet, super clean and super mellow on the trail, but very difficult to wake up. Anyone interested in racing the 250 class went straight to the YZ without even looking at the WR.  But both these new Yamahas are great trail bikes and both can be raced. The big news is that the FX can be raced without modification.  Here are the Cliff Notes on the two bikes:

This is the logical successor to the carbureted, five-valve WR250F that was unchanged in the line from 2007 to 2014. Thankfully, Yamaha used the latest YZ250F as a starting point. So it got all the technology and all the features that the YZ just got; most notably fuel injection and the reverse head with the intake in front and the exhaust in the rear. But the WR is true to its mission statement: It’s a trail bike. It fills two special needs: to appeal to the traditional off-road rider who wants a super quiet noise level, and to appeal to the government, which wants clean emission levels in anything not classified as a closed-course vehicle. It’s important to note that noise and emissions are two different issues with different types of enforcement.  With noise, enforcement effectively happens at the point of operation and the end user is held responsible. With emissions, the government can come down hard on the manufacturer. Oddly enough, it’s the California government that has been doing almost all of this enforcing , even though the Feds have their own rules.

So the WR is a new YZ250F motocross bike with the following changes:

The last three items are all noise related. Our test bike arrived with an unrestricted throttle stop, allowing full throttle, and with the intake and exhaust baffles removed. The bike was still astonishingly quiet.

If you’re familiar with the previous incarnation of the WR, here’s the good news. The new WR does just about everything better.  It’s faster. It handles better. The suspension is  far, far superior to the antique components on the old WR. It is a purebred trail bike, though. It’s soft in every way. Soft suspension, soft power delivery, soft noise output and soft mission statement. There are a lot of riders who will love it for that. They’ve been waiting for a more modern WR for a long time. The new bike feels much lighter than the old one. The actual weight is nearly the same; the new WR weighs 248 pounds without fuel. But there are some trade-offs involved. Fuel injection brings handcuffs. If you don’t like the way it runs, there’s nothing to adjust or alter. We would love to get more fuel into the motor at the initial throttle openings. It lags down there as if it’s on the verge of running out of gas. Yamaha does offer an adjustable EFI black box through its accessory division, and if you install it, you make the bike into a closed-course vehicle. As you probably guessed, that black box is the one that comes stock on the FX. So if you do that, you’re simply taking the first step in turning your bike into an FX.

By calling the YZ250FX a closed-course vehicle, Yamaha sidesteps all of the bureaucracy.  The FX is basically a WR stripped of all its noise and emission restrictions. That means no intake restrictor, no throttle stop and an MX muffler (from the quieter, Euro-spec YZ). The fuel mapping in the black box isn’t fixed, and its default settings are much richer than the WR’s. They aren’t quite the same as the YZ’s settings, but you can alter them with the GYTR Power Tuner. The FX version is further dialed into its target buyer with stiffer suspension and a front number plate replacing the headlight. It has no skid plate, although the mounts are still there. Another way of looking at the FX is to compare it to the YZ250 motocross bike. The performance is actually almost identical to that of the YZ. In case you don’t remember, that means it’s fast. The YZ won our motocross shootout by virtue of its incredible motor. It had more low-end and mid-range power than anything in the class. Only the KTM made more on top, and that was almost entirely by virtue of a higher rev limit. The YZ’s suspension also was on top of the heap. But do those traits translate well off-road?

Yes.  The YZ250FX is a great off-road bike.  And it’s still a good racer. This is one of the first 250 four-strokes that could really do both. All the previous 250Fs were either one or the other, but the Yamaha will chug along at low rpm willingly. Then it will scream when the time is right. We know, 250 four-strokes aren’t the most popular bikes in the off-road world; two-strokes and 450s still rule the kingdom. But the KTM 350 has had a serious impact on the pecking order, and we have a feeling that the new Yamaha will further change the balance of power. The bike handles great. It feels lighter than anything this side of a 125. The FX is 9 pounds lighter than the WR, and while that’s still heavier than most two-strokes, you would never know it. There might be something to all of that talk about mass centralization.

Both Yamahas have outstanding suspension. The FX has stiffer valving in the fork and a stiffer spring in the rear, compared to the WR. We don’t know which we like better. It all boils down to how fast you’re going. In first and second gear, the WR’s suspension is unbeatable. It sucks up rocks and keeps you on course in comfort. In third gear and higher, you appreciate the stability that the FX suspension offers. It doesn’t dive when you brake hard and maintains a fairly level riding attitude. 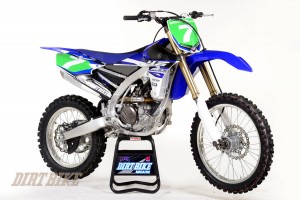 In the end, WR owners know who they are, just like YZ250FX owners know who they are. But this isn’t a mutually exclusive deal any more. In the past, if you bought a WR, that was the identity you had to live with. Now, the two bikes are almost one and the same. We’ve already converted our WR into an FX with a DRD slip-on exhaust and a YZ black box. The performance, in fact, exceeds that of the FX. And we still have the ability to put on the super-quiet stock pipe and ride in noise sensitive areas. It’s much more difficult to go the other way; to convert the FX into a quiet trail bike. So we see the logic in offering both bikes.  And we’re glad that Yamaha sees that logic too—finally. 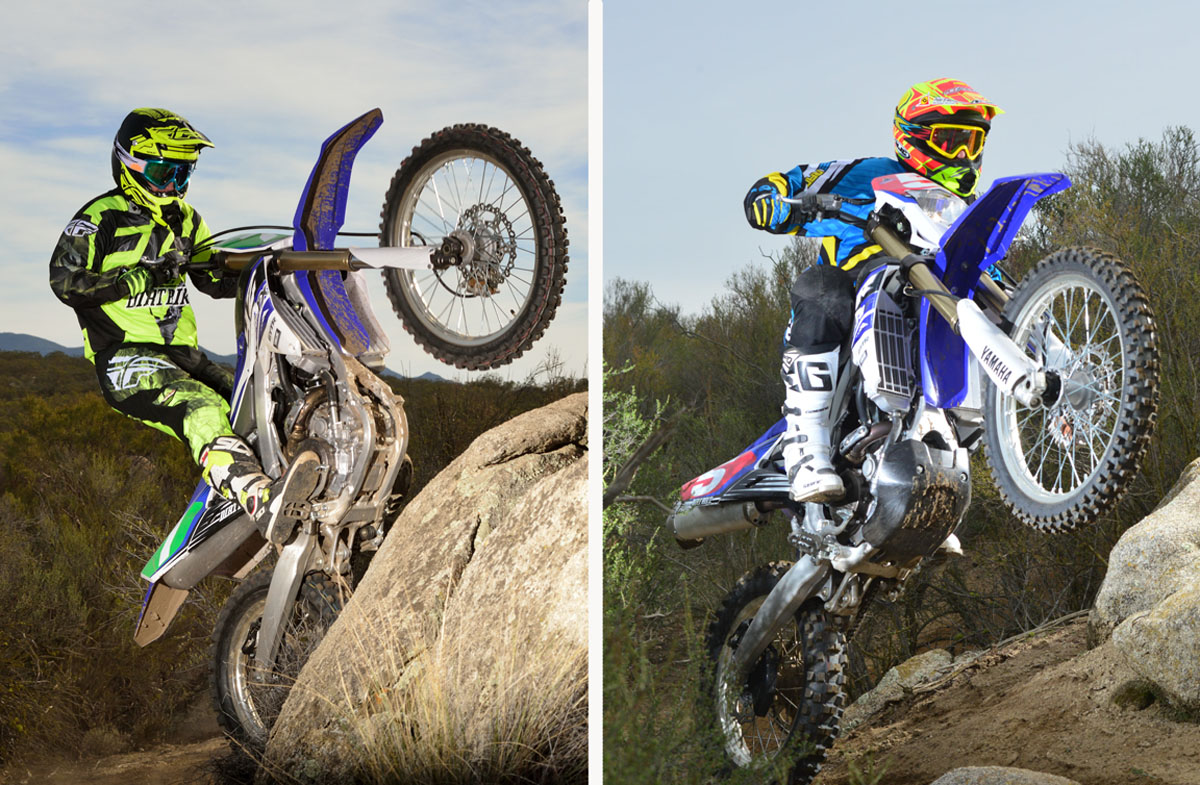 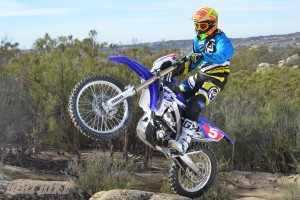 So far we have made a few modifications to the WR250, just to see what kind of potential it has. As we said, it was delivered with three modifications; the intake baffle was removed (this is riveted to the backfire screen), a YZ throttle stop was installed and a pea-shooter-like baffle was removed from the exhaust pipe. The very first thing we did was install handguards. Our knuckles are still skinned up from the first ride. Then we stole the black box from a YZ250F. Finally, we installed a DRD slip-on pipe, complete with spark arrestor.  We encountered one mystery along the way. The electric starter, fan and lights no longer function. We will find out if this is an side effect of the YZ black box or if it’s an unrelated problem and report back with an update on this page. Otherwise, the results were excellent. The performance of the modified WR surpassed that of the YZ250FX in several ways. First, it revved higher, and made more peak power. Second, the transition from throttle off to throttle on was smoother. The modified WR accepted gradual increased in throttle smoothly, whereas the stock FX was a little jerky on the bottom. The FX actually feels like it has more engine braking, because when the throttle is chopped off, the bike really stops. In theory, you should be able to make the FX run exactly like the modified WR with the Power Tuner, although it will take some trial and error. We don’t quite understand why the YZ black box allowed the WR to rev higher; this isn’t one of the reported differences between the YZ and the two off-road bikes. Also, the modified WR still doesn’t have as much peak power as a 2015 YZ250F motocross bike–although it is very close. Stay tuned, and we will report more as we learn more.