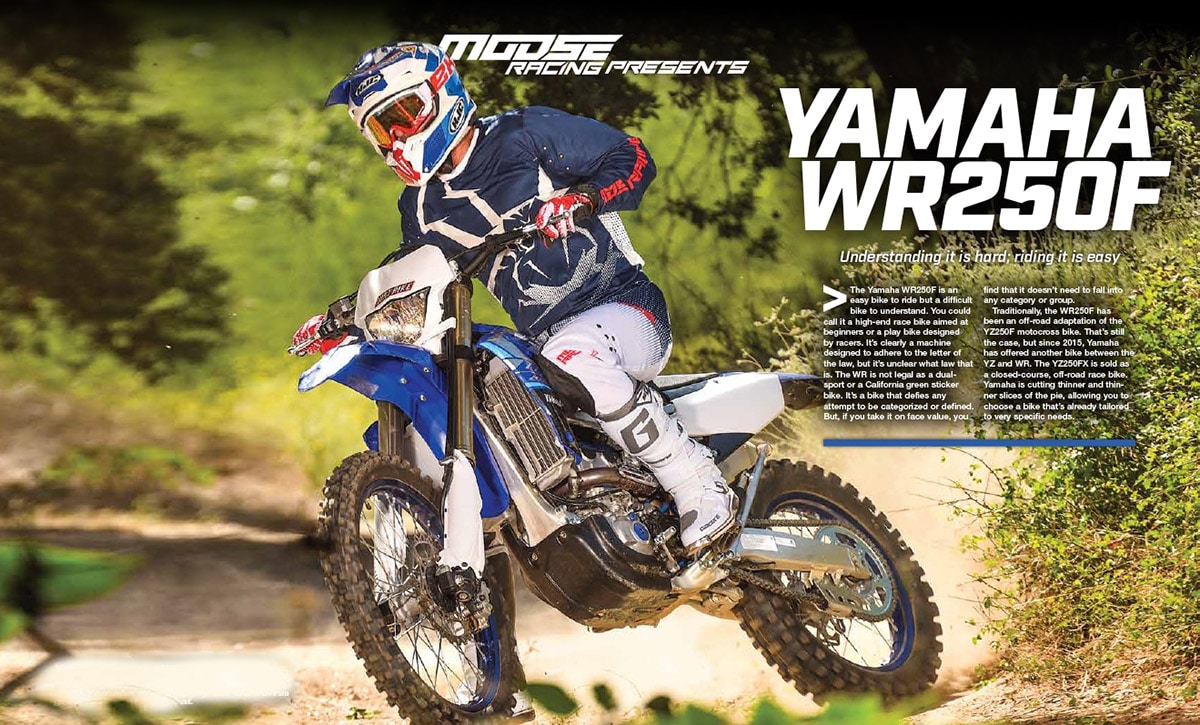 The Yamaha WR250F is an easy bike to ride but a difficult bike to understand. You could call it a high-end race bike aimed at beginners or a play bike designed by racers. It’s clearly a machine designed to adhere to the letter of the law, but it’s unclear what law that is. The WR is not legal as a dual-sport or a California green sticker bike. It’s a bike that defies any attempt to be categorized or defined. But, if you take it on face value, you find that it doesn’t need to fall into any category or group.

Traditionally, the WR250F has been an off-road adaptation of the YZ250F motocross bike. That’s still the case, but since 2015, Yamaha has offered another bike between the YZ and WR. The YZ250FX is sold as a closed-course, off-road race bike. Yamaha is cutting thinner and thinner slices of the pie, allowing you to choose a bike that’s already tailored to very specific needs.

SHARED DNA
For 2020, the WR has been completely redesigned, but we’ve seen all these parts on other models. It was only a matter of time before they showed up here. It’s based on the 2019 YZ250F, which was redesigned to follow in the footsteps of the 2018 YZ450F—that was the first of this generation. Everything is different from the previous WR250F; the reverse-head motor now has the electric start integrated within the cases more cleanly, and weight has been shaved off almost everywhere. The frame is quite different as well, although it still is a twin-beam aluminum design, and the suspension is still all KYB with the SSS coil-spring fork in front. To separate the two off-road versions from the YZ250F, here’s the short form.

As is always the case on planet WR, there is some mild uncorking to be done after you pick up the bike. It comes with a stop that only allows the throttle to open partway and with a secondary baffle within the already quiet muffler. We installed a YZ throttle stop and removed the inner baffle before riding the bike. As we said, the bike isn’t street-legal or green-sticker-approved, but it is EPA-certified at the federal level. With those two changes, we believe that it still would fall within the EPA’s guidelines for an off-road bike, but that’s not how it was certified.

THE WHISPER
First things first: the WR250F is wonderfully quiet. Even with the inner baffle removed, it’s as quiet as any dual-sport bike, at least when you hear it go by. The pilot might not realize how quiet the bike is, because he hears the intake noise of the upward-facing airbox. You get used to that quickly and the noise that everyone else hears is a whisper.
If you’re expecting the miracle of a quiet bike without a horsepower penalty, though, you’re going to be disappointed. The WR pays a steep price for its silence. The bike has a smooth, linear power delivery, but it’s no thrill-maker. Low-end power is much lazier than the competition models. It starts to catch up in the mid-range, but on top it falls off quickly. It still makes enough to be a good trail bike, which is the whole point. For most tight trails, too much power is a much bigger curse than not enough. The WR never stumbles, hiccups or stalls. It just goes forward without fanfare. To put it in perspective, it’s not quite as powerful as a 125 motocrosser but has a much longer, flatter power delivery.

That adds up to a bike that’s super easy to ride. It’s difficult to mismanage your shifting and clutch work. And, it always seems to have enough power to get the job done, whatever the job is. It can pop over big logs and shoot up greasy slopes. You might, however, pass on the next big hill-climbing adventure. That’s just not in the WR’s wheelhouse.

So, what happens when you combine an excellent chassis with such a mild motor? Handling magic! The WR chassis is virtually identical to the YZ250F’s, which everyone loves. It’s reasonably light (241 pounds without fuel on our scale), and it has that magic KYB suspension that Yamaha’s  dirt models are famous for. In the past, Yamaha went so soft with WR suspension settings that you couldn’t really tell how good it was. This version is still soft enough to be cushy on rocks and pebbles, but it doesn’t dive or bottom noticeably. The stock settings are decent for GP racing, and a novice or a vet could even take it out on a motocross course, as long as he didn’t go crazy on the big jumps. For general riding across a wide variety of terrain, we can’t imagine a better setting.
Overall handling is just like a YZ250F, which is to say it’s a long, low-feeling bike with slow, predictable manners. When you mix the smooth power delivery of the WR, you have a bike that never, ever does anything that you don’t see coming from a long way away.

THE NEXT STEP
The first questions are always about modification. The stock bike is perfect for some applications, but it lacks a certain fun factor. The people who designed the bike know that and have mapped out a whole agenda for those who want a little more spark. The first stop is the CPU from the YZ250FX, which Yamaha’s accessory division sells for $160. The stock unit is locked with EPA’s settings, whereas the competition status of the FX allows it to be tunable. The default settings are still off-road-oriented, but are designed to work with a less restrictive muffler, which is stop two on your list. Even if you don’t want to go competition loud, there are a number of aftermarket pipes on the market that are less aggressive. Next, if you really want to do some experimentation, you might think about the Wi-Fi transmitter that allows you to remap the bike with your smartphone. This is another $300, but it’s no gimmick; we have come to love that capability on the YZ competition bikes. There’s also a little more performance to be had with YZ cam timing.

If you’re going to do all that, why not get the YZ250FX in the first place? For us, the WR provides you with more overall capabilities. You can keep the stock muffler for riding in sensitive areas, because no aftermarket system will ever be that quiet. In some states, you can also license it for the street. For riding with your buddies on big bikes, you have your other configuration—full YZ mode. And with the WR, you get truly useful extras like the radiator fan, the headlight and the odometer. The WR is priced only $100 more than the YZ250FX ($8,499 versus $8,599). You get a lot of stuff for that.
Still, not everyone wants or needs that kind of versatility. For a general-purpose motorcycle, the WR250F is actually very specialized and is aimed at a very specific rider profile. If that’s you, hallelujah! It’s okay that the WR isn’t for everyone.