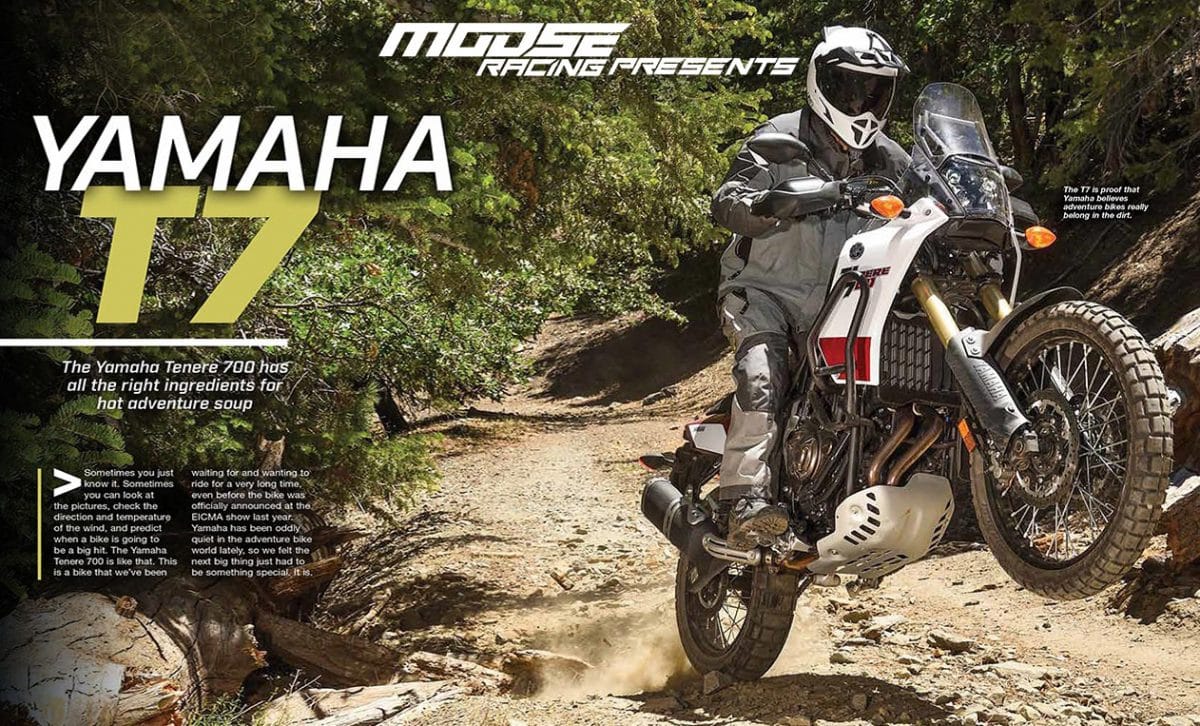 Sometimes you just know it. Sometimes you can look at the pictures, check the direction and temperature of the wind, and predict when a bike is going to be a big hit. The Yamaha Tenere 700 is like that. This is a bike that we’ve been waiting for and wanting to ride for a very long time, even before the bike was officially announced at the EICMA show last year. Yamaha has been oddly quiet in the adventure bike world lately, so we felt the next big thing just had to be something special. It is.

THE WIND
There are believers and nonbelievers in the adventure bike world. The believers point towards increasing ADV bike sales, increasing attendance at rallies and increasing downloads of adventure bike routes as proof that people really do take big multi-cylinder motorcycles on long off-road excursions. Non-believers say that people are buying into the image, not the practice. We began to think that Yamaha fell into the latter group despite the fact that the company won the very first Dakar Rally and is still the second most prolific winner of the event. That legacy hasn’t been reflected in the products at American Yamaha dealers. 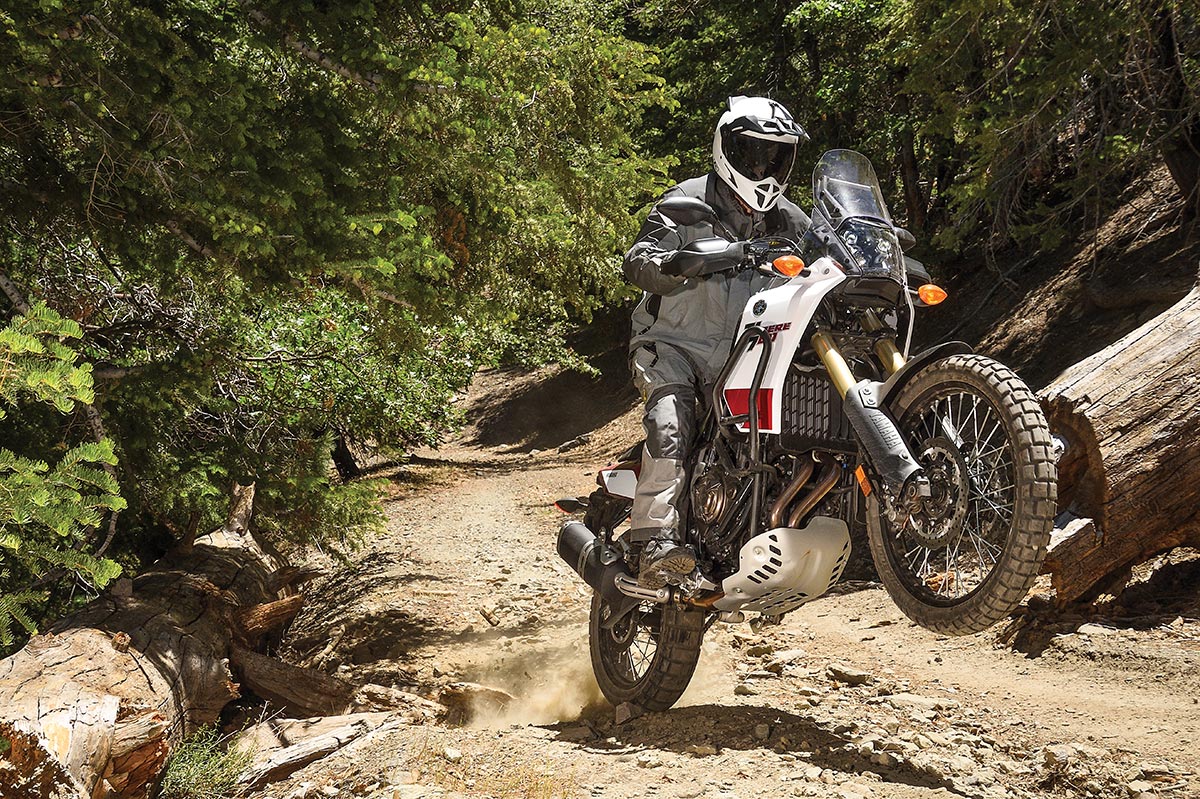 The T7 is proof that Yamaha believes adventure bikes really belong in the dirt.

Apparently, Yamaha now believes. The T7 could only be conceived by people who really do embrace the adventure bike lifestyle. It’s not suspension or power that makes the Tenere 700 so innovative, though; it’s the price. The MSRP just barely comes in under the $10,000 mark. The cost of most premium multis is what really keeps people out of the dirt. There simply aren’t that many people who want to put their $20,000 investment at risk of being damaged. Sooner or later, the prospect of dropping a 500-pound motorcycle in the dirt is a certainty. By pricing the T7 lower than many dual-sport bikes, it opens up adventure riding to a whole new social class.

There are, of course, some other inexpensive ADV bikes. They are, without exception, outsourced budget bikes from Vietnam, China and India. The Tenere 700 isn’t one of those. It’s made in Yamaha’s factory in Japan. There’s nothing else quite like it. The motor is based on the one in the MT07, which is a popular naked bike. To make it into an adventure bike, Yamaha gave it a whole new chassis with a more upright riding position, long-travel (8 inches) suspension, Brembo brakes, a big fuel tank and a small fairing. What it didn’t get tells you a little more about Yamaha’s positioning for this bike. It doesn’t have traction control, ride modes, hill-hold, wheelie control or electronic suspension. Outside of making the engine run, the only thing that the bike’s computer has to think about is anti-lock braking, which you can disable with the push of a button. This is a bike for the purist who doesn’t want to stress out about being stuck in the wrong setting, three menus deep in a complicated electronic portfolio. You put it in gear and go. It has a manual, cable-actuated clutch and a six-speed gearbox. The instrument panel hints at some electronic sophistication, but it’s still a fairly straight-forward black-and-white LED display.

LOTS OF MOTOR, GOOD SUSPENSION
The truth is, if you have a really good motor, electronic riding aids aren’t that important. The Tenere motor is outstanding. It combines the best characteristics of a small-displacement engine with the performance of a big bore. Low-rpm torque is super strong. In most situations, you have a choice of three different gears you can operate in. It pulls so well, you can put it in a tall gear and have your own traction control. We often complain that adventure bikes don’t have a low-enough first gear to deal with really tight, technical terrain. In this case, we found that we almost never use first gear. It doesn’t stall, and there’s very little engine braking. The motor has a 270-degree crank in what Yamaha calls a cross-plane two-cylinder configuration. That’s the same recipe that Honda uses for the Africa Twin. The reasoning behind the 270-degree offset between crank pins is that it results in more evenly spaced power strokes than a traditional 180-degree crank. In sheer performance, the 700 is pretty impressive. It will easily out-pull any big single, like a KTM 690, and will probably hang with most four-cylinder street bikes of similar displacement.

Yamaha clearly wants the Tenere to be taken off-road. It comes with Pirelli Rally tires, which are very off-road-oriented big-block tires, and they allow you to push the bike pretty hard on rough dirt roads that are littered with rocks and ruts. Riding any 500-pound motorcycle in the dirt requires an adjustment period, but it comes quickly on the Tenere. We lowered the tire pressure to around 27 psi and cranked up the suspension everywhere we could find a clicker. Standard settings for the fork are 11 clicks of compression and 17 clicks of rebound. You can go to 7 and 7 without any issue. In the rear, you can go from 15 to 7 clicks of compression and from 13 to 5 clicks of rebound. Preload can be cranked way up, depending on rider weight and luggage. Don’t be afraid to go as much as 10 turns. The suspension is just another factor that reaffirms Yamaha’s intent. The T7 is comfortable on dirt roads. Rocks and washboard are no issue.

ALL ABOUT COMMITMENT
When you stand, the riding position is dirt-normal, with wide, flat bars and well-positioned footpegs. When you sit, however, you fall into a hole that can be hard to climb back out of. The solution here is to simply avoid sitting down unless you have to. Yamaha also offers an optional rally seat, which is substantially thicker. Not only does it make the sitting-to-standing transition easier, but it positions you well. Most adventure bikes don’t allow sitting—ever. The fuel tanks are often so large that they push the rider too far to the rear and the bike won’t turn. A Tenere 700 with the thick seat handles more like a giant dual-sport bike when the rider is seated. Still, standing is always best in the dirt.

Like many adventure bikes with good off-road capability, seat height presents a big issue, especially for less experienced riders. Even before you install the Rally seat, the Tenere is tall enough to be intimidating. The bike’s center of gravity is decidedly higher than most bikes in this category. The motor has a large oil sump, which pushes the crankshaft higher for the sake of ground clearance. That, in turn, pushes the 4.2-gallon fuel tank up. If you have a full tank, the T7 can be a handful to manage at super-slow speeds and in rocks. To be fair, a high CG isn’t all bad. That actually contributes to the bike’s excellent stability at speed. That’s why it’s easier to balance a broomstick in the palm of your hand than a toothpick. Riding a big bike like this off-road is all about commitment; the more confident you are, the better. Overall, the bike rates right at the top of the list of adventure bikes with true off-road talent. You can tell that Yamaha’s testing department took its time with this one.

STREET TIME
Obviously, if you plan on riding dirt most of the time, there’s no advantage in a bike like the Tenere; you’re more of a dual-sport type of guy. When you have to cover ground on the pavement, though, the T7 earns its keep. The motor is smooth, sweet and fast. Top gear is tall enough that you can lope along at highway speed and feel like the motor is just idling. Wind protection is also good. The windscreen is too small to look through, but it does keep the air blast off your chest. Standard equipment is pretty good, with decent handguards and a large skid plate. As always, people can and will get more stuff when they buy the bike. Yamaha offers a Rally Pack with crash bars, a center stand, a larger skid plate and other accessories for an additional $1549. The Tour Pack has many of the same parts, with the addition of aluminum panniers for $2265. Still, the price is what makes the T7 so appealing in the first place. Nothing else in this category offers so much for so little. It throws open the gates of adventure and lets everyone in.