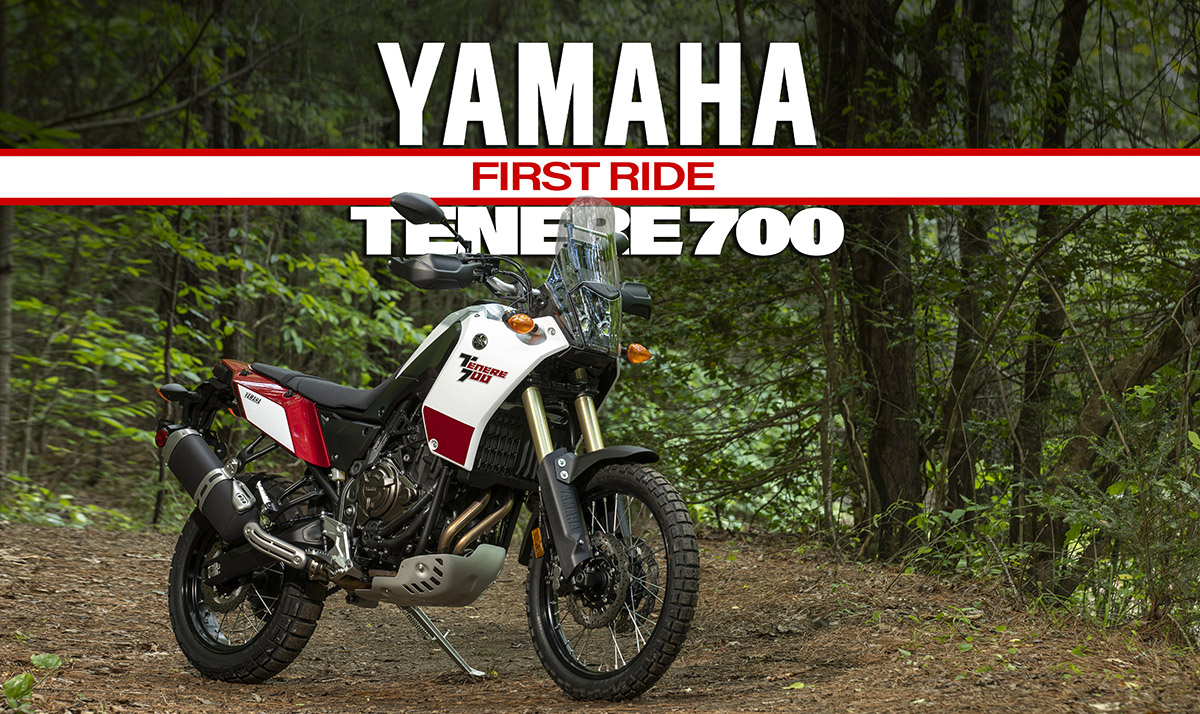 The Yamaha Tenere 700 has finally arrived and we got to spend a day on it in the San Bernardino mountains this week. This is a bike that we’ve been waiting for and wanting to ride for a very long time–even before the bike was officially announced at the EICMA show. Yamaha has been quiet in the adventure bike world lately, which is especially odd because the company was way out in front in the early years. We figured that Yamaha’s next ADV bike was really going to be something special.

The Tenere 700 is special. It’s a totally committed adventure bike with real off-road capability as its primary calling card. These days, you can’t just put a beak and high bars on a street bike and expect it to be accepted by the guys who really ride these things in the dirt. Last week’s introduction ride covered more than 50 miles of off-road riding on every kind of terrain that you can reasonably expect to encounter in an off-road rally.  We also got to ride it on at least that much pavement and when it was over, we wanted more.

The Tenere 700 was designed to fall between high-dollar prestige bikes and out-sourced budget bikes. It’s made in Yamaha’s factory in Japan, not Vietnam, not India and not China, but it still sells for less than $10,000 ($9999). There’s nothing else quite like it. The motor is based on the one in the MT-07, which is a naked bike that the street press seems to love. To make it into an adventure bike, Yamaha gave it a whole new chassis with a more upright riding position, long travel  (8 inches) suspension, Brembo brakes, a 4.2-gallon fuel tank and a small fairing. What it didn’t get tells you a little more about Yamaha’s positioning for this bike. It doesn’t have traction control, ride modes, hill-hold, wheelie control or electronic suspension. Outside of making the engine run, the only thing that the bike’s computer has to think about is anti-lock braking, which you can disable with the push of a button. This is a bike for the purist, who doesn’t want to stress out about having the wrong setting that’s three menus deep in a complicated electronic portfolio. You put it in gear and go. It has a manual, cable-actuated clutch and a six-speed gearbox. The instrument panel hints at some electronic sophistication, but it’s still a fairly straight-forward black-and-white LED display.

The truth is, if you have a really good motor, electronic riding aids aren’t that important. The Tenere motor is outstanding. It combines the best characteristics of a small-displacement engine with the performance of a big-bore. Low-rpm torque is super strong. In most situations, you have a choice of three different gears you can operate in. It pulls so well you can put it in a tall gear and have your own traction control. We often complain that adventure bikes don’t have a low enough first gear to deal with really tight, technical terrain. In this case, we found that we almost never use first gear. It doesn’t stall and there’s very little engine braking. The motor has a 270 degree crank in what Yamaha calls a cross-plane two-cylinder configuration. That’s the same recipe that Honda uses for the Africa Twin. The reasoning behind the 270-degree offset between crankpins is that it results in more evenly spaced power-strokes than a traditional 180-degree crank.

In sheer performance, the 700 is pretty impressive. It will easily out-pull any big single, like a KTM 690 and will probably hang with most four-cylinder street bikes of similar displacement. The big question, of course, is if it will keep up with its closest rival in the adventure bike world, the KTM 790. Without riding the two back-to-back, we can only say that the Yamaha feels like it’s more focused on low-rpm power and that the KTM is more of a revver. Both are outstanding.

Yamaha clearly wants the Tenere to be taken off-road. It comes with Pirelli Rally tires, which are very dirt oriented big-block tires, and they allowed us to push the bike pretty hard on rough dirt roads that were littered with rocks and ruts. Riding any 500-pound motorcycle in the dirt requires an adjustment period, but it came quickly on this ride. We lowered the tire pressure to around 27 psi, and cranked up the suspension everywhere we could find a clicker (compression and rebound at both ends, plus a few turns of rear spring preload). When you stand, the riding position is dirt-normal, with wide, flat bars and well-positioned foot pegs. When you sit, however, you fall into a hole that can be hard to climb back out of. The seat is understandably low to offer some confidence to less-experienced riders. The solution here is to simply avoid sitting down unless you have to. Yamaha also offers an optional rally seat which is substantially thicker. Even riders of average height should consider this. Not only does it make the sitting-to-standing transition easier, but it positions you well. Most adventure bikes don’t allow sitting–ever. The fuel tanks are often so large that they push the rider too far to the rear and the bike won’t turn. A Tenere 700 with the thick seat handles more like a giant dual-sport bike when the rider is seated. Still, standing is always best in the dirt. 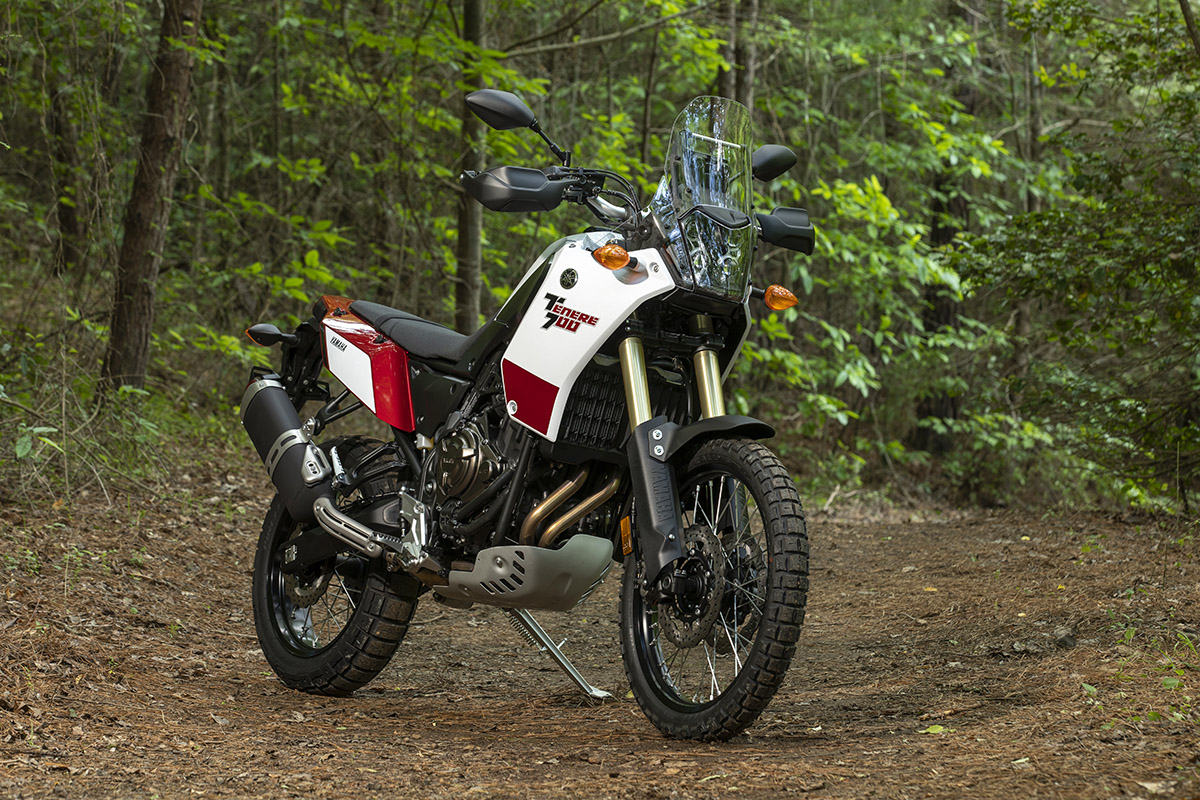 If you start going too fast, you have to deal with the physics of mass and momentum, just like any ADV bike. The Yamaha is still big enough to require respect. The suspension isn’t as firm as some of the more dirt-oriented adventure bikes like the Africa Twin and the KTM 790. When you grab a handful of front brake, the Brembo twin discs will stop in a hurry and the fork will dive hard. If there are big bumps too, you’ll use up all the suspension and want more. Still, the bike rates right at the top of the list of adventure bikes with true off-road talent. You can tell that Yamaha’s testing department took its time with this one. It’s even fairly crash resistant. We know; ours hit the ground and there was almost no visible damage. Just pride.

We see the Tenere 700 as evidence of a very good trend. Not long ago, adventure bikes were all about image. Now, there are so many riders who attend rallies and really cover distance via dirt roads, the bikes have to offer real substance. We’re going to keep riding the Tenere 700, so check back as we learn more.