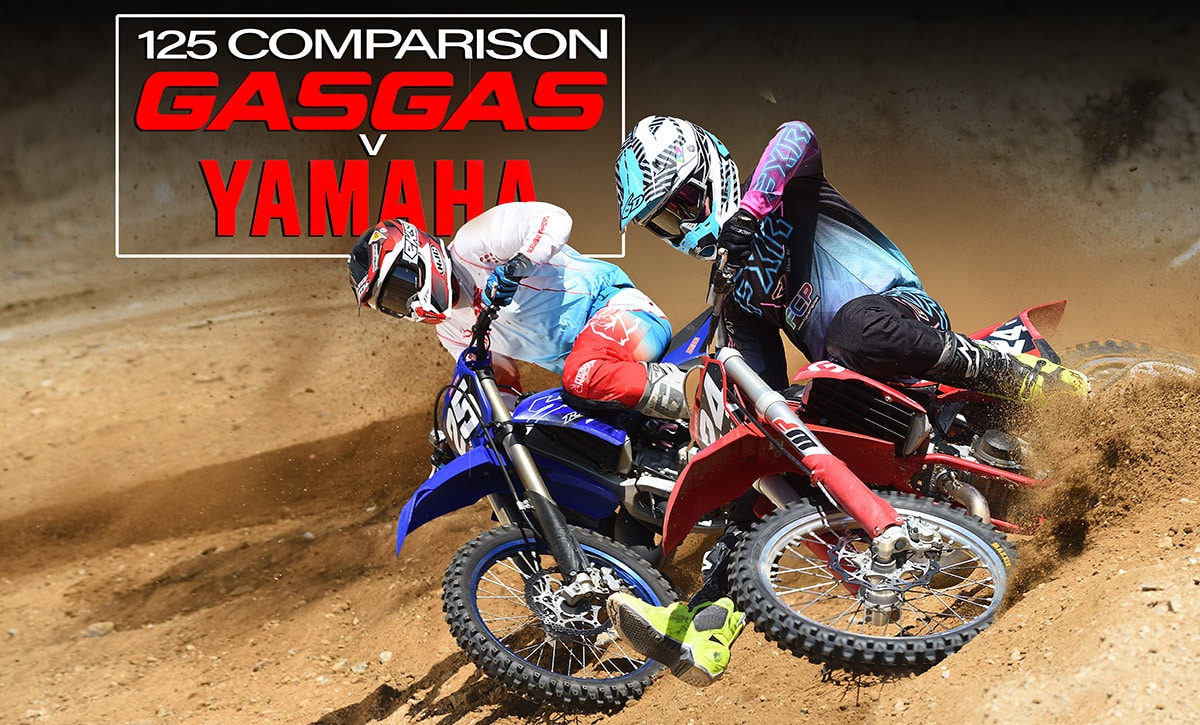 We now accept that back in 2007 most of the motorcycle industry lost its collective mind. That was when Suzuki, Honda and Kawasaki stopped making 125 two-strokes. Only Yamaha and KTM stayed in the game, but with very limited commitment. Now the commitment has returned. It should have been obvious all along that 125 two-strokes provide young riders with an affordable bridge to the world of full-size motocross bikes and provide a way for experienced riders to indulge in the sport for pure fun. The 2022 Yamaha YZ125 and GasGas MC125 show that the industry has come around. Both bikes have new technology, both have state-of-the-art components, and both have the exact same price—$6899. That’s about half the price of the most expensive motocross bikes on the market right now.

GasGas is the junior member of the Pierer Mobility motorcycle group. That’s the parent company of both KTM and Husqvarna, and all three brands offer a 125 two-stroke based on the same engine and frame. The GasGas MC125 is aimed directly at the Yamaha YZ125; the others have higher prices and different components.

In truth, there are only a few differences between the GasGas and the others in its family. The MC125 has a cast triple clamp rather than a machined one. It has Maxxis tires, an unbranded silver handlebar and unbranded silver rims, whereas Husky and KTM use name-brand stuff. The bodywork and airbox are completely different, and there are a number of purely cosmetic items. The parts that are the same across the three brands are more important. The GasGas has Brembo brakes and a Brembo hydraulic clutch, just like the KTM and Husqvarna. It also has the same WP suspension components, including the Xact air fork. The valving at both ends is softer in keeping with the company’s plan to target younger riders.

The motor for the GasGas is exactly the same as that of the Husky and GasGas, right down to the jetting in the Mikuni TMX38 carburetor and all the gear ratios. It uses a case-reed motor with a mechanical power valve that has limited adjustment as to when it opens and how fast it opens. For 2022, the GasGas MC125 is unchanged from the 2021 version, which was its inaugural year. The 2023 model was announced early, and it is again unchanged.

Yamaha can lay claim to the fact that no dirt bike has been in production longer than the YZ125. Today’s version, of course, is completely different from the one that was available 49 years ago, but it’s strikingly similar to the one from 17 years ago. That was when it got the aluminum frame, which it still uses, and the motor that was in production until this year. If you look at the 2022 YZ125 engine, you can be forgiven for not noticing it’s different, but virtually all the parts are new, including the cylinder, head, piston, piston pin, connecting rod, crankcase and expansion chamber. The top end is tilted 4 degrees farther forward, and a Moto Tassinari reed cage is now standard. The carb is a more visual clue that things are different. It’s now a Keihin Powerjet like the one that comes on the YZ250. A separate fuel jet is wired into the ignition to provide more fuel between 5000 and 9500 rpm when the throttle is over half open. The transmission has been beefed up, and the ratios for fifth and sixth are a little taller. The rear sprocket also is 1 tooth larger.

The frame itself is unchanged, but the swingarm, linkage, subframe and airbox have all been redesigned and wrapped in new bodywork. Yamaha made a serious effort to give the bike a more current feel, meaning a flatter rider compartment and narrower shrouds. Along the way, the bike lost a little bit of fuel capacity—from 2.1 gallons to 1.8. As for the suspension, it is still very similar to the current four-stroke stuff. The fork is a KYB SSS coil-spring unit, like that of the YZ250F, but with smaller axle carriers on the bottom. The springs are stiffer this year, at 4.2 N/mm in front and 48 N/mm in the rear.

Some people claim they don’t like 125 two-strokes. Warning: stay away from them. These are seriously unbalanced people who will someday commit a heinous crime. For normal riders, there’s nothing more fun than screaming a good-running 125 around a motocross track. Both bikes are good-running 125s.

As you might expect, Yamaha found more power. Previously, the bike had a significant handicap in peak output. That didn’t really mean much to the YZ faithful, because it was so easy to ride and handled so well. The new version is noticeably faster on top than the old one. Okay, it isn’t a huge difference, but in back-to-back comparisons with a brand-new 2021 YZ125, the new bike has a clear advantage from the middle of the powerband all the way to peak—and then some. The new bike will keep on pulling without falling on its face. It isn’t an across-the-board win/win situation, though. Down low, the previous YZ125 was stronger. If you get to that part of the powerband, you’ve already messed up. The new bike is stronger in the areas that matter. You can recover a little of that power with rejetting. The new Keihin carb is a little fat down low. It runs better with the needle one notch lower.

Despite the gains that Yamaha made with this new motor, it’s still no match for the GasGas. The Austrian motor has a little more bottom, a little more mid and a lot more top. The new Yamaha motor will fall short in any head-to-head comparison. That’s no deal breaker, but if you were expecting the new motor to bridge the gap, you’ll be disappointed. It only gets halfway there. Ironically, the old YZ motor at least had one zone where it was superior to the GasGas—way down low in the off-power zone. Now they’re about the same down there.

The GasGas motor, on the other hand, is about as good as a 125 two-stroke gets. It’s smooth from the bottom up and has decent over-rev. Many riders even prefer this to the KTM 150SX. That motor makes more peak power, but it hits harder and doesn’t rev as high, making it more demanding to ride. The GasGas 125 is fast enough and much more friendly. The MC125 is just as easy to ride as the new Yamaha but with more power available.

The one area where the Yamaha has a significant advantage is suspension. You’ve heard it again and again: The KYB coil spring fork that is used across the entire YZ line is excellent. The setup for the 125 is a little stiffer this year, which is consistent with Yamaha’s target of attracting a more experienced rider. With a little adjustment, even riders in the 120-pound range can get away with the stock spring and valving. For that matter, a 170-pound rider can also find a setting that will work. That’s the true strength of the Yamaha fork; it has the capability of pleasing a very wide range of riders. Same with the rear, although that’s a much easier job. One of the things that makes a 125 two-stroke so much fun is that you can get away with murder. If the back end gets sideways, you just gas it harder and it comes around. Things rarely get out of hand.

You would think that the GasGas would be able to satisfy an even wider range of riders because it comes with a WP Xact air fork. In truth, we have found that you don’t need to stray far from the recommended air pressure of 8.3 bar (120 psi). It’s more effective to use compression damping (at the top of the left fork leg) for incremental changes. No matter what you do, though, the GasGas is never quite as plush as the Yamaha. It’s certainly not harsh, but anything suffers by comparison with the YZ.

In the past, we have said that the Yamaha YZ125 is the best-handling motocross bike in the world. When you put excellent suspension on a bike that only weighs 203 pounds and has less than 38 horsepower, that’s the inevitable result. The GasGas MC125 comes very close to making us reconsider; it is, after all, 8 pounds lighter and will actually cut a tight turn with even less effort. Still, we have to award the World Handling Championship to the Yamaha once more. It’s a more stable machine, and the new layout makes it feel a little more modern.

The overall championship is another story. Between these two bikes, the GasGas is still a more competitive racer. It simply has too much of a horsepower advantage to be ignored. In the 125 class, lighter and faster is always a tough combination to beat. Now, it’s simply a much closer contest.