X-FIGHTERS US ROUND A BLOW OUT 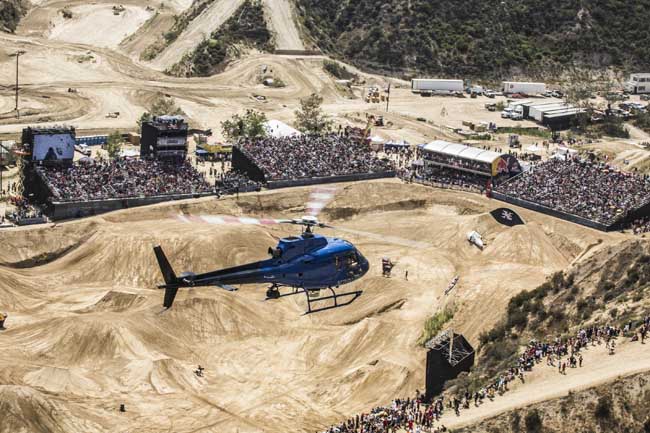 Australia Rob Adelberg won the third stop of the 2013 Red Bull X-Fighters World Tour by virtue of his victory in qualifying earlier on Saturday after heavy, gusting winds caused the cancellation of the finals. France’s Tom Pages was second and moved ahead of Spain Dany Torres in the overall standings halfway through the season.

GLEN HELEN, California (USA)  Rob Adelberg scored his first Red Bull X-Fighters career victory on Saturday in Glen Helen thanks to his thumping triumph in the Qualifying session, taking top honors when heavy winds caused the cancellation of the main event. The wind gusts of up to 20 mph made the already challenging track too dangerous for the world’s best freestyle motocross riders. Tom Pages took second place on the biggest Red Bull X-Fighters course ever built, moving back into the overall World Tour lead with 245 points, ahead of Dany Torres (210). Japan’s Taka Higashino finished third before his home race next month in Osaka, Japan.

The strong winds had forced the postponement of Qualifying from Friday afternoon to Saturday morning. Adelberg, who has a hot hand at the moment and just won the silver medal in Moto X Freestyle at the X Games in Brazil, had a brilliant first run in Qualifying with a perfect cliff-hanger flip, getting 85.1 points. That was more than enough to beat Pages (83.8 points) into second and Higashino into third (83.6 points). Torres, the 2011 World Tour winner, struggled on the treacherous course in Qualifying and could finish no higher than seventh.

“I started my run with one of the hardest tricks I’ve ever done – the cliff-hanger flip – and it was the best I’ve ever done’ said Adelberg, 24, a tough-as-nails rider who broke his jaw in Glen Helen last year but still managed to finish sixth. His previous best was second in Dubai in 2012.

Torres was disappointed that the knock-out rounds were cancelled. ‘The wind was also blowing in the morning during the Qualifying,’ he said. The riders jump up to 15 meters high on their motorcycles and are airborne for distances covering up to 30 meters. Crew members had worked heroically to build the Glen Helen FMX course, moving tons of dirt and building an entire event infrastructure to accommodate the capacity crowd of 15,000 spectators.