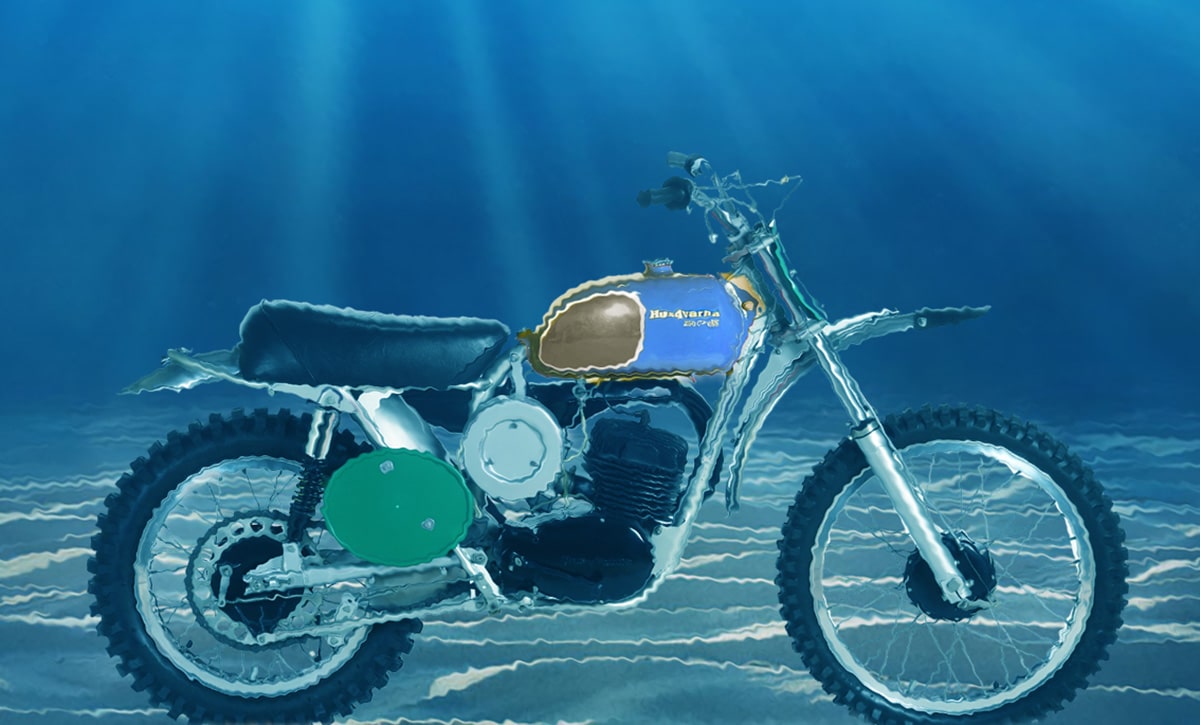 In honor of Dirt Bike‘s upcoming 50th anniversary, we have been featuring classic stories from past issues. The May, 1974 issue featured a very interesting motorcycle, although it was somewhat buried in that issue. It was the prototype Aquavarna amphibious dirt bike. It should be noted that no other references to that bike have been found, before or since. Here it is, with no claims of its authenticity, the story of the 1974 Aquavarna 450, as written by staffer George Wegner.

It seems that someone has finally come up with a surefire waterproofing technique. In the town of Ann Arbor in Michigan, there lives a man so dedicated to the sport he loves that he has spent more sleepless nights than he cares to recall just diligently working in his shop.

He has not only found the best method for waterproofing, but he has found a way to mix the best of both of his worlds: riding his bike in the dirt and scuba diving. The thought of doing them both at the same time inspired him past mere genius. That man is Peter “Gills” Dill.

Realizing his greatness in this, his finest creation, he decided that the world should know. His signs of genius shine on into the night. He knew that the only way to get a fair evaluation of his brainchild was to give it to the “MASTER TESTERS” at DIRT BIKE.

Needless to say, our pants were wet at the chance to test this fine example of Ann Arbor ingenuity. We decided to meet at Lake Michigan for a test session. You will note in the photos that the scuba regulator is interfaced with the rider (Gills) and a second hose coming from the regulator connects directly to his specially modified Husky air box. This enables the bike to be ridden completely submerged. He decided to use his Husky for the prototype because it seemed to be as afraid of water as his cat. Hence the name Aquavarna 450 UB (Underseabike).

The base for his waterproofing goo (he refuses to reveal the exact formula) is Elmer’s Glue and malted milk balls. No less than four 55-gallon drums of WD-40, scattered about his workshop, give cause for us to suspect that he has very close ties with this company. We further suspect that this is the most important ingredient in his concoction.

Test day: a quick fist fight helped us to decide who would be the first to go under. I fired up the “Aquy” and opened the valve on the regulator. Due mostly to excitement, in this my first great underwater adventure, I had forgotten to start breathing through the mouthpiece and gagged slightly on the thoroughly polluted lake water. Onward and downward, bubble, bubble, bubble …

My first sensation was one of slow. motion. Which indeed it was. Because of the tremendous force of the water, our test bike was geared extremely low. Although I was just getting on the pipe in fourth, according to the instruments I was doing only 14 knots. The gearing seemed just right. When I was tapped out in fifth, the force of the water was about to wash me off the seat. Far out. Just the thing to keep my arms in shape.

Traction could only be described as fantastically moist. As I dodged old car bodies and Suzuki 400s lying peacefully on the bottom, I looked back to see 40-foot rooster tails suspended in the water like curtains. Beautiful!

Launching myself off a sand bar, I found I had time to execute several aquabatic maneuvers. We must invite Jacques Cousteau to film our next test session. I’m sure he would be happy to help Gills in designing a streamlined underwater fairing.

Every small ledge, giant clam or sand dune was used as a berm. The technique I found easiest for turns was to plow deep into the muck and crack the throttle wide open. This lifted the front wheel so that you could lean the bike over and set it down in the direction in which you wished to travel. It’s truly a beautiful experience. All in slow motion, of course.

Crashes (wipeouts) were especially fun and quite painless. You would merely settle to the bottom. This inspired a really berserk riding style. Frantic!

I was having such fun that I forgot about the time. I surfaced with enough air for only about half of a lap on our new underwater test course.

Before long, we had all gotten in three air tanks’ worth of riding under our weightbelts. Then we crowded around Gills’ wet dream and proceeded to discuss power and handling characteristics. It was our unanimous opinion to attach fins or rudders to the back side of each fork leg to aid in cornering stability. This addition, along with Gills’ suggestion of using AquaVelva instead of fork oil, helped handling at all speeds greatly.

Anyone interested in preparing their scooter for underwater competition, please contact Peter here at DIRT BIKE. He has agreed to join our staff as “Special Underwater Consultant and Test Editor.”

We feel that he will be very helpful when the wave of popularity for this new sensation hits us. In the near future, he and Rondo Talbot will be opening a new cycle park off the coast of Delaware. The course can be found directly under the path of the Cape May-Lewes ferry. You can’t miss the sign: Neptune’s Cycle Park.

They may close the deserts, but we still have the oceans, the seas, the lakes, the rivers. 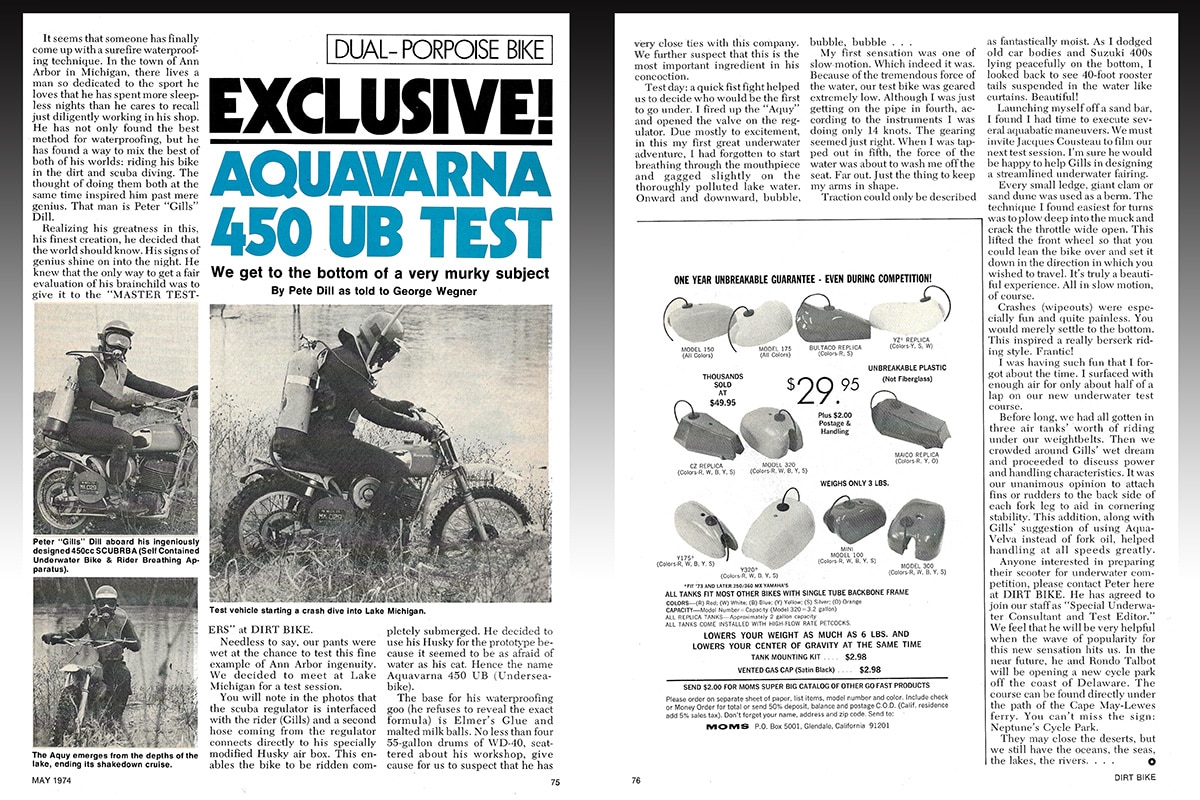